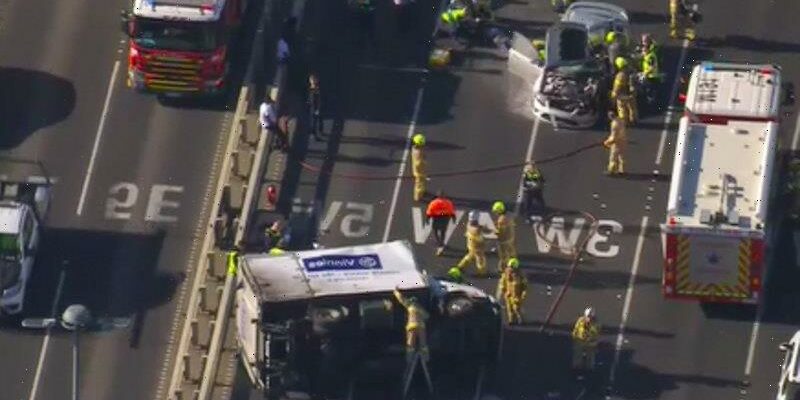 A serious collision on the West Gate Bridge has closed outbound lanes and is expected to cause delays for the coming hours.

The incident left a silver sedan facing the wrong way on the bridge and a van on its side. 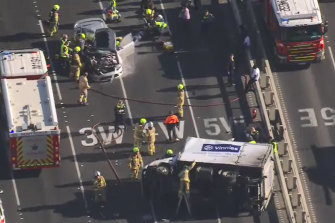 A truck rollover and a silver sedan are involved in an incident on the West Gate that has closed outbound lanes. Credit:Nine

Police have closed all outbound lanes at Montague Street, and the Department of Transport is advising motorists to avoid the West Gate Bridge.

Department spokesman Chris Millar said he expected the closures to last for “at least a couple of hours”.

“[The lanes] will only be open once the mess is clear and investigations complete,” Millar said.

The department is urging motorists to detour through the CBD and West Melbourne using Montague Street, Wurundjeri Way and Footscray Road, or north of the city through Carlton, Parkville and Flemington to reach Geelong Road and the freeway.

A motorist told 3AW he was travelling outbound across the bridge when a silver car passed him at speed.

“It was like watching a video game. He was driving like a lunatic,” the caller named Harry, said.

Citybound traffic was queued back to the M80 Ring Road on Tuesday morning, while there were significant delays for outbound motorists exiting the Monash Freeway through the Domain Tunnell to Montague Street.

Millar said the scene was “very confronting” and said people could find support through the Amber Community, formerly known as Road Trauma Support Services, on 1300 367 797.