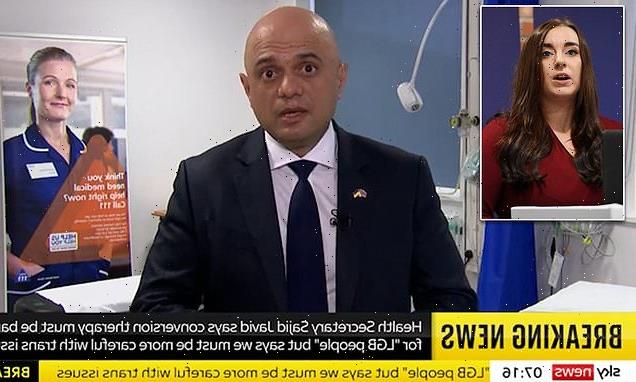 A Tory split over trans conversion therapy deepened today as the Scottish arm of the party had it would go against the UK party to support a ban.

Boris Johnson is facing stiff resistance from the backbenches over a decision to allow the practice to continue, despite reluctantly agreeing to outlaw it for gay people.

In a messy double-U-turn last week he backtracked on a pledge to make the often religiously driven abuse illegal, only to swiftly revert to his original plan when faced with criticism.

But the ‘therapy’ for trans people will still not be outlawed, in England at least. Wales has indicated it could unilaterally move to bring in a ban.

And now the Scottish Tories have said they would support as ban if one was introduced at Holyrood.

The party’s gender reform spokesperson, Meghan Gallacher said: ‘As our manifesto for the 2021 Scottish Parliament election made clear, we are in favour of a ban on the abhorrent practice of conversion therapy.

It came as Health Secretary Sajid Javid defended allowing the practice to continue. When pressed on why a ban had been removed from the bill for the Queen’s Speech, he told Sky News: ‘When it comes to conversion therapy, it is absolutely right, as the Government has said, that we ban the so-called conversion therapy for LGB people. When it comes to trans, I do think that we need to be more careful.’ 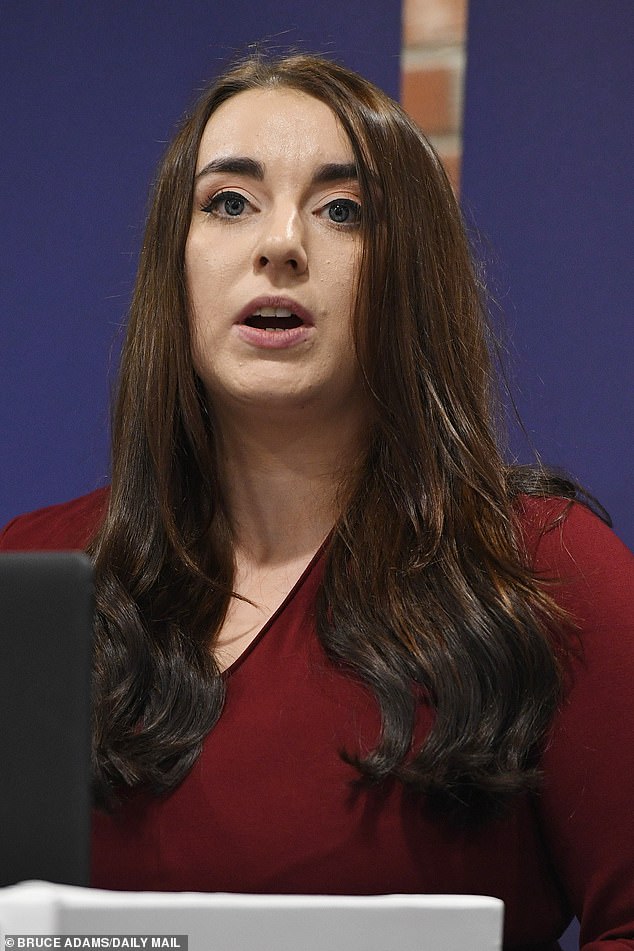 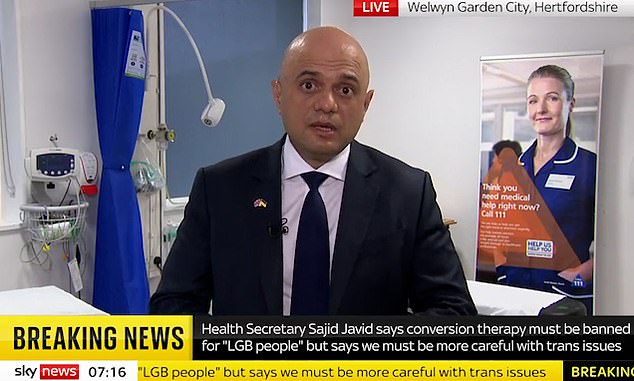 The Health Secretary pointed to the interim report written by Dr Hilary Cass, saying: ‘She talked about how children and young people when they say they have gender dysphoria, it is right for medical experts to be able to question that and to determine what the cause might be.

‘Is it a genuine case of gender identity dysphoria or could it be that that individual is suffering from child sex abuse, for example, or could it be linked to bullying?’

Plans for London to host an international conference on LGBT issues were in tatters last night amid the row over transgender conversion therapy.

A government source said the Safe To be Me summit, originally scheduled for June, is set to be scrapped after more than 100 LGBT and HIV groups pulled out over ministers’ failure to ban trans conversion therapy.

His resignation follows attempts to introduce a legal ban on the abhorrent practice of claiming to ‘convert’ gay people to heterosexuality.

While this particular proposal has been widely welcomed, some expressed concerns over the new law also preventing therapists from helping children with ‘gender dysphoria’ to decide whether they really want to transition.

Campaigners warned the legislation was so badly drafted that teachers could end up in court if they do not let boys play in girls’ sports teams.

But more Tories broke cover to support a ban on trans therapy. Gay MP William Wragg last night tweeted: ‘If banning conversion therapy will stop the likes of me being subjected to mental cruelty in repressing my true self, why not so for someone who is trans?

‘I can see no logic in excluding trans people from legislation banning conversion therapy. Let’s have some empathy.’

In his letter to the PM, Mr Anderson said serving as the UK’s first LGBT business champion had been ‘the greatest privilege of my life’ – but he felt he had ‘no choice’ but to resign. Learning that trans people ‘would be excluded from the legislation and therefore not have the same immediate protections’ was ‘deeply damaging to my work’, he wrote.

Mr Anderson added that it was ‘profoundly shocking’ that the Government had apparently backtracked on protection for transgender people in the same week that Jamie Wallis became the country’s first MP to come out as transgender.

Mr Wallis, who will continue using he/him pronouns ‘for the time being’, has said it would be a ‘broken promise’ to ban gay – but not trans – conversion therapy.

The MP for Bridgend, who revealed on Twitter that he had been diagnosed with gender dysphoria, said it would be ‘wrong to exclude protections for a whole group of people’.

A government spokesman said last night: ‘We thank Iain for his contributions as LGBT business champion. The Government has a proud record on LGBT rights and we remain committed to building upon that work with sensitivity and care.’