‘Boris’s life hung in the balance but a family row wasn’t far away’: When PM was hospitalised with Covid, his relationship with ex-wife Marina’s children was strained… while his sister Rachel rowed with their father Stanley, writes TOM BOWER

One week into Boris Johnson’s campaign to take over from Theresa May as Prime Minister last year, long-standing differences of opinion among his team erupted.

Lynton Crosby, the strategist who had masterminded his victory as London Mayor, was frozen out by Boris’s partner Carrie Symonds, who was convinced he had orchestrated her recent departure from Conservative Central Office as well as a run of negative media stories.

Instead, Boris decided that Dominic Cummings was critical to his campaign and his potential premiership.

A controversial figure, Cummings has been described by David Cameron as a ‘career psychopath’, by senior Tory Oliver Letwin as ‘an unelected foul-mouthed oaf throwing his weight around’, and by John Major as ‘an aggressive bully’.

For Boris, importing Cummings added fuel to the fire. 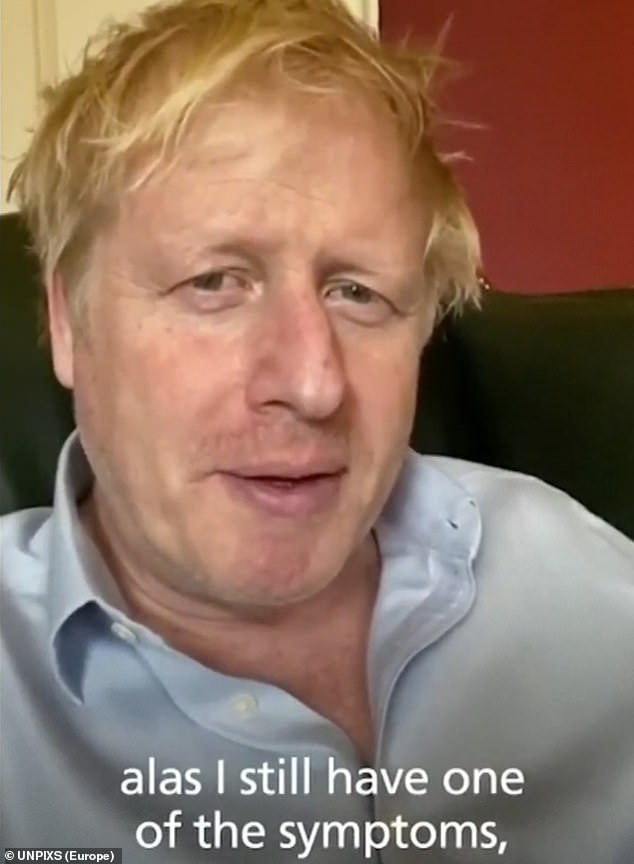 On the morning of July 23, the result of the Tory leadership election was announced. Boris had won 66 per cent of the vote.

As the new Prime Minister came down from the stage at the Queen Elizabeth II Centre in London, he walked towards his family in the front row.

There was a double-kiss for his sister Rachel, a warm glance at his younger brother, Jo, but a firm rejection of his father Stanley’s outstretched hand.

At his moment of supreme triumph, Boris refused his father’s congratulation – a private reminder that Stanley had ignored his children when he was needed.

George Osborne had once joked that Boris always dreamed of addressing the entire nation on TV.

But in his wildest dreams Boris could not have imagined that more than 27million Britons would watch him at 7pm on Sunday, May 10, as he updated them on the country’s response to coronavirus.

That was more than had watched the London Olympics Opening Ceremony and even William and Kate’s wedding. Boris’s credibility depended on a similar chorus of approval.

Instead, at 7.14pm, the nation was left confused. Few understood whether schools would reopen, how care homes would be protected, and when the coronavirus lockdown was ending.

His first address to the nation had come on March 23, when he announced a total lockdown. (He refused to use the word ‘lockdown’ itself, which he thought was ‘draconian’ and implied ‘captivity’.)

On Sunday, April 5, it was decided that his life was in danger, and he was taken to St Thomas’ Hospital. Some reflected that if he had still been with his ex-wife Marina, he would have been in hospital days earlier.

Within minutes of his arrival, the medical team pumped him with anticoagulants, antivirals, antibiotics and litres of oxygen to save his lungs, weakened years earlier by a dose of pneumonia.

‘An hour later,’ a doctor subsequently told him, ‘and you could have been dead.’

Even so, with Boris moved into intensive care, he was fighting for his life. It was touch-and-go whether he would need to be put on to a ventilator, implying at best a 50 per cent chance of survival. 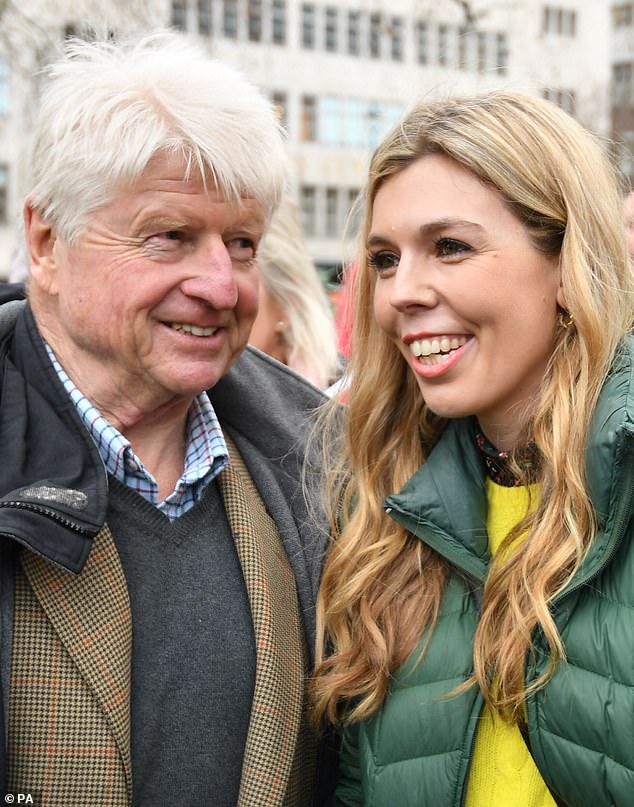 The Johnson family were told the truth – but as ever, a family meltdown was never far away.

About six months previously, Boris’s brother Jo, a Remainer, had resigned as Universities Minister, citing an unresolvable tension between family loyalty and the national interest.

There had been the tension, too, between Boris and Marina’s children and his father after Stanley was spotted on TV engaged in friendly conversation with Carrie Symonds at the Tory Conference in Manchester.

Stanley and Boris’s sister Rachel knew that over the next hours the PM’s children should see their father, possibly for the last time.

Since Marina refused to speak to Stanley, Rachel needed to phone her about Boris’s condition.

Without a mobile phone signal at her house in Exmoor, she wanted to use the land line in Stanley’s neighbouring home. An enormous argument erupted about Rachel entering the house.

Her trips to London, she was told, risked importing the infection. She should stay away from Stanley’s house.

Eventually, reason prevailed. Marina was given the news. Some of her and Boris’s children, still estranged from their father because of his treatment of their mother, went to the hospital.

In Downing Street, Boris’s closest aides were shocked. Some cried. ‘I fear the worst,’ sighed a supporter, convinced the end was just hours away. Obituaries were rapidly commissioned.

For three days in intensive care, Boris was bombarded by oxygen and drugs.

‘It was a tough old moment,’ Boris later admitted. ‘I won’t deny it. They had a strategy to deal with a ‘death of Stalin’- type scenario. I was not in particularly brilliant shape and I was aware there were contingency plans in place.’

Three days later, friends were told he had eaten a jacket potato and baked beans. He had survived. On Easter Day, April 12, he left hospital.

In the early days of his premiership, Boris’s mother was his trusted confidante. 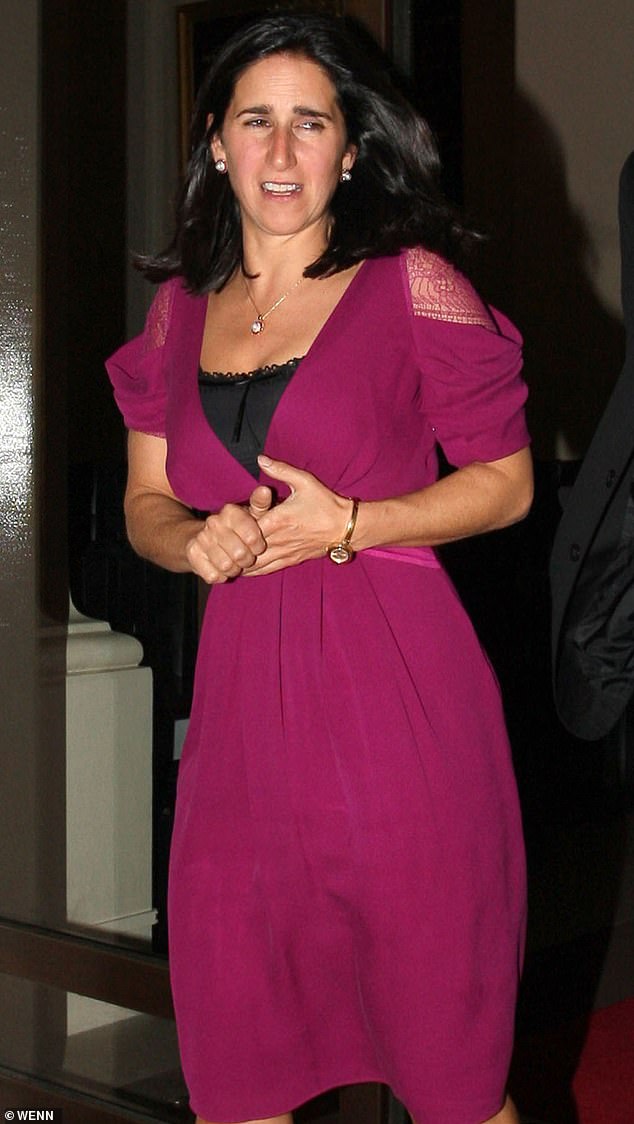 Eventually during Mr Johnson’s battle with Covid, Marina (above) was given the news. Some of her and Boris’s children, estranged from their father due to his treatment of their mother, went to the hospital

Destabilised by his divorce from Marina in May and the relentless fracturing of relations with the rest of the family, it was to 78-year-old Charlotte that he has turned for support. Only she was sincerely loyal. In solidarity, she had voted Leave.

To this day, Charlotte worries about the damaging effects on Boris of his parents’ marital discord witnessed as a child.

Meanwhile, many people have wondered whether the near- death Covid experience had drained him of his mojo – and with it his grip.

Some of the complaints levelled at him have proven to be unfounded, but the long-standing rebuke about his disorganisation and lack of attention to detail have come back to haunt him.

But Boris, with the chance to reshape Britain for the rest of the century, is too ambitious to forgo the opportunity to fulfil his dream and become a historic legend.

In the concluding page of his Churchill biography, he praised the wartime Prime Minister, writing: ‘He alone made the difference.’

Being remembered for making a difference is the dream of all politicians.

Extracts from Boris Johnson The Gambler, by Tom Bower, published by WH Allen, an imprint of Ebury Publishing, on Thursday.