Time's Up, an organisation formed last year to combat sexual harassment and assault in the workplace, is now coping with a crisis within its own ranks.

Chief executive officer Lisa Borders, who announced she was stepping down earlier this week, left the organisation because her son was accused of sexual misconduct, Time's Up disclosed on Thursday. 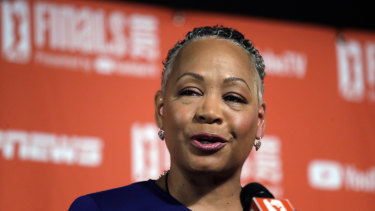 Lisa Borders resigned from Time’s Up after a sexual assault allegation was made against her son.Credit:AP

"Lisa Borders informed members of Time's Up leadership that sexual assault allegations had been made against her son in a private forum," the group said in an emailed statement. "Within 24 hours, Lisa made the decision to resign as president and CEO of Time's Up and we agreed that it was the right decision for all parties involved. All of our actions were fully guided by our support for survivors."

Time's Up issued the statement after the Los Angeles Times reported that Borders's son, Garry "Dijon" Bowden jnr, was accused of violating a woman during a "healing session."

A lawyer for Bowden said he gave the woman a healing massage that she had requested and showed the Times a text exchange in which the woman thanked him.

The lawyer said there was no inappropriate or nonconsensual touching.

When Borders announced her resignation earlier this week, she said it was to address "family concerns that require my singular focus".

The shake-up leaves Time's Up in need of a new leader. Borders, a former Coca-Cola executive and president of the Women's National Basketball Association, helped raise the profile of the group.

Time's Up said this week that chief operating officer Rebecca Goldman would be serving as interim CEO while it conducts an executive search.

"We remain committed to our mission to create, safe and dignified work for women of all kinds," the group said.

Time's Up, a Hollywood-led initiative, made a triumphant debut at the 2018 Golden Globes. Stars donned black in solidarity and Oprah Winfrey delivered an impassioned call for support.

In the year since, the group has notched a string of successes, big and small. But it has also faced scepticism about its mission and momentum.

The organisation's crown jewel — a legal-defence fund for lower-wage workers — now has nearly $US25 million in donations, up from $US13 million when the group was formed. Of that, $US6 million has gone toward 100 legal cases and investigations, with more than 800 lawyers signed on to assist, many working pro bono or at discounted rates.

Two talent agencies that answered the Time's Up challenge to reach gender parity in pay and leadership by 2020, ICM Partners and Creative Artists Agency, report that they are on track to make good on their pledge.

But the group's clout is also not yet clear. In January, Skydance Media hired as its animation chief, John Lasseter, who left his leadership posts at Pixar and Disney in 2018 after he was accused of unwanted touching. (He has apologised to anyone who felt his gestures "crossed the line.")

Skydance had consulted with Time's Up, but the group publicly slammed the hire; the organizations have differing accounts about whether Time's Up made its objections clear in advance. (Lasseter's hiring prompted Emma Thompson to exit a voice-over role in a forthcoming animated Skydance movie, a representative for the actress confirmed.) Several of Time's Up members said the episode was less about the limits of the group's power than about inertia in the industry.