London:  Three British cabinet ministers have publicly indicated they will back plans to delay Brexit if MPs vote down Prime Minister Theresa May's plan for a new deal with the European Union.

Business minister Greg Clark, work and pensions minister Amber Rudd, and justice minister David Gauke signalled in a newspaper column on Saturday that they will side with rebels and opposition parties next week to stop Britain leaving the European Union without a divorce deal on March 29 if necessary, adding their weight to calls for May to rule out a no-deal departure. 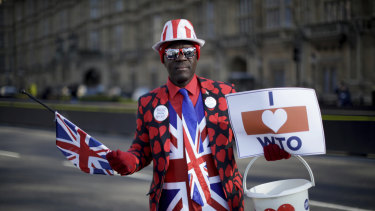 Leave the European Union supporter Joseph Afrane, aged 55 from London and originally from Ghana, poses for photographs outside the Houses of Parliament in London.Credit:AP

"Far from Brexit resulting in a newly independent United Kingdom stepping boldly into the wider world, crashing out on March 29 would see us poorer, less secure and potentially splitting up," they said, referring to the threat of a new bid for Scottish independence from the United Kingdom.

"Our economy will be damaged severely both in the short and the long term. Costs will increase, businesses that rely on just-in-time supply chains will be severely disrupted and investment will be discouraged," they wrote.

The ministers called on members of the European Research Group, formed by Conservative pro-Brexit MPs, to back the government's deal in parliament or risk seeing Brexit delayed.

But in a further sign of deep division over the issue, May's junior minister for Northern Ireland, John Penrose, wrote a column in the Sunday Telegraph saying removing the option of a no-deal departure on March 29 "could torpedo Brexit completely". Penrose said such a move could lead to further temporary extensions that "would become permanent."

Both May's Conservatives and the main opposition Labour Party are formally committed to delivering Brexit. Labour has recently appeared to soften its stance on a second referendum, although May has ruled such an option out.

MPs from both parties, however, are deeply split over how or even whether Britain will leave, and no majority has so far emerged in parliament for any comprehensive Brexit strategy.