Over a thousand Hong Kong school teachers braved thunderstorms on Saturday to start a weekend of anti-government demonstrations that some activists fear could see tougher police tactics on the city’s streets.

Following the escalation in violence during the past few days, the demonstrations this weekend will provide a litmus test as to whether the protest movement can retain the broad support that it has appeared to enjoy.

Demonstrators say they are fighting the erosion of the ‘one country, two systems’ arrangement that enshrined some autonomy for Hong Kong since China took it back from Britain in 1997. 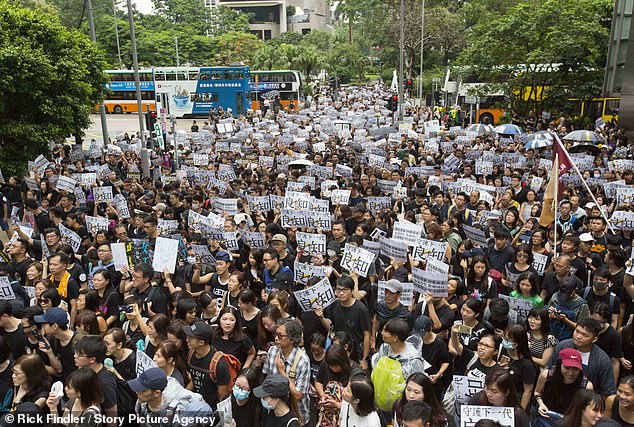 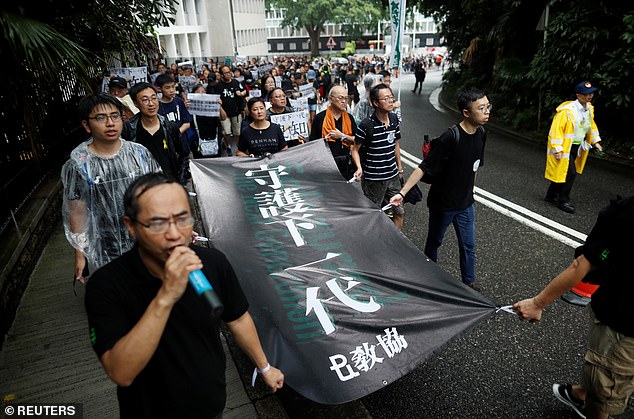 Demonstrators say they are fighting the erosion of the ‘one country, two systems’ arrangement

During the past week they have increasingly directed their frustrations toward police, who have responded with fiercer determination to clear them from the streets.

Yu, aged in her 40s and a music teacher at a local secondary school, said she was determined to show support for protesting students, even though she didn’t agree with all their actions.

‘I do appreciate their courage and caring about Hong Kong…they are definitely braver than our government,’ she said.

The teachers rally was approved by police and was peaceful. After gathering in the Central business district, they marched on the Government House residence of Hong Kong’s embattled leader Carrie Lam, chanting ‘Hong Kong police know the law, they break the law’.

Anti-government demonstrators were also expected to march through Kowloon districts popular with traders and tourists from mainland China.

The pro-democracy Civil Human Rights Front, which organised peaceful million-strong marches in June, has scheduled another protest for Sunday.

‘We all feel tensions are building and the level of stress is increasing,’ one front-line protester, Pun, 22, told Reuters during a sit-in at the international airport earlier in the week.

‘I know violence cannot fight violence but sometimes aggression is needed to attract the attention of the government and others,’ he said. ‘I have thrown rocks…I have also been hit by police with batons. We’re all slowly getting used to this.’

The Airport Authority obtained an interim court injunction on Wednesday to restrain people from ‘unlawfully and wilfully obstructing’ its operations.

The increasingly violent confrontations have plunged one of Asia’s financial capitals into its worst crisis for decades. 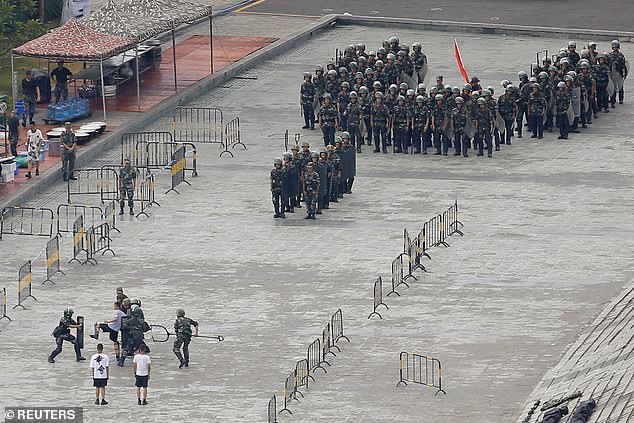 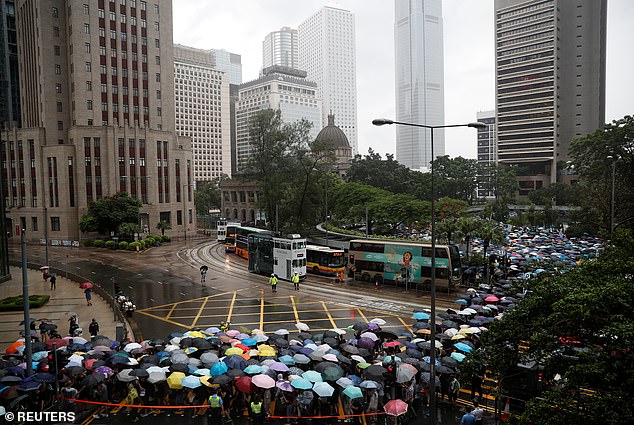 The unrest also presents one of the biggest challenges for Chinese President Xi Jinping since he came to power in 2012.

Western governments, including the United States, have stepped up calls for restraint following ugly and chaotic scenes at the airport.

The crisis is also resulting in corporate casualties, with the chief executive of Hong Kong carrier Cathay Pacific Airways quitting on Friday after China’s aviation regulator demanded it suspend staff involved in or supporting the protests.

Chinese officials have likened some actions by protesters to ‘terrorism’ and Chinese state media outlets have urged tougher response from Hong Kong police. 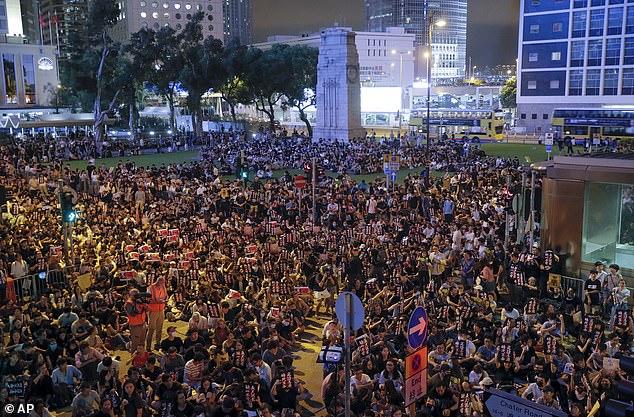 Clashes became noticeably fiercer during the past week. Protesters have used slingshots to fire marbles at police, shone lasers at them and at times thrown bricks and firebombs.

Police stations have been surrounded and attacked 76 times during the crisis, police said.

Having fired tear gas to disperse protesters in the streets, and at one point in a subway station, police are warning that they could get tougher.

Police have so far refrained from deploying armoured cars which could smash through barricades. Nor have they used water cannon – two were purchased in 2014 – or unleashed the force’s dog squad on protesters.

‘We have in place a more flexible strategy,’ one police officer said. ‘We are in a far better position to have a more efficient and rapid response.’

China’s People’s Armed Police units have staged extensive drills across the border in Shenzhen in recent days, but Hong Kong police say they have the operational depth and strength to handle local tensions.

As protesters have employed a flash-mob strategy, withdrawing when police advance, only to re-appear elsewhere, police have also begun using undercover officers, disguised as protesters, to gather intelligence and make arrests.

Police have made some 750 arrests since the unrest began in June, and have charged some protesters with rioting which can attract a 10-year jail term as punishment.

In some cases, the arrests have been accompanied by extensive property searches and seizure of phones and computers, police sources say.

‘They are doing these hit and run lately,’ one senior police officer told media earlier this week. ‘Arrests should be a natural consequence. If we can arrest more and more because they are undertaking illegal acts, so be it.’

Police in Melbourne issued a warning on Saturday after small scuffles erupted between supporters and opponents of the Hong Kong protest movement during a rally attended by several hundred people from the city’s Chinese community on Friday evening.

‘We respect the right of the community to express their views peacefully and lawfully but will not tolerate those who break the law or engage in antisocial or violent behavior,’ Victoria police spokeswoman said in an e-mailed statement. 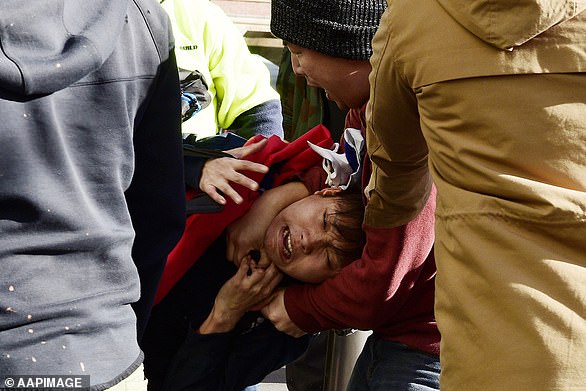 The police said that they interviewed two men in relation to ‘unlawful assault’ and released them pending summons, after pushing and shoving took place at the rally organised in support of the Hong Kong protesters. Australian media reported the rally attracted 600 people at its peak.

No injuries were reported.

On Saturday, more than 100 people gathered in downtown Melbourne for another rally in support of protesters in Hong Kong. The Guardian reported that a handful of people began shouting at the group but police escorted them from the rally. 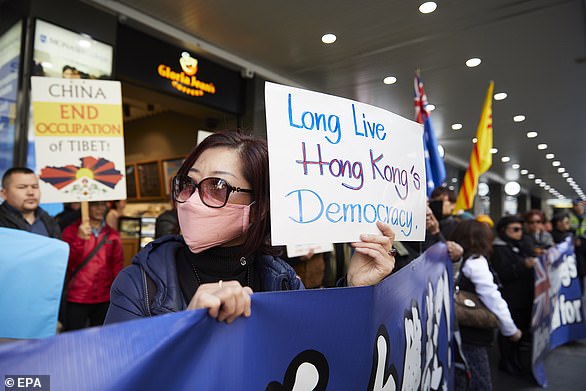 Chinese now account for nearly 10 percent of the overseas-born population in Australia, according to government statistics.

China sends the most international students to Australia, accounting for 29 percent of the 622,000 total enrolled in May, according to data from the Department of Education.