THOUSANDS of people have marched in Berlin today to protest coronavirus restrictions – despite a surge in cases in Germany.

Protesters flooded the streets of the capital this afternoon in defiance of measures imposed to curb the spread of the virus, claiming their personal freedoms had been violated and the "end of the pandemic" had arrived. 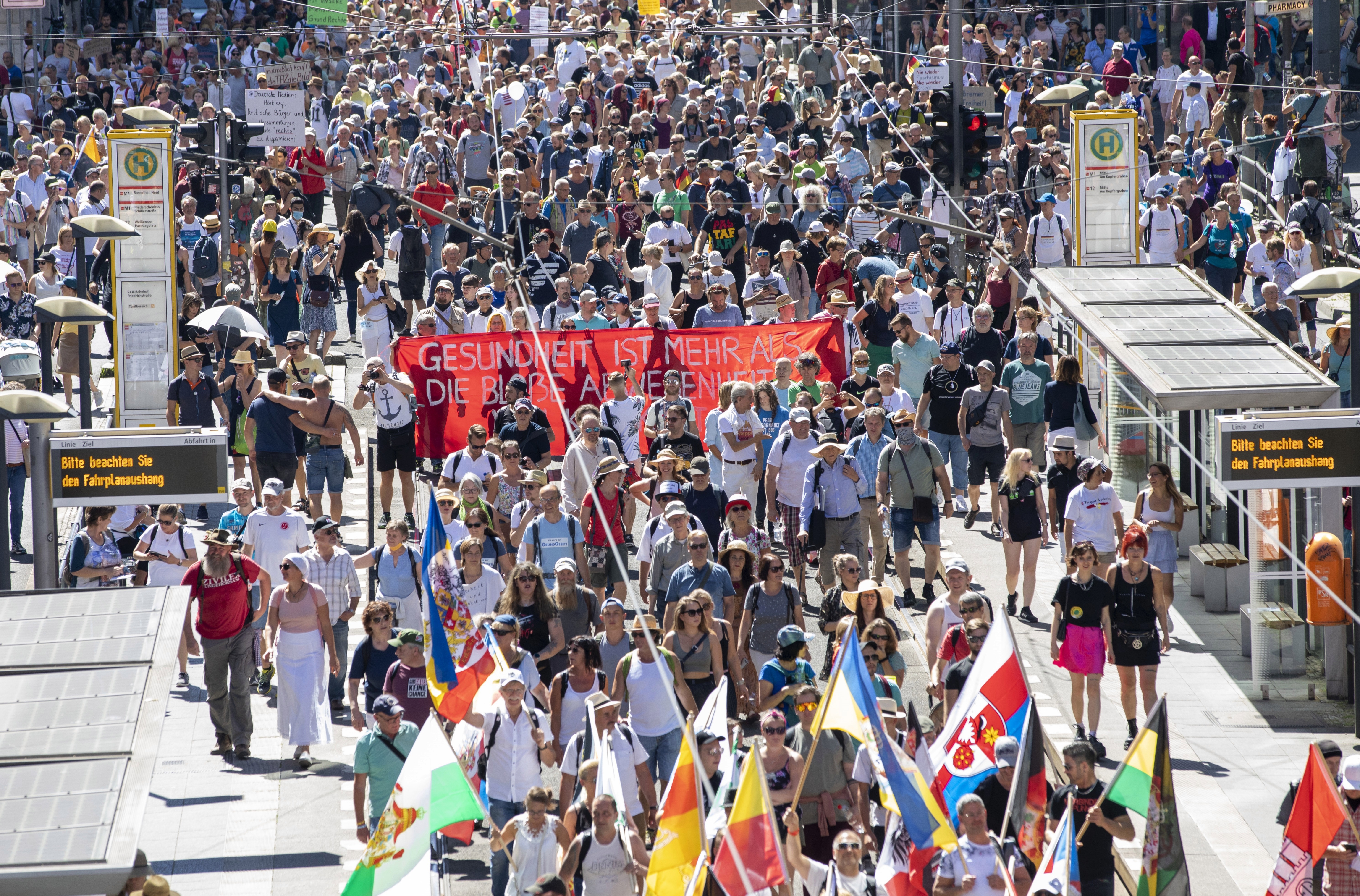 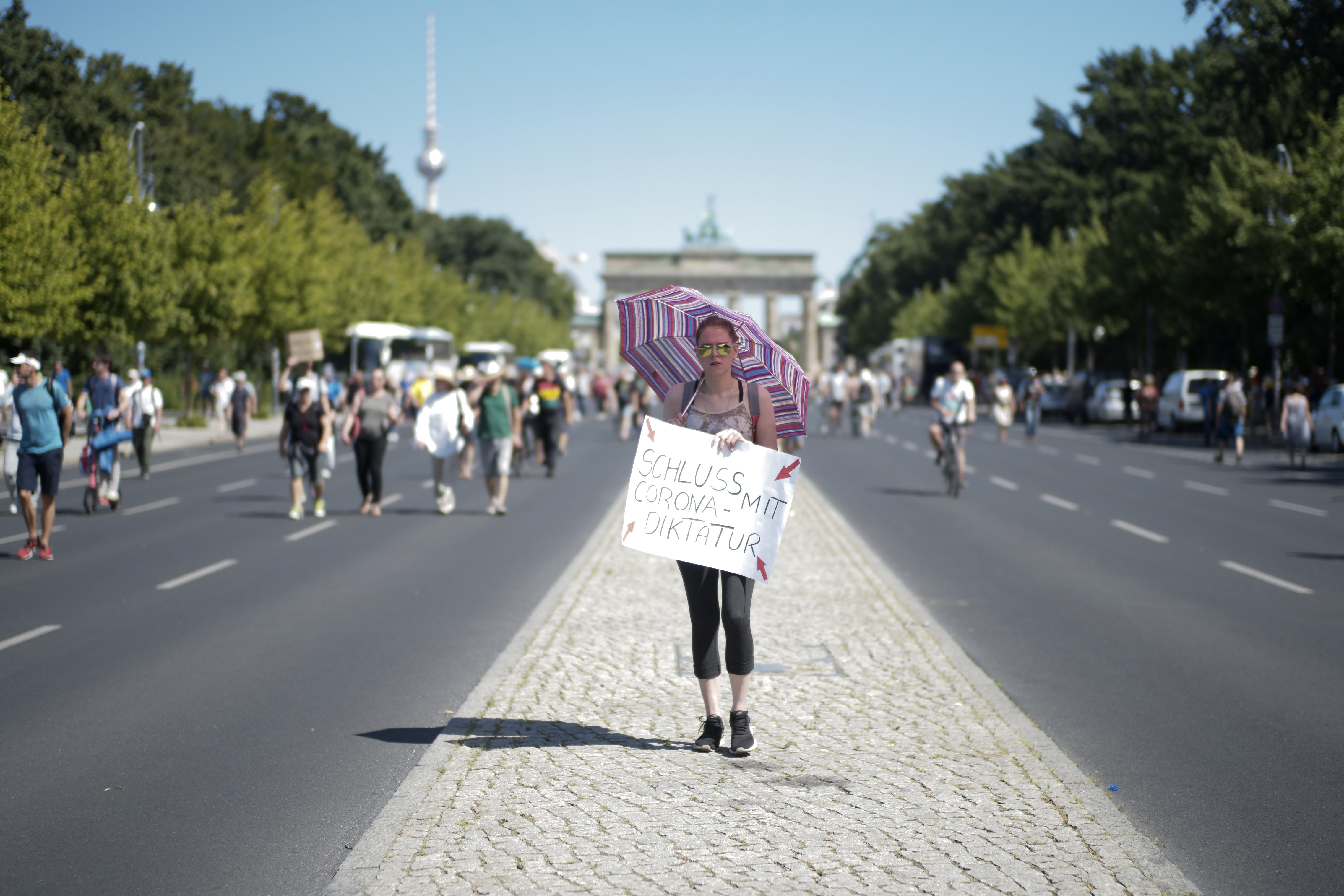 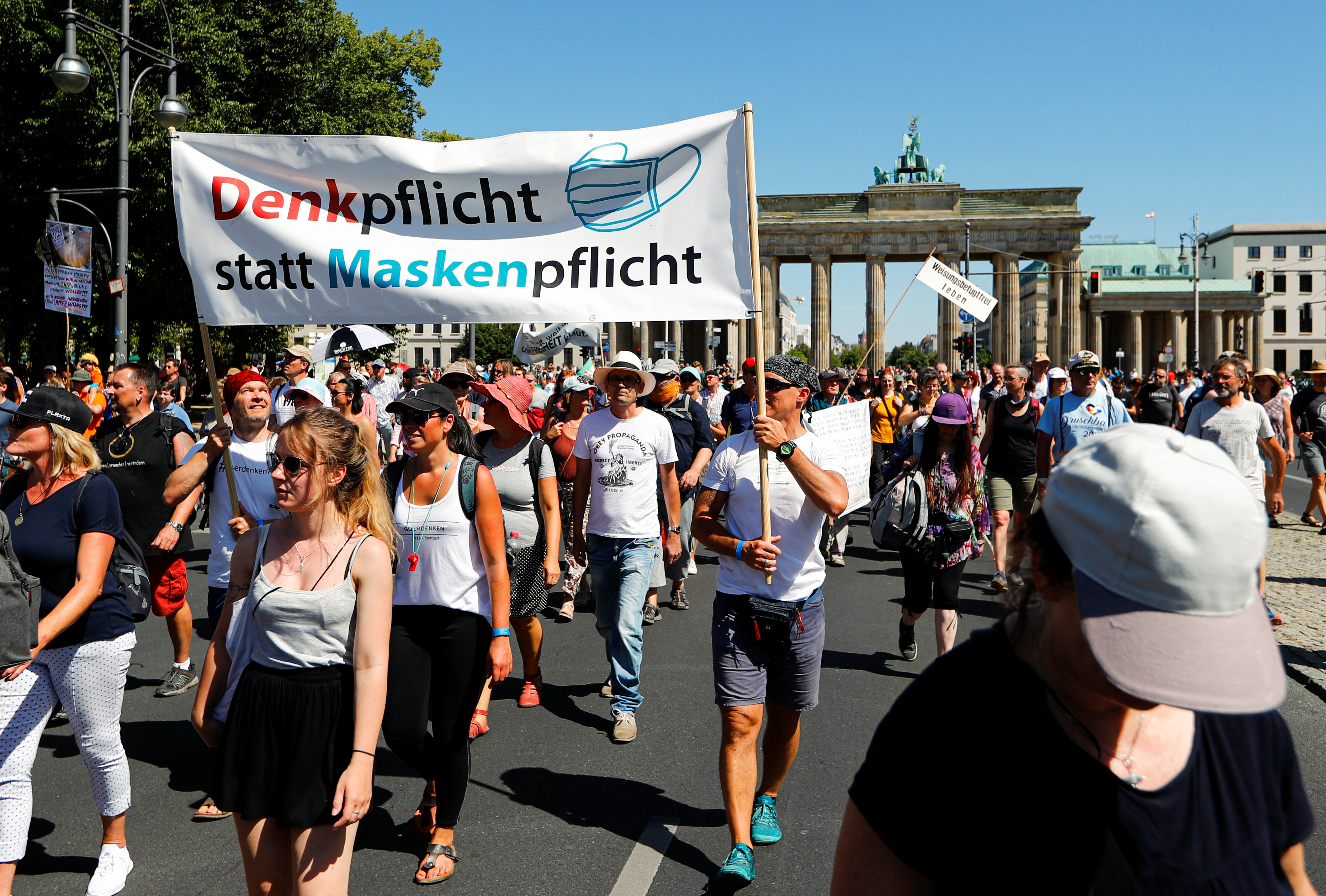 A huge crowd, most of whom were not wearing masks, marched from the Brandenburg Gate in central Berlin through a wide boulevard heading towards the Tiergarten.

Demonstrators labelled the protests: "The end of the pandemic: freedom day".

The loose gathering, estimated by police to be around 15,000, drew an assorted crowd of libertarians, coronavirus-sceptics and conspiracy theorists.

There was also a small far-right presence, with some protesters pictured carrying Germany's imperial flag.

'WE ARE FREE PEOPLE'

Footage of the event shows protesters singing "We are free people!" to the tune of Queen’s "We Will Rock You".

Other protesters were snapped carrying placards which read: "We are making a noise because you are stealing our freedom!" and "Do think! Don’t wear a mask!"

One demonstrator told Reuters: “Our demand is to return to democracy.

"The mask that enslaves us must go.”

The protests follow a rallying cry from entrepreneur and politician Michael Ballweg, who has previously organised demonstrations in the city of Stuttgart – where he is running to become mayor. 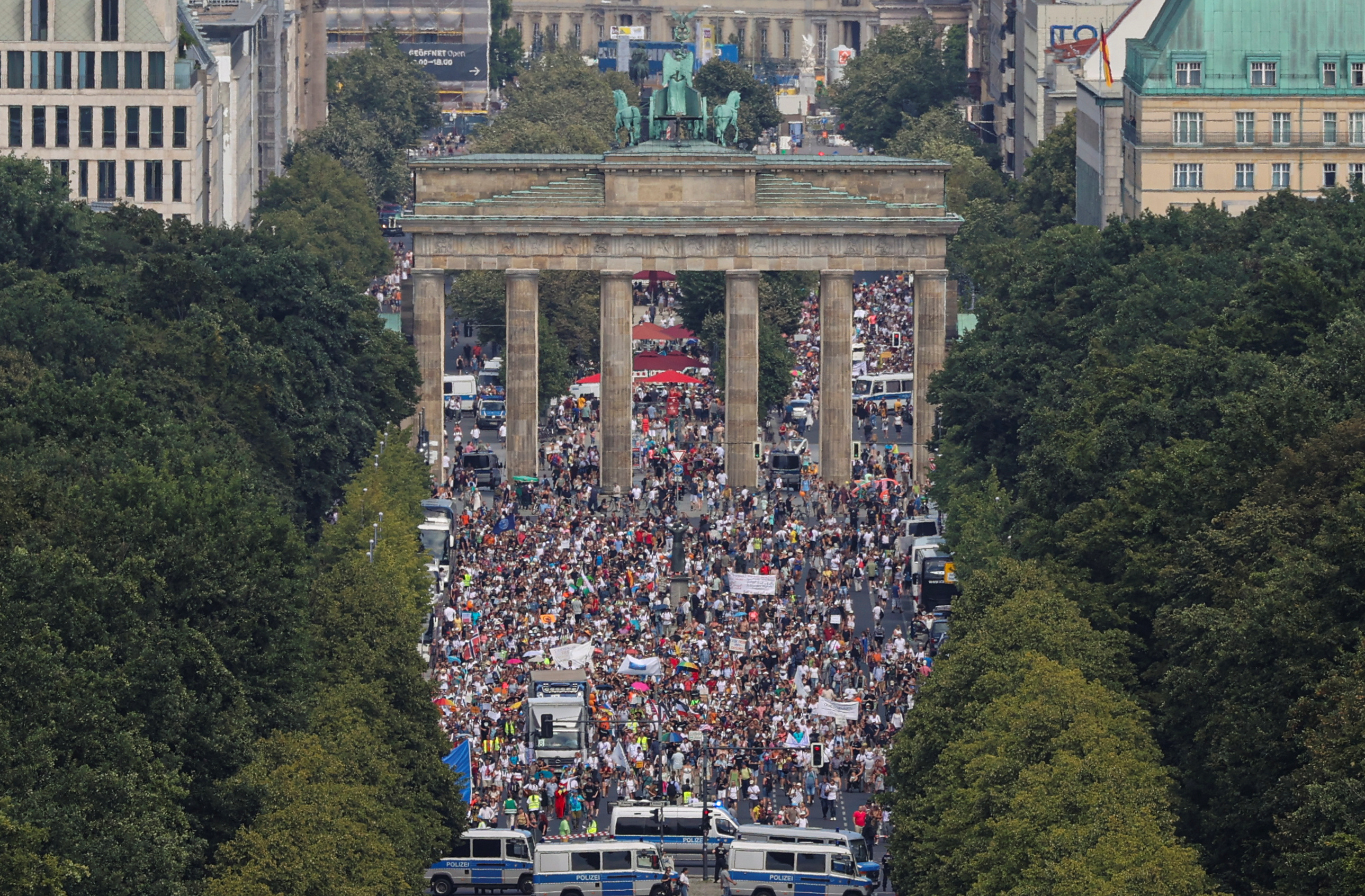 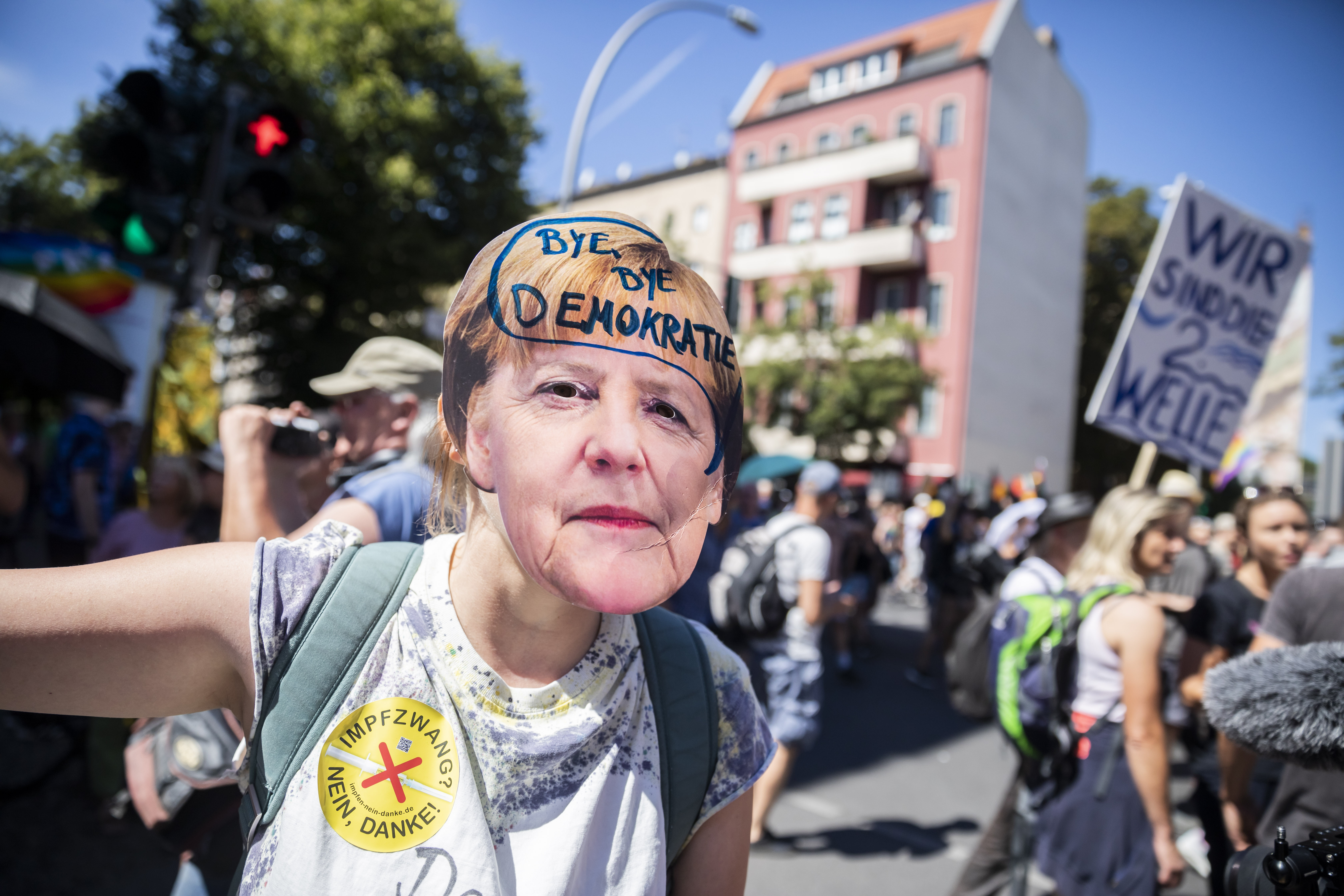 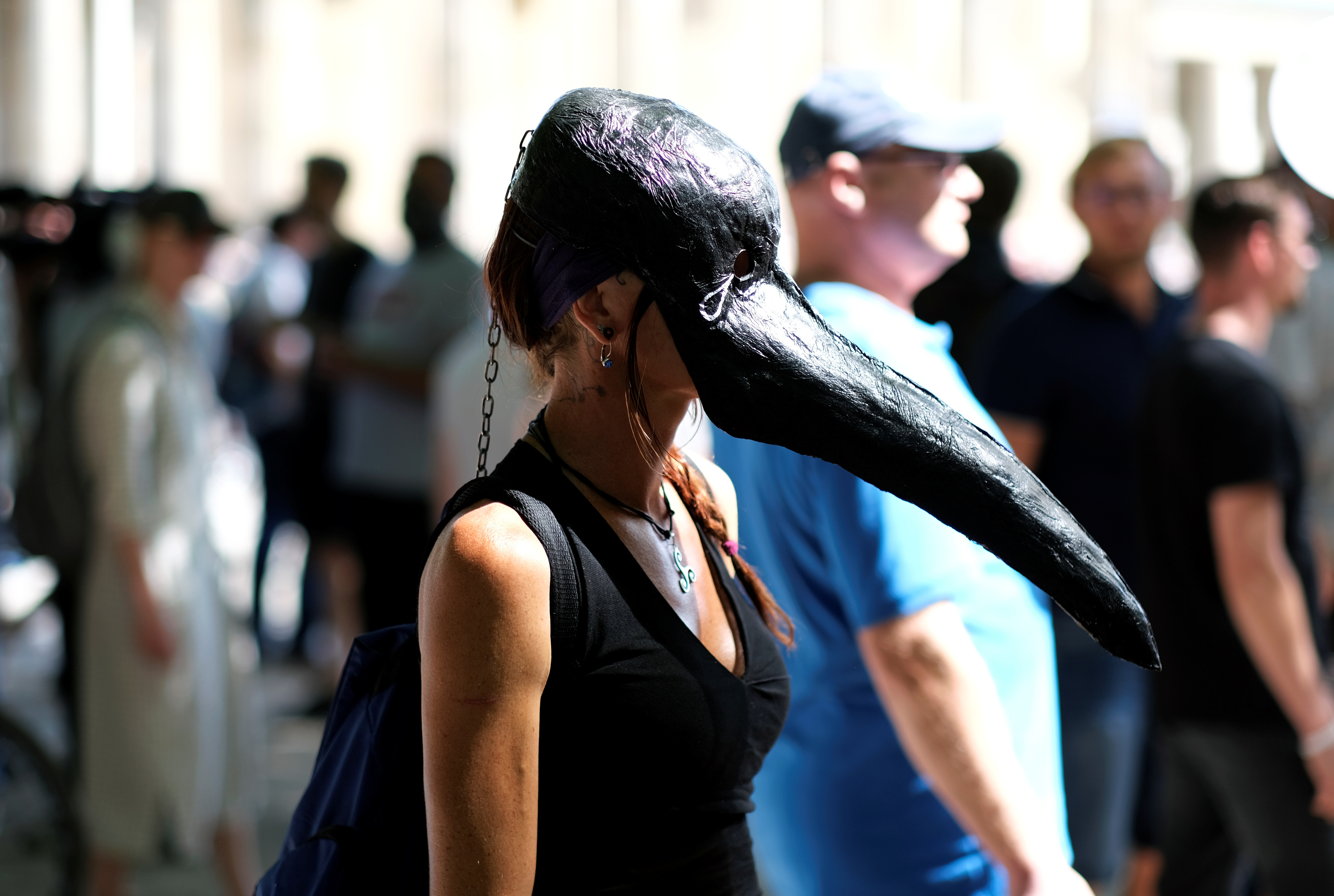 It comes amidst a concerning spike in infections in Germany – which was widely praised for its initial handling of the pandemic.

The country has seen a lower death toll many of its European neighbours after imposing a mass testing and contact tracing programme at an early stage of the outbreak.

It allowed Chancellor Angela Merkel to begin the easing of lockdown restrictions in late-April, though large outbreaks have been recorded at meat processing factories and tower blocks.

Countries across Europe are seeing similar clusters of infection form in specific areas – prompting fears of a second wave across the continent.

Spain's seven-day average has surged to 2,181 cases per day, up from 1,615 last week and forcing the UK to impose a quarantine for arrivals from the country.

The seven-day average in France also stands at 1,025, though health minister Oliver Veran has insisted the country is not experiencing a second wave of the virus.

So far, Germany has recorded 200,000 infections and nearly 1,000 deaths, though there are fears that infection rates are creeping up in many regions of the country.

Just yesterday, the country's national disease control center registered 955 new infections – which is high by the country's recent standards and brings the crucial R rate to above 1.

Lothar Wieler, the head of the Robert Koch Institute which oversees the management of the pandemic, said last week that the rise in the cases was a source of "great concern" for health authorities.

The Bundestag has introduced new measures in order to deal with the spike in cases, including free testing at airports and wearing a face covering inside shops.

Politicians took to Twitter to the slam the protesters who were brazenly flouting social distancing rules.

“Thousands of #covidiots are celebrating themselves in Berlin as ‘the second wave,’ without distancing, without masks," tweeted Saskia Esken, a co-leader of the Social Democrats, the junior party in Germany's governing coalition.

“They are not just endangering our health, they are endangering our success against the pandemic and for the revival of the economy, education and society. Irresponsible!" 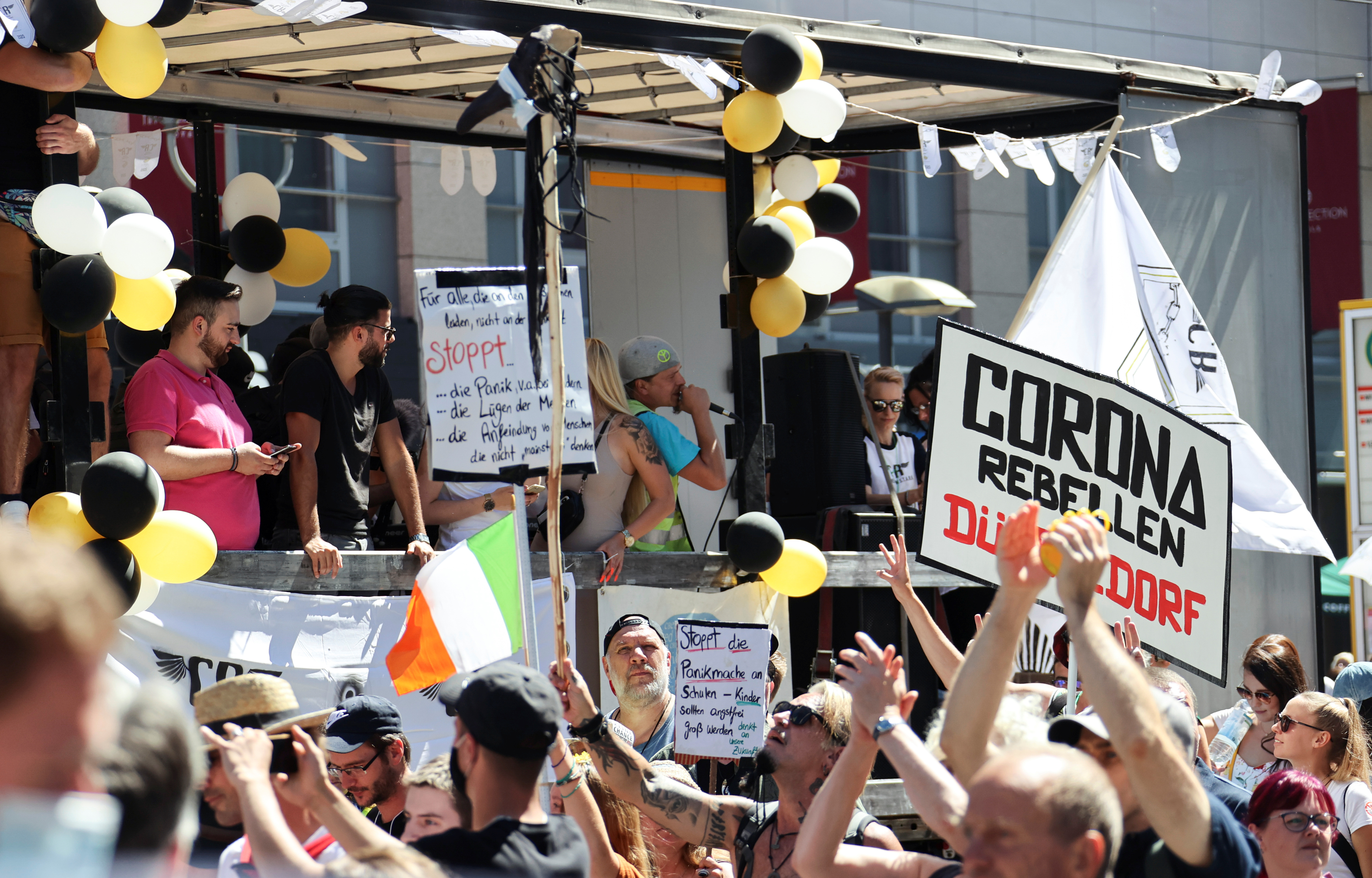 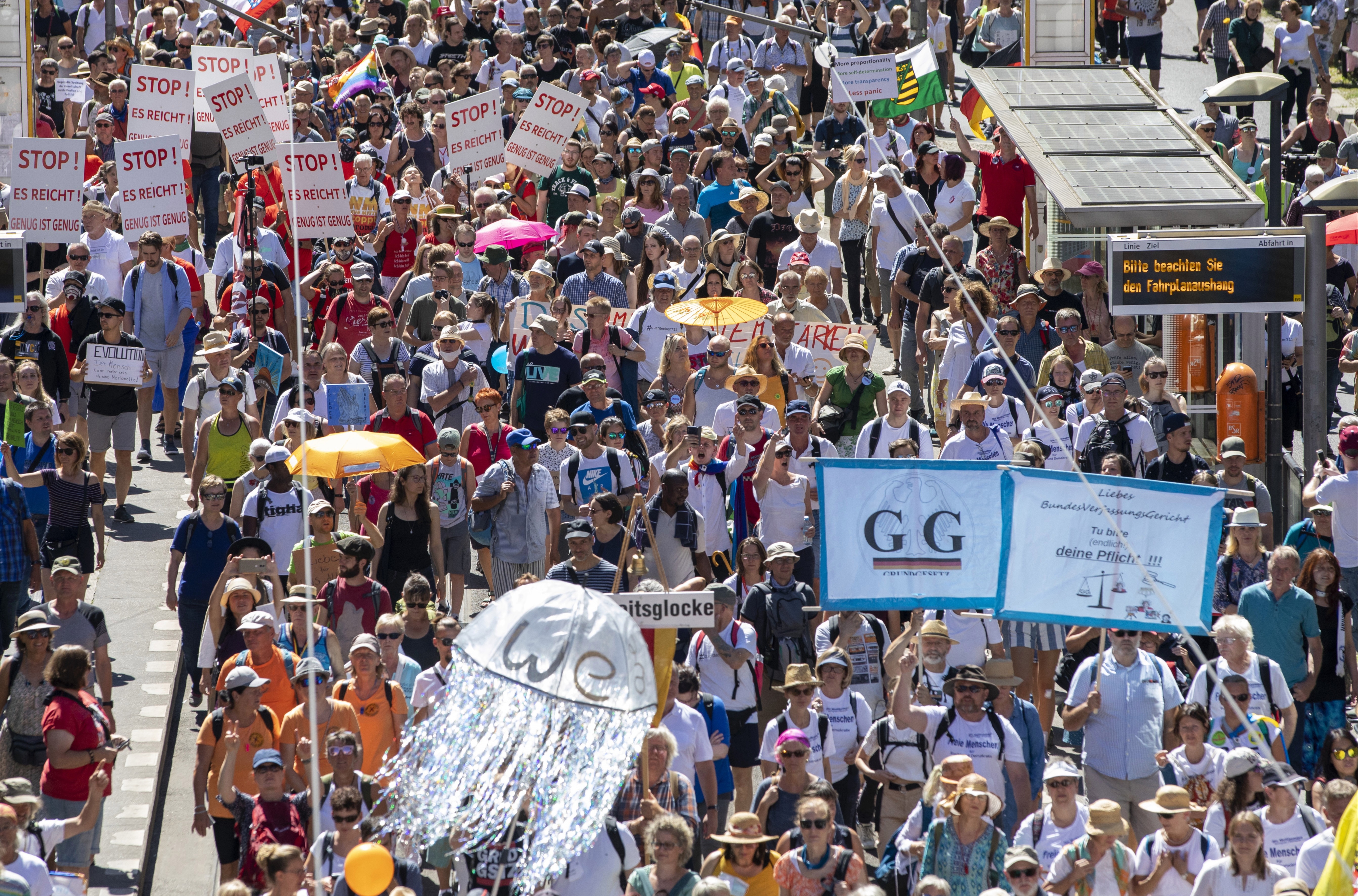 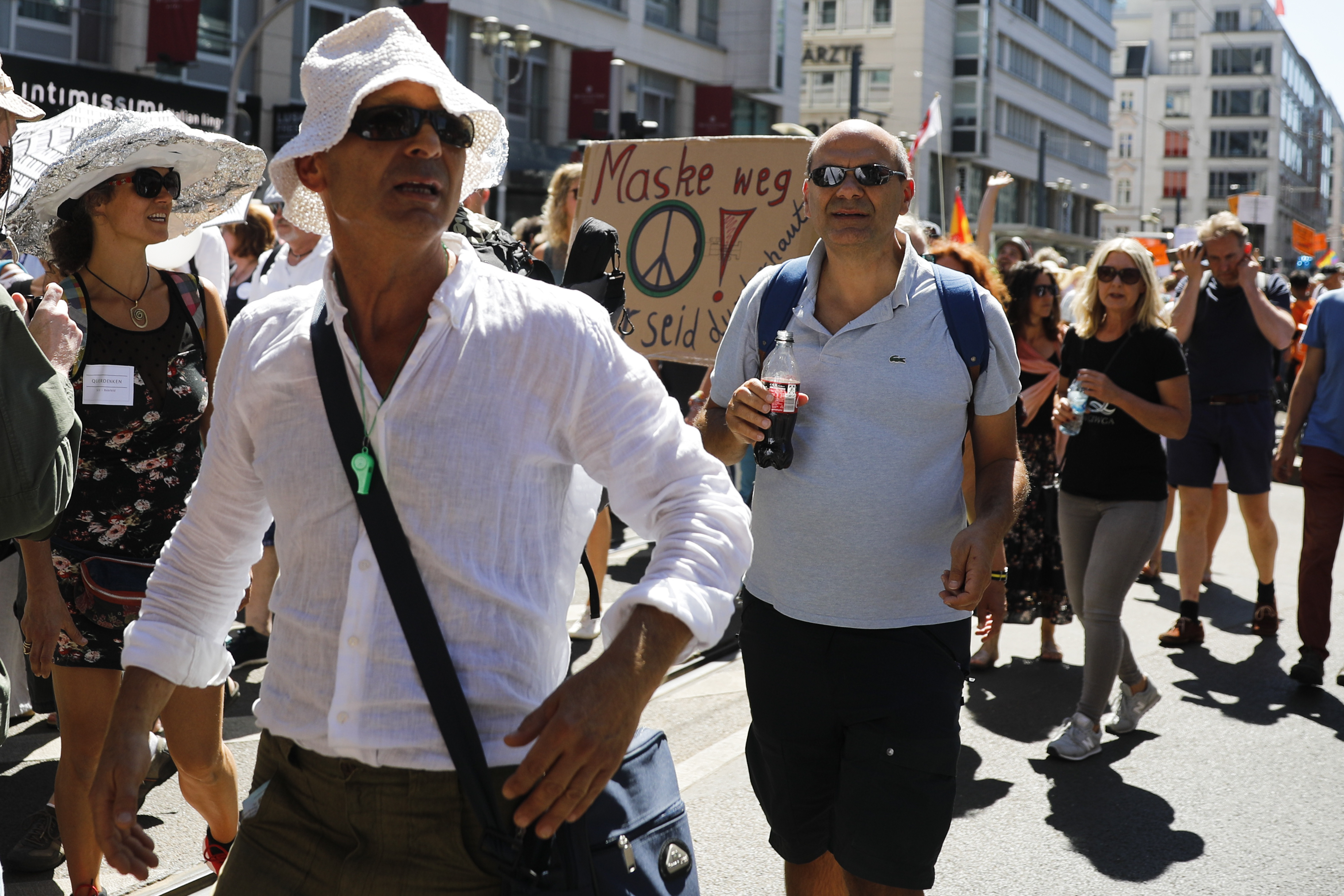 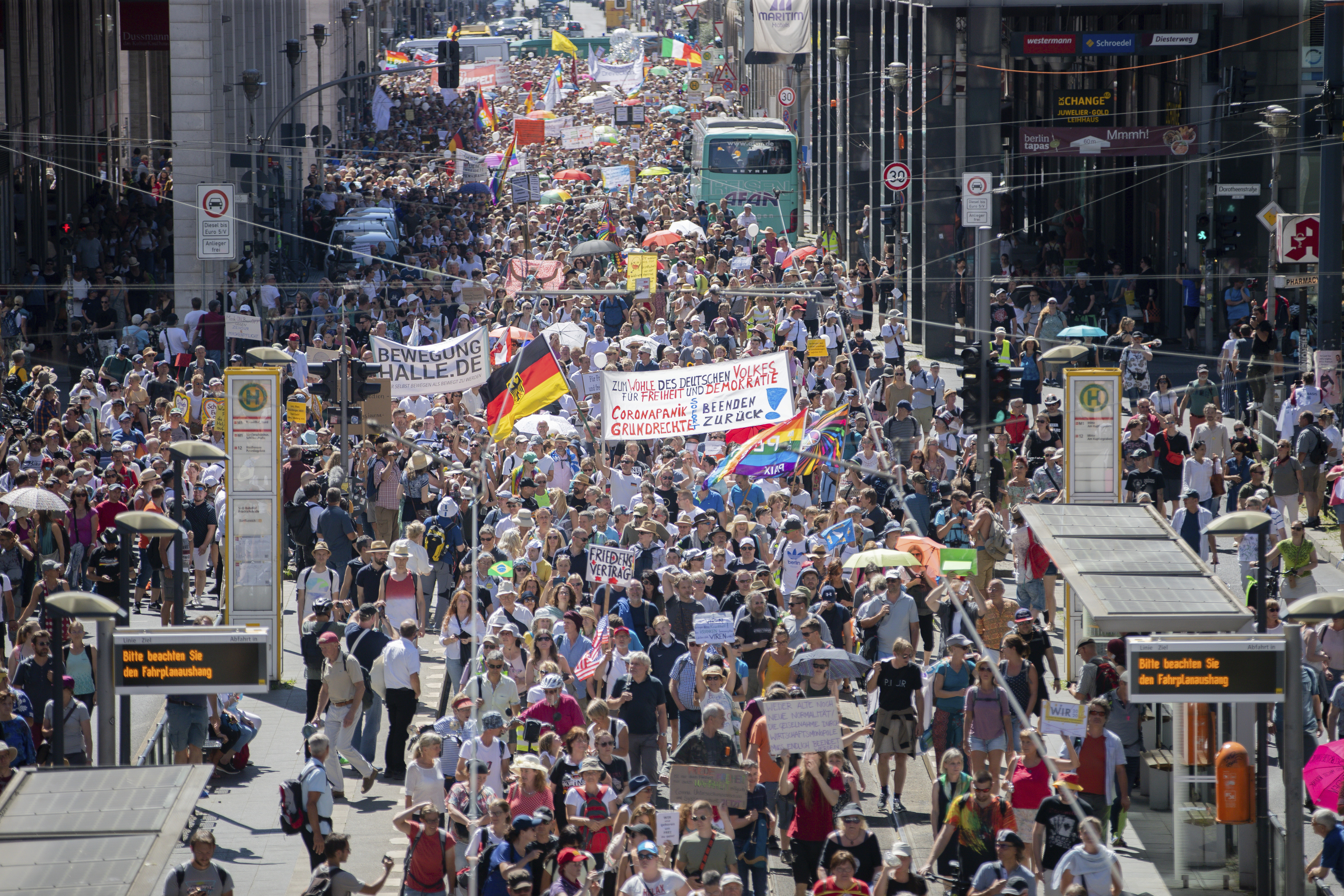