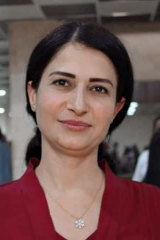 Kurdish politician Hevrin Khalaf, secretary general of the Future Party, was killed in a brutal manner.Credit:Twitter

Duhok: Six days after Donald Trump announced his troops were abandoning the "endless war" in Syria, a Kurdish woman called Hevrin Khalaf was driving along the country's M4 highway when her armoured vehicle was forced off the road by heavy machine gun fire and she and her driver were pulled out.

Her autopsy report – translated roughly into English – shows what happened next.

"The woman was beaten with a solid body [object] on the head … and on the bottom of the left leg, which led to the fractures of the two bones of the leg, and also beating by sharp objects on the posterior face of the legs, and dragged from her hair causing the hair to take off … with the skin from the back of the head.

The cause of death was "severe cerebral haemorrhage following gunshot wounds to the head", according to Dr Tayceer al-Makdesi.

Khalaf was not a combatant. She was a Kurdish politician, the head of the Future Party, and a women's rights activist. She once suggested that every internally displaced family be given a small tree to plant in front of their tent at the camp so that, "after they have left … it will be a beautiful green memory in a land that has grieved them and made them homeless".

The group being blamed for her killing is called Ahrar al-Sharqiya. It's a Sunni-Islam extremist organisation, one of dozens of armed groups that sprang out of the chaos of Syria's civil war. It is now doing the work of Turkey. 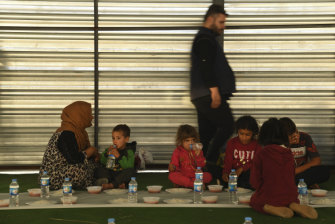 A Syrian family share a meal at the Bardarash Refugee Camp in Iraqi Kurdistan. Credit:Kate Geraghty

"Oh, pigs, we are coming," says one fighter on top of an armoured vehicle, before he uses another slogan: "baqiya" (enduring), which was an Islamic State catch-word.

Also among the militants fighting for Turkey are the infamous Jaish al-Islam (the army of Islam) and the Sultan Murad Brigade, named after an Ottoman emperor.

Turkey's operation "Peace Spring" is driven by these groups. 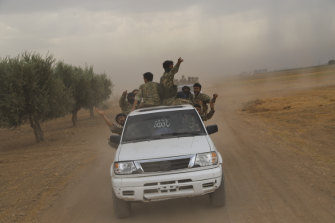 A convoy of Turkish-backed Free Syrian Army troops prepare to cross into Turkey.Credit:AP

President Recep Tayyip Erdogan's ambitions for land in northern Syria – a 30 kilometre strip of the country at the border supposed to act as a buffer against what they believe are Kurdish terrorists – are being enacted by what the Kurds claim are almost 30 different militias claiming the mantle of the "Syrian National Army".

Their fighters are paid and supported by Turkey but have been accused of multiple war crimes – murders, executions, kidnappings – where they have previously held sway in the regions of Afrin and Ghouta.

Stung by the poor press that these exploits attract, a chat group on the encrypted app Telegram recently asked Turkish-backed factions "not to publish any video filmed during the battles because it distorts our reputation".