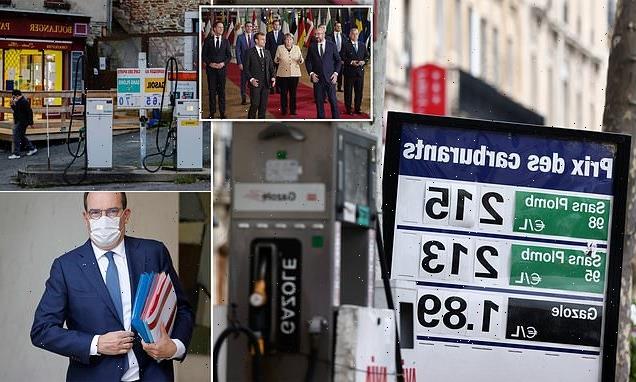 Millions of lower and medium-income motorists will be given 100 euros (£84) in financial assistance in France to help them cope with rising fuel prices.

French Prime Minister Jean Castex has announced the move on TF1 television, saying that it was ‘an exceptional response to an exceptional situation’.

The assistance will start being given in December. 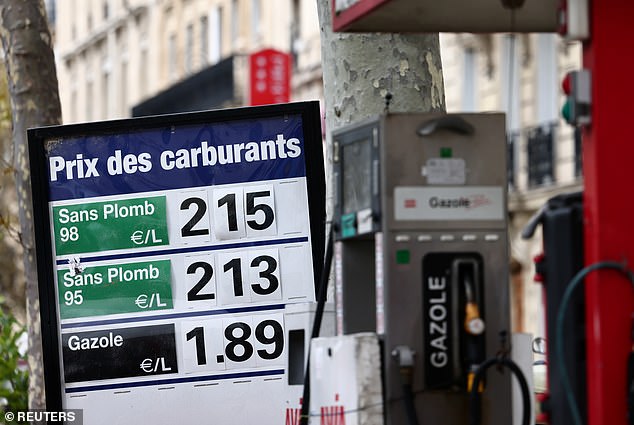 French Prime Minister Jean Castex has announced that millions of lower and medium-income motorists will be given 100 euros (£84) in financial assistance to help them cope with rising fuel prices. Pictured: Fuel price signs are seen at a petrol station in Paris, October 18, 2021

The measure comes amid growing public discontent over a global energy crunch, coming just as many households are struggling to recover from the pandemic economic crisis.

Mr Castex, who had previously announced the government’s decision to freeze natural gas prices, said that measure would last until the end of next year.

The issue is especially sensitive after the anti-government ‘yellow vest’ movement which started in 2018 against a hike in fuel taxes — and was named after the fluorescent jackets French motorists are required to have in their cars.

It quickly turned into a general protest against economic injustice, leading to weekly, sometimes violent demonstrations.

The government’s move also comes ahead of France’s presidential election scheduled in April, where President Emmanuel Macron is expected to run for re-election.

The hard-right political talk-show star Eric Zemmour was forecast to reach the second round of the French presidential election in a new poll published on Friday, although President Emmanuel Macron was still forecast to win the first round.

Meanwhile, European Union leaders struggled to find a common ground during a long debate on Thursday on how to ease the pain of soaring energy bills. 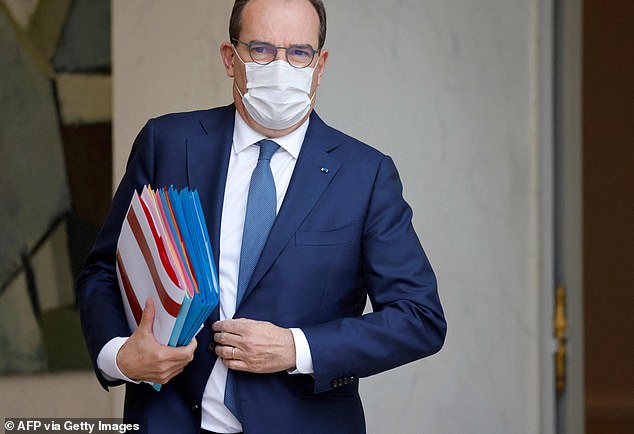 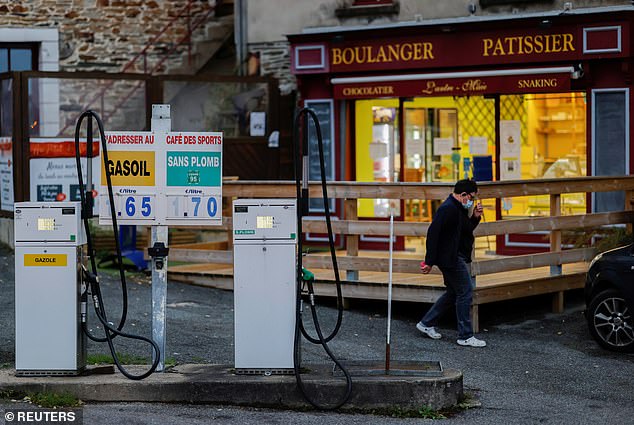 A woman walks near fuel pumps at a petrol station in the village of Langon near Rennes, France, October 21, 2021

The hours-long energy discussion at the EU leaders’ summit came amid spiraling prices that are pummeling households and businesses still reeling from the impact of the COVID-19 pandemic.

In need of immediate solutions, leaders are also seeking to safeguard energy supplies to the 27-nation bloc by speeding up the transition away from polluting fossil fuels to sustainable alternatives.

To help consumers and companies this winter, leaders agreed that tax cuts, state aid and other measures like bill payment deferrals proposed by the European Commission would be useful on both the short and longer terms.

In their conclusions, they asked the EU’s executive arm to look into the gas and electricity markets, as well as the bloc’s emissions trading program, under which companies pay for carbon dioxide they emit.

The aim is to check whether manipulation of the market could have influenced the carbon price increase.

But there was no mention of setting up a joint procurement program for gas reserves, an idea recently proposed by Spain. 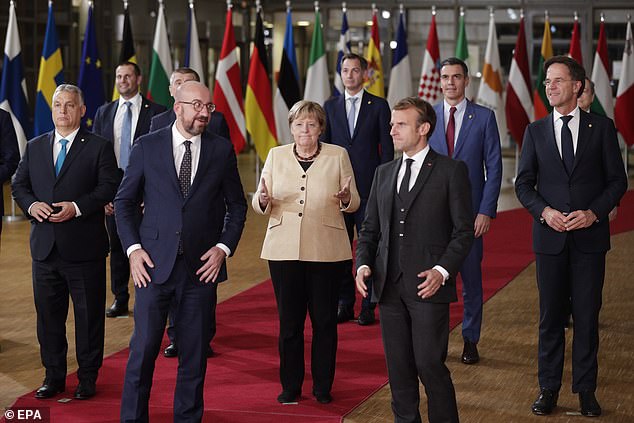 The talks came just 10 days ahead of the opening of a U.N. climate summit that is widely seen as the last chance to limit global warming to 1.5 degrees Celsius above pre-industrial levels.

European Commission President Ursula von der Leyen said the EU’s executive and its member states already are working to ease the burden of soaring energy bills on households and businesses.

She said leaders also will have to look at the way energy markets function but stressed that ‘in the mid and long term, it is very clear that the strategy has to be to invest massively in clean and renewable energy’ produced in Europe.

The debate on spiraling energy prices also took place against a backdrop of frosty relations with Russia, a key supplier of gas to Europe.

Von der Leyen said Wednesday that with the bloc importing 90% of its gas – much of it from strategic rival Russia – ‘this makes us vulnerable.’ Gas makes up one quarter of all European energy consumption. 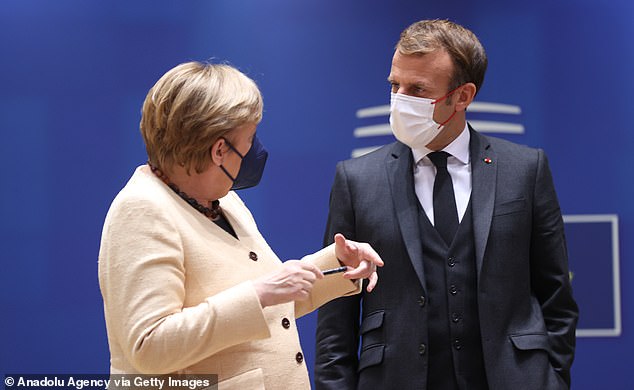 Von der Leyen has said that while Norway had raised its gas exports to the bloc to meet increased demand, Russia’s Gazprom had not gone beyond honoring its long-term contracts with the EU.

Gas prices have soared this year to 95 euros from about 19 euros per megawatt hour, affecting everything from household heating bills to farmers and food producers. The EU’s executive commission says that lower-income households are hardest hit because they spend a higher proportion of their income on energy.

Many countries have already offered energy tax cuts to ease the pain.

While all leaders want to minimize the impact of soaring energy prices on their populations, they differ on how to do it.

Entering Thursday’s summit, German Chancellor Angela Merkel said that the issue of soaring energy prices should be differentiated from the long-term fight against climate change.

‘I think that we should react calmly; we in Germany will do so in any case,’ she said. 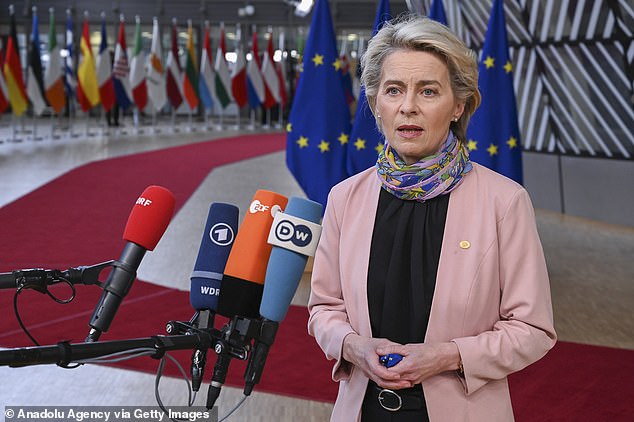 President of the European Commission Ursula von der Leyen speaks to press members as she arrives for the first day of EU Leaders’ Summit in Brussels, Belgium on October 21, 2021

Belgian Prime Minister Alexander De Croo said his country is among those that are helping households and businesses foot rising power bills. But he added that long-term solutions must also be found.

‘And in the long term, there is only one solution – invest more in renewable energy so we are less vulnerable to price fluctuations for fossil fuels,’ he said.

Hungarian Prime Minister Viktor Orban has blamed the hike specifically on the Commission’s Green Deal plans that includes cutting greenhouse gas emissions by 55% by 2030 and making the bloc carbon neutral by 2050.

The current crisis has reignited a debate on whether the EU should promote nuclear power projects as a way of becoming more energy independent. That could be done by making them eligible for billions of euros as part of the European Green Deal and coronavirus recovery fund.

Two years ago, leaders agreed that nuclear energy could be part of the EU’s efforts to become carbon-neutral. However, they have yet to decide whether nuclear projects can be included in the so-called taxonomy, a classification system attempting to define what activities can qualify for sustainable investment.

France recently asked for the inclusion of nuclear power in the taxonomy framework by the end of the year, leading the charge with nine other EU countries – Bulgaria, Croatia, Czech Republic, Finland, Hungary, Poland, Romania, Slovakia and Slovenia.

Energy ministers from the bloc will meet as early as next week to continue the talks, with leaders set to reassess the situation at their next summit in December.