‘Of this I am absolutely sure… You, the public, have had enough’: Mrs May’s Brexit address to the nation in full

Prime Minister Theresa May addressed the nation from Downing Street on Wednesday night, to update Britain on her Brexit plans. She confirmed the UK would not leave the EU on March 29 and said she had asked Brussels for a three-month extension to Brexit. Here is what she said in full:

‘Nearly three years have passed since the public voted to leave the European Union.

‘It was the biggest democratic exercise in our country’s history.

‘I came to office on a promise to deliver on that verdict.

‘In March 2017 I triggered the Article 50 process for the UK to exit the EU and Parliament supported it overwhelmingly. 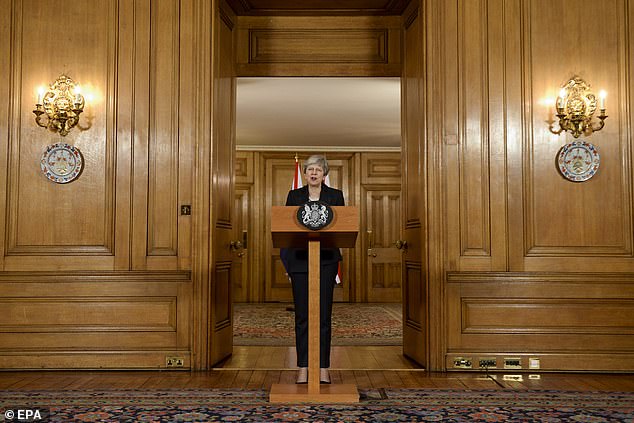 ‘This delay is a matter of great personal regret for me,’ Mrs May told Britain from Downing St

‘Two years on, MPs have been unable to agree on a way to implement the UK’s withdrawal.

‘As a result, we will now not leave on time with a deal on the 29th of March.

‘This delay is a matter of great personal regret for me.

‘And of this I am absolutely sure: You, the public, have had enough.

‘You’re tired of the infighting, you’re tired of the political games and the arcane procedural rows, tired of MPs talking about nothing else but Brexit when you have real concerns about our children’s schools, our National Health Service, knife crime.

‘You want this stage of the Brexit process to be over and done with. I agree. I am on your side.

‘It is now time for MPs to decide.

‘So, today, I have written to Donald Tusk the President of the European Council to request a short extension of Article 50 up to the 30th of June to give MPs the time to make a final choice. 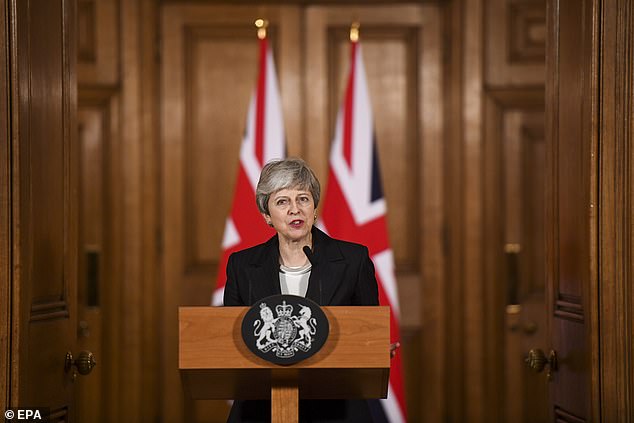 ‘But I am not prepared to delay Brexit any further than the 30th of June,’ Mrs May told viewers

‘Do they want to leave the EU with a deal which delivers on the result of the referendum, that takes control of our money borders and laws while protecting jobs and our national security?

‘Do they want to leave without a deal, or do they not want to leave at all causing potentially irreparable damage to public trust not just in this generation of politicians but to our entire democratic process?

‘It is high time we made a decision.

‘So far, Parliament has done everything possible to avoid making a choice.

‘Motion after motion and amendment after amendment has been tabled without Parliament ever deciding what it wants.

‘All MPs have been willing to say is what they do not want.

‘I passionately hope MPs will find a way to back the deal I’ve negotiated with the EU, a deal that delivers on the result of the referendum and is the very best deal negotiable.

‘And I will continue to work night and day to secure the support of my colleagues, the DUP and others for this deal.

‘But I am not prepared to delay Brexit any further than the 30th of June. 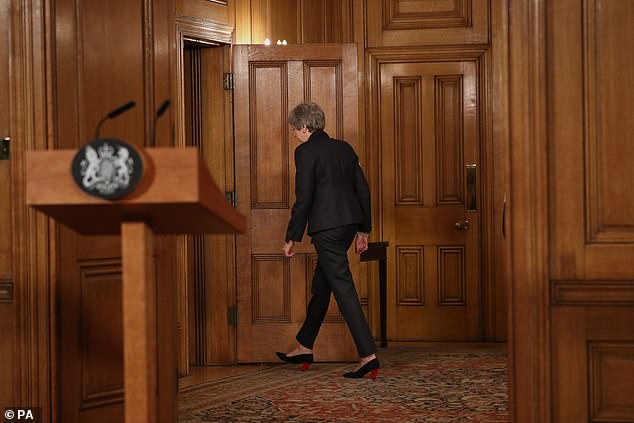 We’re off… on June 30th at the latest, as long as Brussels agrees, Mrs May said in her address

‘Some argue that I’m making the wrong choice and I should ask for a longer extension to the end of the year or beyond to give more time for politicians to argue over the way forward.

‘That would mean asking you to vote in European elections nearly three years after our country decided to leave.

‘What kind of message would that send? And just how bitter and divisive would that election campaign be at a time when the country desperately needs bringing back together.

‘Some have suggested holding a second referendum.

‘I don’t believe that’s what you want and it is not what I want.

‘We asked you the question already and you’ve given us your answer.

‘Now you want us to get on with it.

‘And that is what I am determined to do.’