Brussels: Prime Minister Theresa May of Britain headed home flustered and empty-handed on Friday after a blunt exchange at a European Union summit, where May's entreaties for help to amend a withdrawal deal that would satisfy her Parliament were rejected. 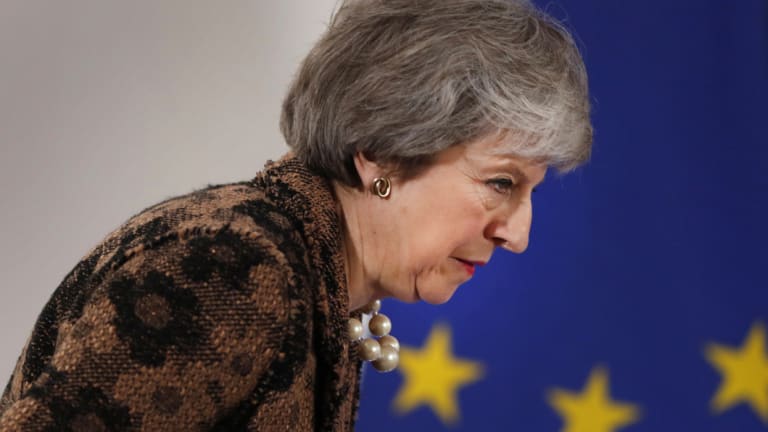 British Prime Minister Theresa May walks by the EU stars as she arrives for a media conference at an EU summit in Brussels.Credit:AP

The outcome, which the British press described as a humiliation of May, left her scrambling with no clear way forward as Britain hurtles toward its self-imposed deadline to withdraw from the EU in less than four months.

Instead of achieving a diplomatic victory in Brussels to salvage a chaotic week that nearly toppled her from power, May engaged in an ill-tempered spat with the president of the European Commission, Jean-Claude Juncker. He airily dismissed the idea of more negotiations on the deal known as Brexit.

In a bracing moment of candour, Juncker called May's hourlong performance in Brussels before other EU leaders "sometimes nebulous and imprecise."

Britain must be specific about what it needs, Juncker said, venting the frustration felt by European negotiators at May's tactics for more than two years. 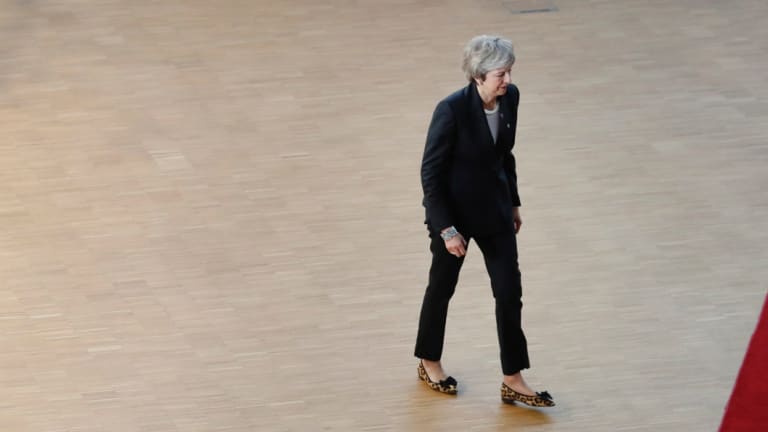 British Prime Minister Theresa May walks away after she spoke with the media at an EU summit in Brussels.Credit:AP

"I have no mandate to organise any further negotiations," said Donald Tusk, president of the European Council. Juncker said "we have to lower the temperature," but Tusk repeated that "we have to exclude any further opening of the withdrawal agreement."

Prime Minister Charles Michel of Belgium said that "very objectively, the signals that we heard yesterday are not especially reassuring about the capacity in Britain to be able to honour the engagement that was undertaken."

If, as predicted, Parliament rejects the 585-page divorce deal, there will be a renewed rush to win over British lawmakers who are concerned about the Irish border.

That would require not just reassuring words, which were readily available here Thursday and Friday, but more legally binding interpretive documents, of the kind used in the past to get around objections from parliaments of member states or regions. 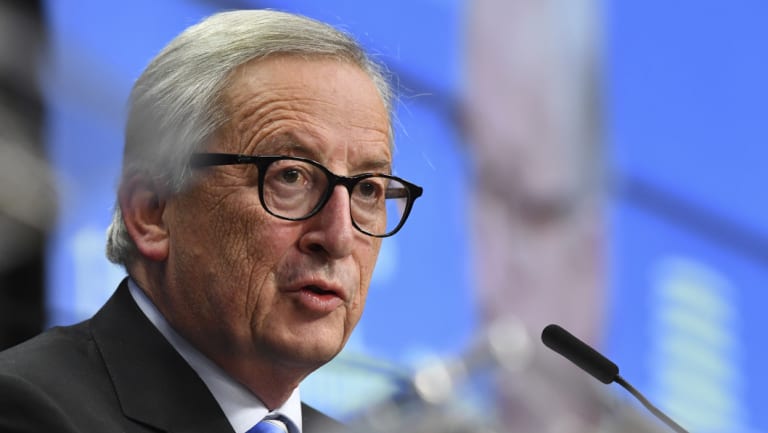 Those could be drafted and approved in another emergency EU summit in late January. Then, officials hope, the British Parliament might agree to the deal on a second vote.

The danger is that, after the latest debacle in Brussels, May could lose the first vote in Parliament by such a margin that the deal is effectively killed.

So May said on Friday that there would be more talks with the European Union, while putting her best gloss on the formal conclusions that emerged from the meeting, which were mildly encouraging and which, she said — rather stretching the point —"have legal status."

While Britain is scheduled to leave the European Union on March 29, mid-February seems more like the ultimate deadline. British lawmakers must pass supporting legislation and the European Parliament must ratify the deal.

Planning for a no-deal exit — which officials predict would be chaotic and economically damaging — will accelerate now, Juncker said, as did May.

A senior French official said the discussion on Thursday night with May, which included nearly an hour of questions and answers with her counterparts, was not acrimonious.

But others said that May was often interrupted, including by Chancellor Angela Merkel of Germany, who asked, "But what is it that you want?"

May's only hope is that growing concern about a no-deal Brexit will concentrate minds among British lawmakers so that they vote through her plan, however much they dislike it.

Yet many of her lawmakers are angry about the "backstop" plans to prevent physical checks after Brexit on goods at crossing the border between Ireland and Northern Ireland.

Under that plan, the whole of United Kingdom would stay in a customs union with the European Union until a long-term arrangement can be made, while Northern Ireland would be subject to even more of Europe's rules.

May wants legally binding assurances that this will be a temporary situation, and Britain will not be trapped permanently in a relationship that obliges it to obey rules it will have no role in shaping.

What she would like is known in diplomatic jargon as a "Joint Interpretive Instrument," a legal clarification of the meaning of the deal, separate from the agreement itself.

Experts argued that May had made another basic error by promising her own lawmakers something she had yet to secure from the European Union, and therefore gambling on the willingness of Brussels to help her.

Peter Ricketts, formerly the head of Britain's Foreign Office, said he had awaked to the news of May "appealing to others to help her out of dilemmas of her own making."

"I cannot understand why she weakly undertook in the Commons to get further legal assurances from the EU," he wrote on Twitter. "Setting herself up for failure that further diminishes the UK."