Why spring in February is a disaster for nature: Yes, it’s a joy to see butterflies and blooms burst forth this early in the year… but there may yet be a chilling price to pay, writes JOHN NAISH

On Sunday afternoon I was sitting in the garden in a T-shirt, taking a break from some urgent pruning. On a fallen tree trunk nearby a Red Admiral was basking, its pulsing wings blissfully warmed by the sun beaming down from a clear blue sky.

Just as it did again today — and, if the forecasters are right, for the rest of the week.

It is utterly gorgeous — but worrying. It’s only February, for goodness sake! We should all still be shivering in the depths of winter.

Instead, this past glorious weekend the roads around my home town of Brighton were rammed with sunseekers heading for the beach.

We tried to escape the melee by heading to a quiet country pub. Quiet? We had to queue for a table in the flower-dappled garden. It felt like a May bank holiday.

Nature clearly thinks that spring has sprung and then some. Parks and gardens are clad in golden daffodils. Snowdrops are in full bloom on our lawn. Witch hazel and honeysuckles are already emerging.

And I’m in a panic about pruning back our rampant fig trees. They should still be sound asleep, but instead they are budding wildly. 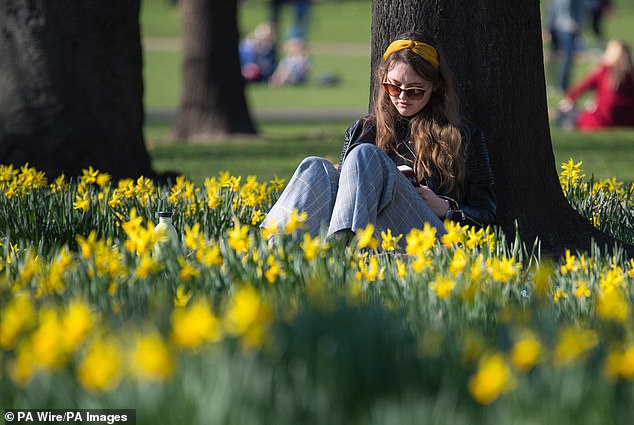 A woman reads among daffodils in St James Park, London, as many parts of the UK enjoyed unusually warm temperatures 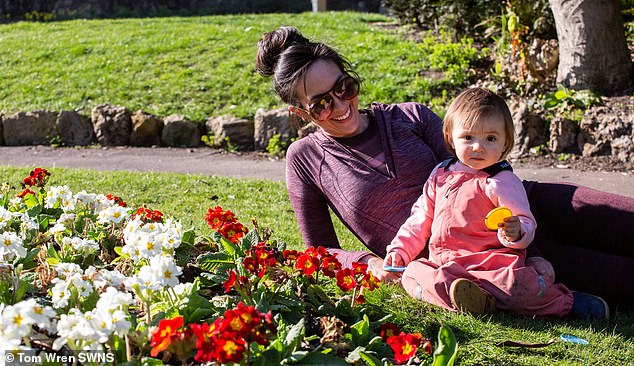 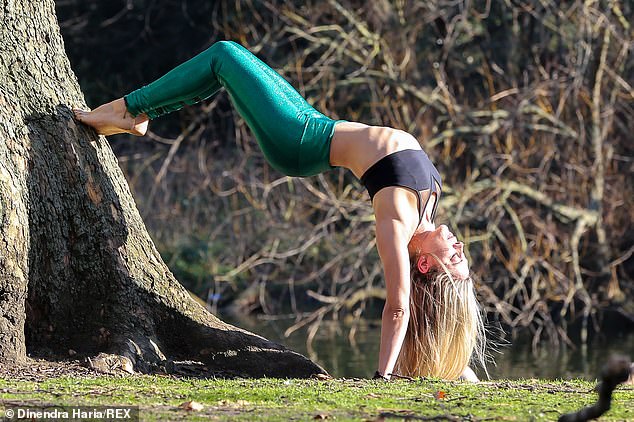 A woman takes the opportunity to practise her yoga skills with the support of a sturdy tree in St James’s Park, London

Around Britain the story is the same: some species of camellia are making a premature appearance, patches of wild primroses (usually March to May) and even early cherry blossom (March), while scabious, poppies and Virginia stock have stayed in flower since the summer, having apparently forgotten to die back, thanks to a balmy autumn.

The animal kingdom is stirring prematurely, too. Naturalists report that the dawn chorus — not usually heard until March — began at the start of this month.

Song thrushes are even belting out their mating calls, while bees have been tricked out of hibernation many weeks early. And as for that butterfly in my garden, well I’ve never spotted one so early in the year before.

For this latest burst of unseasonal balm — following a remarkably mild winter — we can thank a plume of warm southerly air sweeping up from the Canary Islands, sending temperatures into the high teens.

That is more than twice the normal February average.

In London’s Kew Gardens the highs have nudged 18c. ‘This year is particularly mild,’ says Guy Barter, the chief horticulturalist at the Royal Horticultural Society.

‘There are a lot of things in flower that you would not expect at this time of the year. Things are running ahead of normal.’

Indeed. The Met Office confirmed that today was the hottest February on record as temperatures reached 20.3c in parts of Wales. 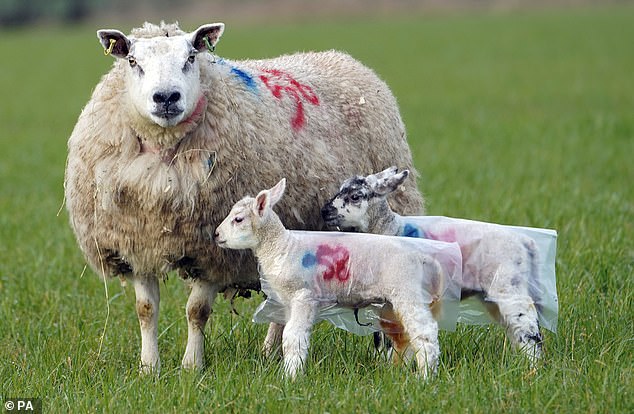 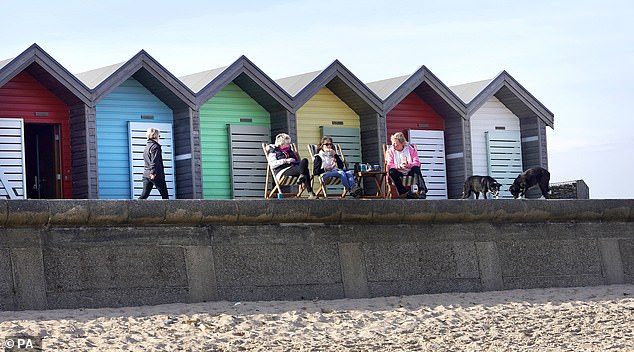 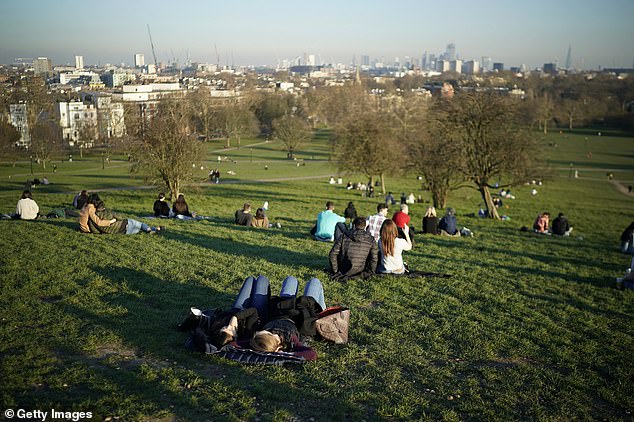 A plume of hot air from Morocco is behind the May-like conditions which are set to continue to Thursday at least (pictured: Primrose Hill)

But it’s not just the sunny West and South (19c) that’s ablaze. The warmest yet February day in Scotland was recorded last week when Aboyne in Aberdeenshire hit 18.3c on Thursday afternoon.

This beats the previous high of 17.9c recorded in Aberdeen in February 1897. (One wonders if they were fretting about climate change back then.)

All in all it made for a spectacular weekend for most of us — with the best part of another week of this weather to come — and will be welcome when we get our heating bills.

However, the unexpected warmth is sowing much confusion in the natural world and threatens summer harvests, especially for fruit growers.

Many of Britain’s plants have evolved to use winter’s cold to their advantage. In the same way that our bodies need eight hours of sleep in each 24-hour cycle, plants need a period of dormancy during the colder months if they are to thrive in spring.

This process, called vernalisation, requires a sustained period of cold — which the plants take as an instruction to re-set their biological clocks in preparation for a new healthy annual cycle.

For fruit trees, this is not just desirable but vital. Plants such as figs need about 300 chill hours when the temperature is between 0-7c to thrive. Softer fruit such as blackcurrants can require up to 2,000 chill hours to flower at the right time. 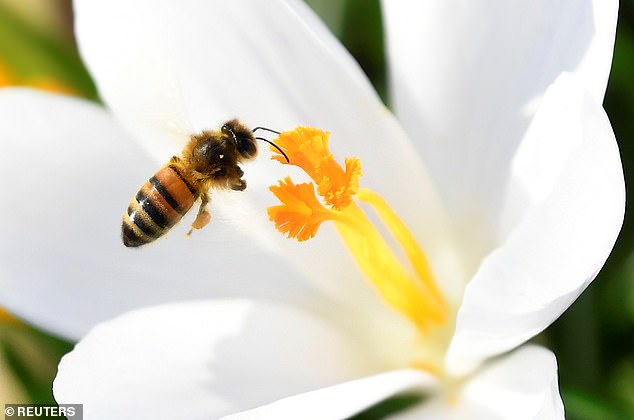 A bee takes pollen from a spring bloom in St James’s Park in London, as the Met Office confirmed that today was the hottest February on record 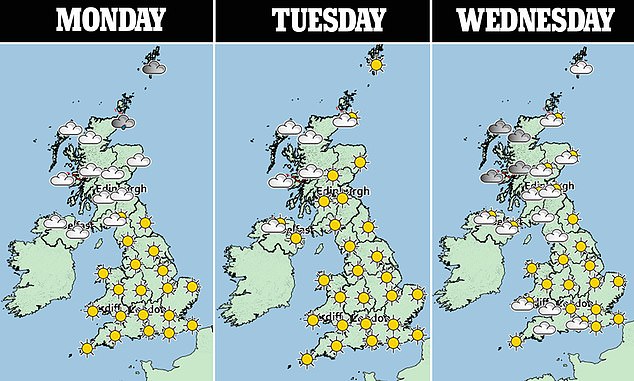 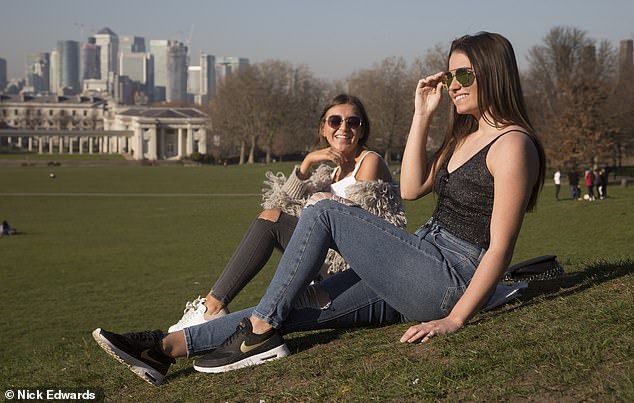 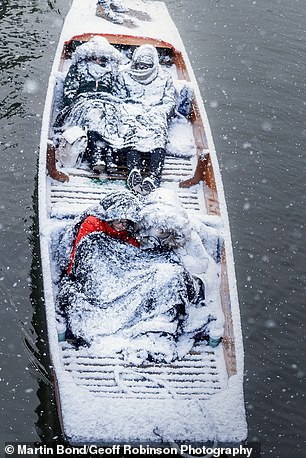 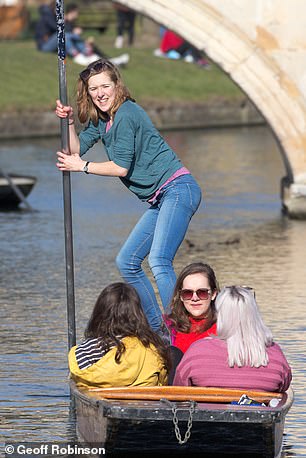 If the mild weather persists, fruit trees may flower too early — in March or April. ‘They would then be vulnerable to a sharp frost that would destroy their blossom,’ warns Barter. ‘If that happens, they would bear no fruit.’

And if apple, pear or blackcurrant plants flower early, they may do so at a time when there are fewer bees about, with a good chance they would not then be pollinated and so would not fruit.

It’s a huge worry for orchard owners — as well as Britain’s 40 or so commercial blackcurrant growers, who produce about 14,000 tons of fruit each year.

Butterflies may also suffer. The winter of 2015 was a warm one — and what followed was a terrible year for these insects.

Cold weather kills viruses and bacteria in the soil that many insects, including native species of butterflies and moths, are high vulnerable to. If temperatures stay relatively high, the microbes can decimate insect populations.

Data gathered by the UK Butterfly Monitoring Scheme, from more than 1,800 sites across the country over 37 years, shows higher temperatures affected more than half the species, such as the common blue, comma, peacock and small tortoiseshells.

There is then a knock-on effect on our native birds which, if they mate and lay eggs early, won’t be able to find enough insects to feed their chicks.

Analysis by conservationists of 30,000 nests over the past decade shows birds such as the chaffinch and the robin lay eggs about a week earlier than in the Sixties. A similar pattern has been seen for blue tits, great tits and swallows.

And if a proper cold snap should interrupt our mild winter in a month or so, vulnerable chicks could struggle to survive. 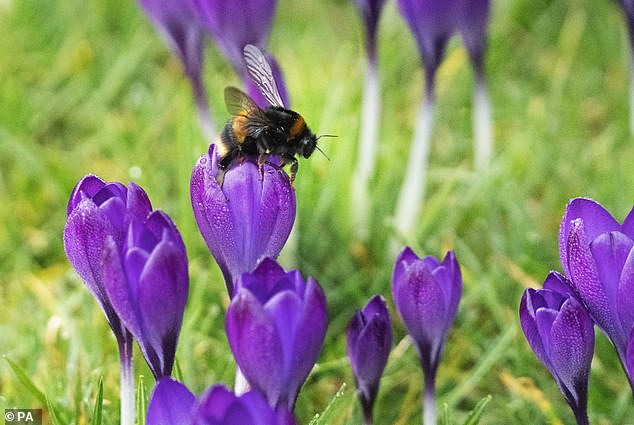 A bee collects pollen at National Trust’s Wallington Hall, near Morpeth in Northumberland, as thousands of crocuses have started to bloom weeks early after unusually high temperatures 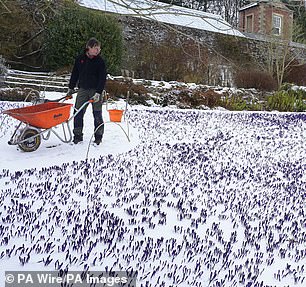 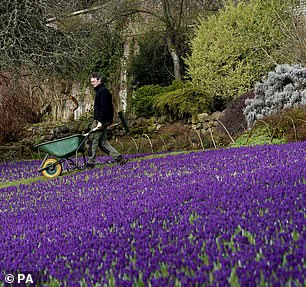 Last year Gardner Chris Orton tended to the Crocus garden at Wallington Hall in Northumberland as the wintry snap gripped UK. But this February thousands of crocuses have started to bloom weeks early after unusually high temperatures

Indeed, forecasters are warning that this warm snap may come to a bitter end.

Meteorologists predict that early March will bring fierce weather sweeping in from the Atlantic, with gales and snow blasting parts of Britain. Spring still holds an icy shard in its heart.

Indeed, the mild winter to date may be creating the same meteorological conditions that prompted the bitter blast of prolonged cold from Siberia — dubbed the Beast from the East — to come roaring in this time last year.

This involves a phenomenon called ‘sudden stratospheric warming’ where layers of air high in the stratosphere above us become unseasonably warm and the resultant change in pressure sucks in freezing air from Siberia.

Every plant, insect and bird that thought spring had come early would suffer if this is the case.

Gardeners and lovers of wildlife are keeping their fingers crossed that any cold snap in the next few weeks will be short — and may actually re-set Nature’s clock.

‘It would return fruit-tree flowering to its normal season and be welcomed by most farmers and fruit growers,’ Mr Barter says.

The price we may pay, though, is a depressingly bloom-free gap in spring. That’s a worry for the 450 residents of Thriplow in Cambridgeshire, who hope to celebrate their 50th Daffodil Fair.

Over the past five decades, they have planted more than half a million bulbs around the village and their annual fund-raising weekend near the end of March is a national event, with up to 14,000 people flocking to see the spectacle.

Last year, though, the entire weekend was laid waste by the Beast from the East.

This year, the number of daffodils could also be depleted.

‘Some daffs are already out in the village,’ says Paul Earnshaw, who is chair of the Fair’s charity committee.

‘Daffs do what daffs do. People say that you can hurry them up by putting a hairdryer on them — or more sensibly, by growing them under polytunnels.

‘But if they are coming up early, then you can’t stop them — you can only be glad to see them.’

Nevertheless, the village has developed another strategy to ensure a good display.

‘We spread our bets,’ says Earnshaw. ‘We have about 117 different varieties, which all come up at different times — from very early, like the variety called February Gold — to the latest such as pheasant eye, which won’t come up until April or May. Therefore, some should be out at the right time.’