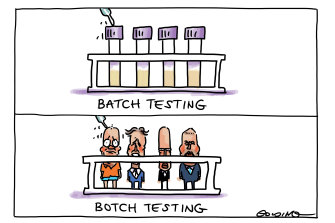 To submit a letter to The Age, email [email protected] Please include your home address and telephone number.

Let’s try to apply the empathy training principles described in your report (“We took five politicians to empathy training – here’s what happened”, The Sunday Age, 4/4) to the MP who has actually been told to undertake it, rather than to willing volunteers.

Understanding what empathy means is no guarantee that it will occur. I recall a relevant recent report by a forensic psychologist, who had worked with both victims and perpetrators of sexual abuse, explaining that one of the problems was that although the perpetrators could grasp the idea of consent, they simply ignored it
in practice.

Jacqueline Maley (“Disgraced MP’s number up but the PM’s numbers won’t allow it”, The Sunday Age, 4/4) clarifies why Andrew Laming remains within the Coalition fold. The whole sad charade surely has no hope of achieving a positive result if we’re naively relying on the old dog learning new tricks and using them in the real world.
Jenifer Nicholls, Armadale

A delightful reflection
What a delightful Faith reflection on Easter by Michael McGirr (The Sunday Age, 4/4). He oozes positivity and joy as he describes his Good Friday supermarket moment.

I love how he presents profound truths with earthy statements such as ″⁣a wounded person finds new life … We are all rising″⁣.
Kevin Burke, Sandringham

Stop the dithering
The AstraZeneca vaccine has been shown to protect against serious coronavirus disease, in which up to four of every 100 patients can die and many more need protracted medical help. This compares to the roughly four in 1 million people who develop serious side effects after vaccination.

Vaccination would appear to be a total no-brainer, so stop dithering and get on with it, so that we can develop herd immunity to this disease and begin to get our lives back to a more normal situation as soon as possible.
Cor Lenghaus, Armstrong

A double failure
Commenting on the Morrison government’s failed rollout of COVID-19 vaccines, public health expert Bill Bowtell told ABC radio on Friday that ″⁣a strategy without agreed targets, and time-limited targets, is not really a strategy, it’s more like a collection of hopes and words″⁣ (ABC, PM, 9/4).

The same comment could be made about that government’s refusal to set targets for reduction of carbon emissions, such as zero net emissions by 2050.

The government’s weasel words demonstrate its untrustworthiness, lack of interest in and incompetence to grapple with the two biggest issues of our time.
John Terrell, Thornbury

The guys have it
I have wondered quite frequently over the years why the male version for a ″⁣job description″⁣ is chosen for gender neutrality.

While many women may have accepted being called the ″⁣de-sexed″⁣ male title, how accepting would the male population be in use of the female version?

Concerning numbers
Wendy Squires writes in Sunday Life (“Single file”, The Sunday Age, 4/4) that a better word than “single” for relationship status is “independent”, and the ABS estimates that one-person households will rise by 65 per cent by 2036.

This is another reason for Australians to be concerned about the federal government’s impending responses to the aged care royal commission’s recommendations of rights-based reform.

As reported, people living alone value privacy, independence, freedom and self-reliance, which are only minimally available for older Australians in the current underfunded system, where aged care providers have been left by disinterested governments to dictate many of the terms.
Ruth Farr, Blackburn South

A deplorable desire
I read with shocked surprise the report (″⁣Explosive waste near highway″⁣, The Age, 9/4) of an unlicensed recycling operation in Ringwood. This is a stockpile of flammable waste that includes discarded batteries and airbag detonators.

The company’s laconic response to emergency services’ concerns from Recycal director Douglas Rowe states ″⁣we will fix what is needed″⁣.

This is a deplorable desire to put business success (money-making) before consideration of environmental concerns and the safety of residents in the area.
Elizabeth Gallois, St Kilda

But it’s not April 1
So, the federal government has ″⁣committed … $2 million to trial underwater fans to cool the water for a tiny proportion of the reef and is also investigating sun shields to reduce solar radiation as well as funding ‘coral gardening’ to grow and replace dead corals″⁣. (‴⁣⁣Clever Science’ can’t fix reef″⁣, The Age, 9/4.)

We’ve passed April 1, so it can’t be a joke, can it? Please tell me it isn’t real … please.
Anne Heath Mennell, Tenby Point