Health Secretary Matt Hancock has outlined a four-part strategy to tackle new Covid variants to lead the UK out of lockdowns.

He told MPs responding to new variants is “mission critical" in the long term fight against the coronavirus.

🦠 Read our coronavirus live blog for the latest news & updates 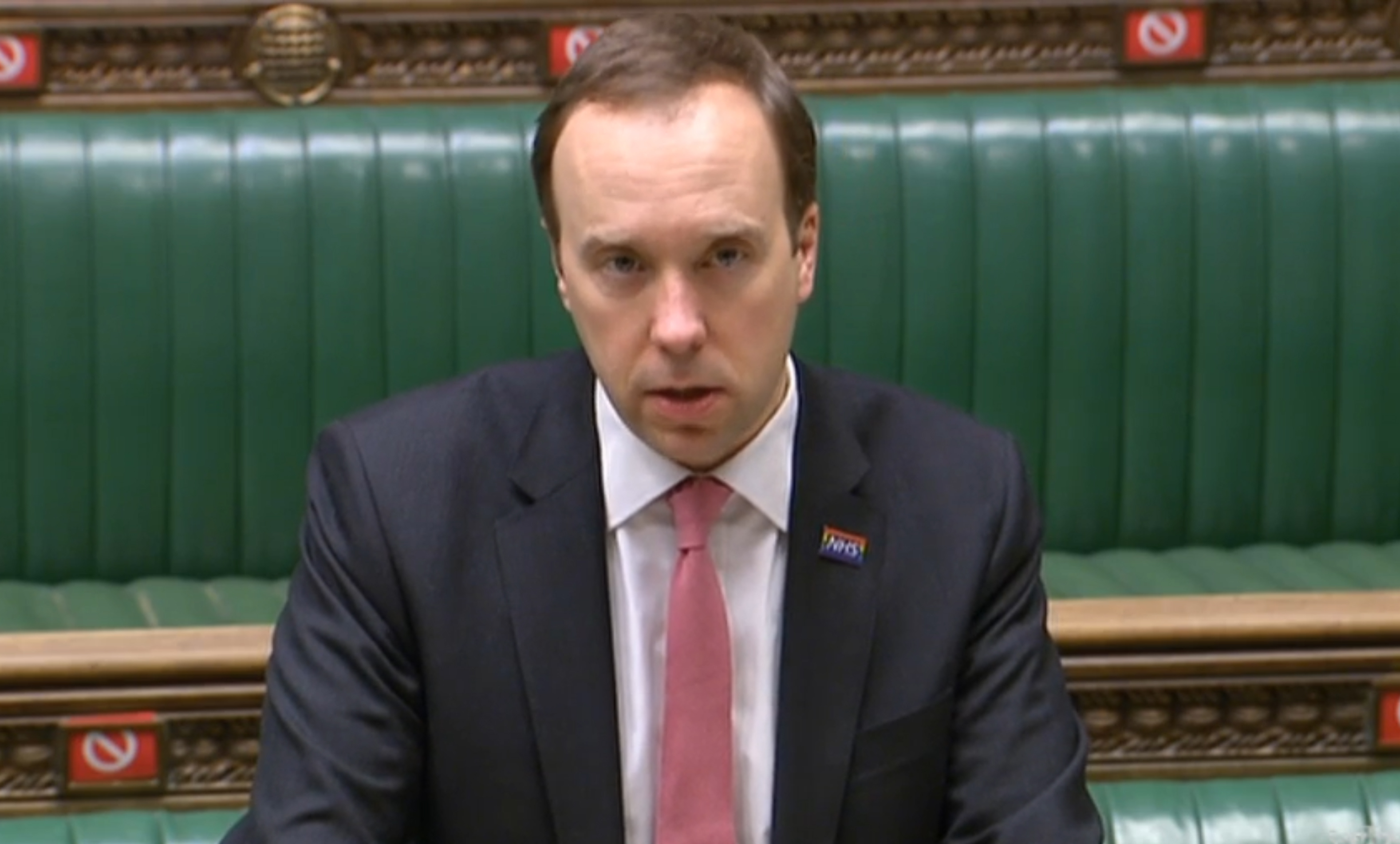 Mr Hancock said the UK is “turning a corner” in its efforts to tackle Covid-19, but warned the numbers in hospital and deaths were “still far too high”.

In a statement, he told the Commons: “Thanks to our collective efforts we are turning a corner.

“Cases of coronavirus have fallen 47 per cent in the last two weeks and they’re falling in all parts of the UK.

“But we’re not there yet. Hospitalisations are falling but there are still many more people in hospital than at the April or November peaks and the numbers of deaths, while falling, is still far too high.

“Coronavirus, just like flu and all other viruses, mutates over time and so responding to new variants as soon as they arise is mission critical to protect ourselves for the long term.”

He set out a four-part strategy to battle new coronavirus variants:

Reduce cases in the UK

Mr Hancock said “the lower the case numbers here, the fewer new variants we get”, adding that the work to lower domestic cases was “crucial”.

If cases continue to come down, it will help to reduce the R number – a measurement of how fast or slow the virus is spreading.

If the outbreak is shrinking, variants have less ability to thrive.

As well as this, the virus has a weakened ability to mutate if there are fewer people becoming infected.

Random mutations in the virus happen all the time, most often with no consequences.

But if transmission in the population is high, it only serves the virus more opportunity to mutate and raise the odds that one of the alterations could change how the virus behaves with serious impacts on the outbreak.

Lawrence Young, professor of molecular oncology at Warwick Medical School, said: “The more the virus does spread, the more it replicates, the more chances it has to change.

"One way of trying to put the can on the lid on the number of variants being generated is to try and control the spread of the virus.”

This has been the case with the Kent strain which emerged in September when cases were rising in the second wave. It is now the most dominant strain in the UK.

Scientific advisors have said Britain should “take the pain” of long term restrictions to reduce the risk of new mutations which need new lockdowns.

Professor Sir Ian Boyd of the University of St Andrews, a member of the Scientific Advisory Group for Emergencies (Sage), told The Times: “It stands to reason that the more people there are in the population with infections — the prevalence — the more virus that is replicating and the more chance there is of even highly improbable mutations happening.”

Rowland Kao, the Sir Timothy O’Shea Professor of Veterinary Epidemiology and Data Science at the University of Edinburgh, said: “These are conditions which we are entering now, as the number of vaccinated individuals increases.

“This is a natural consequence of any vaccination programme.”

In order to “come down hard” on the South African variant, Mr Hancock last week announced a mass testing programme in targetted areas of England.

Initially door-to-door testing was launched in eight postcodes where the South African variant was feared to be spreading.

But now it has been ramped up to X areas after people were found to have cases of an even more evolved version of the Kent strain.

Genomic sequencing involves scanning swabs from people tested to see if any of them have been infected with new variants, therefore keeping on top of the outbreak.

It also helps to detect new ones for the first time.

But genomic sequencing is only carried out on one in ten swabs to give a rough idea of how prevalent a strain is.

It means scientists can only have a rough idea of how many cases of the South African variant are in the UK.

The UK does around 50 per cent of the world’s genomic sequencing, according to the Government vaccines tsar Nadhim Zahawi.

He told Sky News last week there was a “library” of coronavirus mutations being stored to ensure the UK was ready to respond with updated vaccines.

Vaccines are the third part of the Government’s strategy to tackle variants, announced by Mr Hancock today.

He said: "Third is the work on vaccines to tackle variants as set out yesterday by Professor Van-Tam.”

Professor Jonathan Van-Tam, the deputy chief medical officer for England, said yesterday that variants of the virus were “inevitable”.
But in the same way “it’s almost inevitable that we would at some point need variations to the vaccine”.

He said a number of vaccine manufacturers – including Pfizer – had released data suggesting they still had a “substantial effect” in reducing serious illness from the South African variant.

He believed the same was likely to be the case for the AstraZeneca version, which has been shown in early data to be less effective against mild illness.

If the South African variant did become more prevalent in the UK, Prof Van Tam said people in high risk groups could be given an updated vaccine – with only a single shot likely to be required.
The UK has secured a deal for 50 million doses of a vaccine tweaked to work against new variants, set to arrive in autumn should it be necessary.

Every passenger must demonstrate a negative test result 72 hours before they travel to the UK.

And every passenger must quarantine for 10 days, either at their home or in a hotel room, depending on the country they have come from.

Passengers face fines of up to £10,000 for failing to quarantin.

And those who lie on their passenger locator forms about where they have been face up to 10 years in jail.

Mr Hancock said that UK residents returning from 33 red list countries will have to quarantine in an assigned hotel room for 10 days.

He said: “Before they travel, they’ll have to book through an online platform and pay for a quarantine package costing £1,750 for an individual travelling alone which includes the hotel, transport and testing.

"This booking system will go live on Thursday when we’ll also publish the full detailed guidance."

When passengers arrive, they will be escorted to a designated hotel. Sixteen hotels, with 4,600 rooms, have been secured so far.

Quarantined arrivals "will not be allowed to mix with other guests and there will be visible security in place to ensure compliance alongside necessary support", Mr Hancock said.

All international travellers, whether under home quarantine or hotel quarantine,  are required "by law" to take PCR Covid tests on day two and eight of their quarantine period.

“Passengers will have to book these tests through our online booking portal before they travel", Mr Hancock said.

He added that "arriving in this country involves a two-week process for all", and that leaving the UK for a holiday or leisure purposes is currently illegal.

Mr Hancock's strategy comes after Prime Minister Boris Johnson laid out the five steps needed before the UK can exit lockdown on January 27.

He said the overall picture of whether restrictions can be eased will be clearer in mid-February, when all the most vulnerable of society should have received their first vaccine dose.

“[In the week February 22] we intend to set out the results of that review and publish our plan for taking the country out of lockdown”, Mr Johnson said.

The plan will depend on five things; the success of the vaccination programme, the capacity of the NHS, reducing the R rate, reducing cases, and "deaths falling at the pace we would expect as more people are inoculated".