New York: After an internal investigation, The New York Times said on Friday it was wrong to trust a Canadian man whose account of Islamic State atrocities was a central part of its 2018 podcast Caliphate but could not be verified.

The series had won a Peabody Award, the first ever for a podcast produced by the newspaper, and was a Pulitzer Prize finalist. 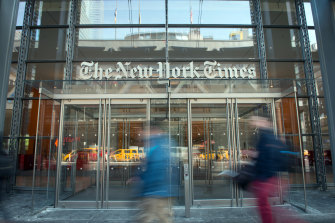 The New York Times said it should have worked harder to verify claims made by Shehroze Chaudhry.Credit:Bloomgerg

But The Times began to reexamine the 12-part podcast after Canadian police arrested Shehroze Chaudhry, who used the alias Abu Huzayfah, for perpetrating a terrorist hoax. His account of participating in executions and witnessing other atrocities had been included in the podcast.

“In the absence of firmer evidence, Caliphate should have been substantially revised to exclude the material related to Mr Chaudhry," The Times said in an editor's note on Friday. “The podcast as a whole should not have been produced with Mr Chaudhry as a central narrative character.”

The Times had ample reason to be suspicious of Chaudhry's account, since an episode of Caliphate was devoted to discrepancies in his story and its own fact-checking.

But the newspaper said on Friday it should have worked harder to verify the claims before deciding to make Chaudhry a central character.

Its journalists were “too credulous about the verification steps that were undertaken and dismissive of the lack of corroboration of essential aspects” of Chaudhry's story, the newspaper said.

The Times said it should have had an editor experienced in the subject matter involved in the series from the start. The main reporter on the podcast, Rukmini Callimachi, will remain with the newspaper but will be re-assigned, the newspaper said.

Callimachi said on Friday that it was “gutting” to let down her colleagues. She said she should have caught more of the lies Chaudhry told her, and tried to make clear what the newspaper did and didn't know.

“It wasn't enough,” she said in a statement. “To our listeners, I apologise for what we missed and what we got wrong. We are correcting the record and I commit to doing better in the future.”

Dean Baquet, The Times' executive editor, said in a podcast due to be posted later on Friday that he and other leaders at the newspaper should take blame for the incident.

Callimachi worked at the Associated Press from 2003 to 2014. The news organisation said on Friday that her reporting on terrorism “went through a rigorous editing process at all stages of the reporting and prior to publication. We stand by the stories.”

The episode raises questions about whether The Times' audio unit, which became more active about four years ago, is set up to apply the same journalistic rigour to stories that the text version of the newspaper does. The audio unit produces The Daily, one of the most successful podcasts on the market.

The newspaper on Friday published its own investigation into Chaudhry's claims, concluding he was a “fabulist” who concocted stories as an escape from his more mundane life in a Toronto suburb or living with grandparents in Pakistan.

There is still some dispute over whether he even travelled to Syria. Canadian officials say he never did, nor did he ever join the Islamic State, although American intelligence officials still have some doubt, the newspaper said. Investigators found that Chaudhry had passed along photos taken by others in Syria as his own.

No evidence has emerged to support his claims of participating in atrocities – shooting a man in the head and stabbing another in the heart before hanging his body on a cross, the newspaper said. Chaudhry's lawyer, Nader Hasen, said his client will “vigorously defend himself” against the Canadian charges. He had no comment about The Times' actions.

The Peabody Awards jurors are discussing what to do about its honour, executive director Jeffrey Jones said on Friday.