It’s a problem few of us face when taking ownership of a new property: what do you do with a statue nearly 20 metres tall of Kuan Yin, the Buddhist deity of compassion?

Businessman Paul Cook does not follow the teachings of Buddha but he is considering the potential bad karma of knocking down the concrete sculpture, which he bought in the distressed sale of a Reservoir temple that fell on hard times.

Mr Cook paid $9 million for the Linh Son temple, the former home of a thriving religious community near the Merri Creek in Melbourne’s north led by a robed monk named Master Dao. 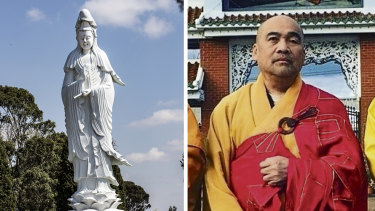 The statue of Kuan Yin and Master Dao. Credit:

The temple was put up for sale by receivers after a string of ruinous property investments left the society tens of millions of dollars in the red.

For his money, Mr Cook got 2.4 hectares of prime industrial land, as well as a grand archway, meditation centre and lotus pond that will all be demolished to make way for a row of factories.

But it’s the bodhisattva statue, which was brought over from Vietnam in 12 pieces and then rendered in its current resting place, that he has no idea what to do with.

Another temple, The Great Stupa of Universal Compassion in Bendigo, had shown interest in taking the statue. However the sheer size and cost of moving it by crane proved too much. 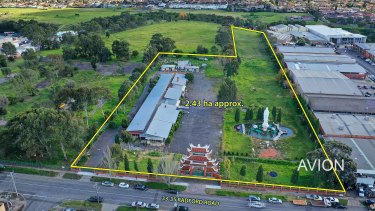 The temple grounds as shown in the real estate ad.Credit:

“I’ve tried everywhere to get rid of that statue because I don’t want to knock it over,” Mr Cook said. “Not that I’m a believer.”

It is said that Kuan Yin holds a vase in her left hand containing pure water capable of relieving suffering.

And for the followers of the Melbourne Linh Son Buddhist Society, it’s been a difficult few years leading up to their eviction.

Ten years ago, Linh Son had several thousand members and was celebrating a bold new vision for the future with the marble foundation stone for a grand pagoda that would never eventuate.

Now, the temple lies in ruins after its spiritual leader, Master Dao, went on a highly leveraged property spending spree that backfired spectacularly.

Before the financiers finally called in their debts, the society owned as many as 12 properties, perhaps more. Much of it was speculative development land.

The mostly Vietnamese congregation has scattered to other places of worship in Melbourne’s north and west. Some have crossed Merri Creek to pray at the Quang Duc temple in Fawkner, a picture of serenity compared to the now vandalised and graffiti-covered Linh Son.

“They spread everywhere, everywhere they go they talk about what happened,” said Chung Nguyen, a Linh Son member and former vice-president.

“Not only in Australia – in Vietnam, in America, everywhere around the world.”

Master Dao has kept a low profile after what happened to Linh Son, however there is plenty of speculation about his next move. 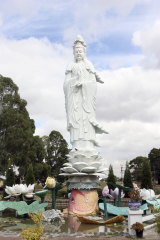 After the Radford Road property was sold, it is understood he offered to buy back some of the land at a reduced price but was rebuffed.

“He will look for another land to build a temple,” said Thich Nguyen Tang, a monk at the Quang Duc temple in Fawkner.

Before its collapse, Linh Son had big ambitions for growth.

The strategy was real estate, with a focus on Melbourne’s booming outer west, including 10 hectares in Melton South and 63 hectares in Mount Cottrell. There were also properties in Footscray, Noble Park and Beveridge.

Often the amounts paid were over the odds. Simran Khatrha, a real estate agent, described Master Dao’s attitude as a buyer as “they were asking $1, he’d pay five”.

“Maybe somebody promised him he can flip it, he can resell it, but nothing happened,” he said.

While the list of investments appeared impressive on paper, the debt proved too much. Documents filed with the charity regulator showed the society took in donations of $100,000 in 2018 and then just $5900 in 2019.

With interest rates as high as 96 per cent, an insolvency adviser tasked with helping the society with its finances in 2019 said it was like they were spending “Monopoly money”. 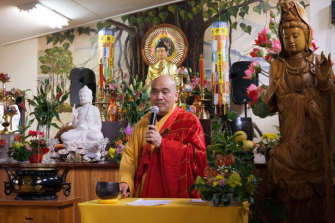 Master Dao, the spiritual leader of the temple.

The society found itself embroiled in legal action for missing repayments or failing to pay deposits, with separate court cases seeking payment of $27 million, $13.5 million and $4.6 million.

One by one, the portfolio was sold off or put up for sale, often under mortgagee possession. One property, a three-bedroom townhouse in Footscray, is on the market with a price guide of $890,000.

The reasons for Master Dao’s property gamble have never been made clear. When The Sunday Age called him this week, he refused to answer questions. A visit to his Fairfield property was also unsuccessful. Also known as Duc Thang Nguyen, he stepped down as president of the society after the investments tanked.

“I think Master Dao has been taken advantage of by all the brokers,” said Mr Nguyen, the former vice-president of Linh Son who claimed to represent Master Dao. “He’s got zero money, that’s the problem. How can afford to buy a lot of property?”

Meanwhile, the congregation is left to wonder what happened.

“They are very sad, everybody is stressed,” said Mr Nguyen. “All the community before trusted him and he did a mistake and now the whole community is scared.”

Mr Nguyen said the society would go to court to keep the temple. However Mr Cook, a multimillionaire former butcher, said he had clear title over the land and that it would be developed.

He also owns a $13.2 million property next door to the temple, the former Lakeside Secondary College, and has plans to turn the area into a food-processing zone.

It’s a long way from what the Melbourne Linh Son Buddhist Society imagined when they bought the land from the Kennett government in 1995.

“There was elation when that place was established,” said Buddhist Council of Victoria secretary Michael Wells.

“It’s certainly very sad for the community who were there and for venerable Dao himself.”

Have a Good Weekend all week

We deliver the best of Good Weekend to your inbox so it’s there when you’re ready to read. Sign up here. Sent every Saturday.