Nathan Rhodes has had his share of shoddy apartments: shoebox units in cheaply made buildings with dated decor.

But for the past few years, the 32-year-old finance professional has reaped the benefits of a growing shift in Australian high-rise living: hotel-inspired apartment developments. 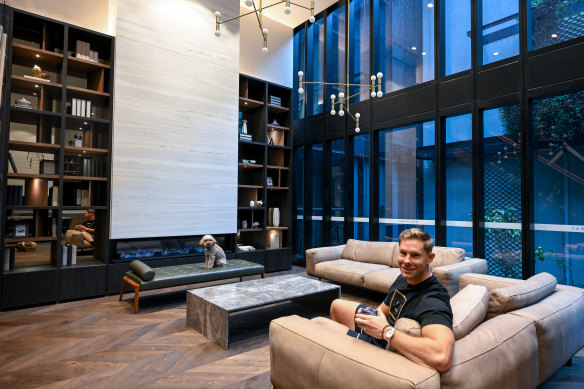 Nathan Rhodes, with his dog Lily, at the communal lounge in the Yarra One building.Credit:Eddie Jim

Since February 2021, he has rented in the 26-storey Yarra One building, just off Toorak Road in Melbourne’s South Yarra, which offers a lobby concierge, a Tesla car-share service, heated outdoor spas, a wine cellar, sleek health facilities including a gym, yoga room and sauna, and a ritzy communal rooftop with city views by a fireplace.

Experts believe these types of high-end developments, with services that mimic five-star hotels and borrow concepts from international cities where apartment living rules, will convince once-reluctant Australians to give vertical homes a go.

For Rhodes, who pays about $700 a week, the hotel-style features were “a massive drawcard”.

“It just gives flexibility around not only different spaces to work from, but it’s really quick to go to the gym in a break, and it’s super-convenient having a concierge who can accept any parcels any time,” he said. 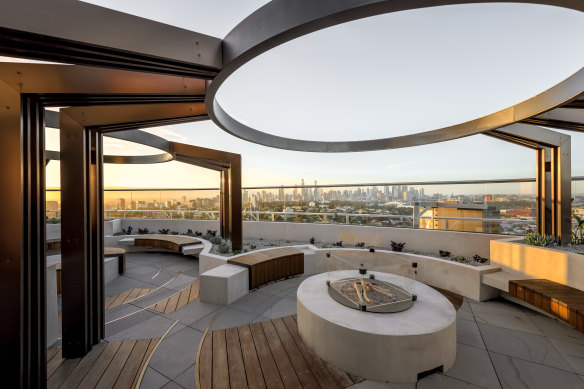 The Yarra One rooftop.

Rhodes also uses the building’s dining room for work events and dinner parties, and the basement dog wash for his toy poodle, Lily.

“I definitely get a lot of use out of the amenities,” he said. “And you don’t have the upkeep and responsibility.”

RMIT urban researcher Dr Louise Dorignon recently published research examining the trend of hotel-like apartments in Melbourne, which she said had come in response to the perception in Australia that apartments were inferior to suburban homes. 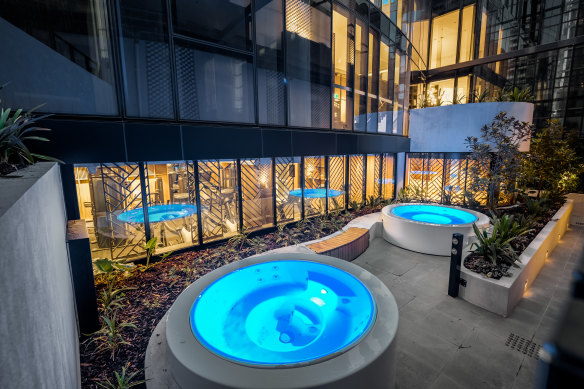 Developers had to differentiate new buildings from poor-quality, high-density structures, such as those with flammable cladding issues, Dorignon said.

“The elevation of the home-hotel to the status of desirable housing product casts a shadow on the traditional great Australian dream as provincial, unsociable, high maintenance and restricting mobility,” her research says.

“Many participants thought it reminded them of experiences of New York and Hong Kong,” she said.

However, she said that while this trend was promising because Australian cities needed more well-designed high-density living to limit unsustainable suburban sprawl, these apartments were not helping to solve the affordability crisis. Two-bedroom units can cost more than $1 million and yearly body corporate fees can be more than $10,000.

Residents could also be disappointed by a sense of lifelessness or unmet promises when moving into apartments, Dorignon said.

Rhodes said his main issue was that despite his proximity to parks, he felt he had a lack of green space.

Still, he said he would happily live permanently in a hotel-inspired apartment, especially given he wants to live in the inner-city.

“Where people might feel like their environment is a little bit stifled in a hotel, you don’t really have that problem because your apartment is still your own,” he said.

Samantha Surfield, 48, left the outer suburbs and moved into an inner-city luxury apartment last year to be closer to work after her two adult children moved out. She said she loved the lifestyle offered by the amenities, location and social community.

“Being an empty-nester I suddenly had this new life,” Surfield said.

Cbus Property chief executive Adrian Pozzo, who has luxury developments on Melbourne’s Spring Street and above Sydney CBD’s former David Jones building, said it had become “a given” for new apartment buildings to copy hotels.

Pozzo said having 24/7 concierge staff, who often had a hotel background, fostered a sense of comfort and security. 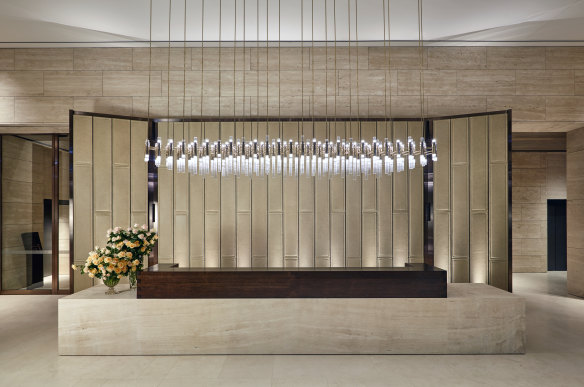 “If I want to go away, I know that when I come back my apartment is still there in one piece,” said Pozzo, who made the switch to an apartment five years ago.

“Ten or 15 years ago people might never have dreamed of buying an apartment, but now they aren’t just a stepping stone to something else,” he said. “People see it as, ‘This my home, and it can be for the next 20, 30, 40 years,’” he said.

Cheryl Wong, sales administrator for the Yarra One tower, said bringing hotel experiences to apartment developments “just makes sense”. At her building, apartments lock digitally instead of with a physical key, and there is a butler service for tasks such as cleaning and dog walking.

“It’s that feeling of being taken care of and having that feeling in your own home is another step up,” she said.

“A lot of people would probably think that they don’t need this, that they just want something simple … [but] there is a market out there that really craves something like this.”

Blake Schulze, national director for residential marketing at property group Colliers, said high-end hotel-like amenities were among the main deciding factors for apartment buyers. He said wealth was returning to cities, particularly in luxury apartment developments, after the easing of COVID restrictions.

“It’s a level of service offering that is there to assist the residents and simplify their life,” Schulze said.

“I think it’s a trend that’s here to stay. There’s strong demand for these developments and there’s just such a shortage of new supply.”