Sydney commuters are set to be affected by a series of rail strikes this month as tensions between the rail union and the NSW government continue to rise.

Locked in a stalemate with the state government over wages and safety issues, the Rail, Tram and Bus Union has released an “action calendar” with various strikes scheduled for August 7, 10, 17, 23 and 25.

On August 7, transport officers will refuse to give out fines. On August 10, a six-hour strike will take place on Sydney’s southern line, as well as Bondi Junction. 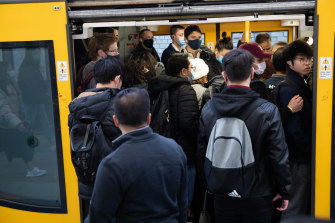 More strikes are on the horizon for commuters across the state.Credit:Janie Barrett

On August 17, a strike will take place on the inner west and regional lines with strikes on August 23 and 25 yet to be defined.

Throughout the month, cleaners will also stop using vacuum cleaners or scrubbing machines, and on some days there will be a ban on operating foreign-made trains.

The union’s NSW secretary Alex Claassens said the sporadic strikes would occur in one area at a time, meaning trains could continue to run in most areas.

“We’ve done everything by the book in order to get these vital safety changes, but the government is refusing to listen,” Mr Claassens said in a statement on Tuesday.

“This is our only way of making sure that the safety changes that need to be made will actually be made.

“We’ve had plenty of verbal promises before which is why this time we need to see it committed to in a binding document.”

The escalation of action comes after the union last week hit the network with a four-hour strike that ended at 4am on Thursday.

Last month the government tried to end the industrial action but the case against the union was dismissed by the Fair Work Commission.

Transport Minister David Elliott has been contacted for comment.