‘I’m stupidly optimistic. Even through those bad years I always believed there would be a happy ending’: The courageous but haunting words of brilliant author Salman Rushdie on his life in hiding from fatwa

One of the most celebrated writers of our time, Sir Salman Rushdie spoke of his ‘great surprise and delight’ when he was named in this year’s Queen’s Birthday honours list for services to literature.

The 75-year-old award-winning novelist described his elevation to the Order of the Companions of Honour in June as an ‘extraordinary honour’ and ‘a privilege’.

It was a crowning moment in an illustrious career overshadowed by the most extraordinary controversy the literary world has seen.

Founded in 1917 by George V, the Companions of Honour is awarded for long-standing contribution to arts, science, medicine or government. Rushdie certainly fits that bill.

The author of more than 20 books, the Indian-born, Rugby-educated, former advertising copywriter’s output is not only prolific but acclaimed. His third novel Midnight’s Children won the 1981 Booker Prize, and then the Best of Booker Prize winners in 2008.

But it was his controversial fourth novel, The Satanic Verses, which propelled him on to the front pages 34 years ago, turning him into a global name, figure of hate and target of death threats. 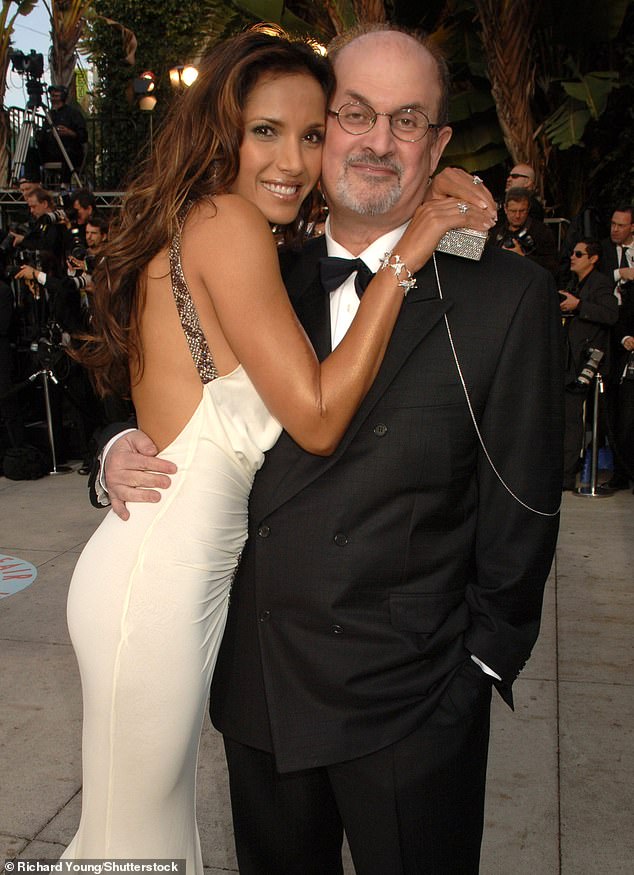 He has been living under the long shadow of fear ever since, even though his life has gradually returned to something approaching normality.

Five years in the writing, The Satanic Verses shook the world and ignited Muslim fury as protesters accused the author of offending their deepest religious beliefs; calling the magic-realist epic novel a ‘blasphemy’.

The complex and multi-layered plot focuses on two men, both Indian Muslims living in England, infused with Islam but confused by the temptations of the West. The first survives by returning to his roots; the second kills himself, destroyed by the inability to reconcile his spiritual needs and intellectual inability to return to the faith.

Rushdie was blindsided by the violent response to his novel, which he suggested was both about ‘migration, metamorphosis, divided selves, love, death’ and a ‘serious attempt to write about religion and revelation from the point of view of a secular person’. But following its publication in 1988, it was banned in several countries including Rushdie’s birthplace of India, where 12 people lost their lives in a riot in Bombay. There were violent demonstrations in Pakistan.

Some chains stopped selling the book, and copies were burned across the UK, first in Bolton where 7,000 Muslims gathered on December 2, 1988, then in Bradford in January 1989. In May that year, thousands gathered in Parliament Square in London to burn an effigy of Rushdie.

On Valentine’s Day in 1989, the Ayatollah Khomeini of Iran called for Rushdie’s execution by issuing a fatwa on him and his publishers – forcing the author into hiding for almost a decade, while translators and publishers were either murdered or the victims of attempted terrorist attacks. In October 1993, William Nygaard, the novel’s Norwegian publisher, was shot three times outside his home in Oslo and seriously injured.

A £2.7million bounty was placed on the author’s head, which resulted in Rushdie taking on a 24-hour armed guard under the British Government’s protection programme and moved from one safe location to another.

Novelist and friend Ian McEwan recalled: ‘The first few months were the worst. No one knew anything. Were Iranian agents, professional killers already in place in the UK when the fatwa was proclaimed? Might a ‘freelancer’, stirred by a denunciation in a mosque, be an effective assassin?

‘The mobs were frightening. They burned books in the street, they bayed for blood outside Parliament and waved ‘Rushdie Must Die’ placards.’

Rushdie came out of hiding in 1998 when new Iranian president Mohammad Khatami said it no longer supported the fatwa.

In 2012, he published his memoirs under his alias during that bleak time – Joseph Anton – a combination of the first names of two writers he loved: Joseph Conrad and Anton Chekhov.

But as recently as February 2016, it was reported that money had been raised to add to the fatwa, reminding the author that – for some – the Ayatollah’s ruling still stands. 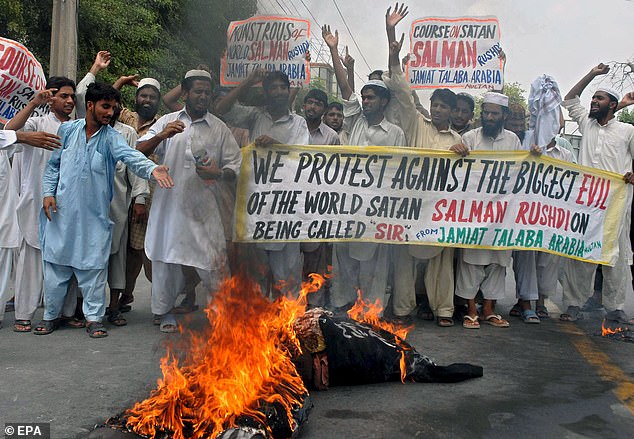 Students of religious party Jamiat Talba-e-Arabia burn an effigy of British author Salman Rushdie during a protest in Multan, Pakistan in June 2007

In recent years, Rushdie has tried to put distance between his life as a writer in New York now – where he became resident 20 years ago – and the events of almost 35 years ago.

‘I really resist the idea of being dragged back to that period of time,’ he said in an interview last year, adding that he hates being defined by it.

‘It destroys my individuality as a person and as a writer. I’m not a geopolitical entity. I’m someone writing in a room.

‘One of the benefits of being a writer, I think, is that if what you’re doing for a living is examining your life, hopefully by the time you reach this advanced age, you understand something about yourself and why you think what you think.’

As for surviving death threats, the fatwa, the years in hiding with his sanity intact, Rushdie added: ‘I am stupidly optimistic, and I think it did get me through those bad years, because I believed there would be a happy ending, when very few people did believe it.’

In another interview, however, he admitted he often thought about death. ‘I did, and now I think about it for a different reason, a slightly more inescapable reason,’ he said, referring to his advancing years.

The son of an Indian lawyer turned businessman, Rushdie was 14 when he was shipped off to boarding school in Britain. He turned to writing in the 1970s after a successful career in advertising during which he came up with the cream-cake slogan, ‘Naughty but Nice.’

Acclaimed for his magic-realist style, he was a rising star in the literary world, expected to set the world alight with each new offering – though with The Satanic Verses, it was not in the way he ever imagined or intended. Novelist and friend Martin Amis once wrote: ‘Salman had disappeared into the world of block caps. He had vanished into the front page.’ 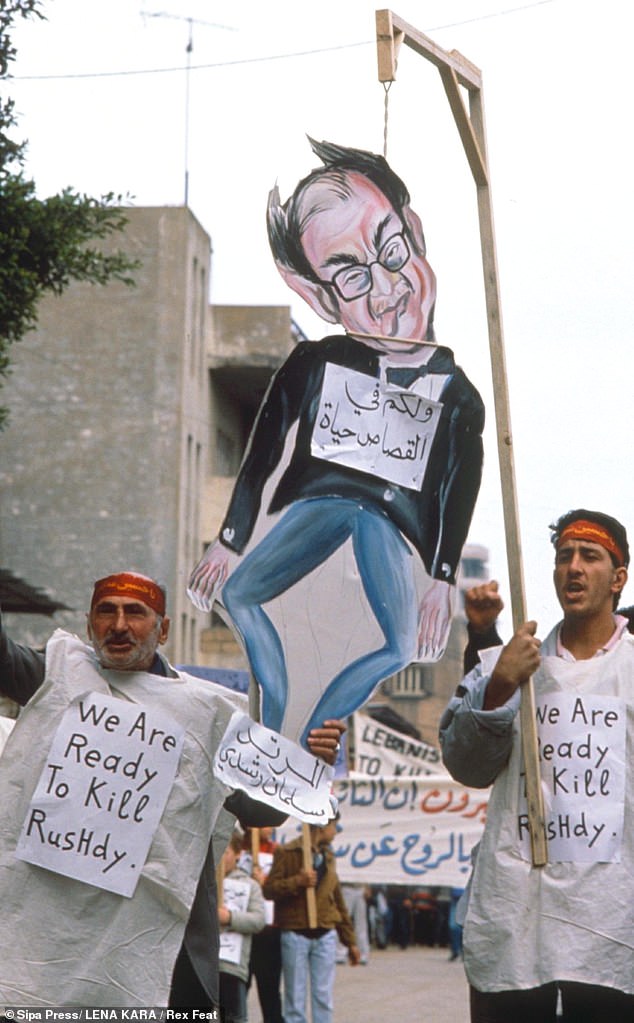 Protester with ‘we are ready to kill Rushdie signs’ and an effigy with him on a hanging noose in Beirut, Lebanon in 1989

In fact, he had moved with a Special Branch protection team to a hotel in the Cotswolds for his own safety.

That same evening, Channel Four broadcast a pre-recorded interview with Rushdie, in which he said: ‘If you don’t want to read a book, you don’t have to read it. It’s very hard to be offended by The Satanic Verses – it requires a long period of intense reading. It’s a quarter of a million words.’

Four days after the fatwa was issued, he apologised: ‘I profoundly regret the distress the publication has occasioned to sincere followers of Islam.’ Khomeini rejected the apology.

He said that even if Rushdie repented and ‘became the most pious man of all time’, it was still incumbent on every Muslim to ’employ everything he has got’ to kill him.

Ever the optimist, Rushdie was able to speak of the ‘fun side’ of his global notoriety and became equally as famous for his love life and ‘party boy’ image – which he insists was wildly exaggerated – which emerged after he came out of hiding.

Four times married, he has a son Zafar with first wife Clarissa Luard. They divorced in 1987, just before the publication of The Satanic Verses, after he left her for bohemian Australian author Robyn Davidson. 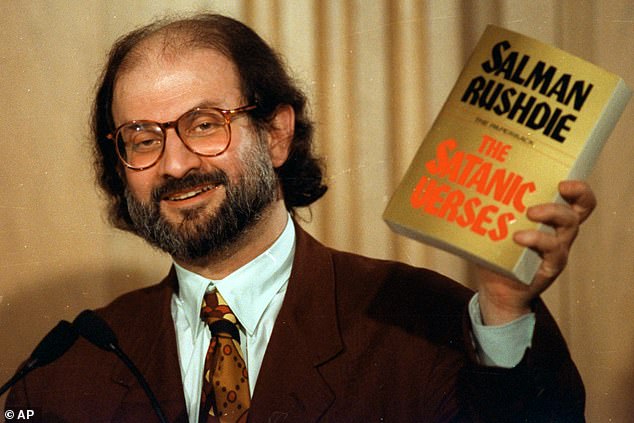 Author Sir Salman Rushdie holds up a copy of his controversial book, “The Satanic Verses” during a 1992 news conference in the US in June 2007

Following that two-year romance, he married American novelist Marianne Wiggins. Their marriage lasted five years and in 1997 he married publishing assistant Elizabeth West, whom he met while in hiding and with whom he has a second son, Milan.

The marriage collapsed when he met Indian-born model Padma Lakshmi. Their 2004 marriage lasted three years. Today, his partner is said to be American poet and artist Rachel Eliza Griffiths.

Despite having lived under the shadow of a fatwa for so long, Rushdie is a fierce defender of freedom of speech and has spoken of his abhorrence of today’s creeping ‘cancel culture’.

Comfortable in the spotlight, he has learned to embrace his fame in more unexpected ways – including a cameo in the film Bridget Jones’s Diary. In 2017, he made another cameo on Larry David’s sitcom, Curb Your Enthusiasm. Rushdie – making fun of his ordeal – tells Larry, who has also had a fatwa issued against him, that there are pluses – women would flock to him.

‘At first I thought, you know, ‘How funny is this really?’ And then I thought, ‘OK, there’s a point in my life when it would not have been funny, and the fact that we can now send it up is a good thing.’

Now, as the victim of a brutal knife attack, hopefully that optimism was not misplaced.