Australian women, men and children gathered in capital cities and towns around the country on Monday calling for equality and justice. 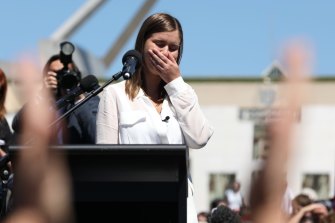 Readers praised former Liberal staffer Brittany Higgins, pictured at the March 4 Justice in Canberra, for speaking up about her experience. Credit:Dominic Lorrimer

The March 4 Justice protests followed a month during which headlines and politics have been dominated by allegations of abuse suffered by women. Among them claims several Liberal women had been assaulted by the one male colleague, and the surfacing of historical rape allegations against Attorney-General Christian Porter, which he vehemently denies.

With the crowds on Monday, came mixed emotions.

For readers following The Age and the Sydney Morning Herald’s live coverage of the marches, there was a sense of optimism that perhaps this, now, could be a turning point for women. But overwhelmingly there was frustration that the same old, tired battles were still being fought.

beproactive: “How many years will it take for women to feel safe, to have equal pay, to not have to ask permission to march, to be believed when a crime is reported? Why are we still having to fight for these basic human rights? I salute the bravery of the young women who have shared their stories but I feel sad that all these years after the women’s movement began, these battles are still being fought.”

Bridget84: “My whole life I’ve seen woman after woman who has come forward to say a crime was committed against me, be subject to a justice system and a society that says ‘but was it really?’ And why were you there and how is this your fault? I’m tired, I’m so damn tired.”

Bin chicken: “It’s all about respect.”

LikeThatGirlMarloThomas: “Was an honour and a privilege to rally with mothers, sisters, daughters, wives, aunts.”

Fitzy26170: “Thanks for the photos. The very large rally in Melbourne was moving and powerful.”

SKB: “These women are the true heroes of the nation. I am one man who pledges to stand with them.”

There was an outpouring of respect and gratitude for two women in particular, former Liberal staffer Brittany Higgins and Australian of the Year Grace Tame, for speaking up about their experiences.

Higgins, who alleges she was raped on a couch in her Minister’s office by a male colleague in early 2019, addressed the crowd at the Canberra march.

“My story was on the front page for the sole reason that it was a painful reminder to women that it can happen in Parliament House and can truly happen anywhere,” she said.

Praising Higgins, reader Splash wrote: “Agree it is unfathomable we are still fighting this ‘same stale, tired fight’. And shameful too. Thank you for your bravery.”

Middle aged balding white man: “She is all class. She should definitely run in Cook as an independent. Then we can see if Morrison really does believe her.”

Thucydides: “Are not Higgins and Tame extraordinarily eloquent and logical?…Could they not form a political party between them? Call it the Bleedin’ Obvious Party……..My guess is they would wipe the floor with the major parties, WA-style.”

Visagie: “Brittney Higgins should be the Minister for Women in any federal government, Labor or Coalition, because she says it like it is.”

Senior reporter Jewel Topsfield, who covered the Canberra march, says while the “rage was palpable”, there was also a sense that the country is facing a reckoning over sexual assault and discrimination against women.

“The protesters were not just political activists championing progressive causes,” she says.

“One single mother in her early 50s, told me she had never attended a march before, but was moved to drive to Canberra from Wollongong, because she felt that Higgins could have been her own daughter.”

Scott Morrison’s decision not to attend the rally angered many readers. The Prime Minister instead invited a small delegation of protest organisers inside Parliament House to meet him – an offer they declined.

Later in Parliament he outlined the actions his government is taking on the issues raised in the March 4 Justice petition. He also lauded Australia’s “vibrant liberal democracy” that allowed peaceful protest.

These words astounded many readers.

SW: “Is the PM implying we should be grateful that we protesters aren’t being shot? Wow, talk about condescending, dismissing and TOTALLY MISSING THE POINT. He wilfully refuses to hear the howls of rage and pain coming from women and girls all over Australia.”

RM: “Women may get raped but at least we don’t shoot them for speaking out. Good point, Scotty from Marketing. That should silence the whingers. How good is Australia?”

philgil: “It sounds like it’s time for ‘Jen and the girls’ to have another family chat with the PM. He still doesn’t seem to get it.”

windmill: “I can only presume that he didn’t have the smarts to ask Jenny first if he should use that appalling bullets and marches line. NO NO NO Scomo. What on earth were you thinking of. Seems like you weren’t thinking at all.“

softly softly……: “Morrison stayed inside as he seriously thought it would be a bad PR move if he took one step outside the confines of Parliament. How cowardly of you, Scott Morrison. Albanese described Morrison to a T. Morrison and his ministry is all about political management, nothing more, nothing less.”

Newshound: “Scotty from Marketing has just shown his true colours by not even addressing the crowd. It is time these crimes and indignations against women are stopped in their tracks. Action is needed that embraces and supports women in any workplace.”

However some readers thought the anger was misdirected: there is only so much the federal government can do on the issues raised.

phil: “Amongst all the emotion, and obviously this is incredibly emotional for all people, but particularly for women and girls – there needs to be some practical outcomes. Whilst some of those issues can be addressed in Canberra, there is equally as much to be done at state level across the nation. Lampooning just Morrison might make people feel better for a moment, but it won’t change anything, by itself. People give him too much credit/blame. This is bigger than him, bigger than one party, bigger than one state.”

Nixon: “So much anti-Morrison commentary. There is absolutely nothing Morrison could have said today that would have made one iota of difference. He could have stood on the steps of Parliament with 55 recommendations carved in stone and it would not have appeased his detractors.”

Bruce: “This not a government problem to fix. Politicians will not fix this issue. Marching to Parliament House is a complete waste of energy. They can band-aide the problem with numerous education programs. This is a generational social problem and needs to start with our kids education, and it is incumbent upon us as community members to instil an attitude change within them.“

Paddy: “Not sure what the government is expected to do. There are already laws in place. Parents and teachers encourage and foster children to be respectful and lawful as they grow up into adulthood. And some will become criminals and it’s the government’s fault?”

Andrew-Reservoir: “So what do the protesters want exactly? Gender equality? How? Cultural change? How?”

Topsfield says the task ahead was to harness the rage and implement meaningful reforms that will reduce the level of sexual assault and discrimination.

“This is the hard part, and as some readers observed, the challenge will be to develop a coherent list of what needs to change and continue this fight long after the dust from the marches has settled,” she says.

When some readers asked what would have been gained by Morrison attending the rally, other readers were quick to reply.

Pjma42: “He would HEAR what they are saying.”

Pen: “It would demonstrate his willingness to listen. It would show he had some actual courage and that he actually cared about the women of Australia.”

It is clear some among the crowds were listening.

Tony’s Fridge: “I went to the Canberra March today. This won’t be going away and that’s from an old, white, boomer male.”

Replying to Tony’s Fridge, Ian wrote: “Nor should it, until we men, (and I am one) treat women better.”

Online readers of The Sydney Morning Herald and The Age made 30,632 comments on 518 stories in the past week.

Most-read by subscribers in the past week