Battle royale: Thai pro-democracy protesters fight with royalists on the streets of Bangkok amid calls to curb powers of billionaire king as he makes rare visit

Thai protesters fought with royalists in the streets of Bangkok today as the country’s billionaire king prepares to ride through the capital in a motorcade amid growing calls to end his untouchable status.

Hundreds of pro-democracy protesters staged a show of force today as they assembled at the city’s Democracy Monument to demand the prime minister’s resignation and a new constitution, giving their trademark three-finger salute and tearing up flower beds which were meant to prevent crowds.

But monarchists staged a counter-rally, wearing royal yellow and waving Thai flags as they faced off against the demonstrators before a fistfight broke out in the streets.

Some protest leaders have called for the abolition of royal defamation laws – which allow for 15-year jail terms for critics of the monarchy – and a proper accounting of the king’s estimated $60billion fortune.

King Maha Vajiralongkorn, who spends much of his time in Germany, greeted supporters last night after returning to Thailand for a public holiday and is due to be driven around the Democracy Monument later. 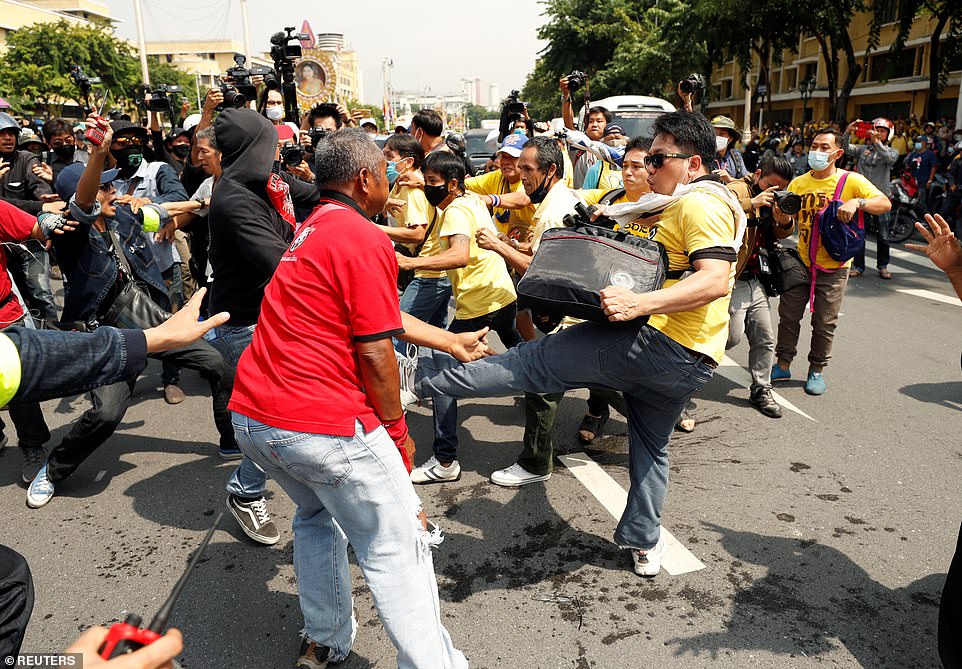 Fighting in the streets: A pro-democracy protester, left, clashes with a supporter of the Thai monarchy, wearing royalist yellow, amid rival demonstrations in Bangkok today before the king is due to appear in a motorcade 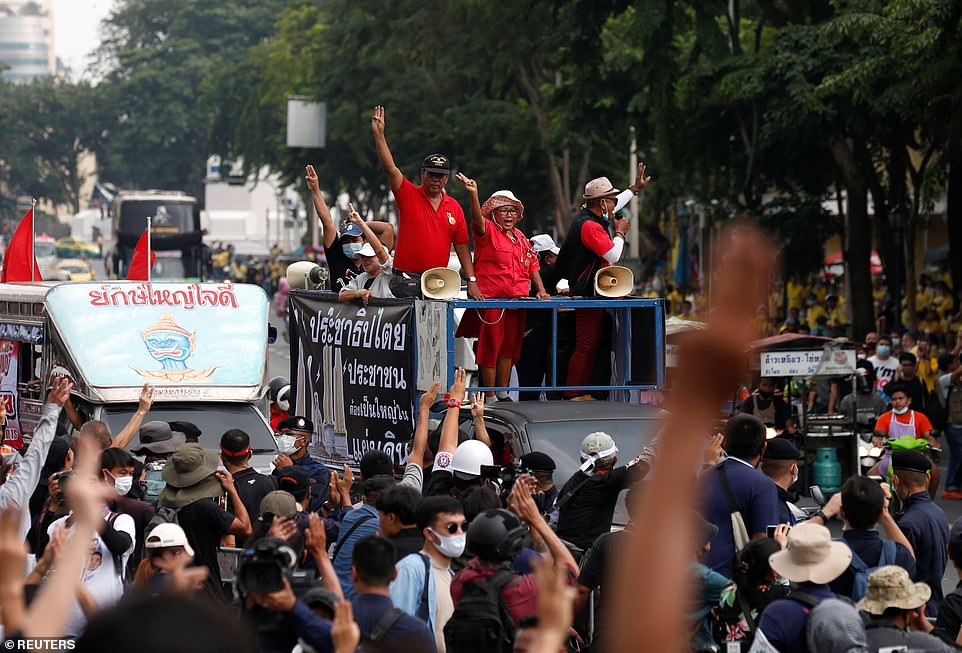 Show of force: Pro-democracy demonstrators give their trademark three-finger salute as they wave from the roof of a vehicle in Bangkok today in the latest public protest against the Thai establishment 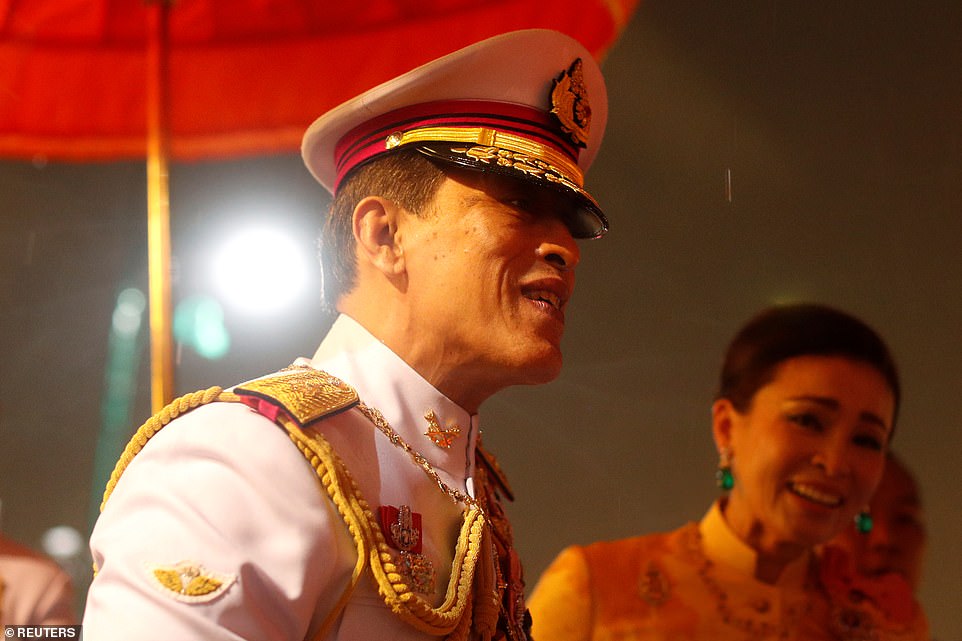 Tensions have been simmering for months after a series of pro-democracy rallies which have prompted a backlash from the kingdom’s royalist elite.

While the protesters deny wanting to abolish the monarchy, conservatives are suspicious and more than two dozen activists have been arrested for sedition.

Some demonstrators have openly called for the king’s constitutional powers to be curbed and the defamation laws to be abolished.

There are also calls for him to transfer back the personal control he took of some army units and a palace fortune valued in the tens of billions of dollars.

Protesters at the Democracy Monument today gave their trademark three-finger salute as they called for the departure of PM Prayuth Chan-ocha, a former coup leader.

The demonstrators tore up plants which had been laid in a failed attempt to keep crowds away from the statue, which has become a focal point of unrests in recent months.

Royalists assembled only a few dozen yards away, and the two factions faced off across the street before coming to blows hours before the king’s arrival.

‘Down with dictatorship. Long live democracy,’ the marchers chanted as they moved off from Democracy Monument towards the city’s Government House, the prime minister’s office.

Bangkok police commander Phukphong Phongpetra was surrounded by demonstrators who hurled water and yelled insults when he tried to disperse the crowds earlier.

On Tuesday, the protesters clashed with police and pelted them with blue paint as officers battled to clear the area ahead of a royal motorcade. 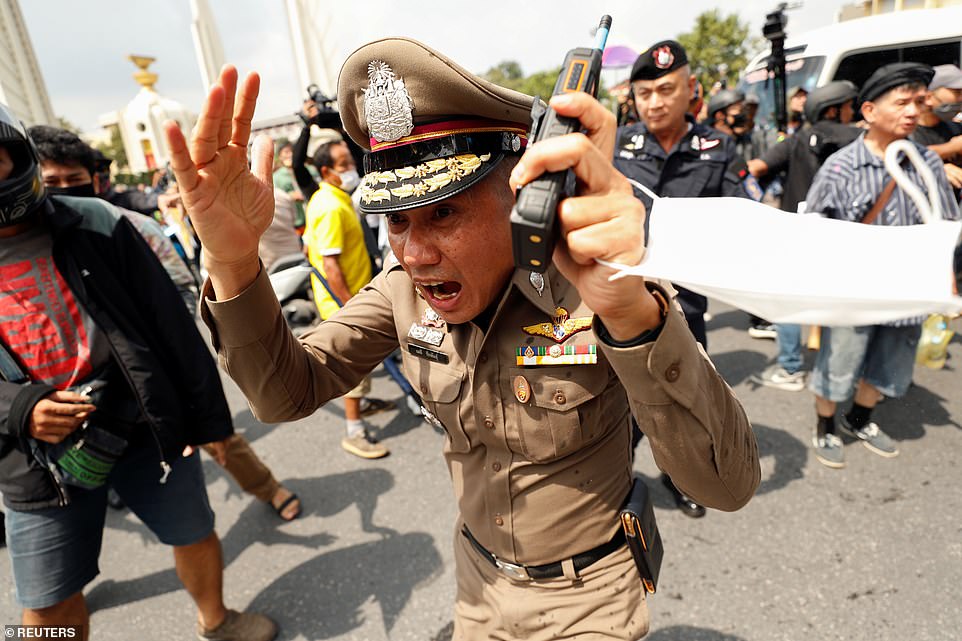 A Thai police officer reacts during clashes between pro-democracy demonstrators and royalists, with nearly 15,000 officers deployed to keep order on the 47th anniversary of an infamous student uprising 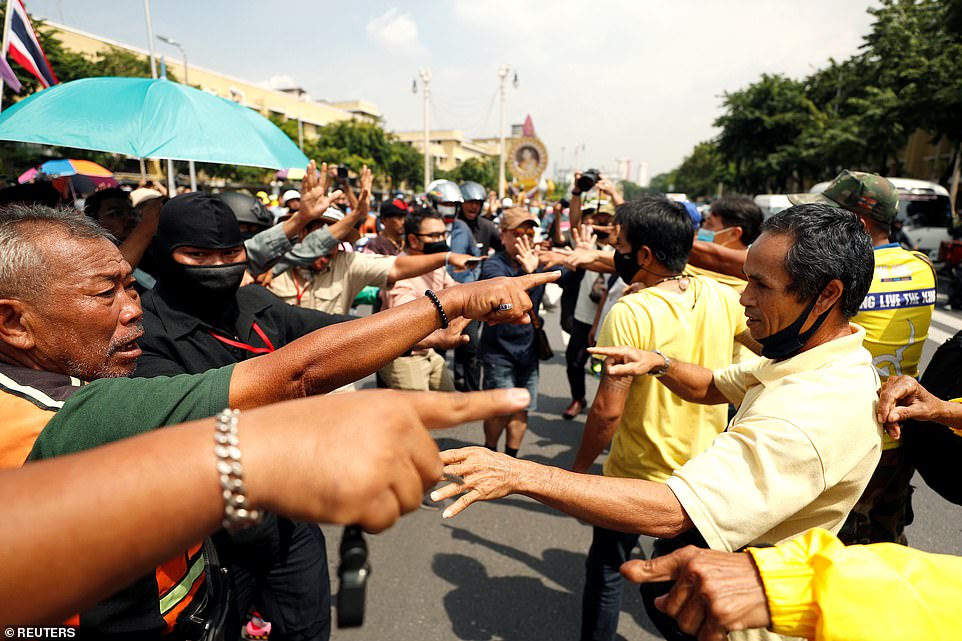 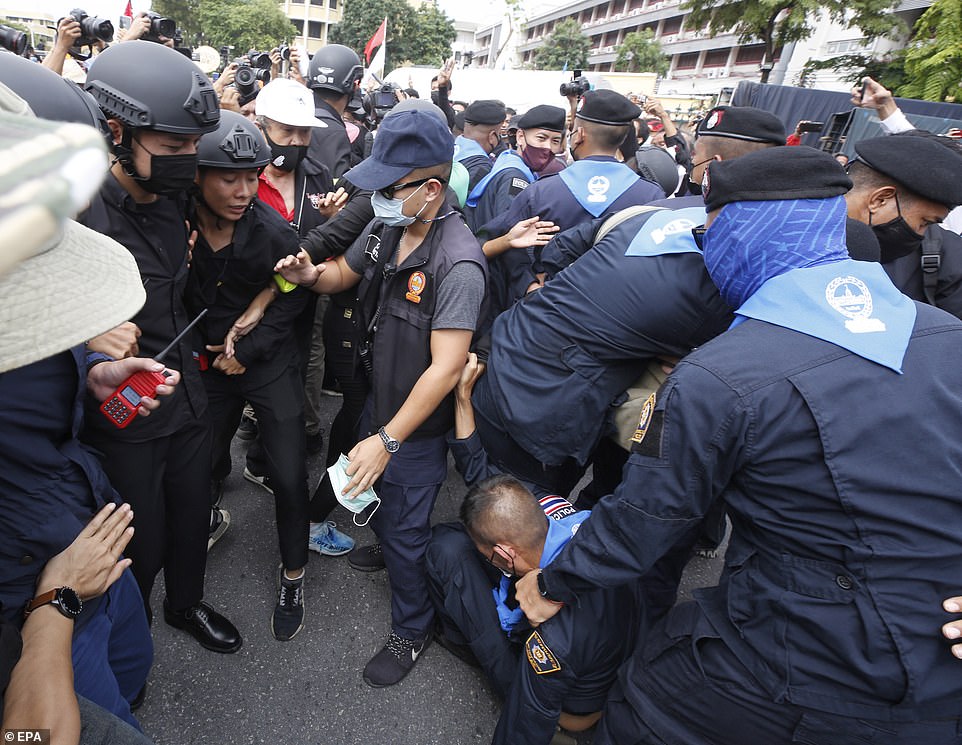 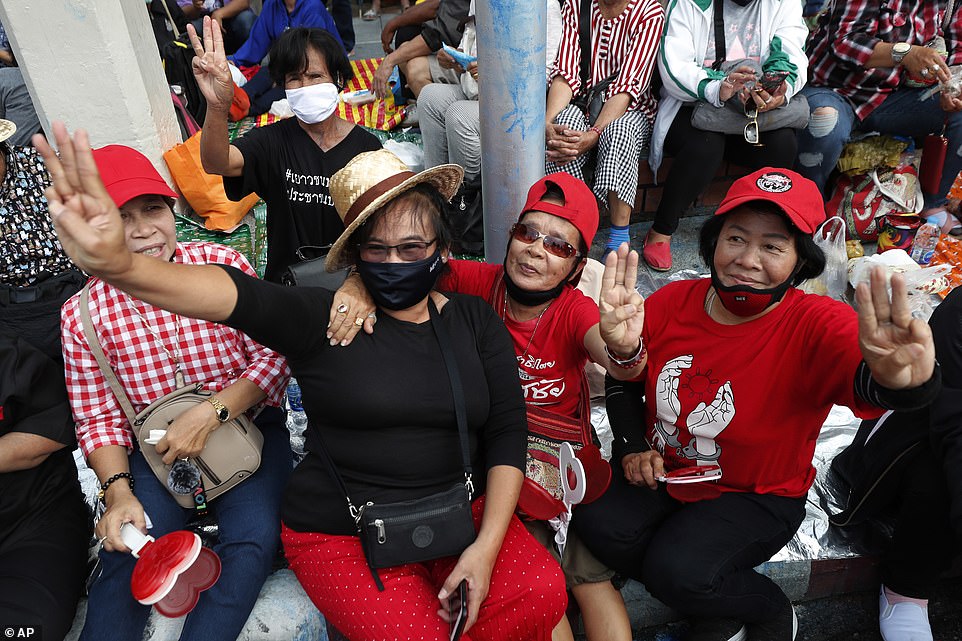 Anti-government protesters raise three-finger salutes, a symbol of resistance, during a protest near the monument today

Tuesday was a public holiday to mark four years since the death of the king’s widely respected father, King Bhumibol Adulyadej, who reigned for seven decades.

The current king, who is thought to have spent much of the pandemic in an Alpine hotel in Germany, made a rare visit to Thailand for the occasion.

The protest leaders say they will make way for the king’s motorcade, and police say they are confident they can control the crowds with nearly 15,000 officers.

‘We are out here to fight, with respect to all the people as well as the monarchy,’ protest leader Anon Nampa told the crowds. ‘We’re out here to call for a reform to the institution to better the country.’

Royalist leader Buddha Issara said the protesters could demand democracy, but must not call for reforms of the monarchy, as some have done.

‘They must not touch on the institution,’ he told reporters. ‘We will not accept any booing or raising three or four fingers during the motorcade as well.’

Protesters made a rare direct challenge to the king on Tuesday, chanting at his passing convoy after 21 activists were arrested during scuffles with police. Police said detainees would be charged with public order offences on Wednesday.

‘Thailand’s international friends should call on the government to stop arresting peaceful protesters, listen to their views, and allow them to freely and safely express their visions for the future.’ 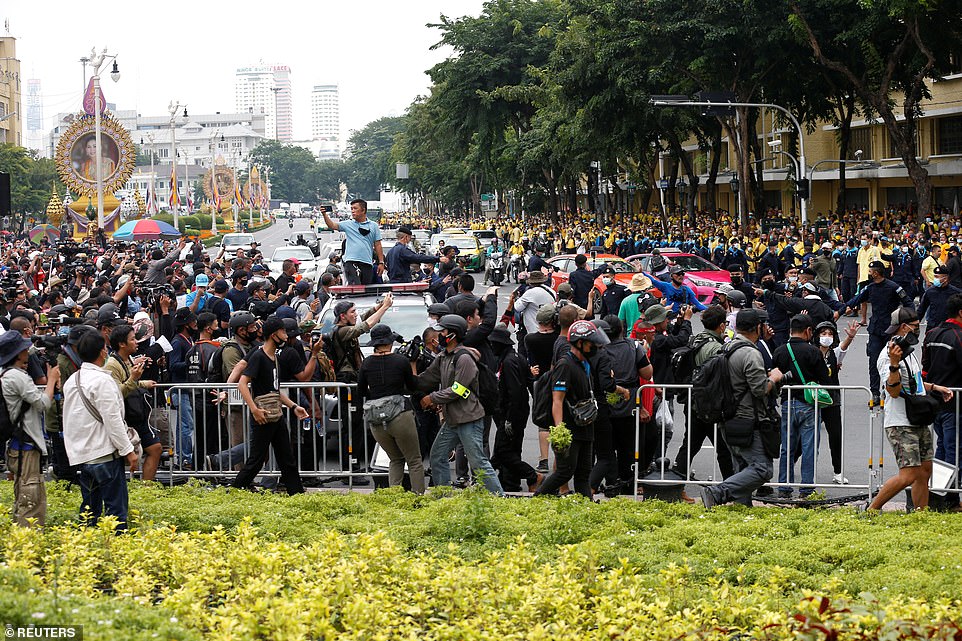 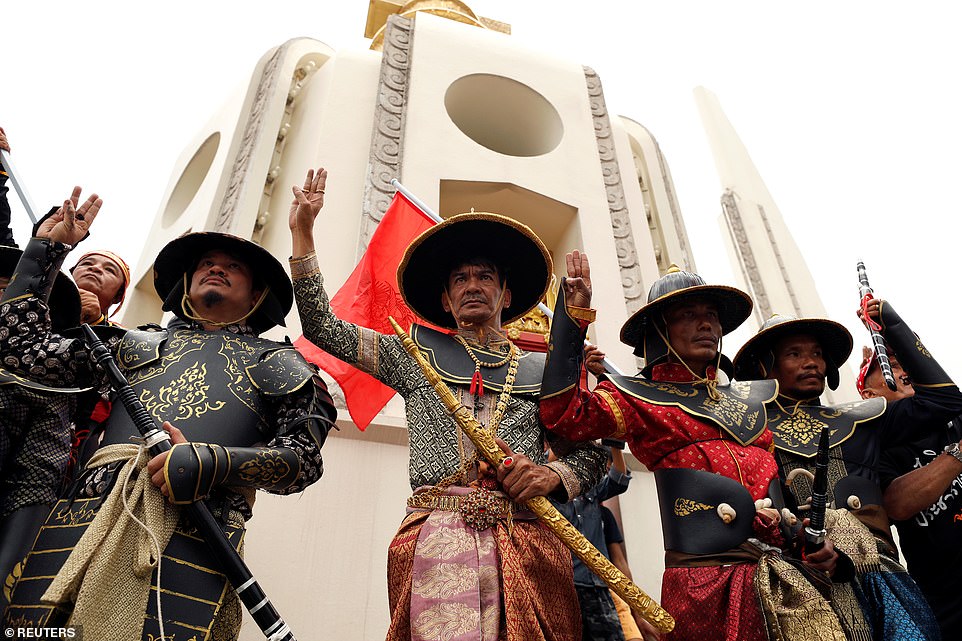 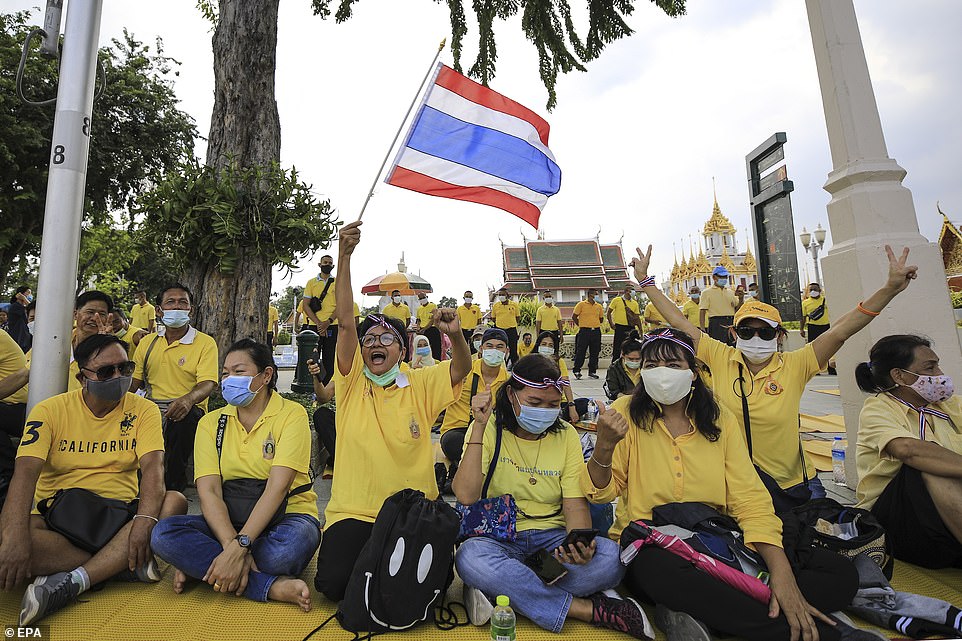 Thai royalists react as they gather for a counter-protest during the anti-government rally, wearing the royal colour yellow

Wednesday’s demonstration is intended to commemorate the 47th anniversary of the October 14, 1973 student uprising against a hated military dictatorship during which 77 people were killed.

The latest protests have become the greatest challenge in years to a ruling establishment dominated by the army and the palace.

While the royal palace has not responded directly to the protesters’ demands, the establishment is thought to have mobilised the ultra-royalist groups to challenge the pro-democracy protesters.

The royalist gathering today was much larger than at previous rallies where they were dwarfed by the tens of thousands of anti-government demonstrators.

The King is described in Thailand’s constitution as ‘enthroned in a position of revered worship’. Thai royalist traditionalists see the monarchy as a sacred institution.

The defamation law is written in Section 112 of the country’s Penal Code and is widely known as the ‘lese majeste’ law, meaning ‘to do wrong to majesty’ in French.

The prison term was raised to 15 years after 1976 student protests at Thammasat University were crushed.

Past convictions have included of a Swiss man jailed for 10 years for defacing pictures of the King, and a French businessman arrested for insulting the monarchy during a Thai Airways flight from London with two Thai royals on board.