Testing travellers when they arrive in Britain and again later on ‘could reduce quarantine time from 14 to 10 days’, scientific advisers say as data reveals the true risk of Covid-19

Testing travellers twice – once when they arrive in the UK and again later on – could reduce the quarantine time from 14 to 10 days, the Government’s scientific advisors have said.

The group’s studies show that when arrivals are ‘double tested’, there’s hardly any difference between quarantining for ten days compared to a fortnight.

The revelation – which emerged last night in documents from the Scientific Advisory Group for Emergencies (SAGE) – will intensify calls among travel bosses for an airport testing regime to replace blanket quarantine measures.

Transport Secretary Grant Shapps claimed on Friday that testing on arrival would only pick up seven per cent of cases.

But industry leaders including Heathrow boss John Holland-Kaye have a suggested a system whereby travellers are tested twice on: once on arrival, and again five to eight days later. If the second test is clear they could, in theory, return to normal life. 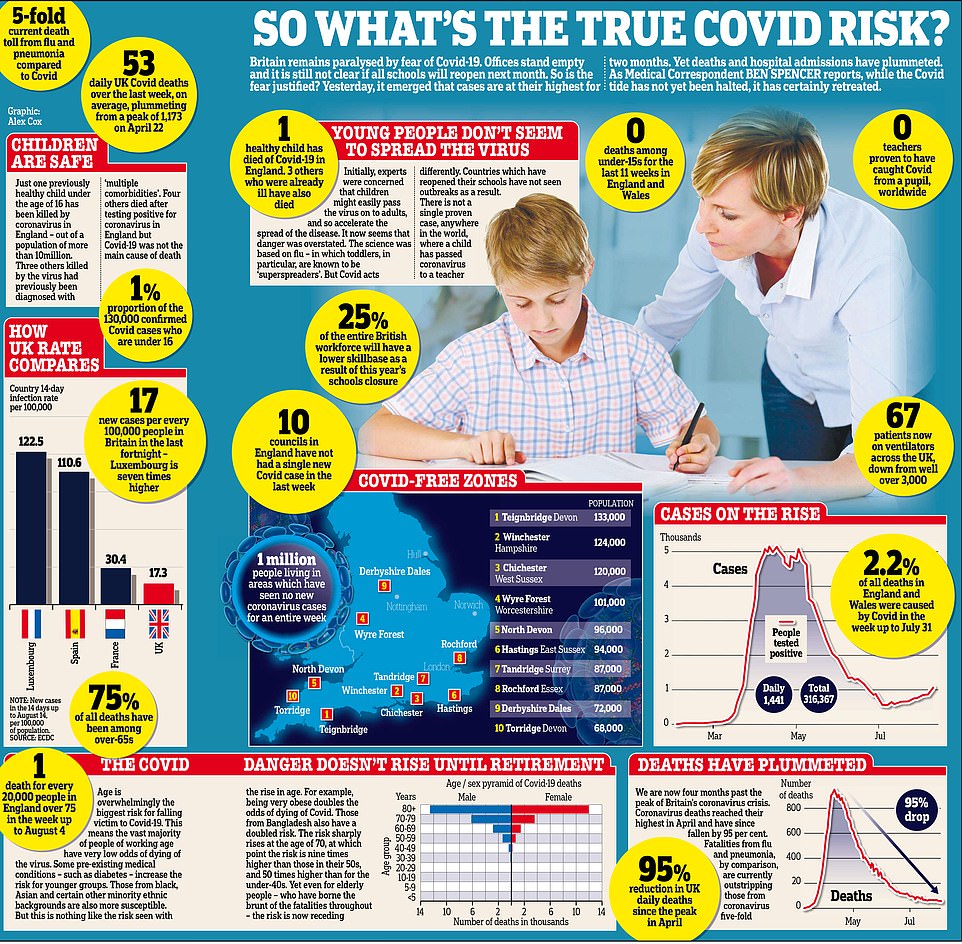 According to the SAGE’s studies, the test success rate for people quarantining for ten days is 96 per cent, which rises to 98 per cent for those isolating for 14 days.

By contrast, the success rate is only 85 per cent after seven days, suggesting the optimal time to test someone is between five and eight days after landing.

This is after they have taken into account the time it takes between testing someone and for their results to come through.

The SAGE documents state: ‘Double testing of travellers significantly reduces the risk of false negatives, and could enable quarantine duration of less than 14 days.

‘The optimal days of testing are between days five and eight post exposure.’ They added that the duration of quarantine in the UK could be shortened even further if initial testing is carried out before travellers board a flight.

However they admit pre-testing of this kind ‘would require international agreements and common standards’.

Senior industry figures are due to launch a major campaign, warning that holidaymakers face a disastrous ‘quarantine roulette’ unless airport testing is adopted.

has been working with aviation services firms Swissport and Collinson to devise a testing regime similar to systems introduced at dozens of airports around the world.

However, it cannot be used on a large scale without endorsement from the Government.

If approved by ministers, the tests would drastically reduce the 14-day quarantine period required on return from popular holiday destinations such as Spain, France and Malta. 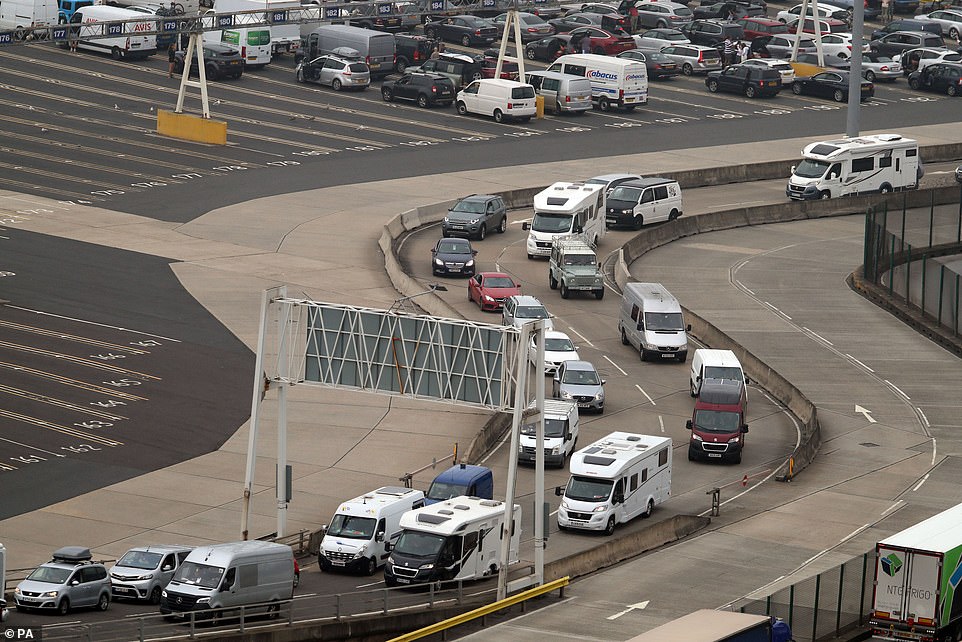 Growing frustration at the Government’s inaction on airport tests has promoted fears for three million travel sector jobs in Britain.

Paul Charles, of the PC Agency travel consultancy said: ‘This in-or-out system of quarantine has to change. It creates confusion and fear, and shuts off economic recovery.

‘It also suggests Britain is closed to the outside world in the run-up to Brexit. The Government needs to invest in regular world-class testing as other countries have done.’

Ministers are yet to be convinced that airport testing is the answer to quarantine woes.

Speaking on Sky News yesterday [FRI], Transport Secretary Grant Shapps said: ‘Testing on return is something that we’ve always said we’d keep a very close eye behind the science on those things.

‘Testing on return isn’t quite as straightforward as it sounds because if you test someone who is asymptomatic, in other words they don’t think they’ve got anything but they may in fact have it on day one on their return, we’d probably only capture a very small percentage, scientists suggest perhaps only seven percent, of actual cases.

I am returning from a quarantine country. What do I need to do?

First, fill in a ‘locator form’ online. This includes your travel history, contact details and the UK address where you will be self-isolating for 14 days. Border Force agents will check you have completed this form before you are allowed through passport control.

YES. Those who do not need to self-isolate after arriving in Britain include airline, ferry and rail staff on cross-Channel services, as well as workers who commute between the UK and a quarantine country more than once a week. Hauliers are exempt, as are seasonal farm workers and anyone with ‘specialist technical skills’ needed for emergency work. Exemptions can also be granted on health grounds.

What if I am driving back via France?

There is no need to self-isolate or even fill out a form – as long as you do not physically set foot in the country, or have anyone join you during the journey.

YES. You can’t nip out to exercise or shop, and are not allowed visitors unless they are providing emergency help or medical care. Food should be ordered online or delivered by friends or family.

Does anyone else in my house have to self-isolate if they didn’t travel?

No. Only those who travelled to a quarantine country have to self-isolate for 14 days. The rest of the household can carry on as normal – although they should try to minimise contact with anyone who is self-isolating.

What happens to those who break the rules?

EVEN failing to fill out a locator form is a criminal offence, which could result in a £100 fine. Those caught breaching quarantine face a £1,000 penalty in England, or even prosecution – which can result in an unlimited fine.

How will this be enforced?

Public health officials will carry out random checks by telephone. If these raise doubts, police will visit the address in question.

Can I claim statutory sick pay if I’m in quarantine?

NoT unless you’re sick. The Government has asked firms to go easy on staff wo get caught out – and says workers can claim Universal Credit if their boss won’t pay them while they self-isolate.

I have a holiday booked to a quarantine country. Should I go anyway?

It’s up to you. The Foreign Office now warns against ‘all but essential’ travel to countries on the list. Most insurance policies will not cover medical expenses in this scenario. In addition, countries are likely to respond with their own measures for arrivals from Britain.

Will I get my money back if I cancel my trip?

IT depends. If your hotel or villa is still open there is no legal right to a refund – but some websites such as Airbnb allow for last-minute cancellations. When it comes to travel, you also have no right to a refund if your airline’s route is still running – although you should get a voucher or free rebooking. These are also being offered to ferry customers due to travel in August. Eurostar says passengers with a booking up to September 7 can get a voucher valid for 12 months.

‘Now, clearly you need a system there is more accurate than that before you can say to people you’ve now been tested and you don’t need to quarantine.’

Families were scrambling to flee France last night amid fears new quarantine rules will cause thousands of children to miss the start of the school year.

Pupils who do not return to the UK by Tuesday night will still be self-isolating at home when the majority of schools go back on September 2.

But with limited capacity on flights, ferries and the Eurotunnel, many will have no choice but to stay in France – or pay high prices for some of the remaining tickets. 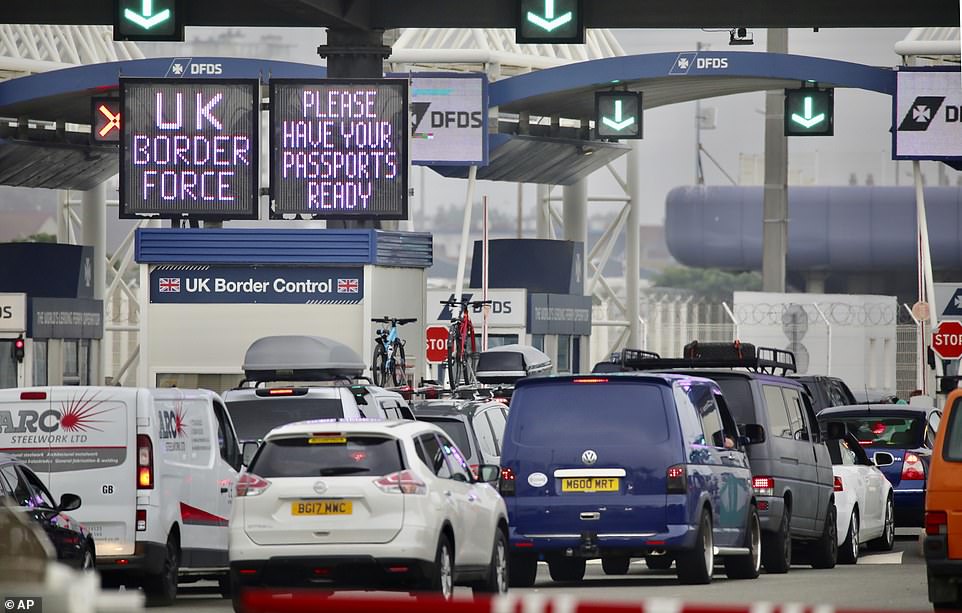 People queue in line to check-in for the cross channel ferry in Calais on Friday as around 160,000 Brits scramble to get back from France before quarantine restrictions come into force at 4am of Saturday 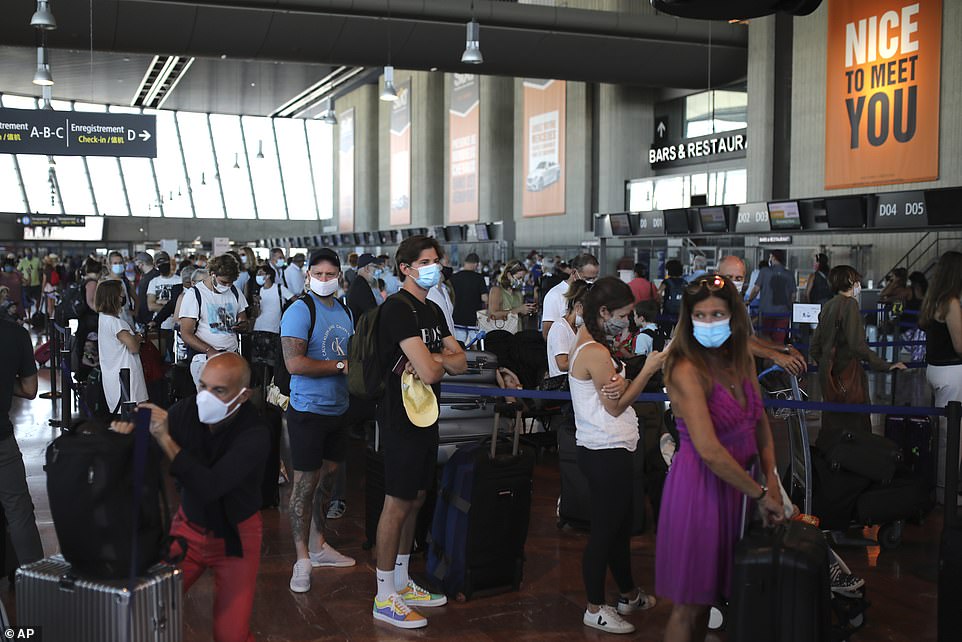 People queue in line to check-in for a British Airways flight to Heathrow Airport on Friday at Nice airport, southern France

In one instance, a British couple who paid £1,000 for business class Eurostar seats and a family who drove for 12 hours are the among thousands forced to flee France and get home before 4am tomorrow when the country is added to the UK quarantine list.

The holidays of up to 500,000 Britons have been ruined by the government’s 11th hour move as they try to avoid having to self-isolate for 14 days once they return to the UK.

Some tourists had less time to avoid quarantine after the Scottish and Welsh governments demanded the rules be introduced a day earlier.

Meanwhile, France is likely to impose to impose tit-for-tat quarantine restrictions from Monday for people arriving from Britain, meaning British travellers will have to self-isolate on arrival there too.

The Office for National Statistics says 20 per cent of adults have abandoned plans for trips abroad. Transport Secretary Grant Shapps said an estimated 160,000 tried to return from France yesterday.

Shapps sparked chaos last night when he announced the dramatic step to add France to the quarantine list, but suggested it would only apply to people who ‘come back from Sunday’.

The Department for Transport then clarified the restrictions would come into force tomorrow instead amid accusations that Nicola Sturgeon demanded quarantine was imposed on France tomorrow to ‘flex her muscles’.

In more bad news for British holidaymakers, Greece could soon be added to the quarantine list, after a spike in its infection rate, with a record 235 cases recorded on August 12. Daily new cases in the country were in the 30s towards the end of July.

Families returning to the UK from France or another blacklisted country after 4am today risk a £1,000 fine and a criminal record if they send their children to school when they are meant to be in a 14-day self-isolation.

Parents will not be fined by head teachers or have their children marked as officially absent if they are observing the quarantine.