Sickening CCTV footage shows the car speeding through a Luton suburb with five people inside – before one leans out and aims the gun at a rival on a bike. 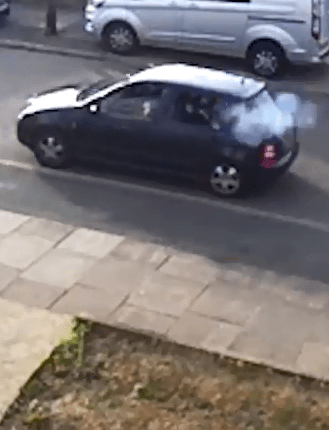 One of the shots – meant for Reanae Charlery, 21 – landed in a family home where kids were present.

Masked thug Faheid Ali, 18, of Linden Road, Luton, was caged for seven years for his part in the shootout.

He was jailed alongside four fellow gang members.

He was spotted in the front seat of a Skoda driven by accomplice Kevin Raveendrakumar, 19, with three unidentified gang members in the back.

Raveendrakumar was handed a three-year tariff, while Charlery was given four years and three months.

"With this incident taking place in broad daylight, these three individuals clearly had no regard for the safety of the public, which is incredibly concerning."

She added: "This incident was seemingly planned, with guns being carried to either be used as intimidation or to cause serious harm."