Hundreds of Golden Dawn members rallied in Athens in advance of a demonstration against negotiations with Macedonia. 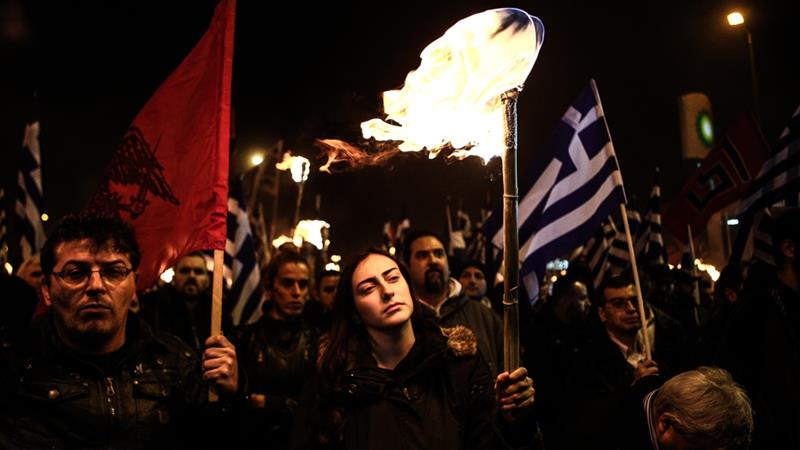 Athens, Greece – Greek flags flew above the crowd of hundreds of far-right demonstrators in the Greek capital as the neo-fascist Golden Dawn party rallied amid fears of violence at an upcoming protest against negotiations between Athens and Skopje over a long-standing name dispute.

Golden Dawn, which has 16 seats in the Hellenic Parliament, called the rally to remember the 1996 Imia crisis, in which three Greek military officers were killed by Turkish forces while patrolling a disputed island.

The crisis brought the two nations to the brink of war, but the main focus of Saturday’s rally appeared to be the ongoing negotiations with Greece’s northern neighbour, the Republic of Macedonia.

On Sunday, hundreds of thousands of people are expected to flood the streets of Athens to demonstrate against those talks.

“Tomorrow there are no parties, there are only Greece and Macedonia,” bellowed Golden Dawn leader Nikolaos Michaloliakos.

“It’s only Greece and Macedonia – to overthrow the anti-Greek government to stop their anti-Greek plans from passing.”

Michaloliakos railed against the government, which is currently led by the left-wing Syriza party, for participating in negotiations. He accused Prime Minister Alexis Tsipras of national betrayal.

“Greece is not only the sellout politicians … there are also people like us,” the party’s leader added, prompting the crowd to yell: “Punks, traitors, politicians.” 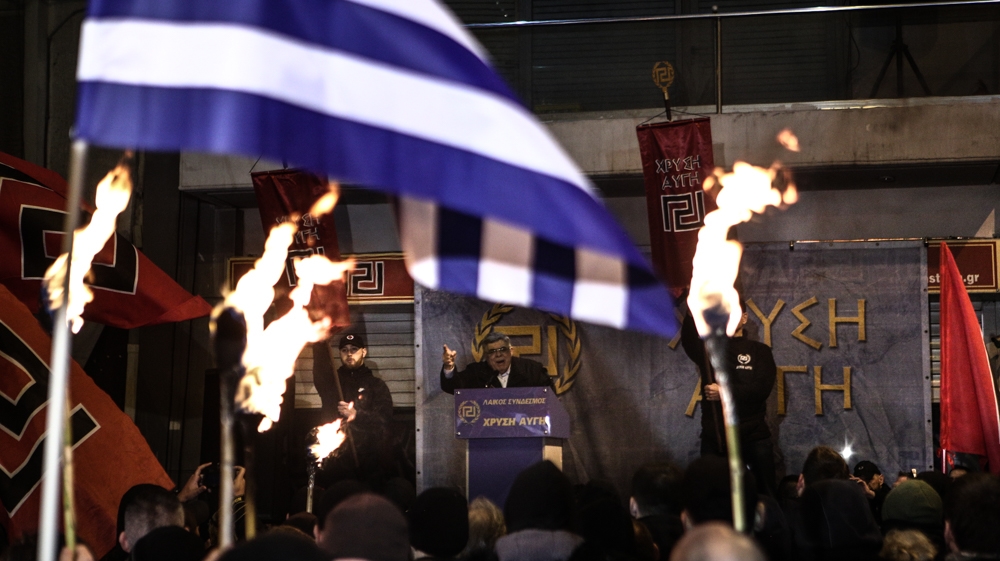 Anger was palpable as the crowd sang the national anthem and chanted a host of slogans. “Anarchists and Bolsheviks, this land doesn’t belong to you,” they sang out in unison.

Ilias Kasidiaris, a Golden Dawn legislator in the Greek parliament who was convicted of hate speech last September, also addressed the demonstrators.

“If we save Macedonia, we will be saved,” Kasidiaris declared as his supporters screamed: “Homeland, pride, Golden Dawn.”

The leadup to Sunday’s protest has sparked concern in the Greek government. Some 1,500 buses are expected to bring demonstrators from places across the country, according to the local daily Ekathimerini.

When Greece’s northern neighbour declared independence in 1991 after breaking away from the war-gripped remains of the Socialist Federal Republic of Yugoslavia, Athens and Skopje were at odds over the use of the term “Macedonia” in its name.

Greece alleges irredentist claims that are indicative of a larger scheme to encroach on territory in the country’s north, while Skopje rejects its neighbours’ claim to hold an exclusive right to the term “Macedonia”.

The country was eventually admitted into the UN under the interim name the of FYROM.

The dispute has caused Skopje’s delays in Macedonia’s accession to the European Union and the North Atlantic Treaty Organisation (NATO).

Nationalists in both countries have rallied around the dispute to broaden their bases.

On January 21, an estimated 300,000 people assembled in the northern city of Thessaloniki to voice their opposition to the ongoing UN-brokered negotiations between Greece and its northern neighbour.

By the end of the day, far-right demonstrators set ablaze a building squatted by anarchists and vandalised a Holocaust monument, leaving pro-Golden Dawn graffiti tagged on it. 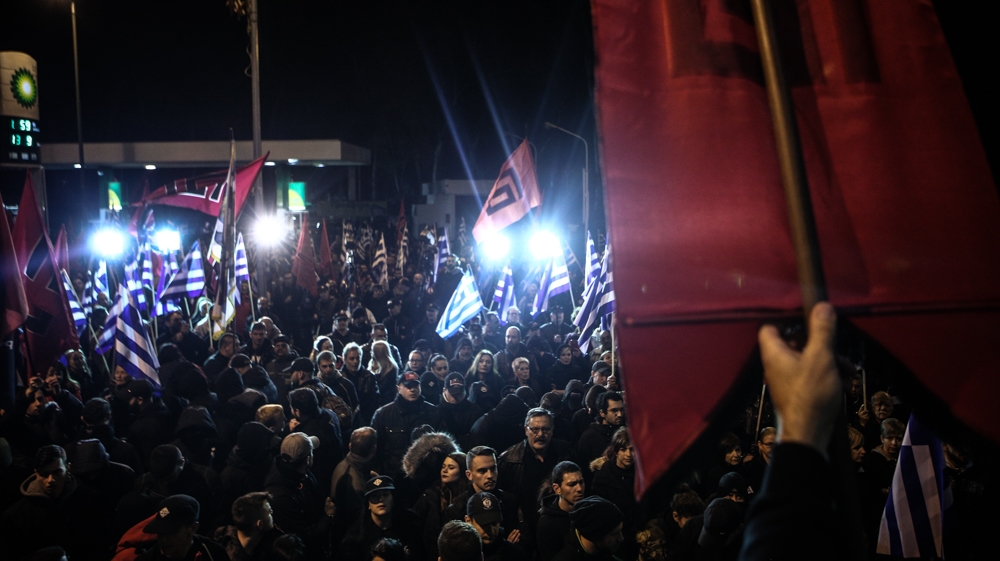 While organisers of Sunday’s rally have denied any affiliation to political parties, critics accuse them of pushing a nativist and far-right agenda.

“If you have the Golden Dawn in your midst, and what you argue is pretty much the same as what they argue, there is a cause for concern,” Seraphim Seferiades, a politics professor at the Athens-based Panteion University, told Al Jazeera.

“There is no way to call a rally against these negotiations and not be on the far right.”

Police were deployed in large numbers throughout Athens on Saturday night, while upwards of 1,500 anti-fascists held a counterdemonstration against the Golden Dawn rally.

Earlier on Saturday, local media outlets reported that paramilitaries groups had formed to participate in Sunday’s demonstration, sparking fears of potential attacks on squats that provide residence to refugees and anarchists.

On Thursday, Foreign Minister Nikos Kotzias received a death threat that said there were “three bullets” reserved for, ostensibly in relation to his lead role in the negotiations between Greece and Macedonia.

In a statement published that same day, Keerfa, an Athens-based anti-fascist group, called for a broader movement against the surge in far-right demonstrations.

“We will continue our campaign against chauvinism and nationalist hysteria to build a mass anti-war movement of united workers against the bosses and NATO in the Balkans,” the statement read.

“The nationalistic hysteria of recent days and the organisation of rallies is a greenhouse for the Golden Dawn neo-Nazis.”

The rising tensions come on the heels of an uptick in anti-immigrant violence that saw the homes of more than 30 Pakistani migrant labourers targeted in attacks between December 25 and January 5, according to Keerfa’s statistics.