Washington: A politically explosive fight over Israel's attempt to block two members of Congress from entering the country – at President Donald Trump's urging – has elevated rifts between it and Democrats who have increasingly started to view the Israeli government and its leader as out of line or, in the eyes of at least two presidential candidates, even racist. 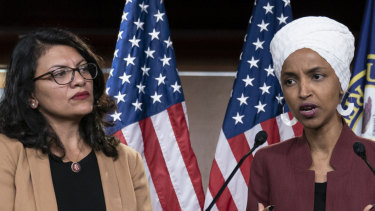 The shift in dialogue has been accelerated by the tight embrace between Trump and Israeli Prime Minister Benjamin Netanyahu, and after a dizzying 48 hours, some Democrats are more openly discussing the unusual step of reconsidering foreign aid to the longtime ally.

The dispute has fractured bipartisan support for Israel and moved debates over it into partisan space more typically home to issues such as abortion, gun control and immigration.

"There is this tectonic shifting of one of the fundamental places of American politics," said Jeremy Ben-Ami, president of J Street, a liberal pro-Israel group. "This has been a plank of the rule book for 60 years, and things are shifting in a really important way."

The situation also has put many Democratic lawmakers in the awkward position of defending colleagues they find politically toxic while rebuking a country they support. It has complicated a months-long effort by congressional Democrats to distance themselves from Representative Ilhan Omar and Rashida Tlaib and repair some of the damage flowing from accusations that they were anti-Israel or, in the case of Omar, had made anti-Semitic remarks.

Trump has worked to portray those members of Congress as the face of the Democratic Party. But his extreme action – urging an ally to bar two members of Congress from entering – has forced many Democrats to defend Omar and Tlaib even while making clear that they do not agree with all of their views.

"The only person who won and got what they wanted was Trump. No one else was happy about it," said Aaron Keyak, a Democratic strategist who works with pro-Israel groups.

"This is exactly what Trump wants," he added. "And in the meantime it is hurting the support for the thing the pro-Israel community most cares about, which is the US-Israeli relationship."

For decades, Israel held a special place in American politics, with almost universal support. That has eroded over the past several years but seemed to disintegrate this week in a way that some fear could do irreparable damage.

Senator Bernie Sanders has been one of the most outspoken recent critics of Israel and has suggested withholding foreign aid. He labelled the country's government as "dare I say, racist," the same description fellow candidate and former Texas congressman Beto O'Rourke used for Netanyahu.

"If Israel doesn't want members of the United States Congress to visit their country . . . maybe they can respectfully decline the billions of dollars that we give to Israel," Sanders said on MSNBC.

The past few days also have jumbled a months-long strategy on the part of House Speaker Nancy Pelosi and her leadership team to try to emphasise that Democrats are friends of Israel, after months of accusations by the president that they are not.

When Omar first sparked an uproar in February for using anti-Semitic tropes to criticise Israel, Trump attempted to suggest all Democrats are "anti-Jewish" and cast Republicans as the only true allies of the Middle Eastern democracy.

House Democratic leaders not only chided Omar for those comments and asked her to apologise, but they worked behind the scenes to assure Jewish voters and Israeli officials that Omar's criticism did not represent the party as a whole.

But now, many hawks on Israel have found themselves in a position of having to release statements criticising a nation they have long defended.

"This matter is a self-inflicted wound by one of America's closest allies, one of our closest friends, and a vibrant democracy," Hoyer said in a Friday statement, his second such remark in about 24 hours. "President Trump's urging of such action and its implementation were – and are – unacceptable."

House Majority Leader Steny Hoyer, who personally pleaded with Netanyahu on Wednesday to allow Omar and Tlaib entry, went on to rebuke Israel for making Tlaib sign a letter limiting her actions in Israel in order to visit her grandmother in the West Bank. Tlaib ultimately declined to go.

Omar on Friday rebutted Netanyahu's claim that the group had not requested to meet with any Israeli officials, and she outlined aspects of the itinerary, which included visits to Palestinian areas.

"As many of my colleagues have stated in the last 24 hours, we give Israel more than $3 billion in aid every year. This is predicated on their being an important ally in the region, and the 'only democracy' in the Middle East," she wrote on Twitter.

"Denying visits to duly elected Members of Congress is not consistent with being either an ally or a democracy. We should be leveraging that aid to stop the settlements and ensure full rights for Palestinians."