Immigration lawyer, 47, tells of ‘extreme harassment’ and stalking campaign by her estranged husband, 55, after she discovered he was already married with five children 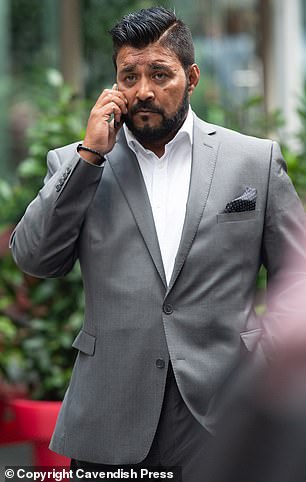 Zafar Rahmen (pictured outside Manchester Magistrates Court), 55, married Shazia Riaz, 47, despite him having another family

A taxi driver subjected his estranged wife to a horrific campaign of harassment after she found out about his other family and broke up with him, a court heard.

Zafar Rahmen, 55, married Shazia Riaz, 47, in an Islamic ceremony even though he was already married to another woman and had five children.

The immigration lawyer found out about his other family, who lived in a house 40 miles away, and decided to split up with him.

But instead of accepting the break-up, Rahmen bombarded her with malicious messages, set up a blog in a bid to smear her and threatened her there were people watching her house ’12 hours a day’, Manchester Magistrates Court heard.

He also turned up uninvited at her law practice in Manchester were he told her colleagues they were still married.

Rahmen, of Tinsley, Sheffield, admitted stalking and criminal damage and was banned from contacting his estranged wife for two years.

He was ordered to complete 250 hours of unpaid work, pay £170 court costs and attend a course on ‘building better relationships’.

The court was told Rahmen made Ms Riaz’s life a ‘living hell’ after she decided to leave him, stalking her and frightening her two children by coming to her house.

The hearing was told the pair had met in May 2018 and Rahmen subsequently proposed to her under Islamic law. 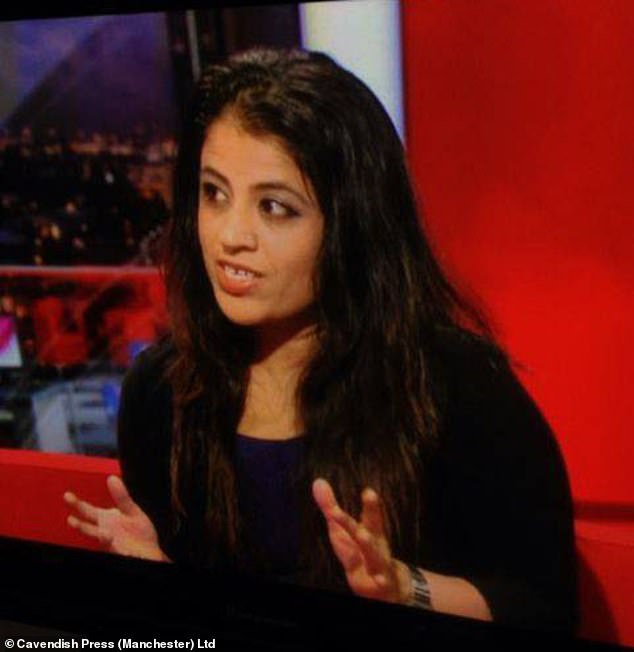 Pictured: Shazia Riaz, 47 was subjected to a harassment campaign by her estranged husband, she told Manchester Magistrates Court yesterday

Prosecutor Joanne Moore said: ‘Due to the fact that she had children she didn’t want to cause disruption and they remained living separately until the children got used to him.

‘However in June 2018 she found out through one of the defendant’s friends he was still married to another woman and had five children and she felt betrayed.

‘They still got married but in June 2019 his first wife became aware of their marriage and Ms Riaz felt she had to get away.

‘She then started to receive unwanted calls, emails and voicemails from the defendant and reported the matter to Cheshire Police.

‘They included a volume of messages and missed calls on the June 21 when the defendant was screaming and shouting at her.

‘She told him quite clearly they weren’t getting back together and she was going to block his number.

‘But on June 26 she received 20 emails from him and information from one of her staff members saying the defendant had been into her office and asked where she was.

‘He called the main reception asking to speak to her secretary and asked that she be told they are still married Islamically.

‘When the victim went away on holiday, on her return there was a birthday card in the gate and she recognised the defendant’s hand writing.

‘He attended the address again after she had just got home from a wedding and had not removed her makeup.

‘He began to question why she had makeup on but she said it was nothing to do with him and told him to go away. However he said: ‘People are watching your gates 12 hours a day – they are after you’.

‘She closed the door and he tried to stop her but he did eventually leave but stood at the gate.

‘Later she received a card, hand-written in which he was telling her he wished bad things on her. She returned that letter, addressed it to his wife and sent it back to her.

‘In July he attended at her address and he asked her to give him five minutes. She told him she was calling the police and told her to stop posting things on Facebook about him and he ran away when she tried to take a photograph of him.

‘In her statement she said ‘I contact the police for help, no one should be subject to this. I shouldn’t have my ex showing up at my home it is meant to be our place of safety’.

‘On July 30 she went to a tea café, and the defendant showed up and asked to speak to her through her friend, she started tor record him at that point he told her friend to stop her recording him and then stamped on her phone.

‘She contacted the police on her friend’s phone. There are numerous emails saying things like ‘I should never have married you you’re a waste of my precious time’ and another talking of a ‘woman of questionable character driven by money to the extent that they will rob their own’.

‘The concerning thing is just the sheer volume of emails, the victim found it particularly distressing there isn’t anywhere she feels particularly safe.

In a statement Ms Riaz, who specialises in helping with asylum claims and refugees, said: ‘Mr Rahmen started a barrage of malicious emails that left me physically and emotionally scarred.

‘He drained me with malicious emails and he built a Facebook blog focused on me as he thought his constant attempts to drain me would forced me to resume a sexual relationship with him which I wasn’t comfortable with.

‘He thought he was above the law and came back more bold each time. I felt I was tense all the time as he focused on me, came to my home and scared my children. I felt threatened and scared by his bully boy behaviour.

‘I have not been able to sleep properly and had to lock my drive gate. He has a view that woman should bow down to him and because I didn’t agree – he felt he had a duty to break me.

‘I feel imprisoned in my own home and I feel I’m the one who had done something wrong. I have become ill – I am still recovering from a major operation and feel I am having a relapse due to the stress.

‘Him going into my work was an invasion of my rights and privacy. He is fixated on me – it is frightening and I don’t know what his next step will be.

‘He spread many lies within my friends and in the community, which had made me feel vulnerable and intimidated.

‘I had to change both my children’s mobile numbers as he started to contact them previously.

‘Nothing will stop him and I have had to move home as I no longer feel safe there. He had made my life into a living hell and I’m unable to function properly because of his extreme harassment and behaviour.’

In mitigation for Rahmen defence lawyer Miss Naila Akhter said: ‘The messages are all about him wanting contact with her.

‘On the last occasion it was very difficult – he cried because of the relationship coming to an end and he was very, very upset.

‘He is somebody who had an arranged marriage and his marriage has never been affectionate.

‘He was hoping he would fall in love with this woman and has struggled with that relationship coming to an end.

‘All he wants is answers about it coming to an end although he has accepted that it’s over.

‘References clearly paint a picture of this man who is involved in the community including a certificate of honour he received for apprehending criminals.

‘He is thoroughly ashamed to appear before the courts and getting himself in the position that he has.

‘When it comes to matters of the heart it is not always so easy to deal with.

‘Over the bank holiday he was sent a screenshot over Instagram from the complainant where she was in Paris being proposed to by her partner. It isn’t helping his emotional wellbeing.’

Sentencing JPs told Rahmen: ‘A probation officer feels this behaviour as pre-emptive, planned and persistent – a pattern of behaviour which led to the victim having to change her way of life.

‘We have noted references to how you feel towards women in particular.’