Washington: US Senator Elizabeth Warren has found a favourite set of adversaries in the 2020 presidential race: America's billionaires. 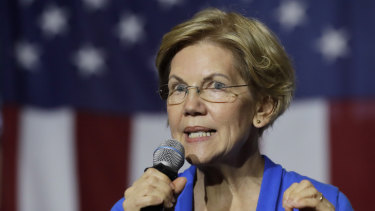 In a new TV ad, Warren singles out a series of billionaires who have criticised her, showing footage of them and repeating her call for a wealth tax on the fortunes of the richest Americans.

The ad, set to air Thursday on CNBC, is the latest volley in the back-and-forth between Warren and the country's billionaires — or at least an outspoken handful of them who have criticised her candidacy publicly. And it comes as Michael Bloomberg, the billionaire and former New York City mayor, is preparing to enter the presidential race.

"It is time for a wealth tax in America," Warren says in the ad, which shows her speaking at a recent town hall. "I've heard that there are some billionaires who don't support this plan."

Then the ad gets specific, identifying four of them and helpfully informing viewers of their estimated net worth. First is the hedge fund manager Leon G. Cooperman, who has publicly sparred with Warren (his net worth: $3.2 billion).

"The vilification of billionaires makes no sense to me," he is shown saying in the ad. "It's bull." Then this flashes onscreen: "Charged with insider trading." (The Securities and Exchange Commission sued Cooperman and his firm, Omega Advisors, in 2016; he and the firm settled in 2017.)

The ad closes with Warren asking the richest Americans to "pitch in two cents," along with a list of social programs that could be funded with the revenue from her proposed wealth tax. Warren wants to impose an annual tax of 2 per cent on net worth above $US50 million, and 6 per cent above $US1 billion.

She would use the revenue from that tax to fund proposals like universal child care, free public college and student debt cancellation, as well as to help pay for "Medicare for all."

In the primary race, Warren generally has avoided taking shots at her Democratic rivals, but she has embraced the fight with her billionaire critics. Last week, her campaign rolled out an online calculator showing what a billionaire would owe under her wealth tax, depending on the size of their fortune.

The calculator includes a link to show what Cooperman, specifically, would owe under the wealth tax.

Cooperman fired back Wednesday after Warren's new ad was reported by CNBC, calling her "disgraceful" in an interview with the cable network.

"In my opinion, she represents the worst in politicians as she's trying to demonise wealthy people, because there are more poor people than wealthy people," Cooperman said.