NSW residents will be able to travel to Tasmania without facing quarantine from next Friday, after Tasmania deemed the state to be low risk.

Tasmanian Premier Peter Gutwein announced on Tuesday that NSW would be re-classified as a low-risk area from November 6. 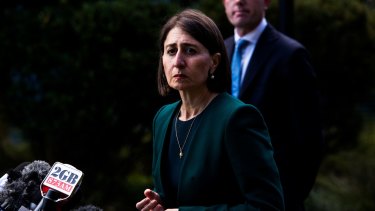 Ms Berejiklian said she would only reopen the border with Victoria once she has seen the impact of restrictions easing in the southern state.

Victoria recorded its second day in a row of zero cases on Tuesday, but she said "the real test" would come when people started moving around after restrictions ease from midnight.

"We want to open that border as soon as we can. But what is really important to us is to see what happens once Victoria eases restrictions down there," Ms Berejiklian said.

"It’s easy not to spread the virus when everyone is confined to their home or has limited mobility. But once you ease restrictions and people start moving around again, that’s the real test.

"I think the residents of NSW would expect me and my government to be responsible in how we deal with that."

Ms Berejiklian was on the Mid-North Coast on Tuesday visiting bushfire affected communities. "I think the residents of NSW would expect me and my government to … [open our borders] as soon as we can," she said. "But we need to see what impact the easing of restrictions in Melbourne and Victoria has.

Victorian Premier Daniel Andrews said, while restrictions would ease from midnight, it was vital that the state remained vigilant and continued to get tested.

"Not every day will be zero. There will be cases, there will be outbreaks," he said. "We're well placed to manage those. But the management of those is a partnership."

He said the government was working towards the roll-out of rapid testing, but could not say when it would become widely available.

"It is not quite as accurate as the longer-form testing, if you like. But the turnarounds are really, really quick, and it can help just in getting … more of a picture than no testing, in given settings," he said.