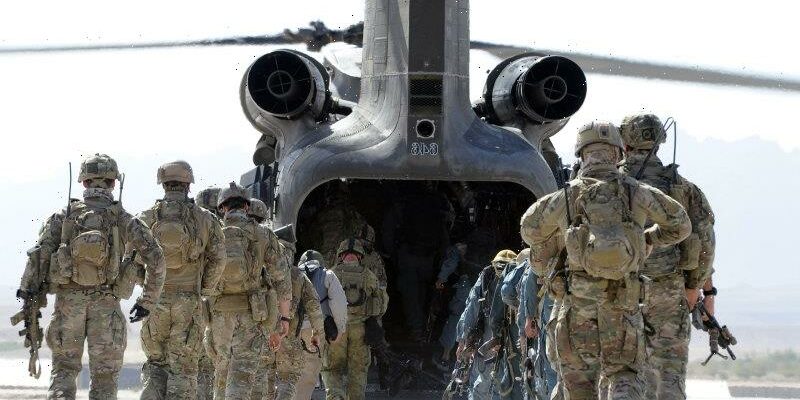 The special agency launched by Prime Minister Scott Morrison to investigate alleged war crimes committed by Australian soldiers against Afghan civilians and prisoners has suffered its first major setback with the fall of Kabul.

The Office of the Special Investigator is a $75 million agency created by Mr Morrison in response to the damning findings of the Brereton war crimes inquiry last November. Justice Paul Brereton uncovered credible allegations that special forces soldiers committed 39 murders in Afghanistan and covered them up by maintaining a mafia-like code of silence. 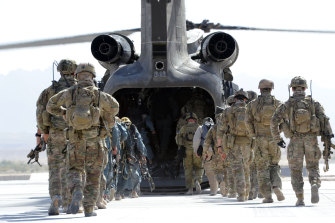 A small number of Australian Special Forces soldiers are accused of war crimes in Afghanistan.

But the collapse of the Afghan government means the elite team of state and federal police homicide detectives working with the special investigator will now struggle to interview Afghan witnesses and gather evidence held in the country.

A former senior international war crimes prosecutor said the war crimes investigation likely to be least impacted is that involving Victoria Cross recipient Ben Roberts-Smith, whose defamation case recently heard the evidence of three Afghan witnesses who may never get another chance to testify in an Australian court.

The Taliban takeover and the collapse of the US and Australia-backed Afghan government has raised potentially insurmountable barriers for OSI and AFP investigators probing many of the Brereton inquiry allegations. Even if it is deemed safe to travel to the wartorn nation, any co-operation with Taliban officials to gain access to evidence or witnesses could compromise the evidence gathered given the Taliban’s hostility to the west.

The inability to access Afghanistan is likely to impact on the case of Haji Sardar, an Afghan civilian allegedly murder by an SAS soldier on March 14, 2012, in the southern Afghanistan village of Sarkum. 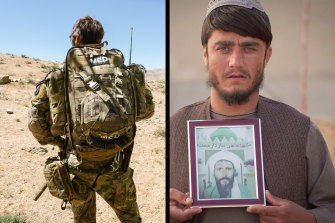 Dusty Miller and Hazratullah Sardar, the son of Haji Sardar who is alleged to have been killed by an Australian soldier.

A former SAS medic, Dusty Miller, previously revealed that just prior to his death, Mr Sardar, a father of seven, was in his care suffering a non-fatal gunshot wound. He was shot through the thigh by the SAS when they first landed in his village.

Mr Miller, a soldier who was deployed with the elite SAS to Afghanistan in February 2012, claims the injured Mr Sardar was taken from his care by a senior SAS soldier and murdered.

The Age and The Sydney Morning Herald have chosen for legal reasons not to name the soldier, who has since left the military. Injuries on Mr Sardar’s body suggest he was stomped to death. The injuries were photographed by Mr Sardar’s family, who have given extensive interviews to this masthead. Mr Miller did not witness Mr Sardar’s death.

But the Brereton inquiry had gathered his testimony about the minutes preceding the killing, and records of families’ and villagers’ testimony, in recommending the Office of the Special Investigator commence a war crimes inquiry. 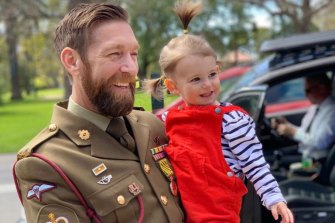 Dusty Miller and his daughter, Eliza. Dusty has had trouble shaking the memory of events in Afghanistan.Credit: Supplied

The former Deputy Chief Prosecutor at the International Criminal Tribunal for the former Yugoslavia, Graham Blewitt, said it’s almost certain investigators would have sought their own first-hand testimony from Afghans about the Sardar case had Kabul not fallen.

The special investigator may now have to rely on earlier-made statements by Afghan witnesses, including those given to the Brereton inquiry or media outlets.

But Mr Blewitt said in other alleged murder cases in which Afghan witnesses have given no prior statements, the OSI will be forced to rely solely on Australian special forces witnesses and documentary evidence of killings captured in defence mission reports.

“It’s important to get access to crime scenes and local witness statements because this sort of evidence can give life to a case put before a jury,” Mr Blewitt said. “Getting to the scene of an alleged war crime also opens up fresh leads as new witnesses learn that investigators are in town.”

Mr Blewitt said the war crimes investigation likely to be least impacted by the Taliban takeover is the AFP’s probe into Mr Roberts-Smith and allegations he kicked civilian Ali Jan off a small cliff in September 2012. The Victoria Cross recipient’s decision to launch defamation proceedings against this masthead in 2018 led to three Afghan witnesses testifying and being cross-examined in the Federal Court in late July.

The judge in the defamation case, Anthony Besanko, had days earlier agreed the witnesses should be permitted to testify via video link from the Kabul offices of an American lawyer because it was feared Kabul might fall to the Taliban. Kabul was captured 14 days after they finished their testimony.

That video-recorded testimony could possibly be relied on if prosecutors recommend charges against Mr Roberts-Smith, Mr Blewitt said.

“It’s very likely to be used in a criminal trial if Mr Roberts-Smith is the defendant because his lawyers have had the full opportunity to cross-examine the witnesses.”

Mr Blewitt, who also served as a NSW magistrate, described the defamation proceedings as “a stroke of luck for the OSI … it is a gold mine”.

In May, when it was reported that Australia was pulling its diplomats from Afghanistan and instead relying on the continuing US and British diplomatic presence, OSI director-general Chris Moraitis told a Senate estimates hearing that closing the embassy could make it more difficult to prepare briefs of evidence into the alleged unlawful killing of 39 Afghan prisoners and civilians by Special Forces soldiers between 2005 and 2016.

“Clearly having access to Afghanistan and witnesses in Afghanistan is important, therefore the closure of an embassy would not be ideal. However, we have contingencies to deal with and we look forward to what comes in the future,” Mr Moraitis said at the time.

The Office of the Special Investigator is expected to face intense legal, political and media scrutiny as its teams work with the AFP to bring accused former SAS and Commandos operatives to trial. The AFP has never conducted a successful war crimes investigation and its ability to investigate the Brereton inquiry allegations looms as a test for AFP Commissioner Reece Kershaw.

In July, this masthead reported the most serious allegations to be probed by the OSI involve a series of alleged murders by special forces soldiers which the heavily redacted Brereton inquiry dubbed “the most disgraceful episode in Australia’s military history”.