Washington: George Santos shared a falsehood on his first day on Capitol Hill: that he had been sworn in as a member of the House of Representatives.

While the statement on his official website drew instant criticism because the New York Republican has been accused of fabricating key details of his biography, he wasn’t the only one to send out a false announcement.

The press release on Santos’s House page on Tuesday, which said he “was sworn in as a Member of the United States House of Representatives by the Speaker of the House on January 3rd, 2023,” appears to have been generic and possibly automated. 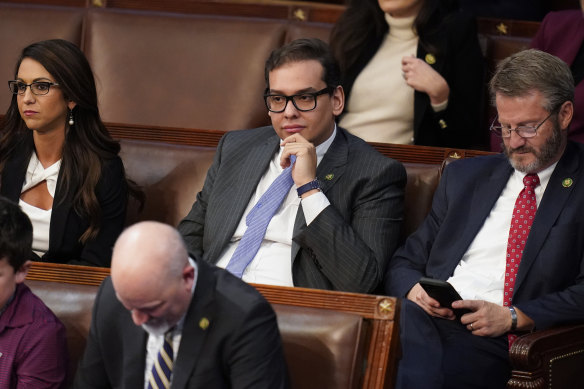 Republican Representative George Santos is in the House, even if the US House isn’t functioning. Credit:AP

Identical statements were posted on the websites of other incoming freshman lawmakers, including for Robert Garcia, a California Democrat; Michael Lawler, a New York Republican; and Yadira Caraveo, a Colorado Democrat.

The mistake shows the potential pitfalls of scheduling press releases on the assumption Washington politics will go smoothly.

No elected member of the House was sworn in on Tuesday, including Representative Kevin McCarthy as House Republicans, who secured the majority in November, failed to elect a Speaker after McCarthy’s bid was thwarted.

Incoming members cannot be sworn in until a Speaker is chosen. The House is scheduled to convene again at 8pm on Wednesday Washington-time, and a fourth round of voting is expected.

The Office of the Chief Administrative Officer for the House of Representatives did not immediately respond to a request for comment overnight on Wednesday about why the messages may have posted to the lawmakers’ websites.

Santos’s statement appears to have been taken down online, while some others remain public.

Nonetheless, political pundits and keen-eyed Twitter users were swift to spotlight Santos, 34, an accused serial fabulist whose actions are being examined by the attorney general of New York and the district attorneys of Nassau County and Queens. Authorities in Brazil are also seeking to reinstate a 15-year-old fraud charge against him.

“Best case, it was a scheduled post and his people forgot to cancel it. Worst case, well, we all know,” another wrote.

“Sworn-ish” was another retort, in apparent reference to Santos telling the New York Post he was “Jew-ish,” after claims he had embellished his ancestry.

Santos was elected in November to represent the 3rd District of New York, flipping a crucial seat for the Republican Party. A firestorm ensued last month after the New York Times and others outlined apparent fabrications in Santos’s work and educational background and personal history.

“If I disappointed anyone by my résumé embellishment, I’m sorry,” Santos, who has denied any criminal wrongdoing in the United States or elsewhere, told WABC radio in New York last week, adding: “I will be sworn in. I will take office.”

Democrats have demanded his resignation; Republican congressional leaders, including McCarthy, have been largely silent despite calls for him not to be seated.

On his first day Tuesday, wearing a backpack and walking the halls, Santos avoided questions from swarming reporters. Inside the House chamber, he sat mostly alone on the Republican side during votes, where he supported McCarthy for Speaker.

McCarthy has failed in seven rounds of balloting to earn the 218 votes needed to take the Speaker’s gavel. His inability to clinch the job in one vote – something that hasn’t happened since 1923 – has highlighted party divides, with hard-right GOP holdouts unmoved by his concessions during his leadership bid.

Without a Speaker elected, the House cannot swear in all members to vote for a rules package, and further delays will also affect committee work and prevent new members like Santos from accessing basic office functions like email.