Victoria’s Chief Health Officer has told a parliamentary inquiry probing the state’s contact-tracing capabilities that the system began to buckle when new coronavirus cases hit 200 a day or more.

"When you get to hundreds of cases, at that kind of level of 200 or more cases per day, it starts to really challenge your ability to get to all of that timely information for close contrasts within that critical time period," Professor Brett Sutton told the inquiry. 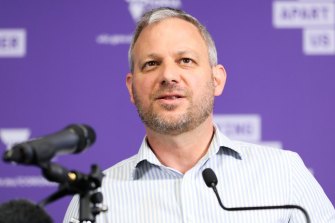 "When you get to very, very high numbers it does degrade your ability to get on top of it."

Professor Sutton also told the inquiry, which is probing the state’s contract tracing and the testing regime in Victoria and assessing how the health department responded to the pandemic, that the state experienced a rapid surge in community transmission in late May.

He attributed this spike largely to positive cases linked to the ill-fated hotel quarantine program.

"The driving force there was what looks like epidemiologically … a super-spreader event that has popped up in a large number of households over very broad geographical areas," he said.

The inquiry earlier heard that about third of those infected were responsible for driving most of the spread of the virus.

"So even with the best contact tracing in the world, we were faced with individuals who had up to 20 close contacts each, either in the workplace or household or both," Professor Sutton said.

The Age has previously revealed that long delays hindered efforts to get on top of community transmission, with some Victorians waiting nearly two weeks for confirmation they could have been exposed to COVID-19.

"It doesn't matter how good your system is and your interviewers are, unless you have the trust and engagement of the community … the processes will not work," he told the inquiry.

The inquiry, headed by Reason Party MP Fiona Patten, is investigating whether the contact-tracing system as it stands can handle future coronavirus outbreaks.

The program, which has been under immense scrutiny during a recent independent inquiry, is scheduled to resume on December 7 when international arrivals can again fly into Melbourne.

Mr Andrews was responding to a question about the calls for hotel quarantine facilities to be moved outside major capital cities to lessen the risk of COVID-19 leaking into the wider population.

The suggestion came after South Australia's outbreak which – like Victoria's second wave – stemmed from hotel quarantine.

"I think living on site's not just a function of being out in the suburbs or in regional Victoria. I think you might find that's a feature of the reset system," he told reporters.

"Not necessarily every member of staff, but some. Particularly those that are… the highest risk group if you like, those who have got the most frequent contact.

The Premier described those staff who would live on site as "living in a bubble".

"We're working through all of those issues," he said. "We're well advanced, we're not quite ready to make a full announcement yet about what that will look like but we've got a modest start."

The scheme will restart in a fortnight, and will be able to accommodate 160 returning Australians a day.

Mr Andrews had already said that staff in the new version of the hotel quarantine would be solely contracted to their jobs in the program and would be pre-emptively contact traced.

Victoria on Monday notched up two dozen "doughnut days" of no new cases and no deaths. There were more than 7200 test results received on Sunday.

There is still one active case in Victoria. Health Minister Martin Foley has said that case is an immunocompromised person who remains hospitalised with a long-term case of COVID-19.