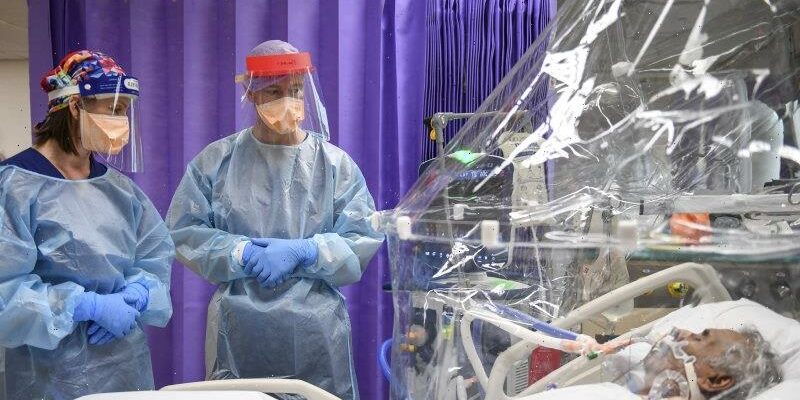 Urgent category-one surgery is having to be rescheduled at some Victorian hospitals amid crippling staff shortages, as doctors warn of a rise in people arriving at hospital with life-threatening complications after coronavirus and flu infections. 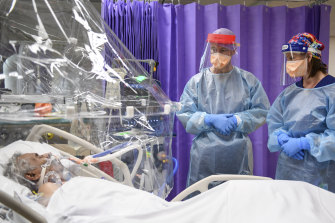 Almost 900 Victorians are in hospital with COVID-19.Credit:Penny Stephens

Figures obtained by The Age from the Critical Health Resource Information System – a database used to monitor ICU capacity nationally – show there were 122 intensive care doctors and nurses absent on Thursday, due to COVID-19 alone.

This compares with 400 at the height of the first Omicron wave. However, doctors say shortages have worsened, with hundreds of staff unwell from winter respiratory illness not included in the figures.

Sick leave rates are at the highest level reported to the Victorian Health Department in the last four years: about 5.5 per cent, compared to the usual 4.4 per cent.

Victorian chair of the Royal Australasian College of Surgeons, neurosurgeon Patrick Lo, said hospitals across the state were being forced to make difficult decisions to defer surgery, including even urgent category-one procedures.

“This winter is probably one of the worst we’ve ever had,” Lo said. “It’s stretching our resources until there’s nothing left.”

The Age has been told of cases where cardiac procedures, cancer and neurological surgery, had been deferred at the last minute this week due to shortages of staff or intensive care beds.

Lo said any deferred urgent surgery was being rescheduled as soon as possible and was still being undertaken within the recommended 30-day timeframe.

“Often it might be a difference of a few days, but we are working very, very hard in the background,” Lo said. “It is challenging, but hospitals are managing this extremely well. The sickest patients will always get priority.”

Emergency surgery continues at every major hospital. But Lo said surgical teams remained “at the behest of what was coming through the front door of the hospitals.”

“If there are many people coming in and filling up beds with COVID, we’ve just got no capacity to look after the patient booked in for surgery and it leads to an elective surgery problem,” he said.

“Across the state, operating may be impacted on the day in question because crucial staff members are unfortunately sick with respiratory illnesses or other illnesses,” she said, adding category-two and three procedures were being most severely affected.

“This is the worst that we’ve seen in a long time,” Duke said. “It’s a combination of stress, burnout from being overworked, as well as COVID infections, but it is really the other flu-type viruses that are around that are really knocking people off more than COVID now.”

Duke, who works at a large Melbourne hospital, said intensive care units across the state were also admitting rising numbers of people who had become critically ill after experiencing life-threatening complications or secondary infections following bouts of serious respiratory viruses, including coronavirus or influenza.

“The really fascinating thing we’re seeing in ICU this time around is that we are treating an increasing number of people who had a COVID infection and shortly afterwards they are getting another secondary infection or a complication,” he said.

“We’re seeing a lot of serious bacterial infections, pneumonia, septicemia, which is blood poisoning, pulmonary embolisms and patients whose diabetes has gone haywire and they end up getting really sick.”

Duke said all the conditions were recognised complications that could occur after any serious viral illnesses, but there had been a sharp rise this winter, a trend he attributed partly to the thousands of coronavirus infections circulating and an earlier flu season. 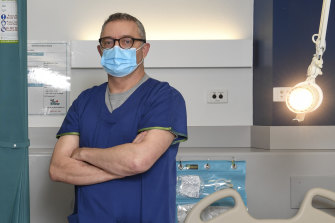 David Pilcher says there is a backlog of patients waiting to be transferred from ICU to general wards.Credit:Penny Stephens

But he was also concerned people were ending up sicker due to delaying getting care and urged anyone who felt unwell in the weeks following COVID or the flu not to delay medical treatment.

Those ending up in intensive care with severe complications were disproportionately not up to date with their vaccinations.

“We consistently see it’s the people who are not vaccinated that get the bad COVID and often get the serious complications,” he said.

Intensive care specialist David Pilcher said there were delays in admitting people to ICU due to staff shortages, but there were also some ICU patients – experts say it could be as high as one in five – who were well enough to be transferred to general wards, but couldn’t be because those beds were full of COVID-19 patients.

He said the phenomenon, known as ‘exit block’, was creating severe backlogs in the system. Nurses and doctors were being asked to work extra shifts or stand in at other hospitals to fill vacancies in intensive care, Pilcher said.

“It’s progressively more difficult to move patients out of the ICU who are ready to be discharged from the intensive care to the general ward,” he said.

The Australian College of Critical Care Nurses’ Victorian representative, and intensive care unit nurse manager, Michelle Topple, said that on bad days, ICUs at major Melbourne hospitals could have up to half of the rostered staff absent due to illness. Absenteeism of this scale was starting to happen more frequently, she said.

“This is why we’re focused on carrying out recruitment and providing further training and support to our existing workforce,” he said.