Food for the soul: A colourful vegetable stall, fishermen casting their nets and a beekeeper carefully working with a hive feature among beautiful winning images in food photography awards

Thousands of stunning pictures of food from over 70 countries around the world were submitted for an international photography competition.

Scenes depicted by the entrants included Rohingya children queuing for food, a beekeeper in China carefully removing a honeycomb from a hive and fishermen casting their nets for the harvest in Myanmar.

The judges of the annual Pink Lady Food Photographer of the Year awards whittled down the almost 9,000 images to come up with the overall winner.

A heart-wrenching picture of refugee Rohingya children in Bangladesh waiting to collect food was handed the crown of the prestigious award.

Divided between a dozen categories, the overall winning shot – titled After Exodus by Bangladeshi photographer KM Asad – was taken in the vast Rohingya refugee camp, which is home to more than one million people in Cox’s Bazaar, Bangladesh.

The image showing 13 youngsters cramped together in a line, holding metal bowls while waiting for their next meal, also won the Politics of Food category. 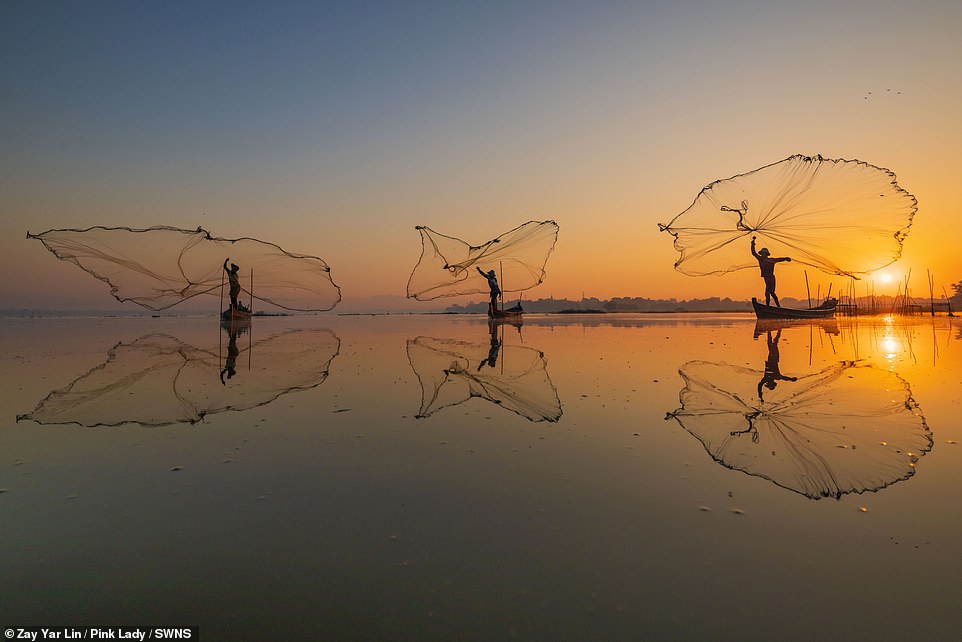 This image won third place in the competition, winning the Bringing Home the Harvest category. It shows fishermen casting their nets on a lake for their morning catch in Myanmar 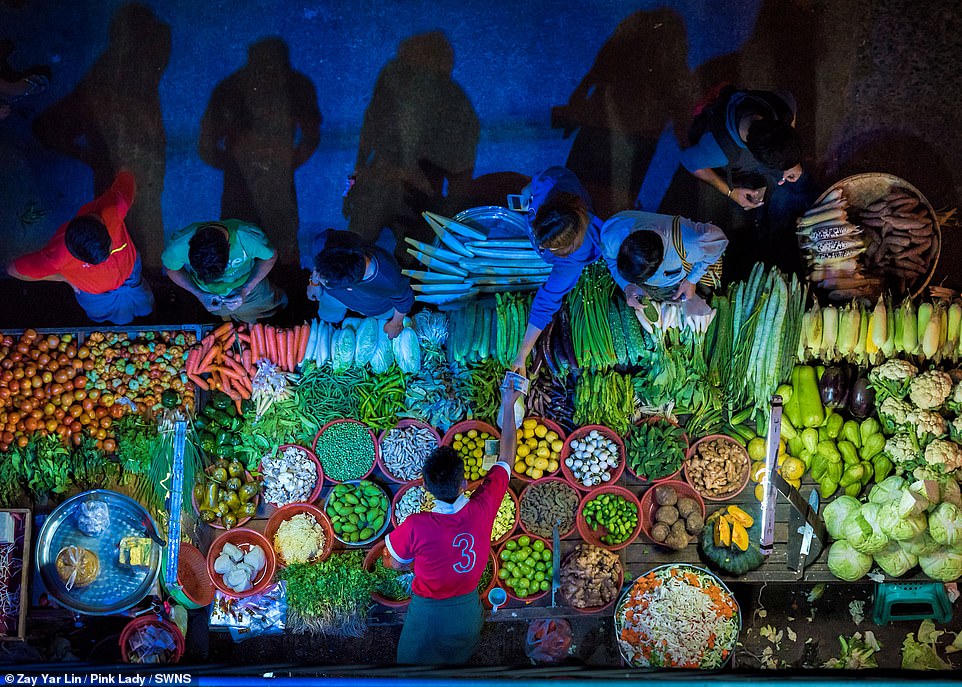 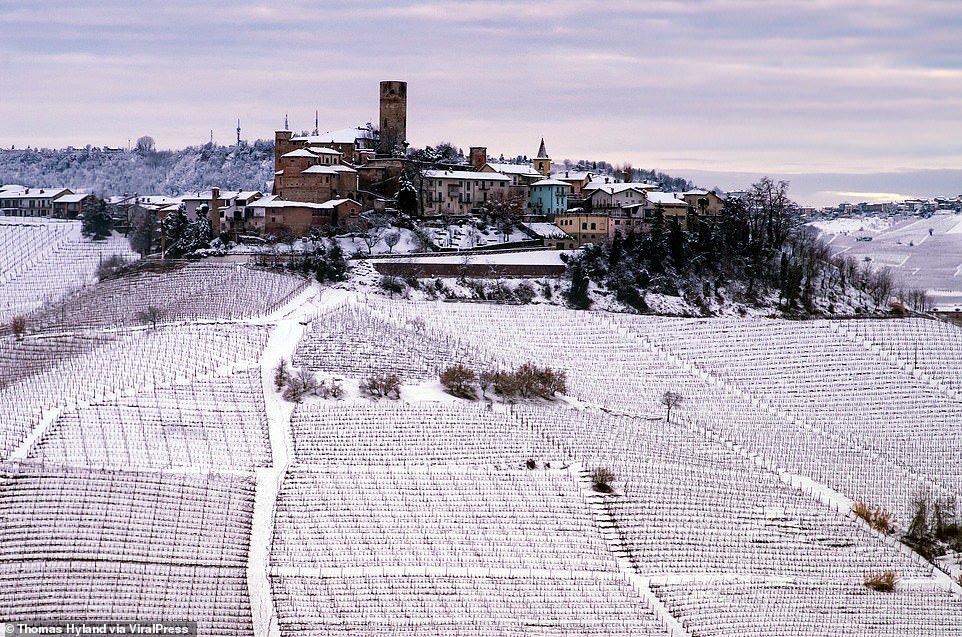 Snow-covered vineyards at Castiglione Falletto in the Langhe district of Piedmont, Italy, that was entered into the Errazuriz Wine Photographer of the Year 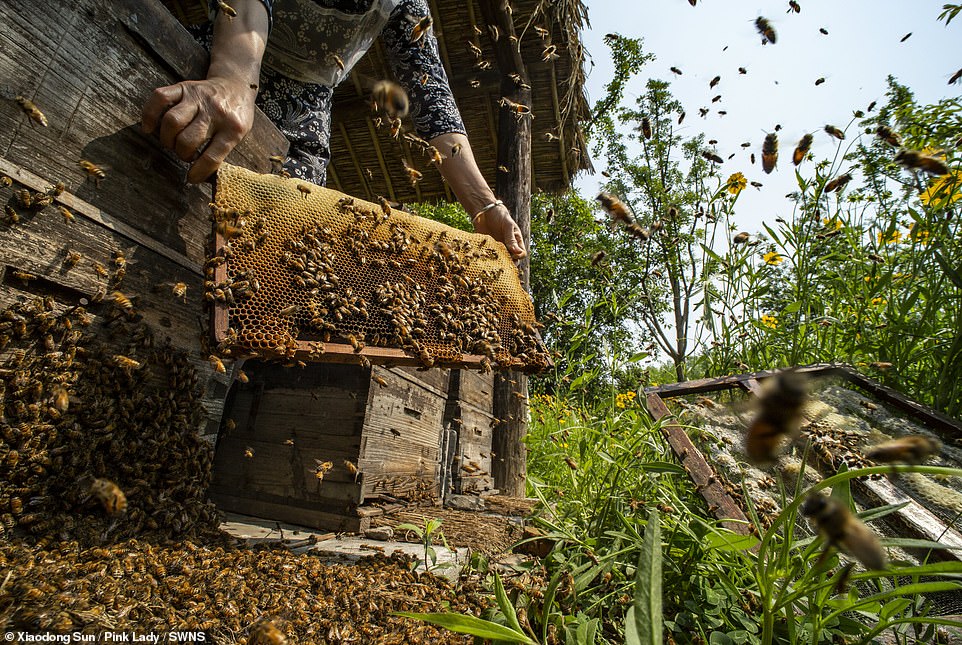 Second in the overall winner category was a shot of a bee keeper carefully removing the bees from their hives in Suzhou, Jiangsu Province, China 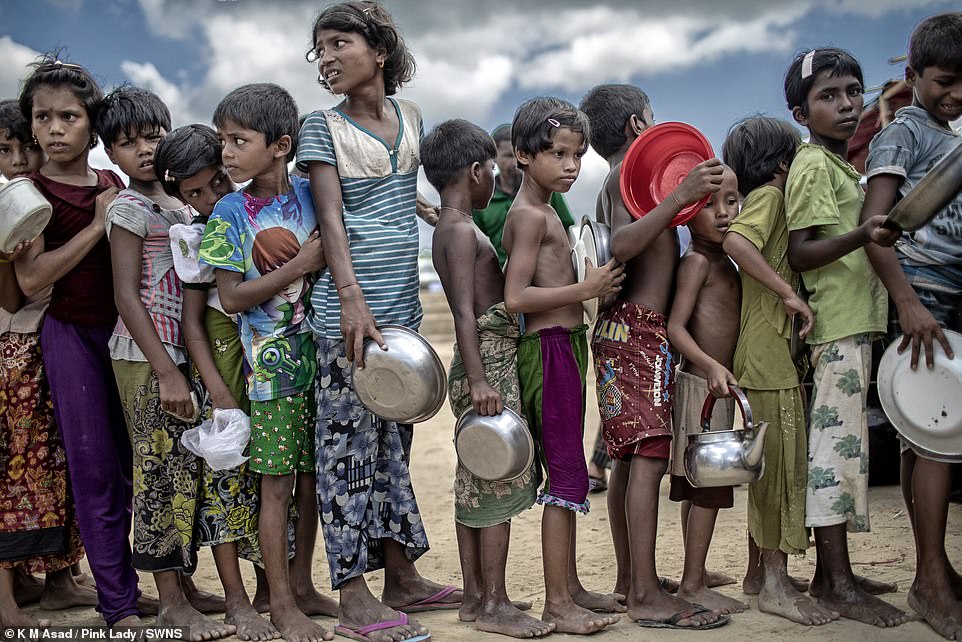 Food Photographer of the Year 2020, overall winner shows Rohingya children queuing for food at a refugee camp in Ukhiya, Cox’s Bazar, Bangladesh. Founder and Director of the Awards Caroline Kenyon said of the winning shot: ‘The world is in the grip of COVID-19 and normal life, whatever that may be, has stopped for all of us. This moving image really speaks to our times. These Rohingya refugee children remind us of the fragility of life, that our need for food for survival connects us all around the world. We are all the same’

Fishermen casting their nets on a lake for their morning catch in Myanmar by Zay Yar Lin bagged the Bringing Home the Harvest category, with a honeycomb surrounded by bees in China declared the winner for Xiaodong Sun in the Food in the Field.

Due to coronavirus, the awards ceremony was streamed live online and hosted by former Blur guitarist-turned artisan cheese-maker Alex James. 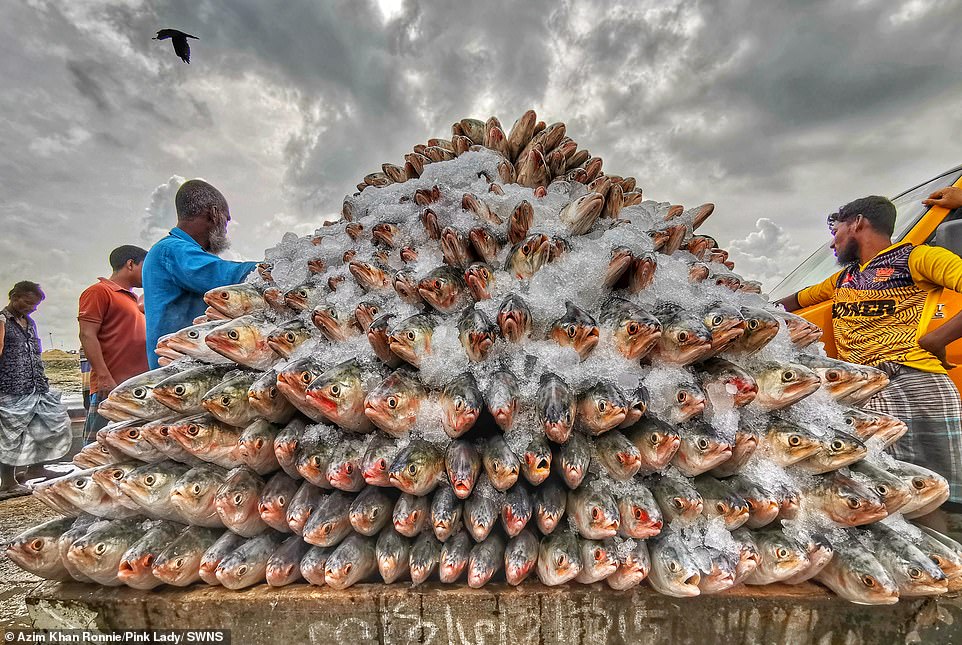 This rough and ready image was the winner of the On the Phone category by Azim Khan Ronnie from Bangladesh, with this amazing shot of a pyramid of frozen piled up Hilsa fish, a type of herring, at Chittagong fish market 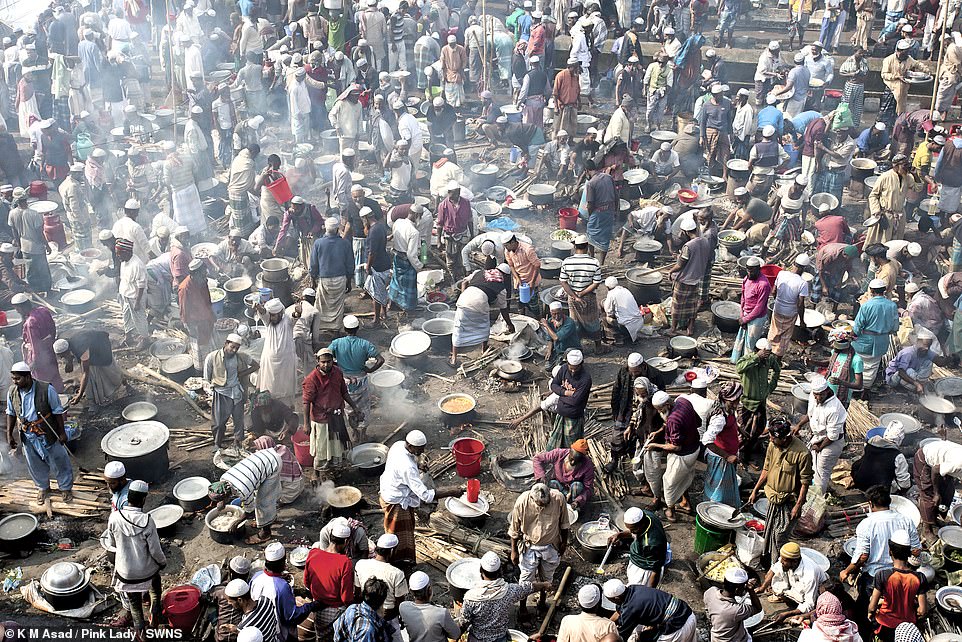 Muslims preparing a feast before the Friday prayer in a field close to the congregation ground during the first day of the three-day long Muslim Congregation, Biswa Ijtema, at Tongi near Dhaka, Bangladesh. This image was also taken by KM Asad 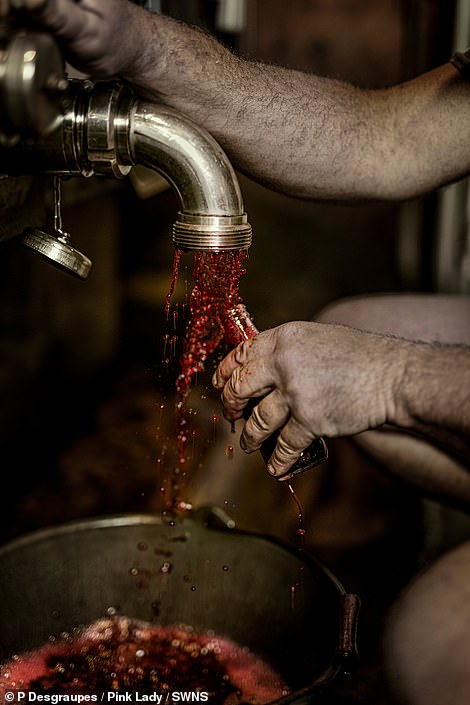 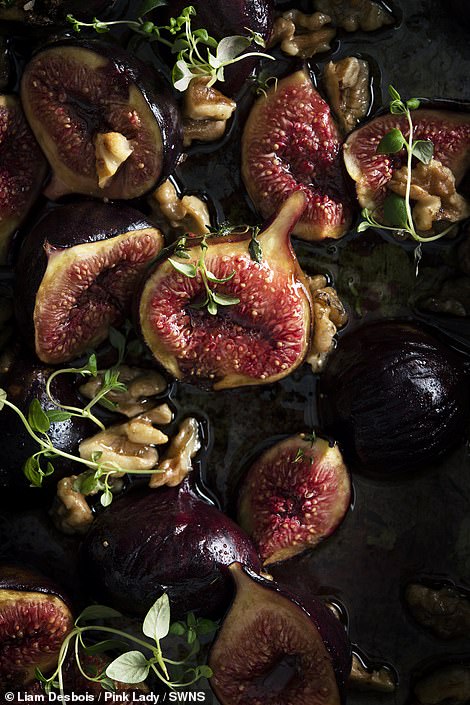 The wine is certainly running over in this shot by Patrick Desgraupes that won the Errazuriz Wine Photographer – Produce section as they collect wine samples for testing at the Clos Saint Patrice vineyard in France, renowned for its Chateauneuf-du-Pape (left). This image (right) of juicy baked figs with walnuts, honey and fresh thyme by Liam Desbois won the Marks & Spencer Food Portraiture category 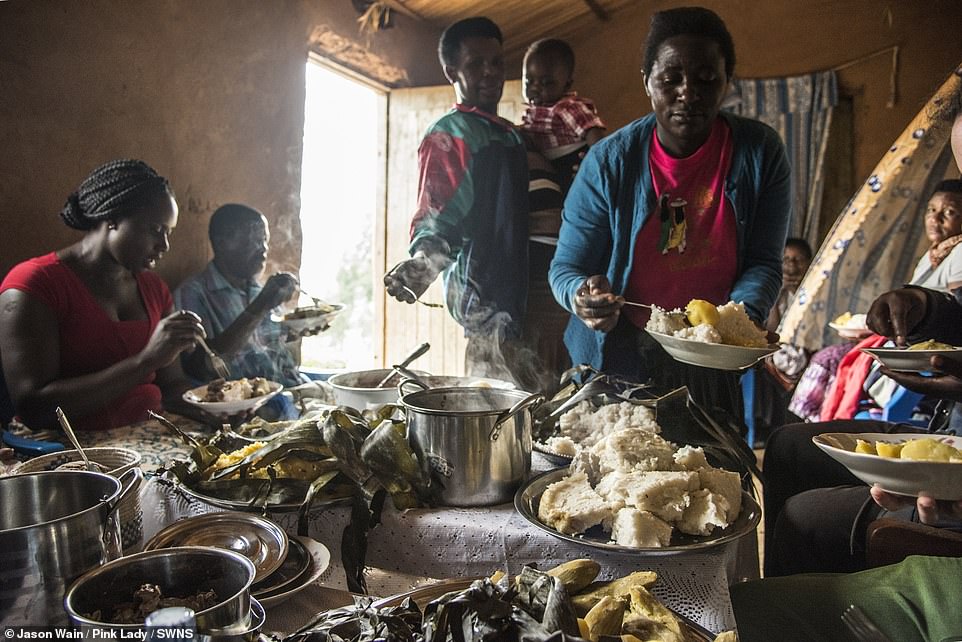 During a trip to Uganda with the charity Tearfund, photographer Jason Wain was frequently welcomed into the home of a pastor, along with half the village, where the group would be served a feast – almost identical each time – featuring goat or chicken, rice, gnut sauce, boiled potatoes, kidney beans and more 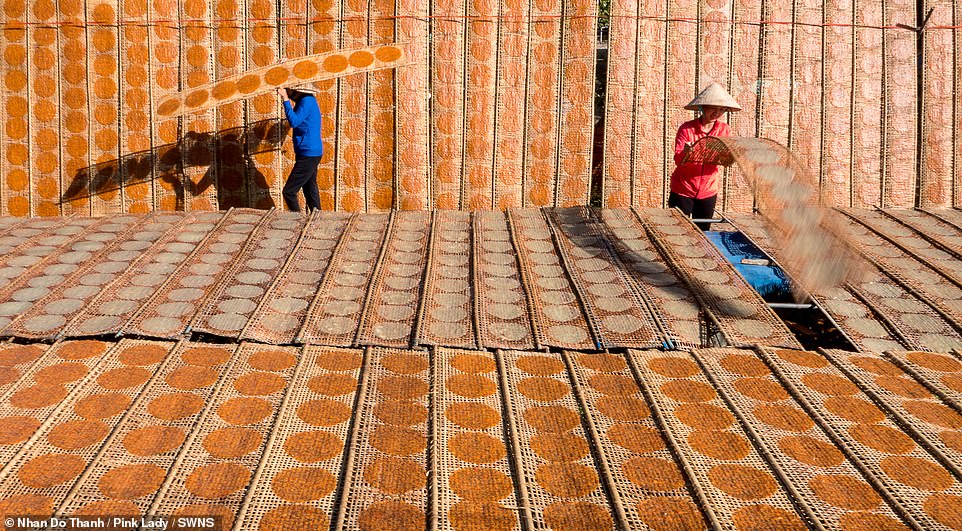 The Philip Harben Award for Food in Action, called Waiting for the Sun. This photo was taken in Tay Ninh province, Vietnam. It shows a Vietnamese traditional job – making Bánh Tráng, made with flour, shrimp, salt and sesame and is a Vietnamese favourite