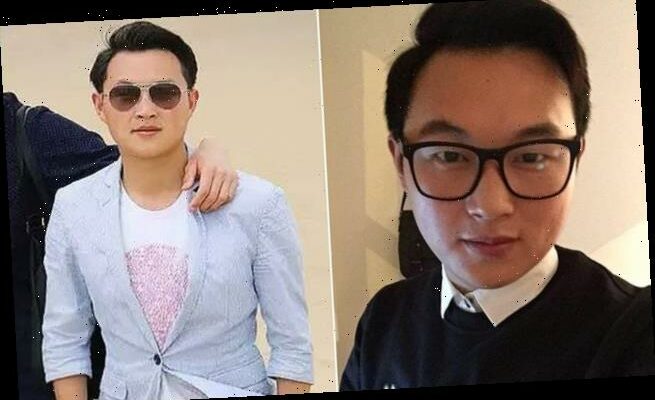 Chinese Students Association president, 26, who rarely had alcohol crashed and died in 100mph police chase after feeling ‘pressured’ to drink at meal with diplomats from China

A university student leader died in a road crash while fleeing police, hours after ‘feeling pressured’ into drinking at a meal with diplomats from China, an inquest heard.

PhD student Shiqiang Zhou reached speeds of up to 100mph in a VW Golf as he tried to evade pursing traffic officers in Bolton, Greater Manchester.

But the 26-year-old, who had earlier been ‘pressurised into a ‘rare’ drink at a meal with friends and diplomats from the Chinese Consulate, lost control of the vehicle on a roundabout during the police chase.

The car came off the road and smashed into a safety barrier on the A6. Mr Zhou suffered multiple injuries in the impact and died at the scene.

Tests revealed he would have been three and a half times the alcohol limit at the time of the crash, an inquest into his death heard. 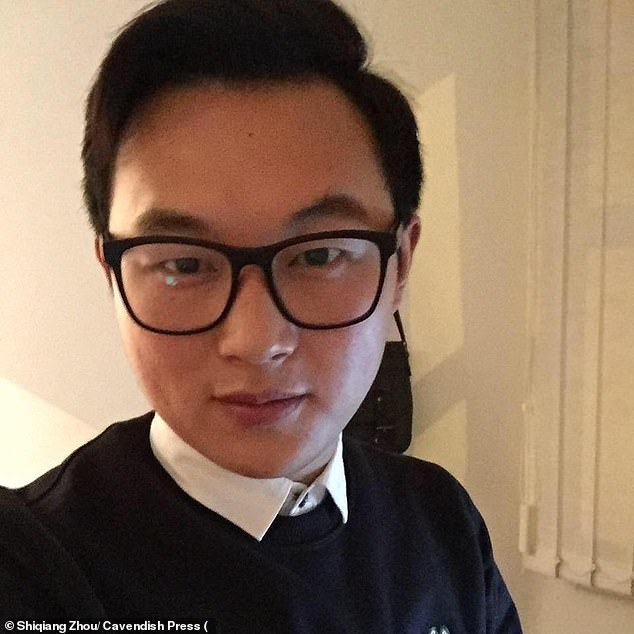 PhD student Shiqiang Zhou (pictured) reached speeds of up to 100mph in a VW Golf as he tried to evade pursing traffic officers in Bolton, Greater Manchester 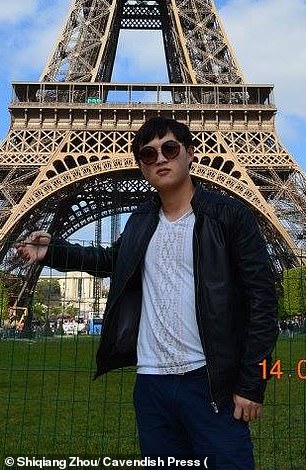 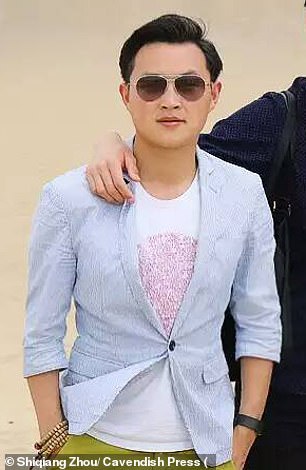 Mr Zhao, 26, who had earlier ‘pressurised into a ‘rare’ drink with friends, lost control of his vehicle on a roundabout during the chase. Mr Zhou suffered multiple injuries in the impact and died at the scene.

Bolton Coroner’s Court heard how Mr Zhou had moved from Jiangsu province in China to complete a masters course in engineering at Newcastle University.

At the time of his death, he was studying a PhD, with hopes of becoming a college lecturer.

On the night of January 9 last year, the coroner was told Mr Zhoa had been ‘pressurised’ into drinking alcohol after attending a function of the Manchester Chinese Students and Scholars Association (CSSA).

Following a meeting at the consulate itself, Mr Zhou went for a meal and drinks with friends and members of the Chinese Consulate.

He later agreed to drop off a number of friends at addresses across Greater Manchester. 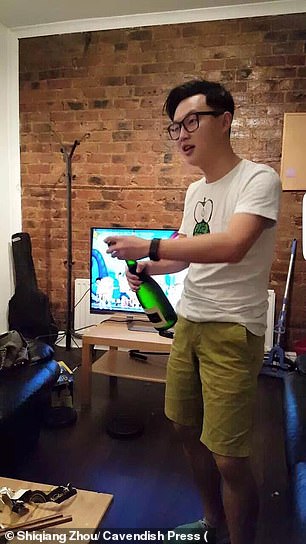 Mr Zhou then planned to drive to the home of his girlfriend’s parents in Preston.

His partner Chenxi Li, a medical student who had dated him for four years told the Bolton hearing: ‘We were very shocked to hear what happened.

‘Given the fact that he was not someone that drank excessively from my knowledge, I felt that he may have been pressured to drink on that occasion.’

Mr Zhou was first spotted by police on the A6 in Little Hulton, Salford, shortly before 1am.

In a statement PC Matthew Cowan who was driving a police Ford Transit said: ‘A car came through a junction while the lights were on red with excessive speed.

‘It was doing double the 30mph speed limit and I needed to stop the vehicle as I suspected it was stolen.

‘I activated the flashing lights but it did not stop. It slowed to 15 mph and had its left-hand indicator and continued at a slow speed and at this point, I suspected he was under the influence of drink or drugs.’

PC Cowan said the car stopped and he asked Mr Zhao to exit the vehicle.

But he told the inquest Mr Zhao then drove off again.

‘I thought if the vehicle was not stopped, it could become a danger to other road users so I pulled over alongside it and attempted to get in contact with the driver.’

He said the vehicle stopped for a second time, before speeding off, forcing PC Cowan to call for back-up.

PC Cowan, who continued to give chase, said: ‘By now the vehicle was a considerable distance away. He appeared to get further and further away. 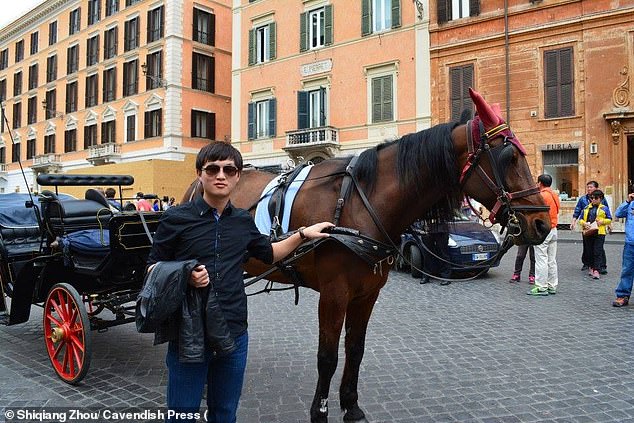 PC Cowan said the car initially stopped and he asked Mr Zhao (pictured) to exit the vehicle. But he told the inquest Mr Zhao then drove off again.

‘I could see the rear lights. Then he was completely out of sight. I approached the roundabout but as I got closer, I could see extensive damage.’

PC David Holmes, senior collision investigator at Greater Manchester Police said the car Mr Zhao was driving had a data recorder fitted to it which showed the vehcile had reached speed of 100mph approaching the roundabout.

‘It was 18 seconds before the police vehicle arrived at the scene. PC Cowan did nothing to contribute to the death of Mr Zhou.’

The inquest was told Mr Zhou had 295 micrograms of alcohol in 100 millilitres of blood in his system The legal limit for driving in blood is 80mg.

Following his death the student’s parents made the 5,000 mile journey from China to the UK.

But they were so overcome with the enormity of the tragedy they had their son cremated in Britain before taking his ashes back home.

Recording a verdict of road traffic accident Coroner Timothy Brennand said: ‘He was clearly thought very highly of in student circles and there’s no doubt that he was a very dutiful son.

‘He was a family man who often went back to China and he was close to his grandmother.

‘He was hardworking, highly intelligent and extremely determined to study, spending all his time in the hope that he might pass on his learning to others. He wanted to become a lecturer. 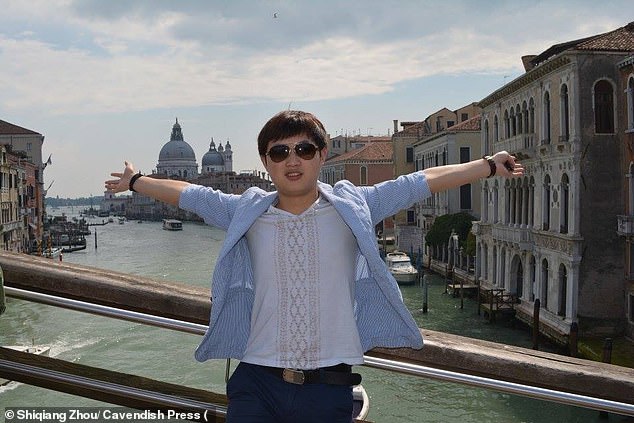 Following Mr Zhou’s (pictured) death the student’s parents made the 5,000 mile journey from China to the UK

‘His loss has affected not just his family but very many more people who had the privilege to know him.’

He added: ‘What happened was irrational, illogical and wholly out of character for him.

‘It was to be his better nature that got the better of him on the previous evening, when he may well have accepted drinks offered to him at the social occasion that he was participating in.

‘His better nature was demonstrated by the fact that he was responsible for dropping off a number of individuals in Manchester prior to being seen by the police.

‘The exceptionally high level of alcohol joined with the fact that he was not used to it has prompted a lack of judgement in getting behind the wheel of the car and it is possible he then panicked when police tried to stop him.

‘This matter is a complete tragedy but it is somewhat fortunate we are dealing with the death of just one individual rather than many others.

‘The police officers’ actions were measured and proportionate. Their decision making is a matter of commendation rather than condemnation.’

The Independent Office for Police Conduct investigated the incident and concluded that no further action was needed.