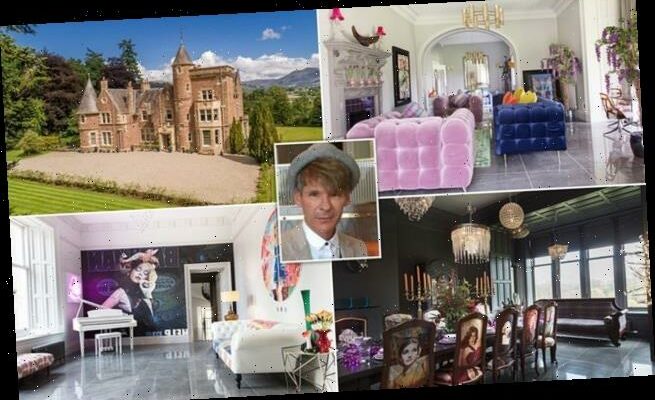 A stunning castle-turned-party pad that was renovated by renowned artist Stuart McAlpine Miller has been put on the market for £2.1million.

The Gart, in Callander, Scotland, is a renovated 19th-century stone castle that combines historic period features with the contemporary spin of its current designer owners Nikki and Stuart McAlpine Miller.

The 13-bedroom country house, which sits above the River Teith, is set in 12 acres of gardens and dates back to 1835, before the building was substantially rebuilt and enlarged after a fire in 1901. 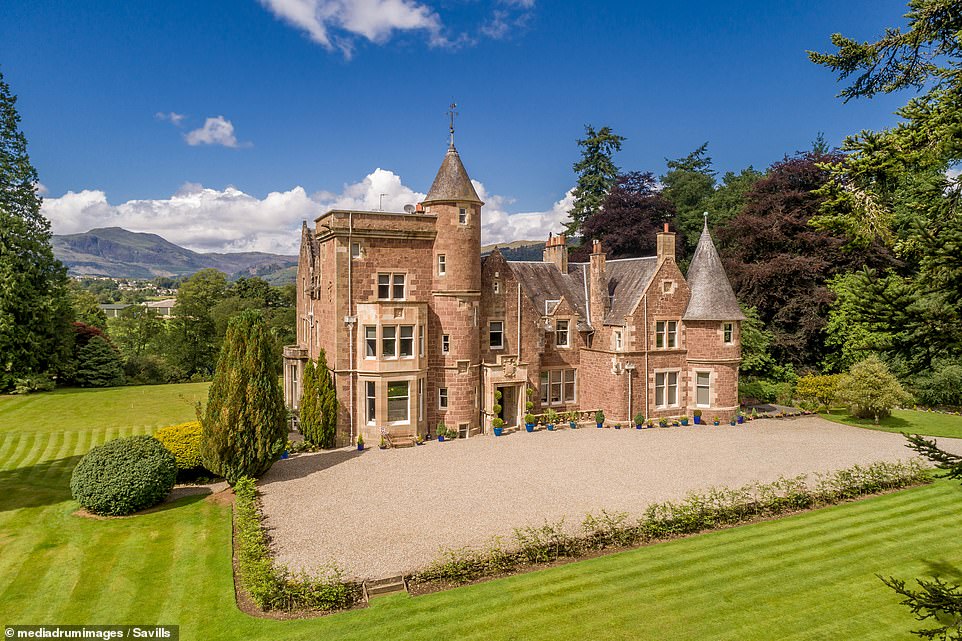 The Gart, in Callandar, Scotland, (above) is a 19th century renovated castle set in 12 acres with beautiful views of the landscape and nearby River Teith 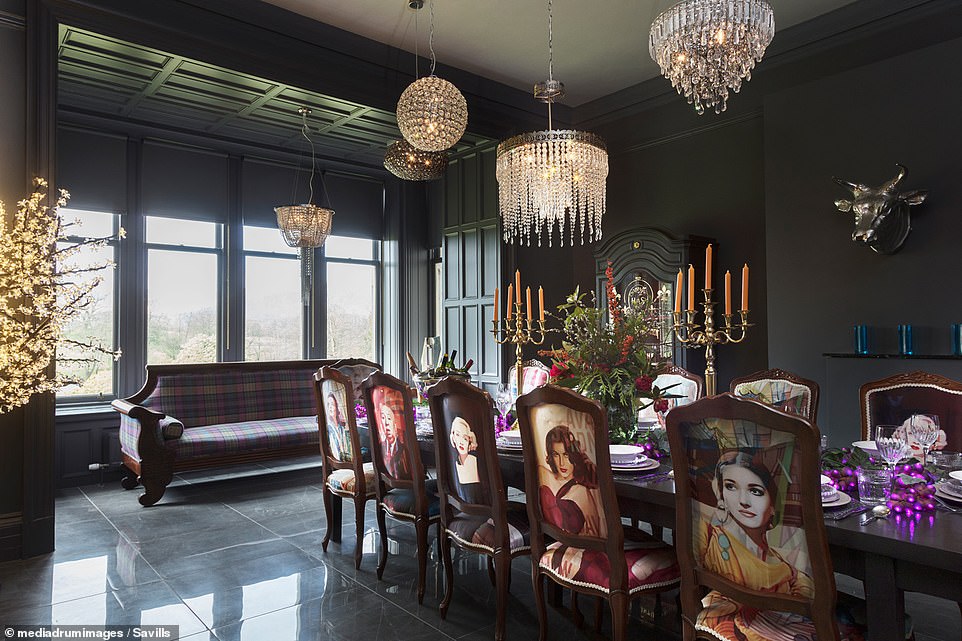 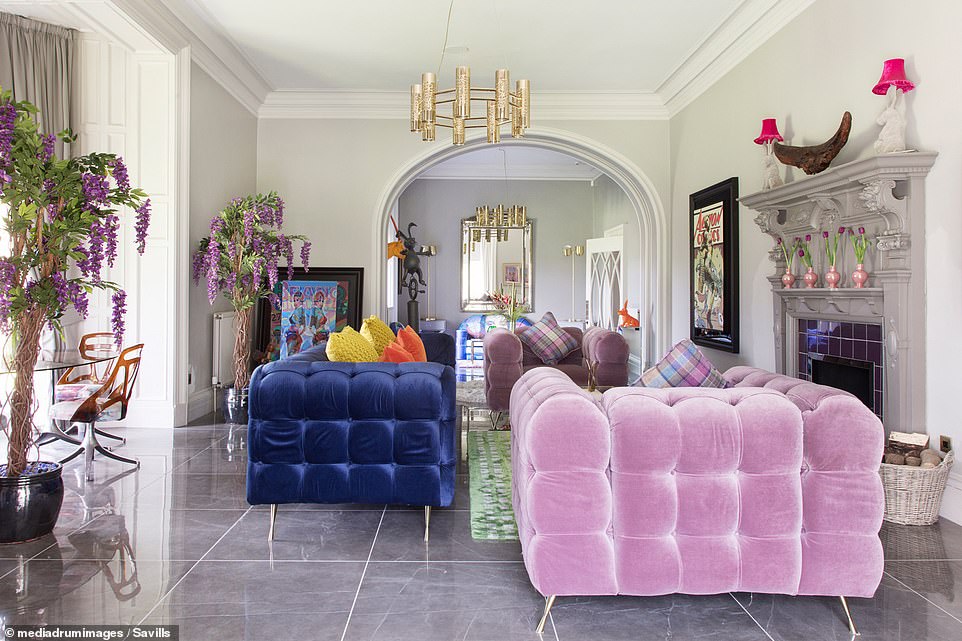 Nikki McAlpine Miller explained how both she and Stuart wanted to be ‘considerate throughout’ with the colours they used. The morning room (pictured) shows the couple’s bright and wide ranging palette

The baronial property was renovated in 2016 as a joint project by Nikki and Stuart – who was artist in residency at The Savoy Hotel, London – who infused their own unique stamp on the interior.

Nikki, who describes herself as a partner at McAlpine Miller Ltd on her LinkedIn profile, told estate agents Savills: ‘I love original features, and I like the mix of contemporary and traditional.

‘We were definitely looking for a place with large open spaces.

‘We wanted to create an art gallery within the house, so we wanted to have a lot of wall space and be considerate throughout with colour.

‘It was a blank canvas at the time, but the view from every window was like a painting.’

The mansion, which sleeps up to 26 people, is available to exclusively hire out for functions, special occasions, corporate events or those wanting to live in luxury. 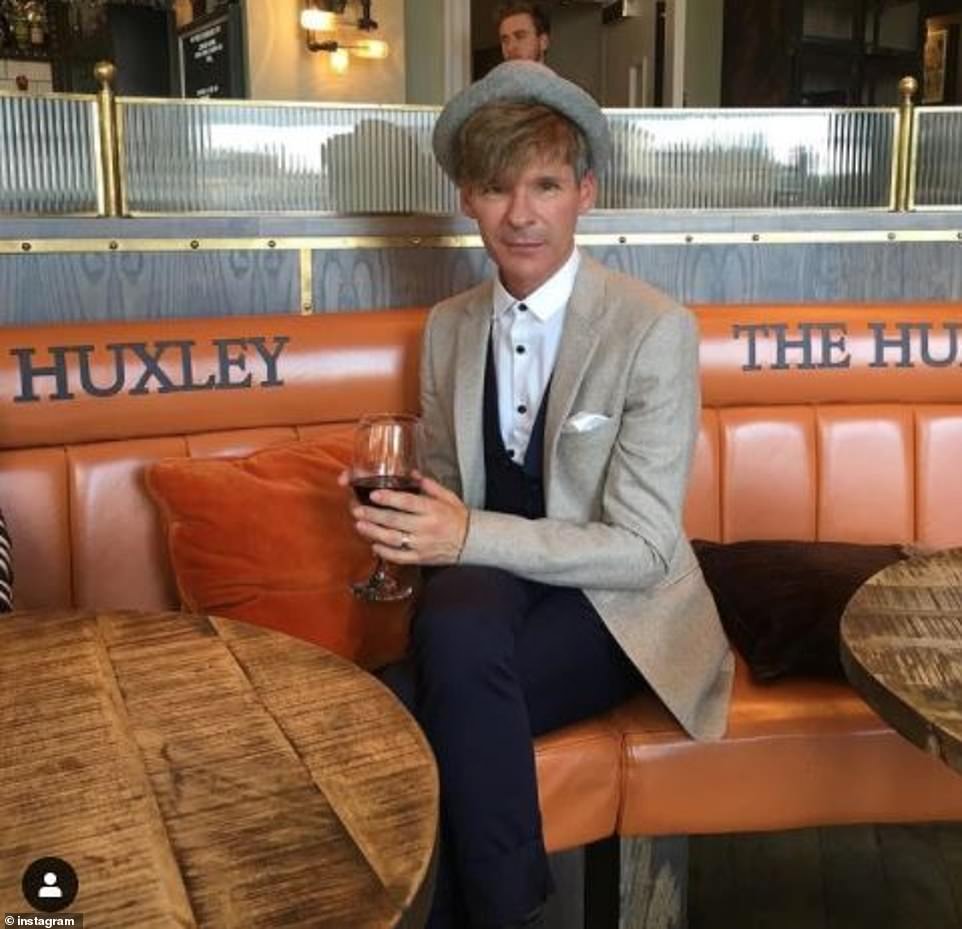 Stuart McAlpine Miller, pictured here on Instagram, was resident artist at The Savoy Hotel, from 2012 to 2016. He and his wife Nikki worked together renovating the interior of their Scottish castle The Gart 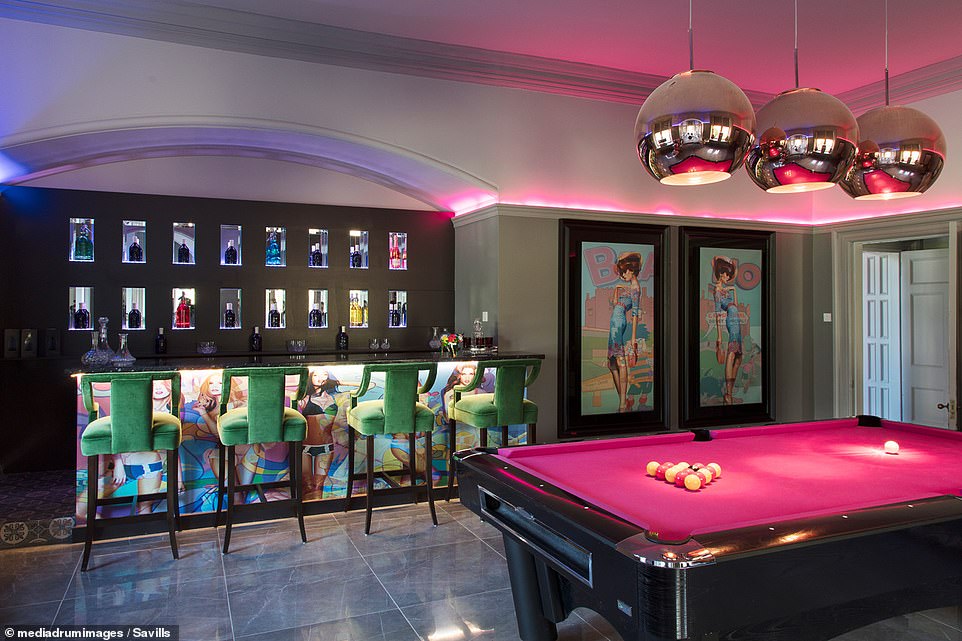 The Gart is exclusively rented out as luxury accommodation for corporate events and weddings. Lockdown would have been a breeze with amenities such as the billiards room (above) on offer 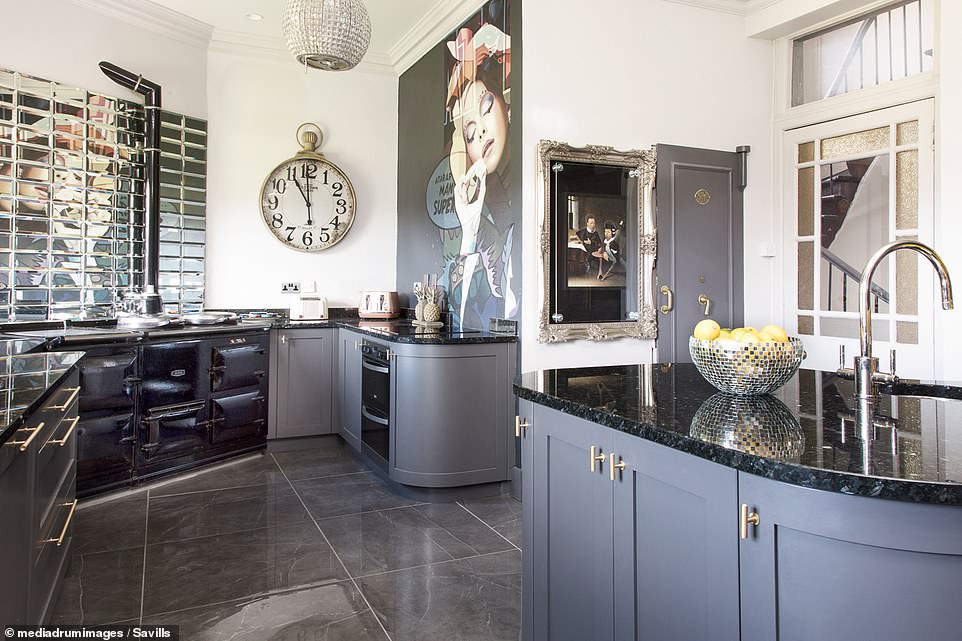 The Gart’s kitchen (above) displays the classic colour combination of lights and darks, and Nikki worked with David Thompson Designs when creating this stunning kitchen space

The property, which was originally much smaller and built by Scottish architect William Burn, retains its period features such as the high ceilings and panelling, and has blended this with contemporary elements including a 50ft drawing room, a gin and whiskey bar and home cinema.

The avant-garde property is currently on the market with Savills for £2.1million. 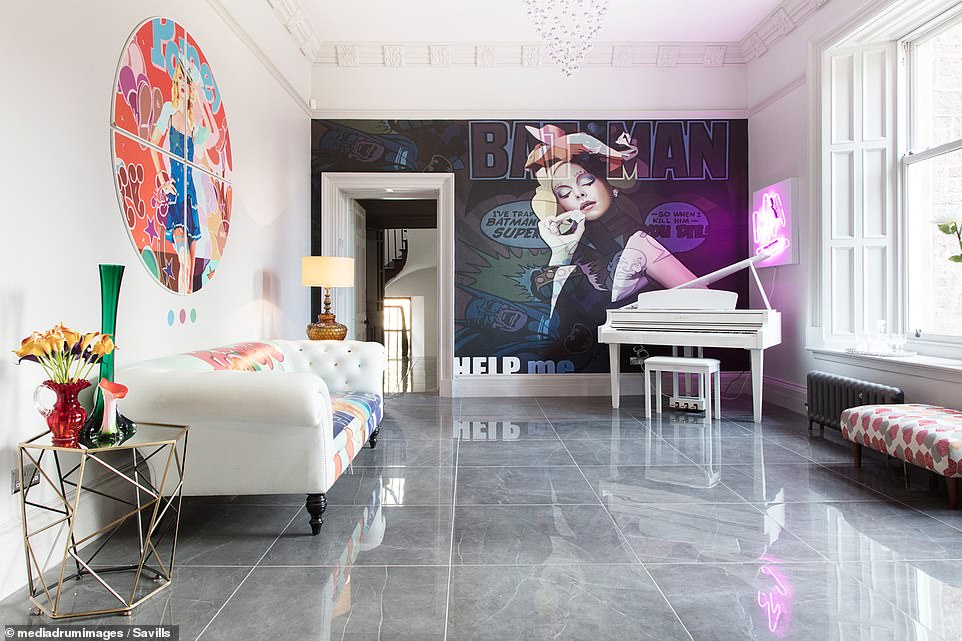 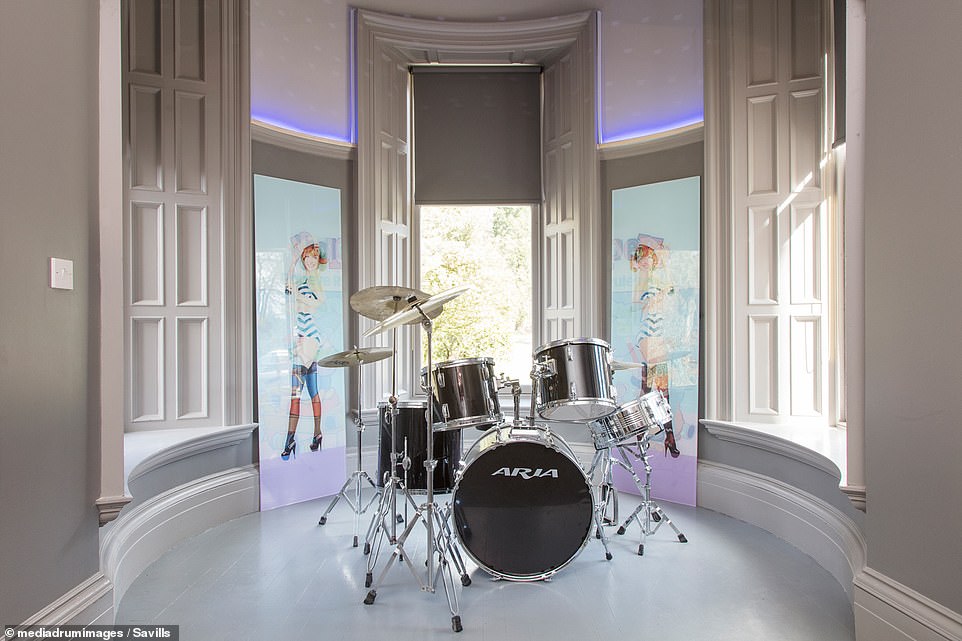 The 19th century castle is full of space such as this little nook – which turns out to be perfect for a drum kit. The party pad has been listed on the market with estate agents Savills for £2.1million 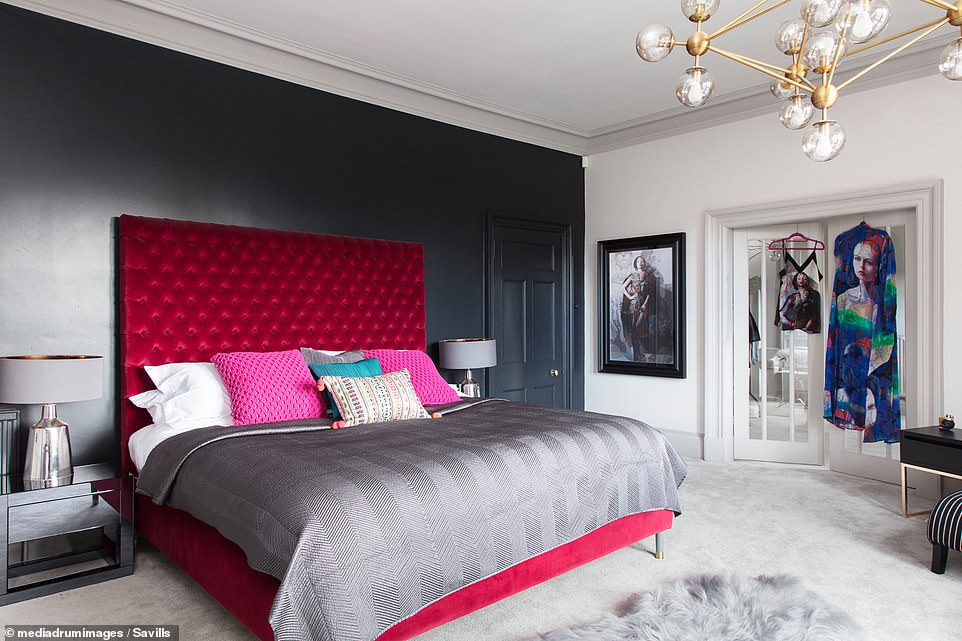 One of the property’s 13 bedrooms on offer. In total, The Gart, which was renovated by the designer couple in 2016, can sleep up to 26 people

As part of their listing Savills state: ‘ The Gart is a remarkable property in a truly spectacular location. The McAlpine Millers have created a home for themselves, and an incredible space for guests, that feels both personal and very unique.

Jamie Macnab, Savills’ property agent, added: ‘The Gart has been given a whole new dimension by the style, workmanship and luxurious edge of the contemporary elements so boldly conceived and executed by Stuart and Nikki.’

For more information about The Gart, please see Savills’ listing on their website.