A jealous husband who strangled his estranged wife to death with a scarf after trying to have her exorcised was jailed for at least 26 years.

Mohammed Ali, 32, broke into the former marital home in Bow, east London and murdered Nazia Begum after lying in wait for her in a small cupboard for ten hours.

He waited for their two young daughters to go to bed before launching his attack and ambush on Ms Begum, 25. 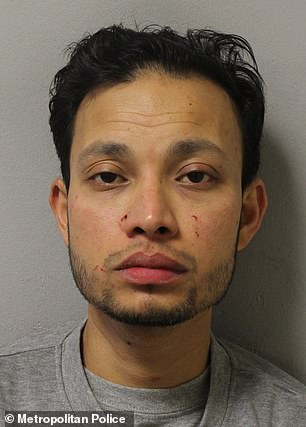 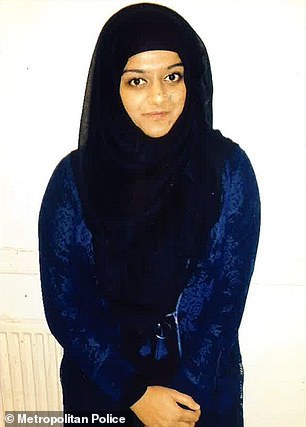 Mohammed Ali, 32, (left) broke into the former marital home in Bow, east London and murdered Nazia Begum (right) after lying in wait for her in a small cupboard for ten hours

Bloodied, he then got into bed to sleep next to his children, only alerting the police the next morning, when he greeted them holding a cup of tea.

In a chilling 999 call he made after the murder, Ali calmly told the operator he’d ‘accidentally’ killed his wife ‘with a scarf’.

His murder trial at the Old Bailey heard Ms Begum was a Muslim but wanted to live a more Western lifestyle, rejecting Ali’s strict rules on how she had to behave.

His daughters – now six and three – have ‘failed to grasp the finality’ of their mother’s death, the court heard, with the youngest one regularly going ‘looking for her’.

Sentencing Ali, of Barking, Judge Wendy Joseph said: ‘Ali was a strict Muslim and required of her a lifestyle that she found intolerable.

‘He could not accept this was, sadly, a bad marriage. There was evidence of his being manipulating and overbearing towards Nazia.

‘With tragic consequences, he took things into his own hands.’

Ali was introduced to Ms Begum through their families and the pair quickly married in May 2015, expecting their first child within a month.

However the relationship broke down soon after, with the defendant claiming she ‘needed to be exorcised’.

The court heard Ali moved out, but ‘pumped [his children] for information’ when he discovered his wife was in a new relationship with a childhood sweetheart. 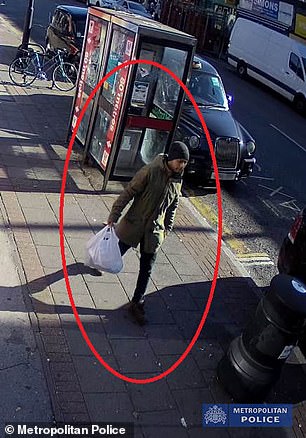 It was during one such contact session with his children in October 2018, at the victim’s mother’s house ,that Ms Begum Ali told her husband their relationship was over.

After spending all night ‘festering’ on wild accusations about his wife, Ali bought items including two knives, a scarf, some flex, a door handle and screws.

The court heard that Ali intended to use the screws so he could fix them to the inside of a cupboard in his victim’s flat to help secrete himself upon her return.

The court heard Ms Begum bathed, fed and played with her children before putting them to bed on October 21.

It was then that Ali, who had been lying in wait since around 1pm, sprung from the cupboard and attacked her.

She was found with multiple injuries to her head and ribs where he had punched her, then left her dead in her own blood after tying a scarf around her.

Ali then slept at the flat before phoning the police at 5am the next day. He admitted killing his wife but denied murder.

In an impact statement, Ms Begum’s mother Janahara Begum said: ‘The day Nazia died was the worst day of our lives. Our hearts are broken beyond repair.

‘How do I explain to a three-year-old that her mother has been murdered? They will never feel her comfort again.

‘Every day when they ask me when their mother will come back from Heaven, my heart breaks even more.’

In mitigation, defence counsel Bernard Richmond said the couple’s relationship was ‘doomed from the start’.

He added: ‘Ali was a naive young man with a plainly fixed attitude of what to expect of a wife.’

Ali showed no emotion as he was sentenced to life imprisonment, to serve a minimum term of 26 years before being considered eligible for parole.

He turned briefly to acknowledge a relative in the public gallery before being led from the dock to begin the jail term.