Chilling footage captured the ‘horror movie’ moment a stranger sneaked into a woman’s car after she pulled up at traffic lights in broad daylight.

Steven Partington, 44, was caught on CCTV loitering in a blind spot behind the woman’s white Astra before he silently opened the rear passenger door and hid on the back seat.

The 40-year-old woman only realised an intruder was in the car when she looked in the rear view mirror and Partington suddenly sat up ‘like a scene from a horror movie’.

He then ordered the woman to ‘stay calm’ and ‘drive’ before he grabbed the gear stick as she drove through Nottingham city centre.

She desperately tried to alert other road users by beeping her horn and banging on her windows during the terrifying ordeal on November 6 last year.

Partington eventually grabbed the woman’s handbag and fled. The distressed woman managed to drive home where she called police who launched a major man-hunt.

Partington was caught after the woman’s handbag was found dumped in a car park alongside a green coat which contained bail paperwork in his name.

Before robbing the woman, he had spent a night in police cells after he was arrested on suspicion of being drunk and disorderly following a night boozing and taking drugs.

Partington, of no fixed address, admitted robbery at Nottingham Crown Court and was jailed for four years and eight months yesterday. 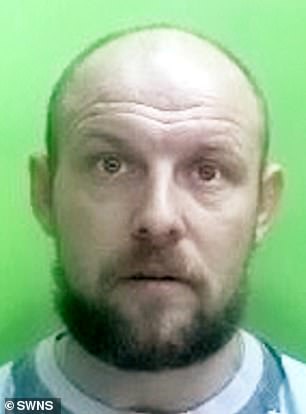 Steven Partington, 44, was jailed for four years and eight months after he admitted robbery at Nottingham Crown Court

Speaking after the case, the woman, who did not want to be named, recalled the chilling moment she realised Partington had sneaked into her car.

She had been buying birthday presents and a cake for her friends and husband in the city’s Castle Marina Retail Park and was on her way home when Partington struck.

She said: ‘I was in my car listening to the radio and suddenly I felt a movement in the car.

‘I just thought it was something falling over in the boot.

‘My brain was racing, thinking of what it could have been, I hadn’t turned sharply or anything.

‘I just had a quick glance into the mirror and there he was. I instantly screamed out.

‘It was like a scene from a horror movie. 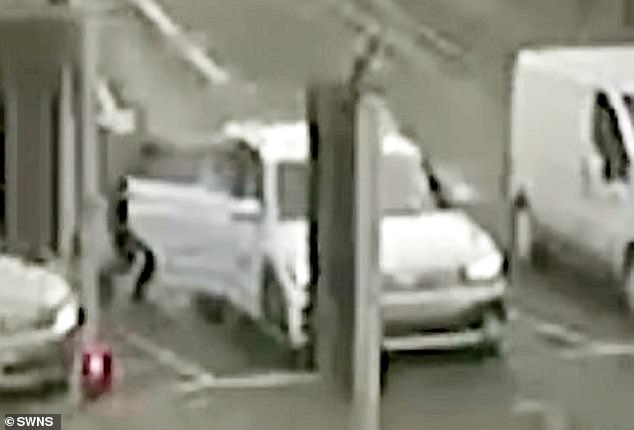 ‘His face appeared. I can’t explain how I felt. He just popped up from a crouching position. Suddenly I wasn’t alone in the car.

‘Then I thought was this a mistake, did he think I was a taxi?

‘Was it all a misunderstanding? He wasn’t talkative, he wasn’t chatty. All he said to me was ‘stay calm’. He wasn’t panicky or aggressive.

‘At that point I had no idea what his intentions were.

‘Was he dangerous? What does he want from me? Does he have a weapon on him? Is he a rapist? Is he going to want me to go somewhere?’

The woman said that after she came out of the initial shock she desperately tried to raise the alarm. 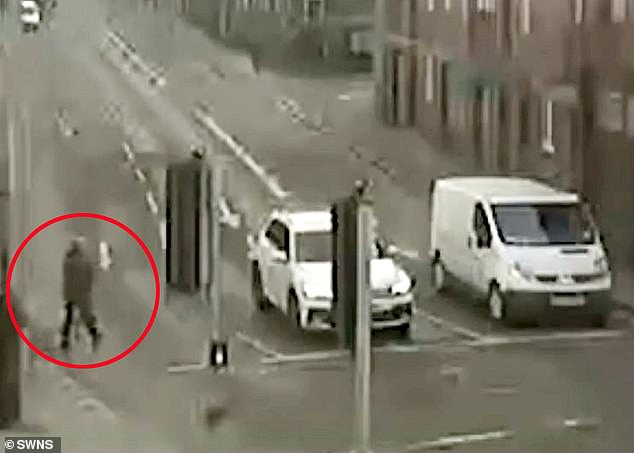 He ordered the woman to ‘stay calm’ and ‘drive’ before he grabbed the gear stick as she drove through Nottingham city centre. She desperately tried to alert other road users by beeping her horn and banging on her windows during the terrifying ordeal

She said: ‘I now had to think clearer and how could I get him out of the car.

‘I thought I had to alert someone in the city centre and felt a bit calmer that there were people out and about.

‘I began beeping my horn and banging on the windows to anyone around, but no one really paid much attention.

‘He just told me to ‘drive’ and I decided to turn down a side street, where I thought there might be more people, but my heart-sank, it was deserted. I was alone.

‘He then began feeling around, touching the arm-rest and then he touched my sleeve.

‘That really freaked me out. I tried to lean out the window and keep away from him.

‘I felt completely helpless. I should be in control in my own car.

‘He then grabbed my handbag and he got out the car. Just like that, it was over.

‘It only lasted a few minutes, but to me it felt like a lifetime. I immediately locked myself in, drove home and rang the police.’

Officers trawled CCTV for the mystery robber but he was finally caught when bis bail paperwork was found three days later in a green coat.

Footage from a bus immediately before the incident showed him wearing the coat and walking in Nottingham city centre.

Detectives were able to follow Partington through the city until CCTV showed him sneaking into the victim’s car at the junction of Cranbrook Street and Lower Parliament Street.

Detective Constable Richard Evans, of Nottinghamshire Police, said: ‘This was a particularly harrowing and a very alarming incident, which initially left the victim traumatised.

‘She was extremely frightened and did not know what Partington’s intentions were.

‘We’d like to thank the member of the public who recovered the victim’s items, along with Partington’s coat, which was crucial to solve the case.’