Hotel guests at the centre of South Australia's growing COVID-19 cluster are being moved to another hotel with some people being forced to extend their quarantine period beyond 14 days.

The cluster grew by three cases to 20 on Tuesday morning after Victoria, Queensland, Western Australia, Tasmania and the Northern Territory all declared SA a hot spot. 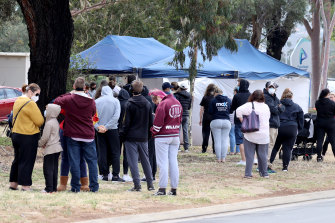 Queues of people line up for a COVID-19 test in Adelaide on Monday. Credit:Getty Images

Guests staying at Adelaide's Peppers hotel received a letter under their door from SA Health on Monday advising they would be transferred to an undisclosed location imminently.

"Your safety is our highest priority and as a result, we will be transferring all travellers to another Medi-hotel within the next 24 hours," the letter, seen by this masthead, said.

"We understand that there are guests whose quarantine period is due to end [on Tuesday] however to ensure your safety and to minimise the Public Health risk, this time will be extended, which may be up to 14 days.

"We sincerely apologise for any distress or inconvenience this may cause."

SA Premier Steven Marshall said it was "good news" that the number of new cases had not spiralled. Seventeen of the 20 cases are from the same family.

"It's still early days and there's still an anxious 24 or 48 hours in front of us but the good news is it's a very different situation we've woken up to today compared to yesterday morning," he told Adelaide radio station 5AA.

"The problem in this instance is the two security officers and the person working back of house had no symptoms. It's a very difficult situation.

"I expected yesterday that many [states] would impose the border controls and restrictions back in place. If we get on top of this I think we might see those lifted fairly quickly as well."

Adelaide resident Luke Newcombe returned from the UK two weeks ago and was due for release early on Tuesday morning from the Peppers hotel.

"It's pretty horrid at the moment," Mr Newcombe said. "No one knows where they're going."

Mr Newcombe said he had a job interview and doctor's appointment lined up on Tuesday. He is unhappy that travellers are paying the price for other people's failures.

"Why am I being punished for the lack of organisation on their behalf?" he said. "I'm happy to put up my hand and do another test."

He was also baffled how two security guards and a cleaner contracted the virus in the first place.

"You're locked in your room, you're brought meals three times a day. They knock on your door, you wait a few seconds. You can't open your door while they're there. How did two security guards and a cleaner get it? It just seems a little bit off to me," he said.

SA Health Minister Stephen Wade on Tuesday said although public health authorities were "confident" that the Peppers hotel was the source, the first case had still not conclusively been identified.

"Three of the staff at the medi-hotel have proved positive, but one of those people is a back of house person who would have had negligible contact with residents," he told ABC Radio National's breakfast program.

Mr Wade said two of the infected family members who were aged care workers had only worked at a single facility – Anglicare SA aged care in Brompton – while infectious.