Ruling ANC party to table motion of no confidence against President Jacob Zuma on Thursday. 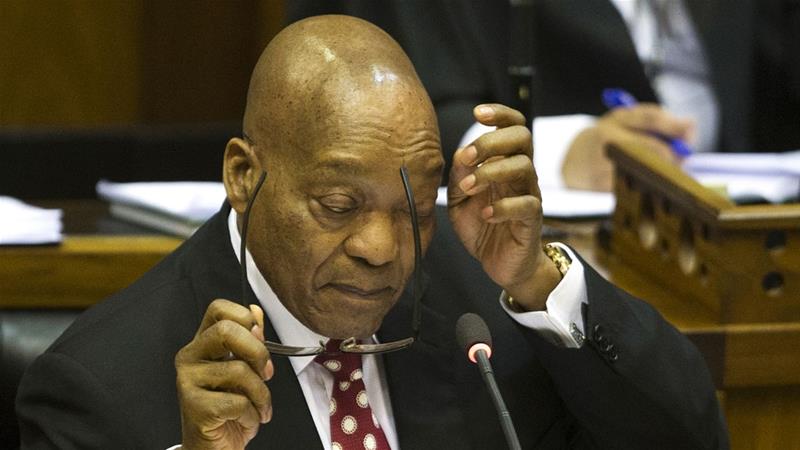 South Africa’s ruling African National Congress (ANC) party will table a motion of no confidence against President Jacob Zuma in parliament on Thursday, following the president’s refusal to resign.

Wednesday’s decision of the ANC to push ahead with the vote comes amid high drama in which police in Johannesburg raided a luxury home of the Gupta family, an Indian immigrant businessmen family that lies at the heart of corruption allegations levelled at Zuma.

On Tuesday, the ANC asked Zuma to step down over the allegations.

In a briefing to South African state television on Wednesday, Zuma said he was confused about why he was recalled by the ANC.

He said he did not understand why he is being told that he had to leave office, as the party previously stated it wanted “to avoid two centres of power”.

After Cyril Ramaphosa won the election for the ANC presidency in December, it was decided that Zuma was to be president of the country for a further 19 months before scheduled elections.

“I was asking (in the meeting with ANC leadership) what have I done? What is this hurry? In the process, people said that ‘Zuma must go’. It happened before but I found it very strange to be told by my organisation that I must go,” the president said.

“We have a lot of resolutions to deal with (as the ANC)but we are spending so much time with ‘Zuma was must go’. I don’t understand what’s the rush,” Zuma added.

ANC treasurer general Paul Mashatile told a media briefing on Wednesday that the party is starting “a new era.

“The conference of ANC (in December) has created new hope. Our people want to see change. We want to go with renewal,” Mashatile said, adding that the deadline given to Zuma would expire on Wednesday night.

Mashatile said that Ramaphosa could be sworn in as president as soon as tomorrow, if Zuma goes.