Some Republicans “are very concerned” about Donald Trump potentially launching a 2024 presidential bid before November’s midterm races, which could upend contests across the country, Maryland Gov. Larry Hogan said Sunday.

“We had discussions about that at the Republican Governors Association last week,” Hogan told ABC “This Week” co-anchor Jonathan Karl of a possible Trump announcement, which Trump has repeatedly teased.

“I think most people are very concerned about the damage it does to the party if he announces now,” said Hogan, one of Trump’s loudest GOP critics. “And it may help in very red states or very red districts. But in competitive places and purple battlefields, it’s going to cost us seats if he were to do that.”

Karl asked Hogan about the House Jan. 6 committee hearings this summer, which most recently detailed Trump’s inaction responding to last year’s Capitol riot. Hogan contrasted that with his own decisions that day as a leader of a neighboring state.

“While the president was watching television and while the vice president [Mike Pence] was being whisked off to save his life and members of Congress, I was on the phone with the leaders of Congress. I was calling up the National Guard. I was sending in the Maryland State Police,” he said.

Hogan said the lack of response to the hearings from many leading Republicans was “disappointing,” especially in light of how they criticized Trump immediately after the Capitol attack. He said that the most striking part of the last hearing was watching outtakes from an address that Trump recorded on Jan. 7, 2021, the day after the insurrection.

The clips show a visibly frustrated Trump saying that he doesn’t want to read a line from the teleprompter that states “the election is now over.”

“Nothing really surprised me except those outtakes, I had never seen. And it showed the real thinking,” Hogan said, adding, “With those outtakes, you could see the anger.”

Hogan went on to reflect on the future of the Republican Party. He said the primary elections this year were just the start of a “long, tough fight” over GOP identity and whether Trump’s influence will endure. 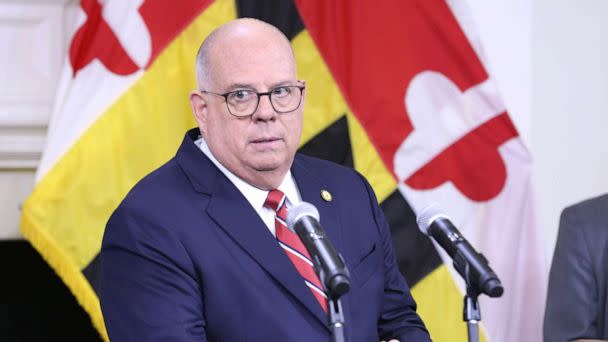 “It’s not going to be easy. We’re going to win some; we’re going to lose some,” he said. “But I think the final chapter on some of this will be in November, when we lose some races.”

That was his prediction in Maryland where his handpicked choice, former state Commerce Secretary Kelly Schulz, last week lost out to the Trump-backed candidate, state Del. Dan Cox, in the Republican gubernatorial primary to succeed Hogan.

Cox has been sharply critical of Hogan, who in turn said Cox is too right-wing to win in Maryland, labeling him a “conspiracy theorist.”

According to data collected by FiveThirtyEight, at least 120 election-denying candidates who ran for all sorts of down-ballot offices advanced from their primaries and will be on the general election ticket in November.

Cox likewise attacked the 2020 election. He called former Vice President Mike Pence a “traitor” for certifying the 2020 election results in now-deleted tweets. (He later apologized.) He also organized buses to drive Maryland residents to Trump’s rally on Jan. 6, 2021, though he said he didn’t go to the Capitol and denounced the rioting that broke out there.

“It’s a big loss for the Republican Party,” he said. “And we have no chance of saving that governor’s seat.”

While Hogan also blamed Democrats for boosting Cox’s profile in the primary through advertising, as they have done with more conservative candidates in other elections, Karl noted that it was Republican voters who ultimately chose Cox, despite or because of his history of attacking the 2020 election and more.

Cox’s victory did not dissuade him from continuing to make his case for an anti-Trump GOP, he said.

“Does this make you more or less likely to run for president in 2024?” Karl asked.

“It makes me more determined than ever to continue the battle to win over the Republican Party and take us back to a bigger tent, more Reagan-esque party,” Hogan said. “We’ve got our work cut out for us. But I’m certainly not giving up.”

Some in GOP ‘very concerned about the damage’ Trump does if he launches 2024 bid before midterms: Hogan originally appeared on abcnews.go.com