‘Who will be next to resign?!’ : Social media erupts with memes and compares the Government to a toppling house of cards as Rishi Sunak and Sajid Javid resign

Social media has been awash with memes and mockery today after Twitter users compared Boris Johnson’s cabinet to a toppling house of cards after the bombshell resignations of top Tories Rishi Sunak and Sajid Javid.

Thousands were quick to ask who will be next to hand in their resignation as the beleaguered Prime Minister’s tenure hit another bump in the road with his Health Secretary and Chancellor both quitting in stunning fashion.

Several Twitter users honed in on timeless clichés, sharing GIFs of rats fleeing a sinking ship, a house of cards collapsing and dominos rapidly falling one by one as Mr Johnson’s premiership teetered closer to ruination.

Others compared Tuesday’s dramatic turn of events to the final days of Theresa May’s doomed premiership, while mocked-up campaign slogans of ‘Get Borexit Done’ were also circulating across the Internet.

The resignations came as Mr Johnson was forced into a humiliating apology over his handling of the Chris Pincher row after it emerged he had forgotten about being told of previous allegations of ‘inappropriate’ conduct.

This latest Westminster sleaze row has threatened to imperil Mr Johnson’s political future yet again, with No10 giving a series of conflicting accounts about what the PM did or did not know of Mr Pincher’s past conduct.

Below, MailOnline details some of the funniest reaction seen online after Tuesday’s bombshells: 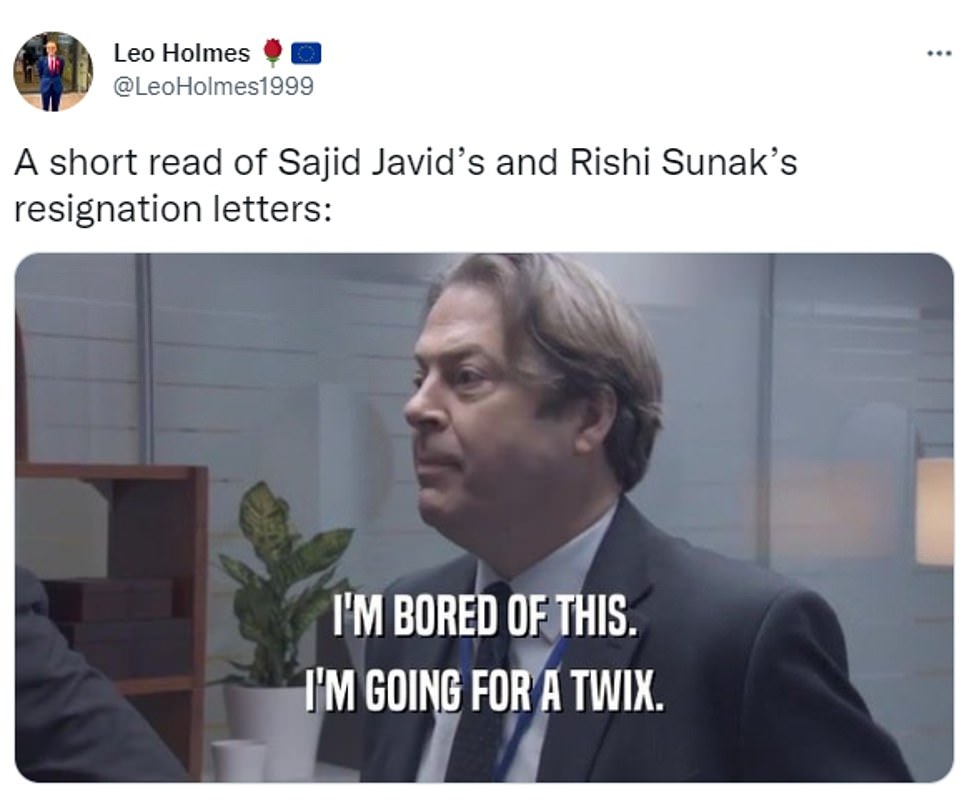 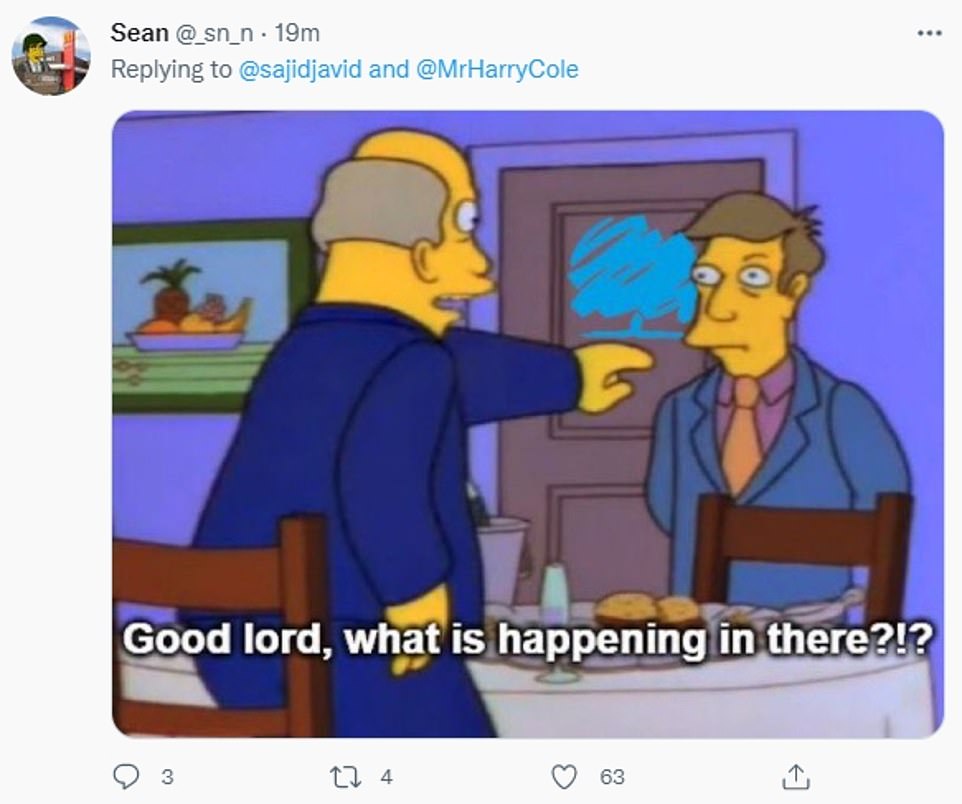 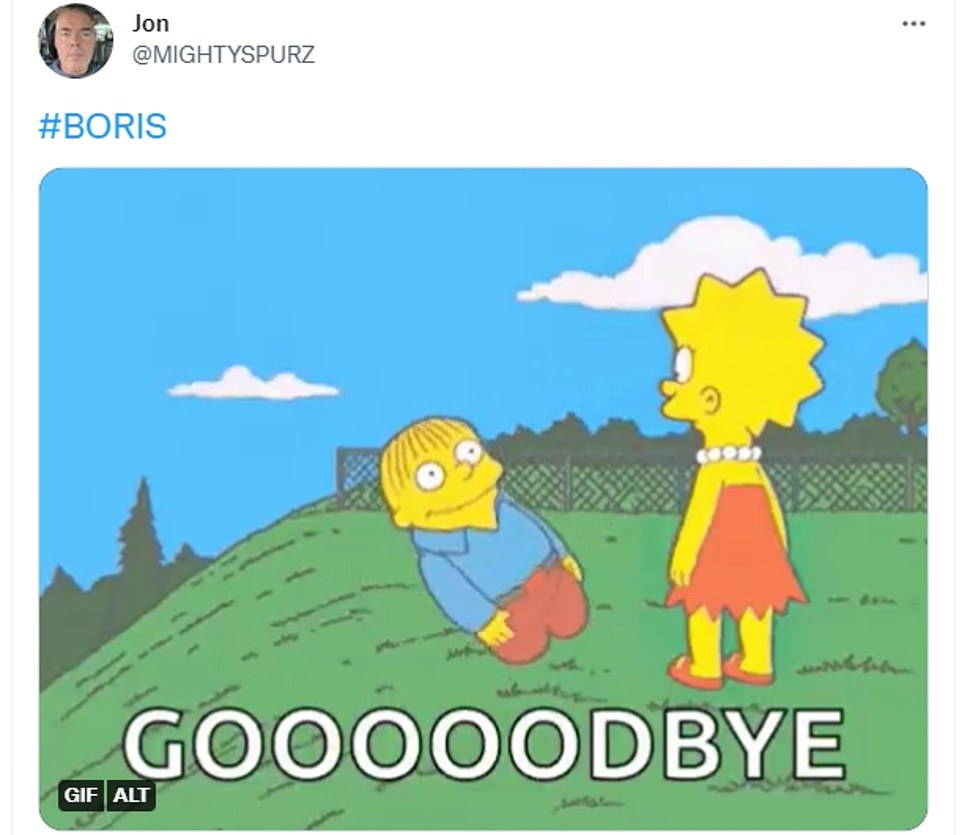 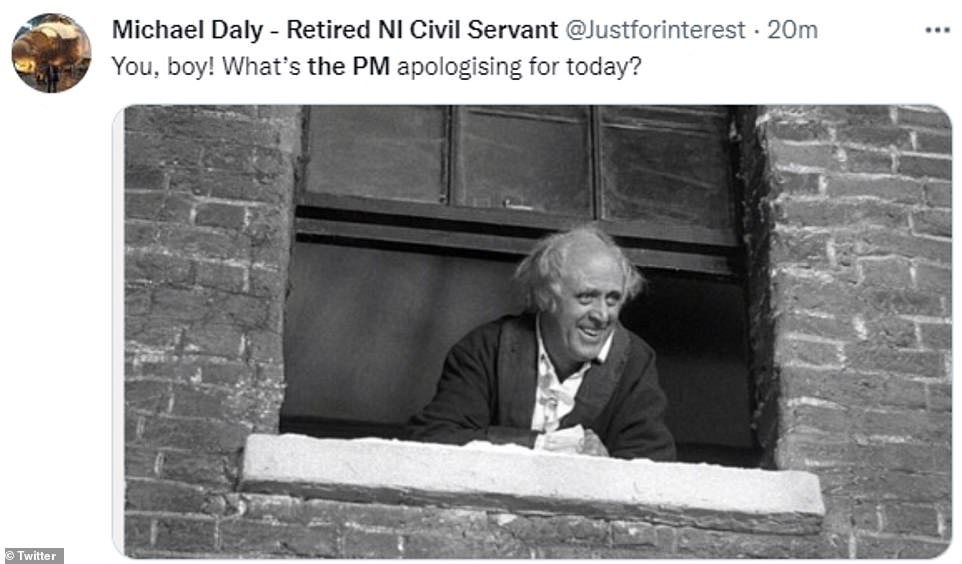 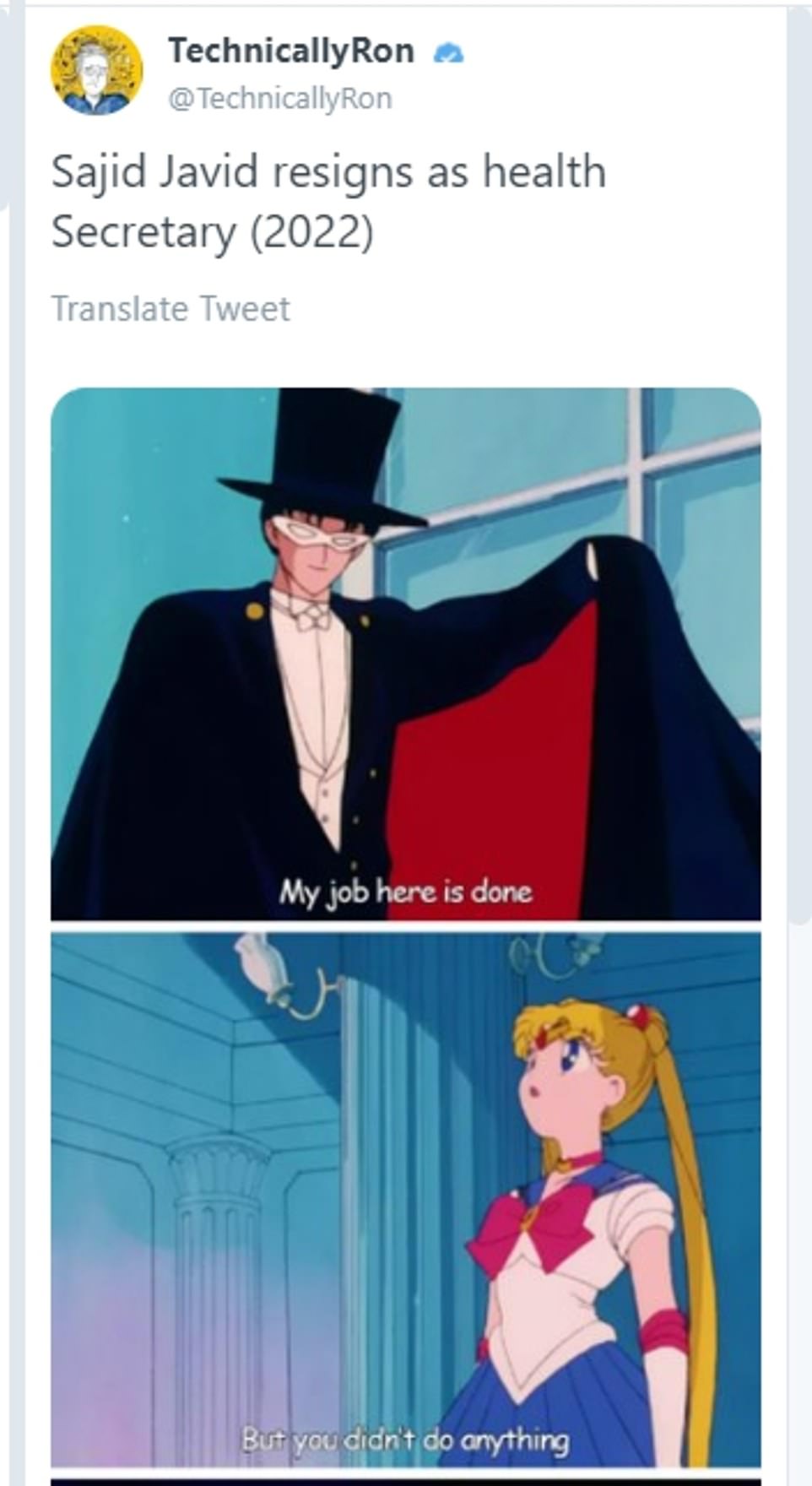 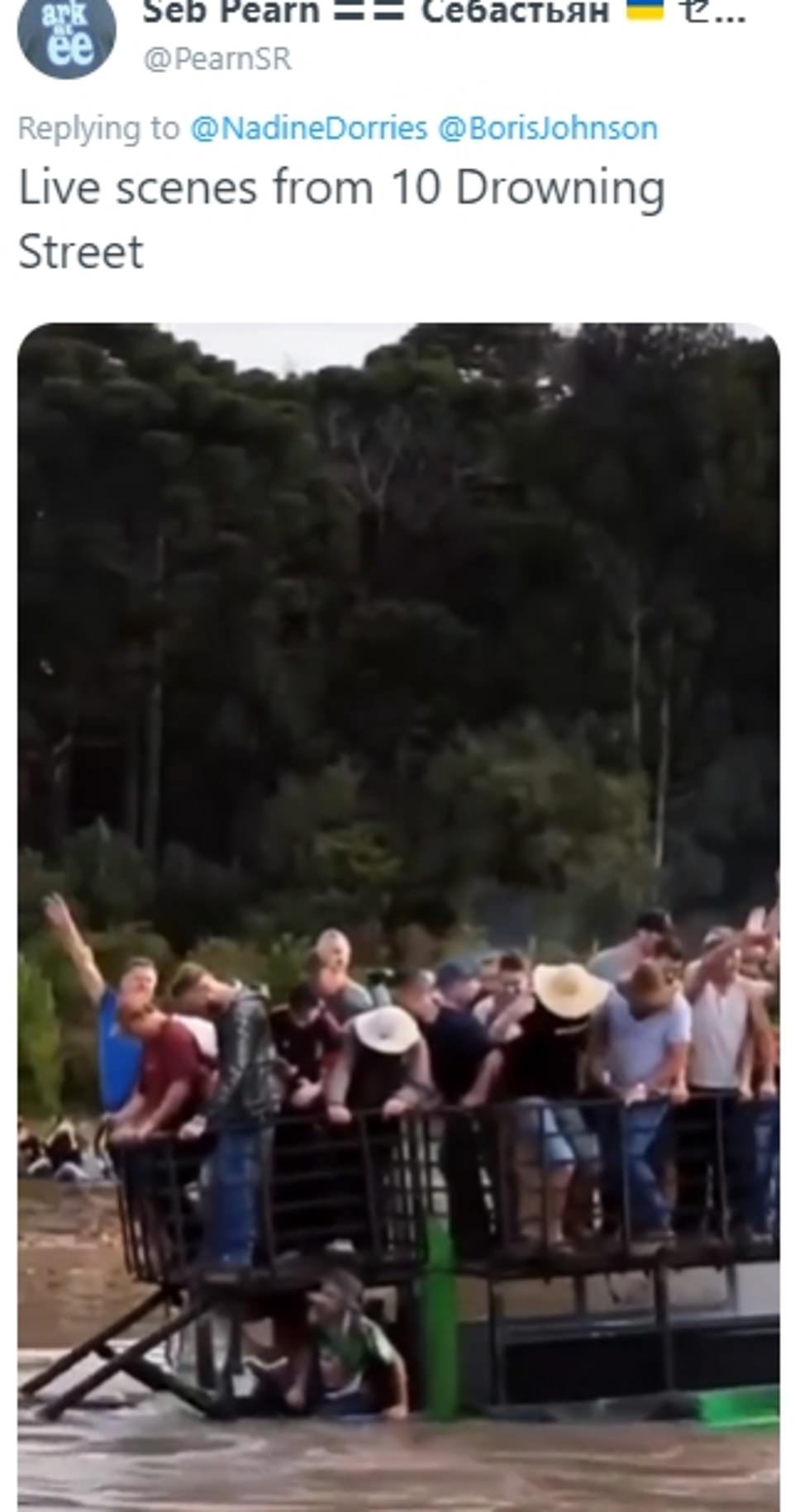 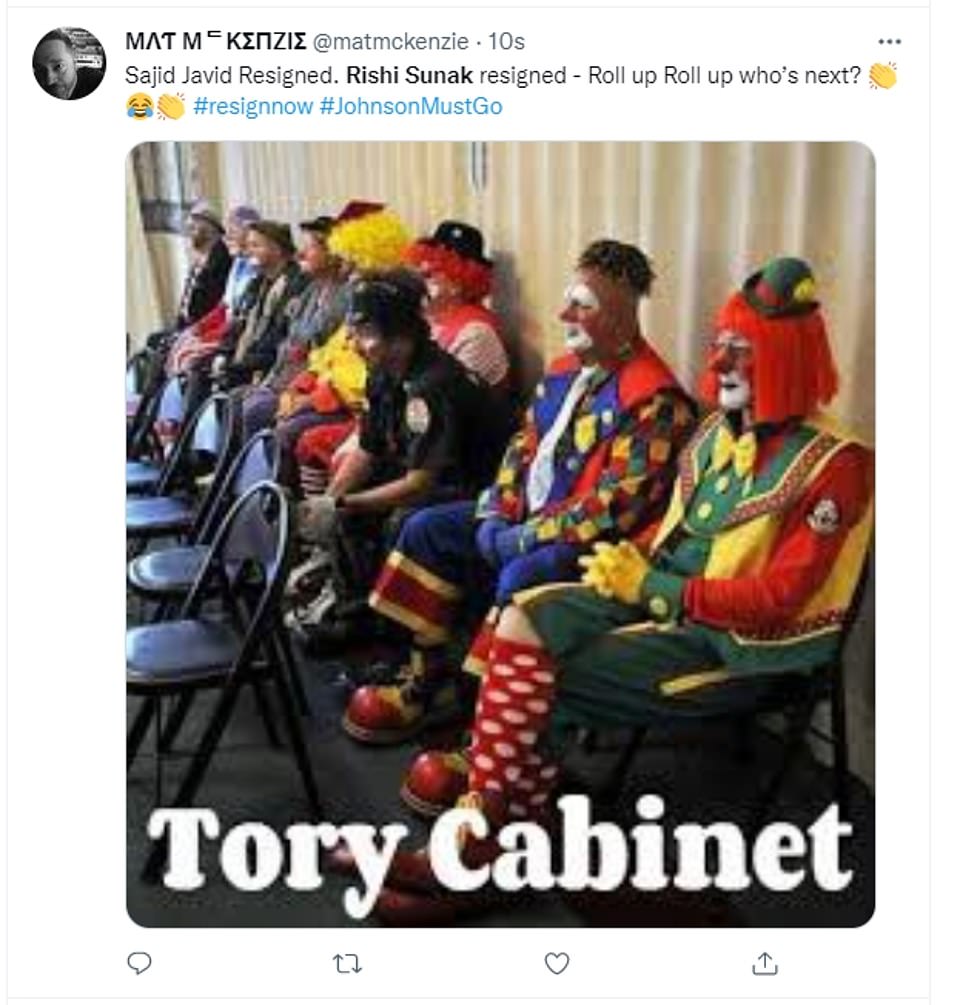 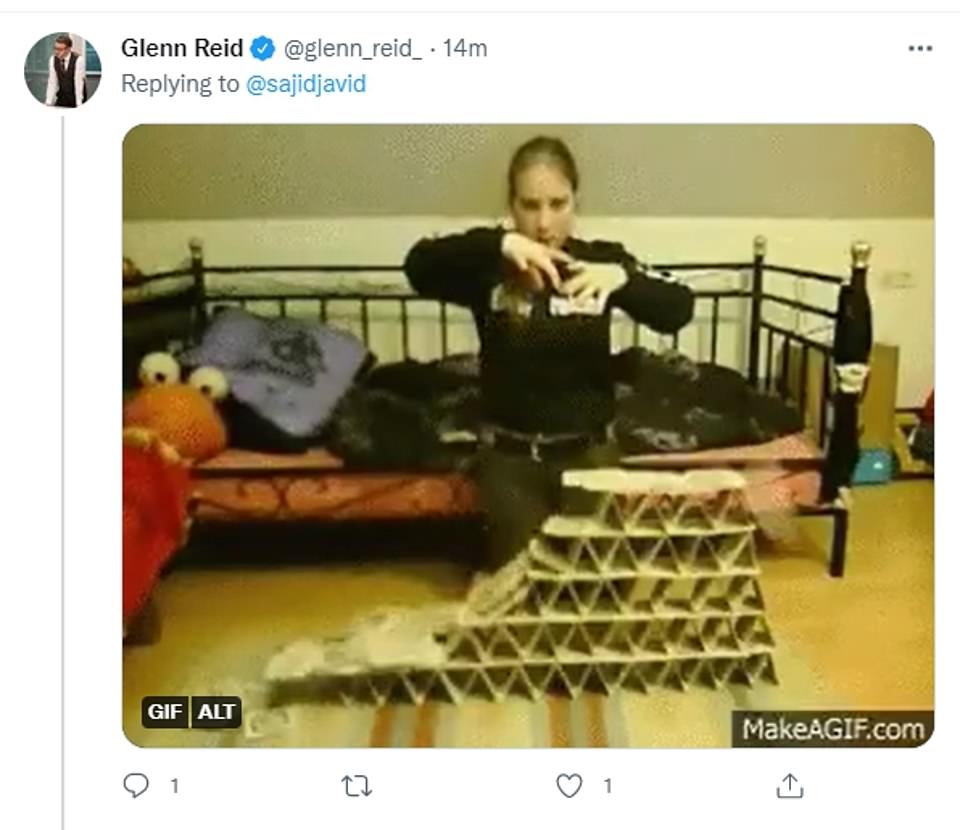 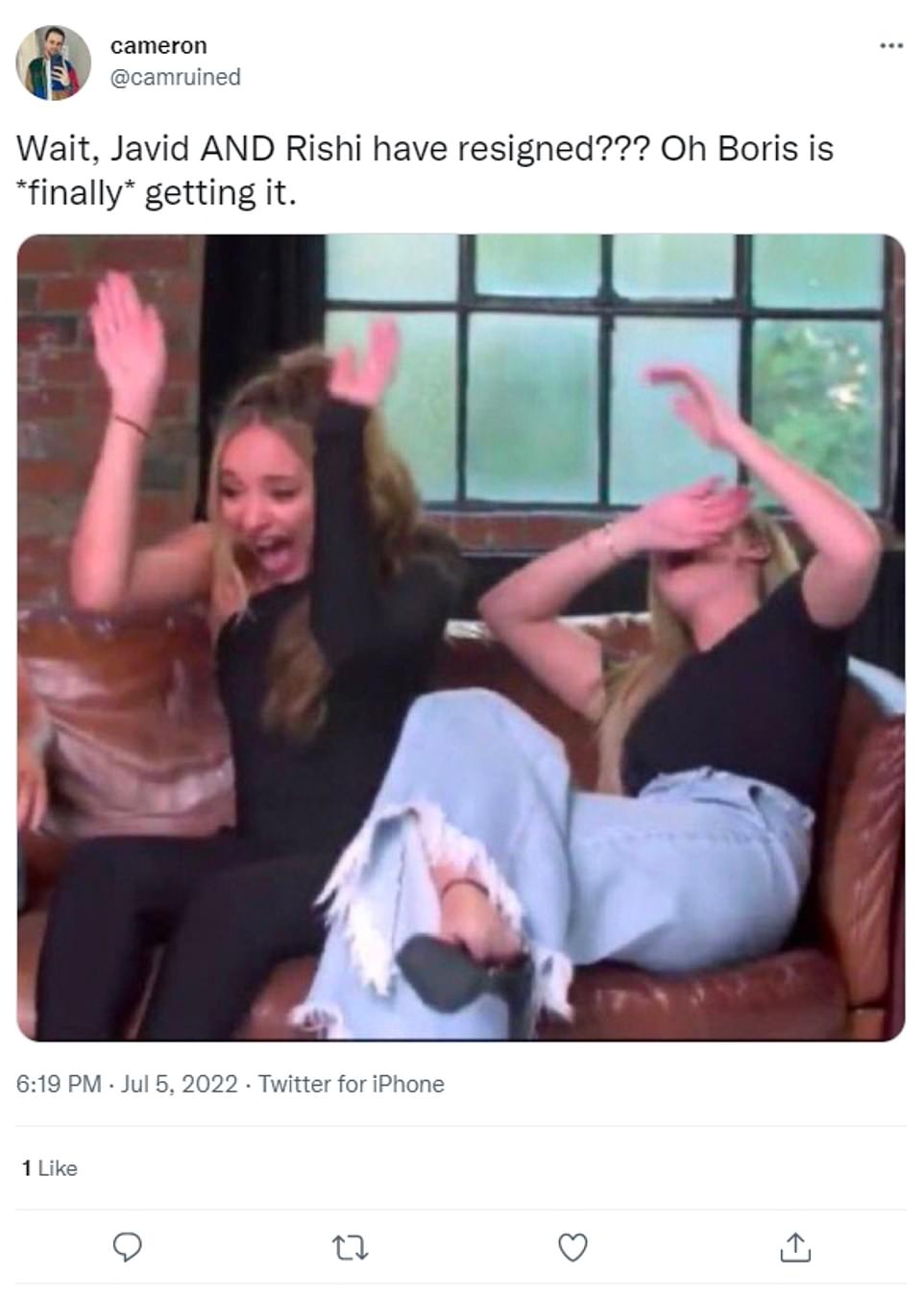 In his resignation letter, Mr Sunak told the PM that ‘we cannot continue like this’.

Acknowledging that he might be waving goodbye to his ministerial career for good, the outgoing Chancellor added: ‘The public rightly expect Government to be conducted properly, competently and seriously.

‘I recognise this may be my last ministerial job, but I believe these standards are worth fighting for and that is why I am resigning.’

He told the PM: ‘It is with enormous regret that I must tell you that I can no longer, in good conscience, continue serving in this Government.

‘I am instinctively a team player but the British people also rightly expect integrity from their Government.’

He has now also been suspended as a Conservative MP, while a slew of further allegations have emerged against the 52-year-old spanning several years.

Critics of Mr Johnson were given further ammunition today when a former senior civil servant penned a bombshell letter to a parliamentary watchdog and claimed No10 ‘keep changing their story and are still not telling the truth’.

Downing Street later confirmed Simon McDonald, the ex-top official at the Foreign Office, was correct to state the PM had been told of a 2019 complaint about Mr Pincher when he was a Foreign Office minister.

He added that he thought the PM was told by ‘someone in the Cabinet Office’ and that had been ‘a number of months’ after the complaint was investigated.

As No10 took its latest position on what the PM knew about Mr Pincher’s alleged behaviour, Cabinet Office minister Michael Ellis faced a Commons grilling over the row.

Fellow Tory MP Caroline Johnson asked why Mr Pincher wasn’t fired as a Foreign Office minister when the 2019 complaint about him was upheld.

‘Why wasn’t he sacked at the time, never mind given another job?,’ she asked.