So what IS the Brexit ‘Plan B’? Nobody seems to want the Prime Minister’s plan but equally nobody can agree on what happens if she loses. Confused? You will be…

Theresa May again vowed to press on with her Brexit plan today, insisting it is the only option on the table that delivers on the result of the EU referendum.

But the PM looks to be on track for a catastrophic defeat, with more than a hundred Tory MPs, the DUP, Labour, the SNP and the Lib Dems all lined up against her.

Minds at Westminster have increasingly been turning to where relations with the EU could end up if Mrs May’s deal falls.

They range from switching to a Norway-style relationship with the bloc, to defying doom-laden warnings and making a clean break.

But the wrangling is set to be fierce, with little sign of a big majority in Parliament for any of the proposed solutions.

There are a few endpoints that seem to be the most likely, but how they are arrived at involves mind-bogglingly complex sequences of events. 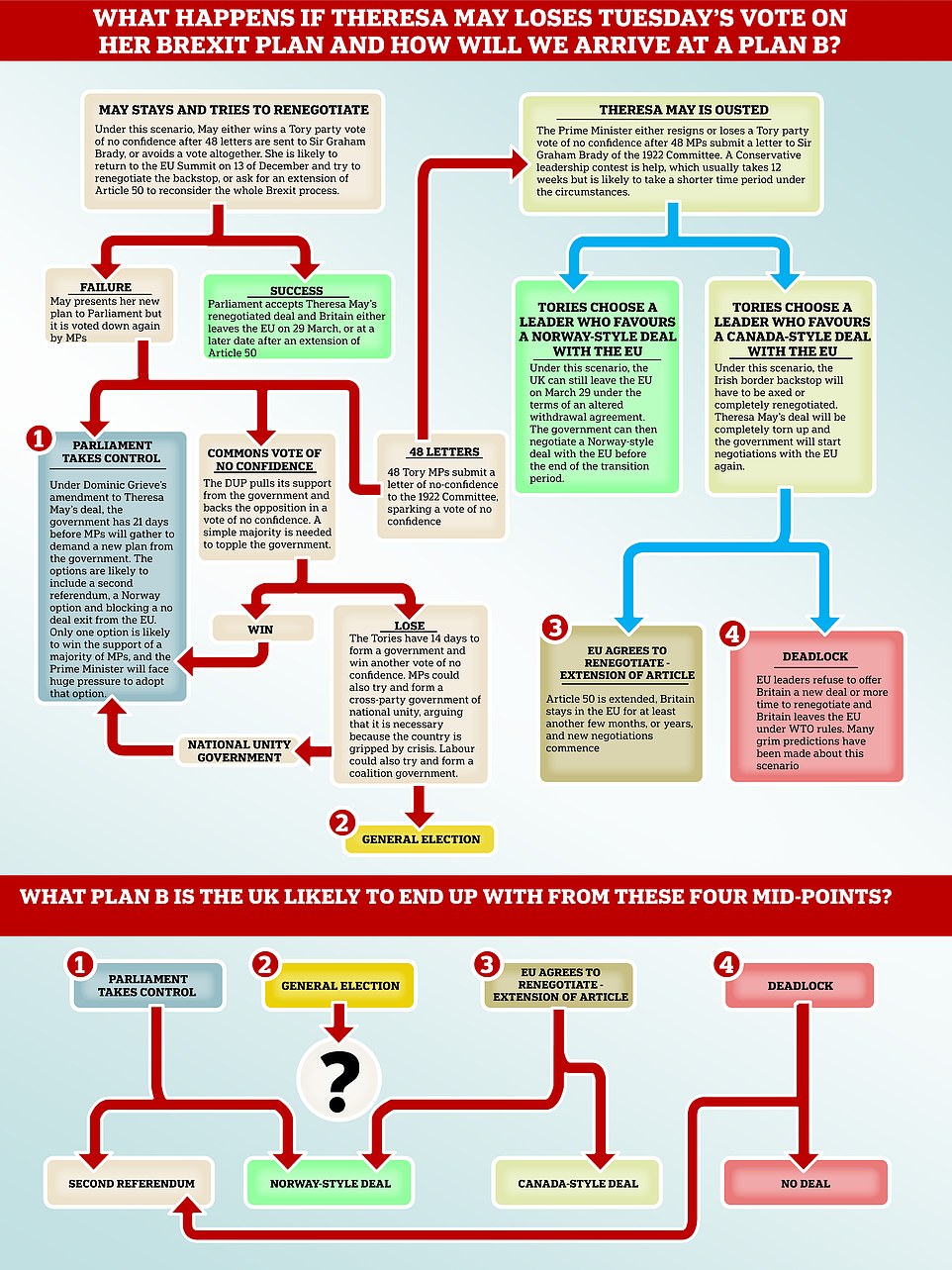 The looming wrangling over Brexit be fierce, with little sign of a big majority in Parliament for any of the proposed solutions

In the wake of a defeat on her deal, Mrs May would have 21 days to bring a new plan to the House of Commons.

But an amendment tabled by Tory Remainer rebel Dominic Greive and passed this week has given parliament a platform to start dictating the terms.

MPs will be able to spell out potential plans and vote on them – giving a strong indication of where opinion lies.

Support is likely to gather around a ‘Norway-plus’ plan that has long been pushed by Tory backbencher Nick Boles.

Former Cabinet ministers Oliver Letwin said this week that he believes there is a majority for that style of relationship, other senior figures such as Nicky Morgan have endorsed it, along with substantial numbers of Labour MPs. A group of Cabinet ministers have been mulling it over as a fallback plan.

It would effectively keep the UK in the single market, with a customs bolt-on to avoid a hard Irish border, and backers say it would keep Britain close to the EU while cutting contributions to Brussels.

However, critics say it has the drawbacks of keeping free movement, – and tightly limiting the possibilities for doing trade deals elsewhere.

The EU is also thought to have concerns about a country the UK’s size joining the EEA, while other states in the group might be resistant.

If the Norway model was endorsed by the Commons, it would not be binding on the government.

But it would have huge political force, and it might be very difficult for ministers to face down the calls.

Mrs May is unlikely to be able to put the policy in place as it break her often-stated red lines.

In the end, it might need a new government of national unity, perhaps led by a respected cross-party figure, to put the UK on course for Norway-plus – with the prospect of a general election soon afterwards.

Government faces down Commons revolt and forces through no deal

Mrs May’s mantra for more than two years was ‘no deal is better than a bad deal’.

And while she appears to have abandoned the claim, many Tory Brexiteers insist the government should stick to its guns.

They point out that, as Article 50 has been invoked and the Withdrawal Act passed, that is the default legal outcome.

The hard Brexiteer argument is that while MPs can pass motions demanding a change in policy, they will not be binding on the government.

Instead they say ministers should simply ignore MPs and try to force through a no-deal outcome.

However, that kind of constitutional standoff could be incredibly difficult to sustain.

The Commons has the nuclear option of passing a no confidence vote in the government and putting the country on course for a general election.

Although Eurosceptics claim, it would only require seven of them to switch sides or a larger number to abstain.

The government also needs to pass legislation to pave the way for the least chaotic possible no deal, and ministers could expect the Commons equivalent of guerrilla warfare to wreck those efforts.

Renegotiate for a Canada-plus deal

If the PM goes down in flames, she – or another Tory PM – could try to go back to the EU and ask for a better deal.

Brexiteers have been demanding the UK takes a different approach this time, seeking a looser Canada-style arrangement with the EU.

The arrangement they want would be a relatively clean break from the EU, with the ability to strike trade agreements elsewhere.

But it would fall far short of the low-friction access urged by Labour and large numbers of Tories.

However, time would be a major obstacle, with just months until Brexit day. The EU has also insisted it will not unpick the divorce package thrashed out in painstaking negotiations.

Mrs May has also pointed out that the Canada model would not solve the Irish border issue, as there would need to be checks between Northern Ireland and the Republic.

Eurosceptics dismiss this problem as confected, saying technology and trusted trade schemes can ensure there is no hard border.

They also say that the EU would be more willing to compromise if it really believes that the UK would go through with a no-deal exit.

Second referendum and UK stays in the EU

With Westminster deadlocked, the possibility of asking the public to think again has strong appeal for many MPs.

The so-called ‘People’s Vote’ campaign has been pushing hard for another national vote, with cross-party backing.

Again, it is difficult to see how Parliament can trigger a referendum itself – but it could heap pressure on the government to the level where one becomes irresistible.

One potential route would be for the Commons to vote no confidence in the government – leaving a caretaker Tory PM with a choice between a referendum and a general election if they lose a second confidence vote.

The Article 50 process would probably need to be extended to facilitate a referendum, but the EU seems open to that possibility.

Furious Brexiteers, including Michael Gove, have warned that Remainers smell an opportunity to reverse the 2016 vote altogether.

He said at the weekend that holding a national vote would ‘rip the fabric of society’ – although he also claimed that Leave would win by more.

Some suggest that a referendum could be fought between the option of Mrs May’s deal and no deal.

However, senior Labour figures appear to have come around to the idea of having Remain on the ballot.

Tony Blair openly says a referendum should be a way of cancelling Brexit, and MPs across parties – such as Mr Grieve – regard it as probably the only sustainable way of overturning the 2016 result and staying in the EU.

If a ruling from the European court next week goes as expected, Article 50 could then simply be revoked – leaving the UK with the same membership terms as now.

Theresa May today vowed to push ahead with the crunch vote on her Brexit deal despite Cabinet ministers urging her to delay it to avoid a catastrophic defeat.

The Prime Minister defied hardening opposition from Tory rebels and the DUP to make another impassioned plea for MPs to get on board with her plan.

She warned there is no other option on the table, and killing her proposal off would either end up with the UK crashing out of the EU – or Brexit not happening at all.

In interview on BBC Radio 4’s Today programme, Mrs May said her fear was that ‘Parliament in some way frustrates Brexit’.

The premier also confirmed that she is looking at ways to sweeten her blueprint for mutinous MPs – suggesting there could be a parliamentary ‘lock’ on the Irish border backstop arrangements coming into force.

Asked repeatedly about calls from senior ministers to put off the Commons showdown on Tuesday, Mrs May said: ‘We are in the middle of five days of debate in Parliament which will lead up to a vote on this issue.’ 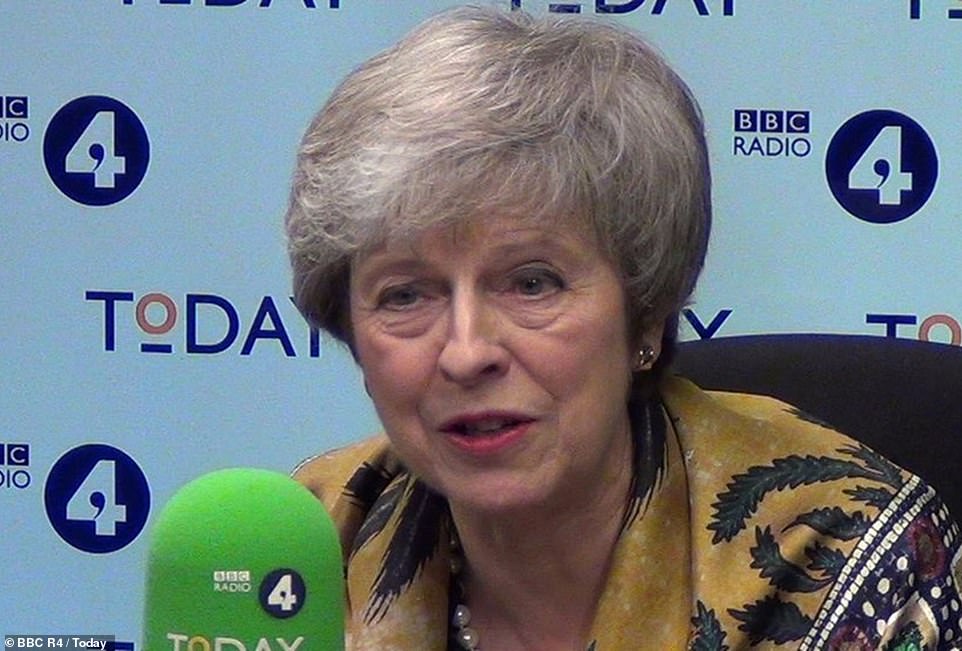 Downing Street said Mrs May was discussing with MPs a ‘greater role’ for Parliament on the next steps as Britain goes through transition.

Pressed what her ‘Plan B’ is for what happens after what looks like an inevitable disaster, she said: ‘That question is for those who want to oppose this deal.’

Mrs May made clear that the Withdrawal Agreement she has thrashed out with Brussels is effectively locked in – but insisted she is ‘listening’ to concerns from MPs.

She confirmed the government is considering a range of measures to make the Irish ‘backstop’ more palatable to her mutinous backbenchers.

Proposals include placing a parliamentary ‘lock’ on the backstop, which would give MPs the final say over whether to enter an arrangement which critics fear could keep the UK trapped in the customs union indefinitely.

‘The backstop is not automatic. I’m looking at the role of Parliament in that choice,’ Mrs May said.

The alternative would be to extend the transition period beyond December 2020 – but the Withdrawal Agreement states that can only last until 2022. After that point the backstop would come into force under the divorce terms.

Parliament will get to vote on whether to extend transition in June 2020 or to enter the backstop – subject to a final agreement with the EU – if trade talks are unfinished.

After the extended transition ends, the backstop will kick in if there is still no final trade deal.

Despite admitting the divorce deal cannot be changed, Mrs May’s spokeswoman said: ‘She’s aware of the strength of feeling and listening to colleagues about how parliament could have a wider say.’