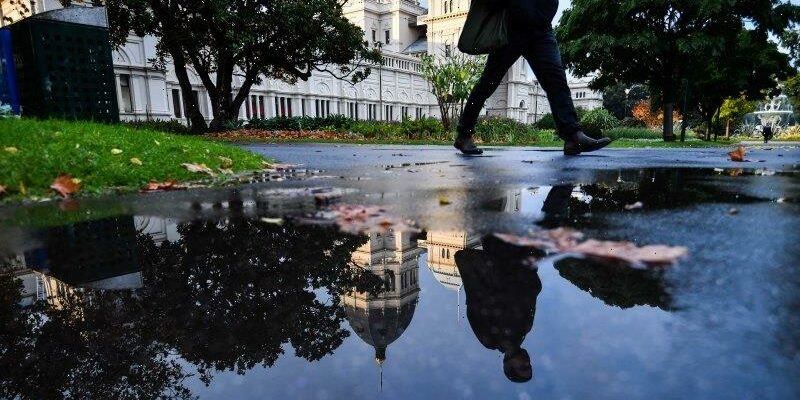 Victoria is shivering through its coldest day of the year, with heavy rainfalls and severe weather warnings for damaging winds plaguing the state’s east.

Around 7.4mm of rain fell over Olympic Park, just outside the Melbourne CBD from midnight on Saturday. At sunrise, the temperature in the city was hovering just over 7 degrees. 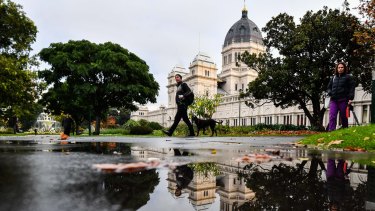 Rain at the Royal Exhibition Building in Carlton Gardens this month.Credit:Joe Armao

Dustings of snow could be seen on Mount Buller, Mount Hotham and at Falls Creek snowcams this morning, with falls down to 700 metres.

A high of 13 degrees is predicted for Melbourne on Saturday, which the Bureau of Meteorology’s duty forecaster Ilana Cherny said is the coldest day of 2021 so far.

“The cold front that passed over Victoria last night and this morning was the most vigorous of this week’s run,” she said.

“With that, we’ve seen some decent shower activity and falls of up to 30mm in parts of West Gippsland.

“We have had these isolated showers this morning, but we’re expecting conditions in Melbourne to ease now.”

A top of 16 degrees is expected on Sunday, with another weaker cold front passing across Victoria and causing rainfall later in the day.

A severe weather warning was issued on Saturday morning for parts of East Gippsland, West Gippsland and South Gippsland.

Damaging winds – with peak gusts up to 100km/h – are possible for the Bass Coast and around the Strzelecki ranges in Victoria’s east.

Gusts of 106km/h were recorded at 3.30am at the South Channel Island weather station, around six kilometres north-east of Sorrento in Port Phillip Bay.

The Bureau of Meteorology said Wonthaggi, Rosebud and Mallacoota would be affected early on Saturday, before significant winds move to far eastern Victoria from mid-morning.