Roy Jones Jr could be persuaded to carry on comeback with Anderson Silva, Bernard Hopkins or Antonio Tarver fights

Leading epidemiologists have praised the Andrews government for the slow and steady approach to guiding Victoria out of the second wave of the coronavirus pandemic, saying the latest easing of restrictions strikes the right balance.

Melburnians are now allowed to visit each other in their homes, marking another step on the road to economic and social recovery following 15 long weeks of lockdown. 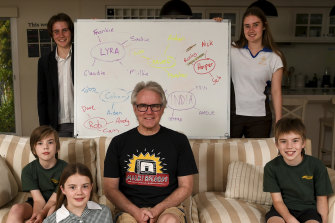 Rob Wallace with his five children and the whiteboard they use to organise their lives.Credit:Penny Stephens

"What we, all of us as Victorians, have built is a precious thing but it is fragile," Premier Daniel Andrews said on Tuesday.

"We want everyone to be vigilant, and understand that … we can't take it for granted."

Victoria recorded no new cases and no deaths for the second day in a row on Tuesday, a milestone Chief Health Officer Brett Sutton dubbed a "double doughnut day".

The last time Victoria notched up two consecutive days with no new coronavirus cases was on March 5 and March 6, when there were 10 confirmed cases in total, all of them returned international travellers. 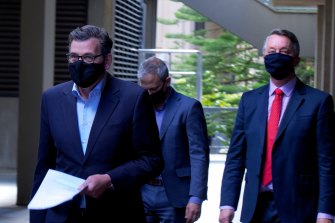 "Arguably your home is the most dangerous place for the spread of this virus," Mr Andrews said.

"I know that jars with people, may not sound right but when you think about it, that's where people let their guard down."

The 25-kilometre limit on travel and the "ring of steel" between metropolitan Melbourne and regional Victoria will remain until at least November 8, when the government is expected to make further announcements.

Asked if Victoria had required such a heavy-handed lockdown to suppress its second wave, Professor Sutton said there had been "no choice".

The rules on visiting

He cited the second wave in South Korea, which did not clamp down as hard but was now struck at dozens of daily cases.

The Burnet Institute's Mike Toole, who at the end of the first wave of the pandemic raised concerns about the speed at which restrictions were lifted, said he was buoyed by the government's current cautious approach.

He said he expected restrictions on household gatherings to ease some more but warned against allowing 20 people to meet at homes, as was allowed after the first wave.

"The hotel quarantine leak alone didn't start the second wave," Professor Toole said. "It was fuelled by the easing of restrictions … there were large family gatherings and we don't want that this time.

"I would expect the government to ease restrictions gradually, maybe from two to five to 10, but I wouldn't like it to get to 20 again."

The institute's chief executive, Brendan Crabb, also welcomed the government's cautious attitude to guiding the state out of coronavirus restrictions, saying authorities were "overconfident" at the end of the first wave.

"We've got an improved system, we're easing cautiously with an eye on getting relevant businesses up and running first and then getting some level of social interaction … but it's a much more wide-eyed and not withstanding 'get on the beers', a sober view," Professor Crabb said.

"No one is under any illusion that we're a bit of bad luck and bad judgment away from trouble.

"By the same token we have to live, we have to get our society going, so that's a really nuanced and tricky balance and I think that's being wrestled really well at the moment."

Tuesday's announcement came as a relief for Northcote father Rob Wallace and his family of seven, who are going to have to use a whiteboard to manage their comings and goings and ensure all of the family get a visit or a visitor.

"I totally get that you can’t just have a free for all," he said. "It’s just about thinking ‘what can we do? We can do this', and that’s good because last week we couldn’t do that."

However, Rachel Bensimon from East Melbourne – who also lives with six other people – said she was frustrated the rules limited the visits to two adults and their dependents,

"It just seems so arbitrary," Ms Bensimon said. "Why are we picking and choosing parts of the family?"

"My 13-year-old, who has been home for months secluded in his room, again I should tell him, 'actually you can’t come with us to visit your grandparents, we’re just going to take the younger ones.'"