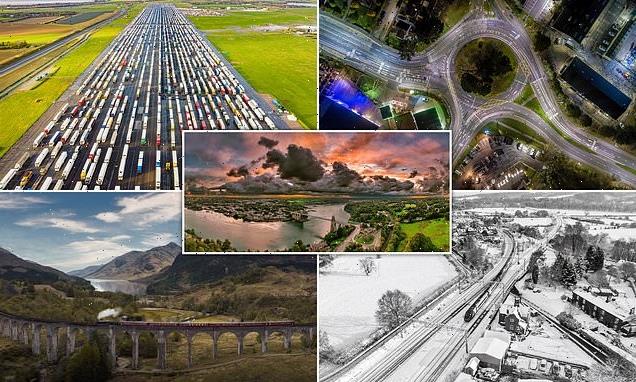 Snow-covered hills, a rainbow mass of striking lorries and Poole roundabout at night are revealed as winners of this year’s #ShotOnMyDrone competition as stunning aerial images of Britain seen from above are set to go on show in London

Hundreds of drone pilots across the UK submitted photographs featuring stunning winter landscapes, urban town centres and coastal vistas as part of a competition run by the Civil Aviation Authority to promote the safe use of drones. across the UK.

Many of the images featured a snowy backdrop while some where shot at night. Others concentrated on landmarks such as the Menai suspension bridge or the Glenfinnan railway viaduct.

The CAA, who are responsible for regulating the skies, want to encourage drone users to fly their aircraft sensibly, without endangering members of the public or civil or commercial aircraft.

Four images out of more than 800 have been selected by an expert panel showing what is possible to achieve while remaining within the regulations.

The overall winning shot was taken by Andy Wells, who flew his drone above a roundabout in Poole at night. The slow shutter speed of the photograph created some special effects of the cars leaving a trail of light while using the roundabout. Whereas the surrounding area, where there was no movement, remained pin sharp. 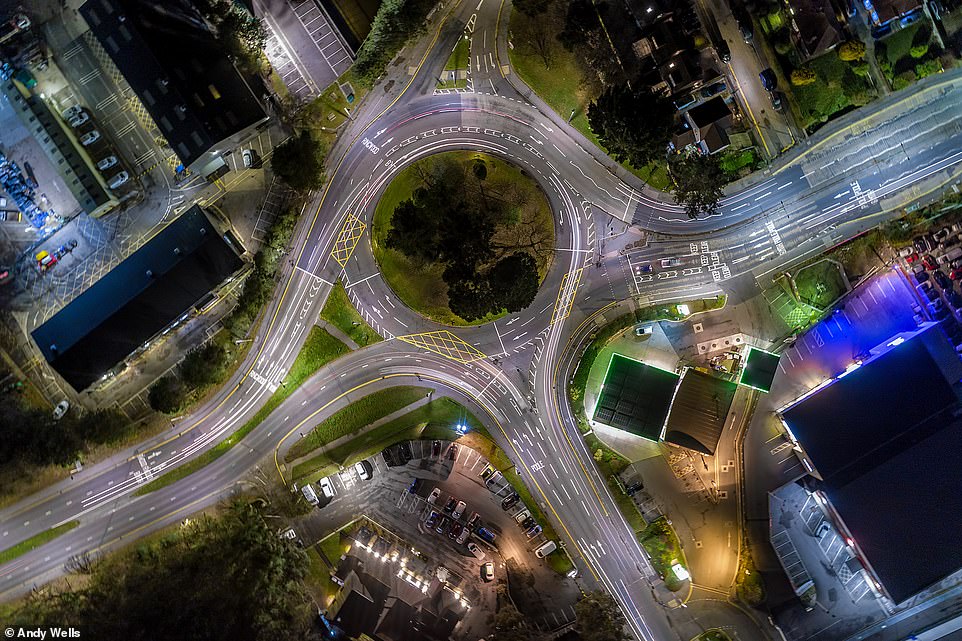 Andy Wells took this photograph of a roundabout in Poole, Dorset at night, showing the dramatic contrast between light and dark areas 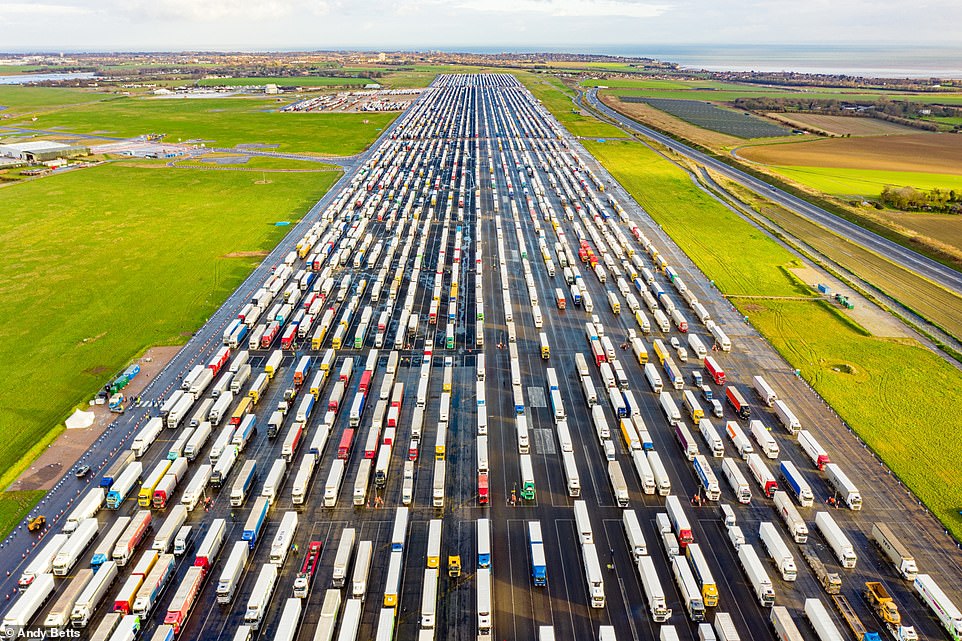 Normally flying a drone at the end of a runway is prohibited, but Manston Airport in Kent was being used as a massive lorry park. Andy Betts captured this image of the trucks being held before they can make their way to Dover 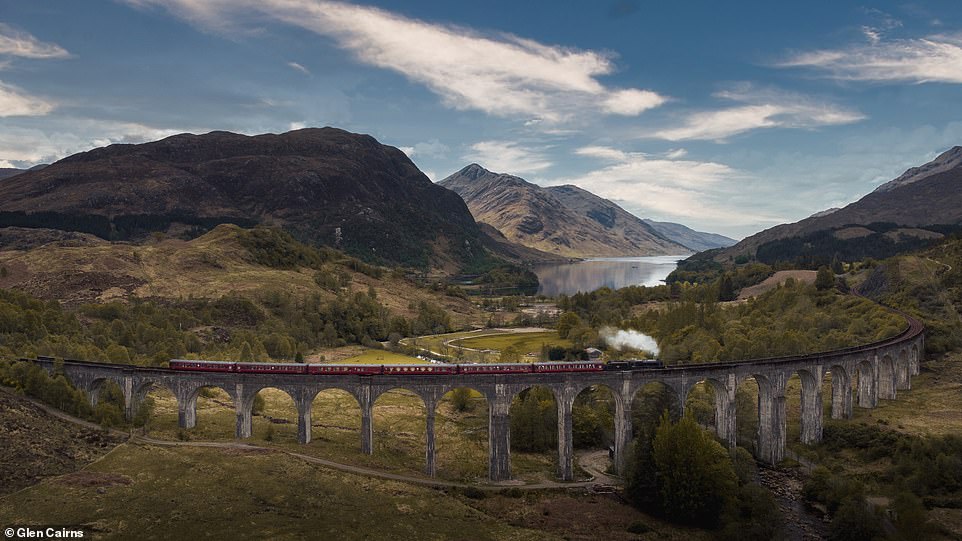 Glen Cairns was in position with his drone when a steam train crossed over the Glenfinnan railway viaduct. He placed his drone far enough away from the viaduct so it was captured in its entirety and with enough elevation to see Loch Shiel in the background. This image won the best rural photograph 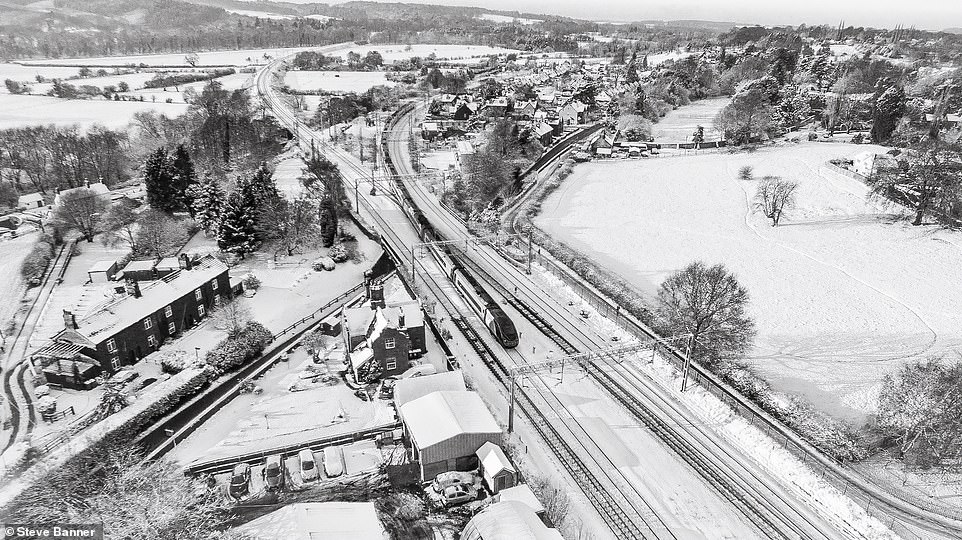 Steve Banner’s image of Little Haywood, Staffordshire from December whos a train contrasting against the snowy background. It won the best festive photograph 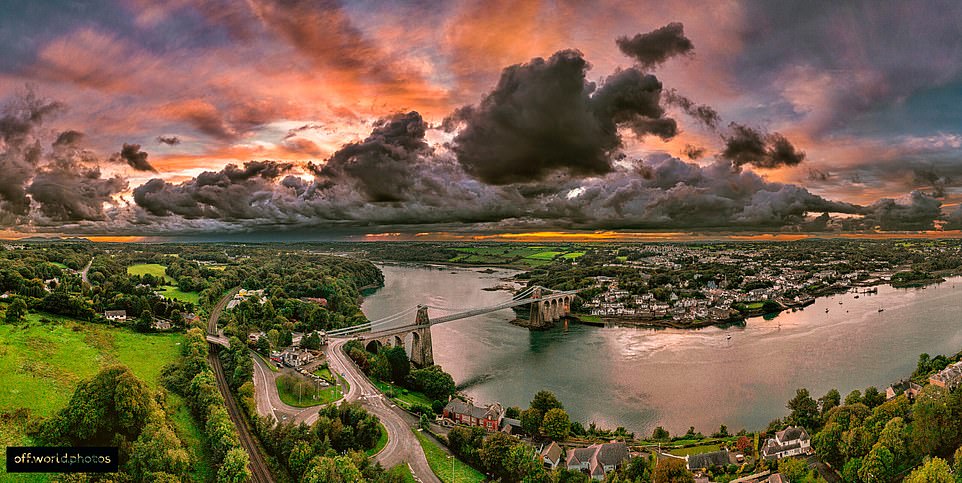 Matt Hoyland flew his drone over the  Menai Strait, North Wales, looking west over the Menai Suspension Bridge over to Anglesea and the Irish Sea showing some menacing looking clouds in the background. This image was selected by members of the NATS, the UK’s main air traffic control provider. It will be displayed at several of their key locations

All of the images were taken at altitudes less than 400ft, which is the maximum limit for drones without seeking prior permission from the CAA.

Sir Stephen Hillier, Civil Aviation Authority Chair, said: ‘We’ve had over 800 entries and I’ve been absolutely amazed at the high standards that we have seen. All of the submissions, particularly those of our four winners, show what can be achieved with this incredible technology. It is also really important for the Civil Aviation Authority to sponsor a competition like this because it helps encourage responsible drone usage, while helping to ensure that drones are properly integrated in our airspace.’

Jonathan Nicholson, Assistant Director of Communications at the UK Civil Aviation Authority, said: ‘We’ve been really impressed by the stunning images submitted to the #ShotOnMyDrone competition. It shows the incredible enthusiasm and engagement from the community. As an exciting way to take pictures and explore the UK, we know that the number of drone users will continue to increase. Of course, as this community grows, it’s key is that we continue to make sure that users comply with our Dronecode, wherever they may be flying, to share our airspace safely.’ 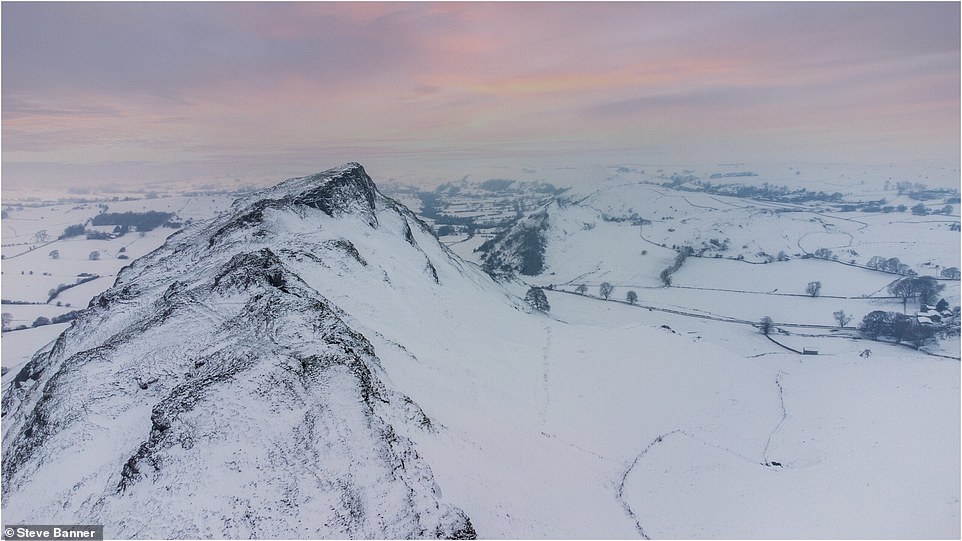 This image was captured by Steve Banner, who won the prize for the best festive photograph 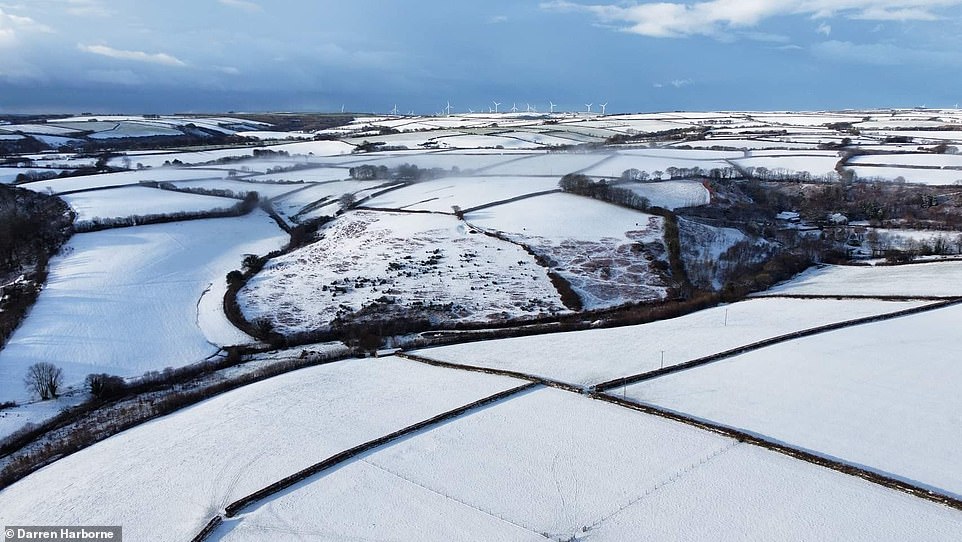 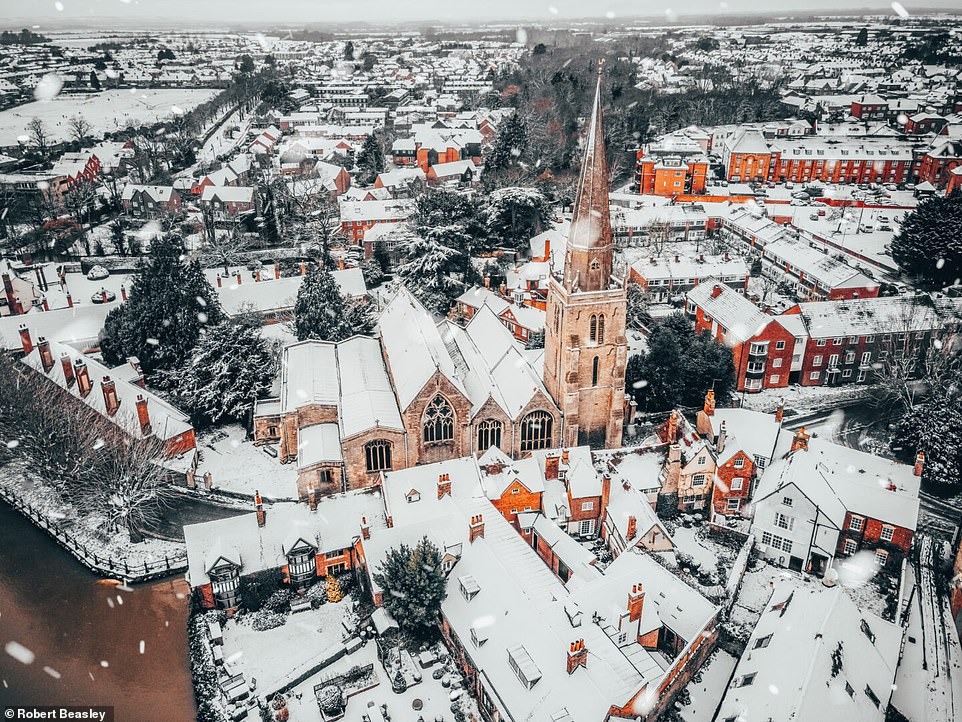 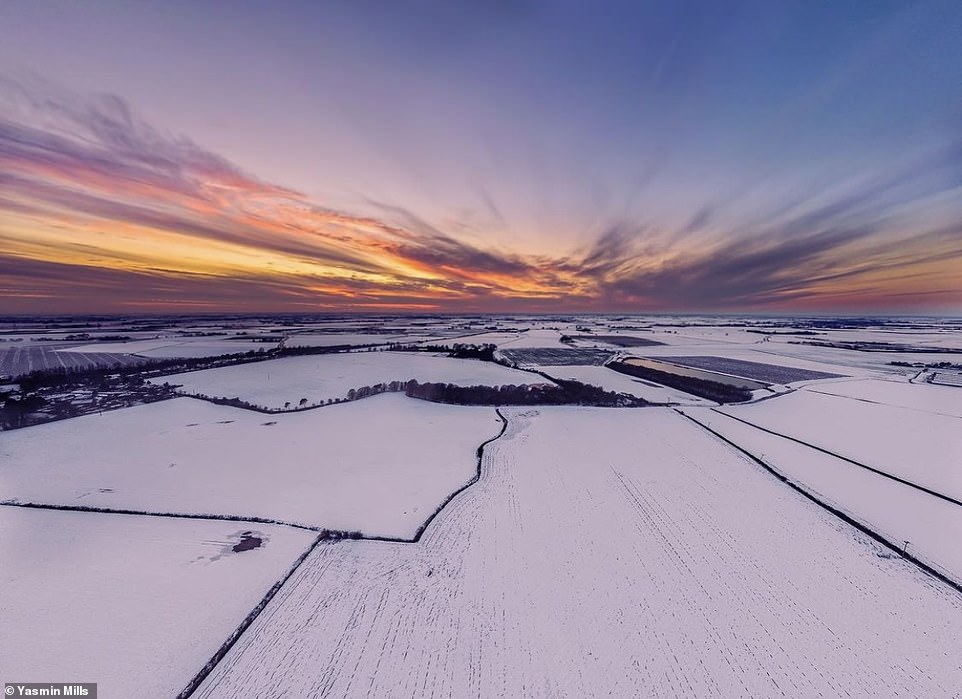 This image shows the magnificent evening sky above the snowy fields. It was taken by Yasnin Mills and was one of the 800 images submitted for the competition 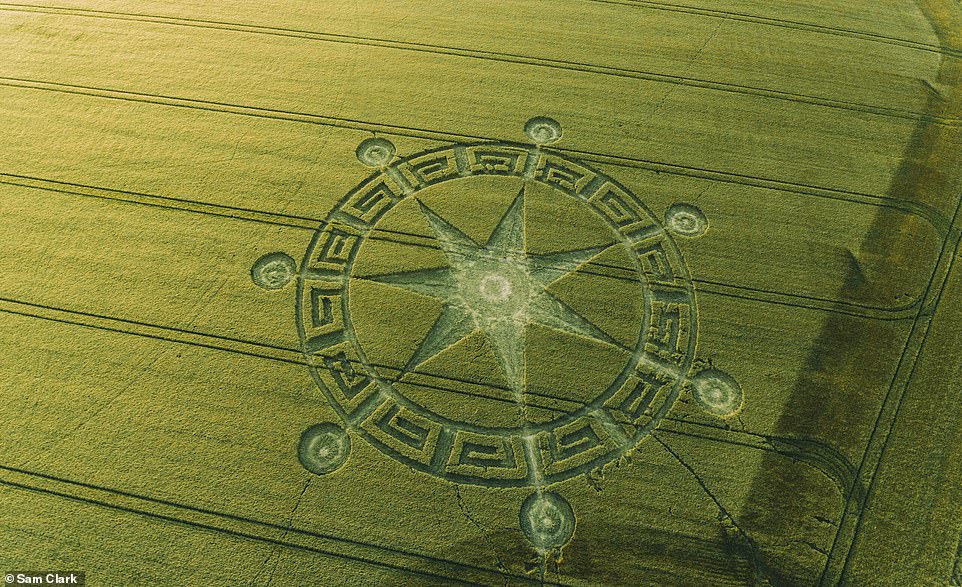 Same Clark took this photograph of an unusual marking in some crops. 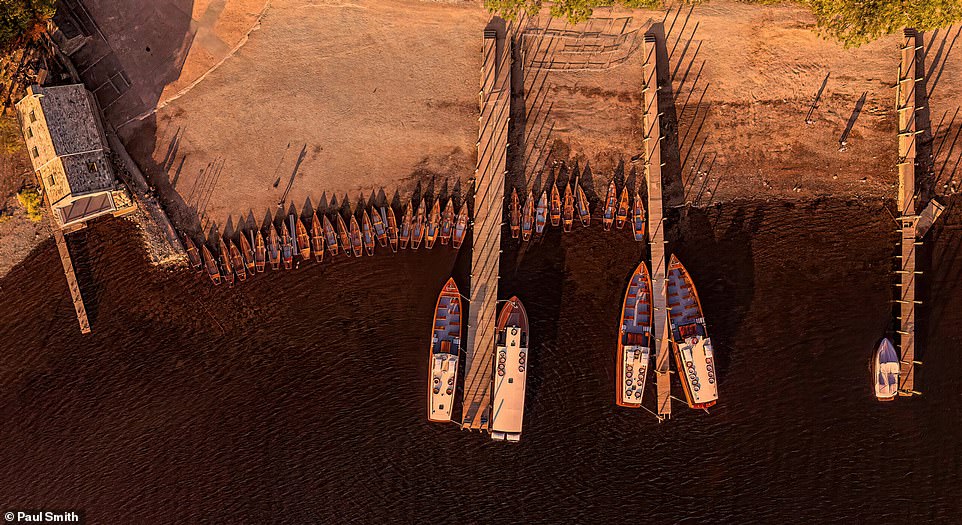 Paul Smith, pictured, placed his drone above the jetty and captured the long shadows from the low sun 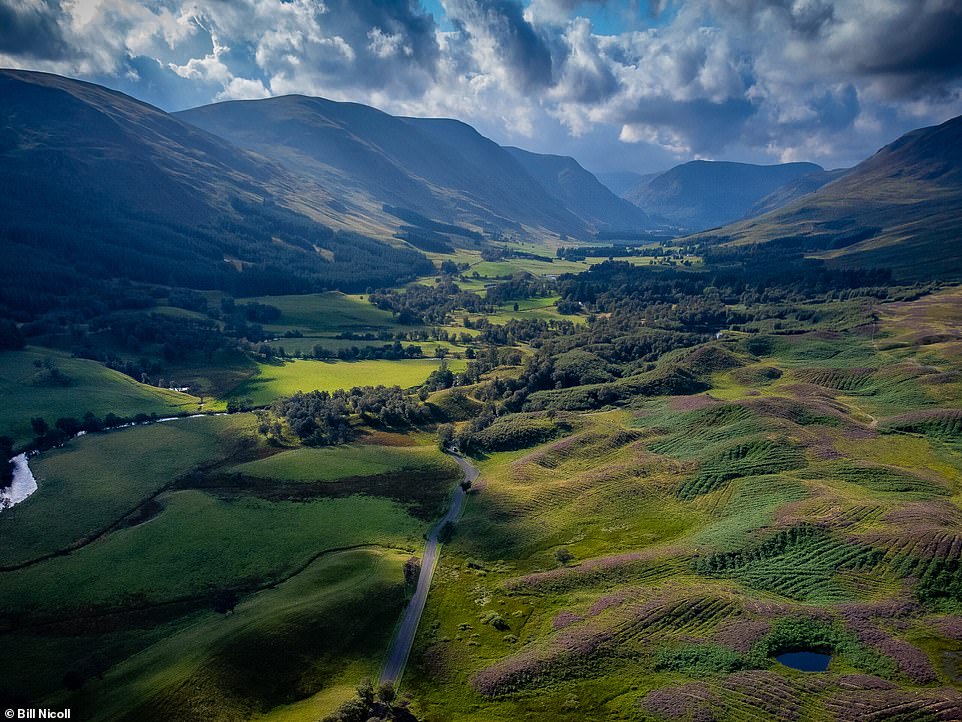 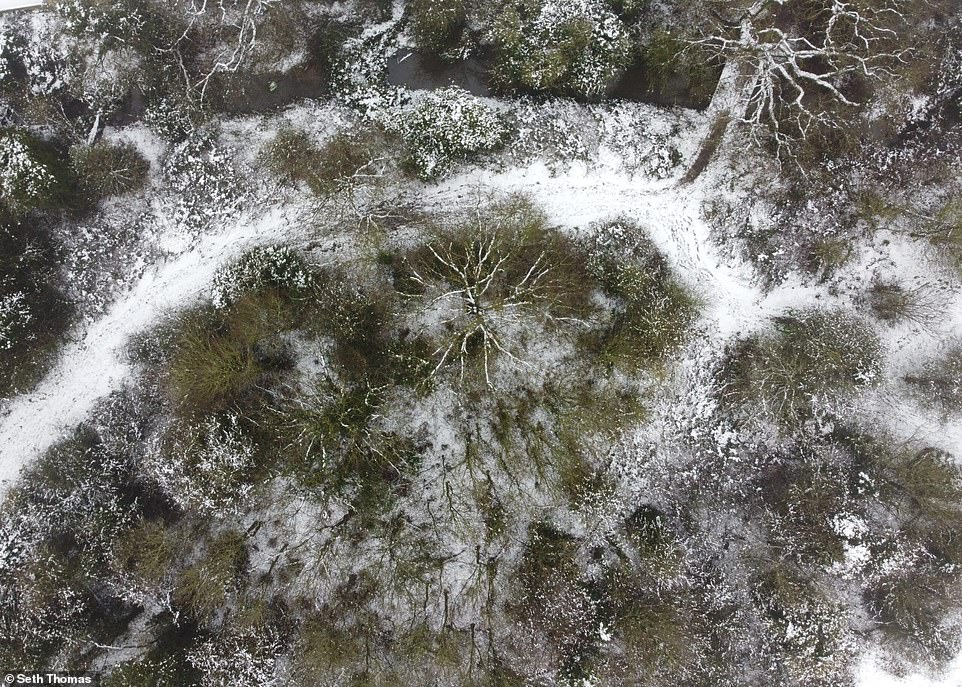 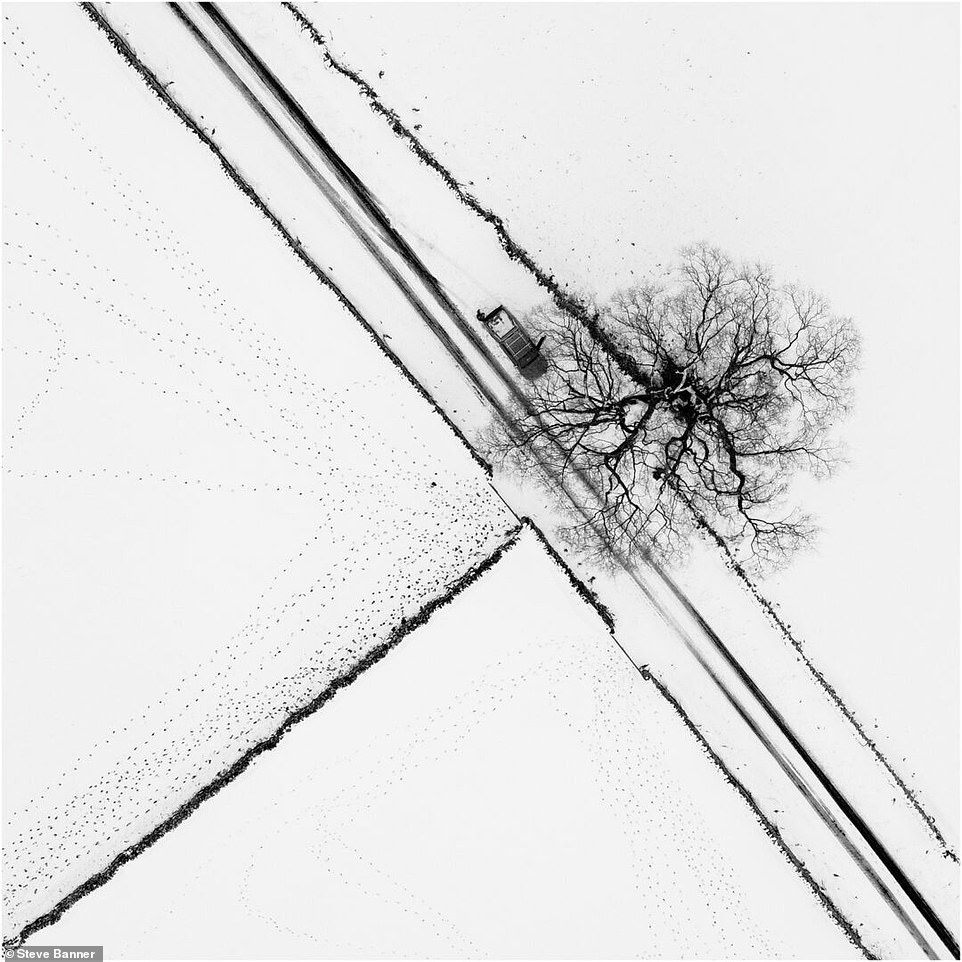