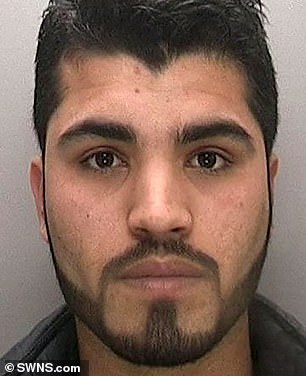 Chilling CCTV footage shows a lying killer threaten his ex-partner and her mother hours before he murdered them both.

Tarin had been married to Ms Oudeh under Islamic law but their relationship broke down after his lies about his secret family in the Middle East emerged.

On the night of their deaths the mother and daughter were on a night out at a local shisha bar when a jilted Tarin turned up.

He is caught on camera hurling abuse at the pair and issuing a chilling threat of: ‘If you leave me, I will kill you and your family.’

At a plea hearing at Birmingham Crown Court, police told of how Tarin went to ‘hunt down’ Ms Oudeh weeks after she found out he had a secret wife, three children, and another on the way in Afghanistan.

Tragically just a few hours after the shisha bar altercation, Ms Oudeh, a mother-of-one, was on the phone to police when she was stabbed.

Mrs Saleem attempted to save her daughter from the onslaught, but she too was fatally stabbed by Tarin – who fled the scene before officers arrived.

Police then launched a manhunt and offered a £5,000 reward to anyone who could help find the killer – and he was cornered by police in the Sparkhill area of Birmingham three days after the murder. 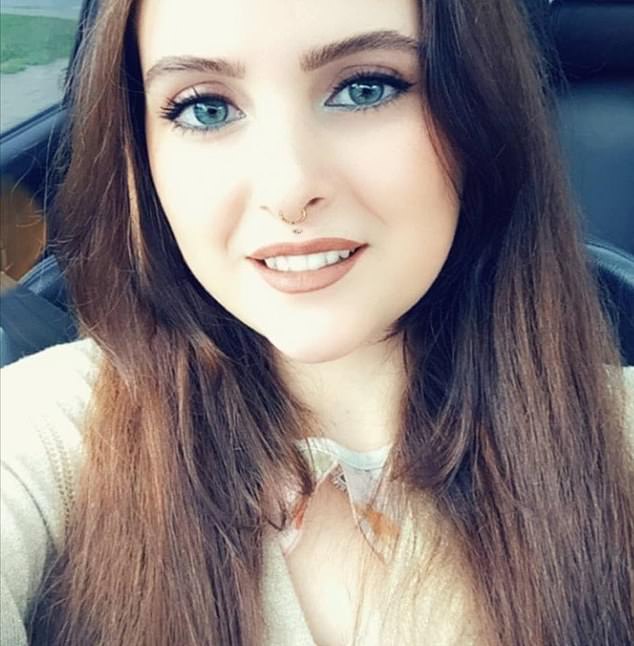 Victim: The body of Raneem Oudeh, 22, was found alongside her mothers in Solihull on August 27 this year

Ms Oudeh’s Aunt Nour Norris told the court the couple had split long before the killing.

She said: ‘He used to threaten her many times ‘if you leave me, I will kill you and your family’.

‘Unfortunately she only told us that at the end because she knew, she couldn’t cope with him anymore with all the violence he was giving her and she knew that the police and authority and everybody wasn’t really helping her so she felt like she could say those things.

‘One day she said to me, Auntie, I feel my life’s going to end. I said ‘don’t say that’. That was few weeks before she was murdered.’

The hearing was told how a jilted Tarin, who met Ms Oudeh at Solihull College after she arrived in the UK from Syria, had also lied to her about his age.

Ms Oudeh broke things off, but he continued to harass her, sleeping outside her mother’s house for 12 consecutive nights.

The court heard how Ms Oudeh had secured a non-molestation order against him after he smashed her phone in one incident on August 10.

But he flouted the ban and in the hours leading up to the assault Ms Oudeh made three calls to police. 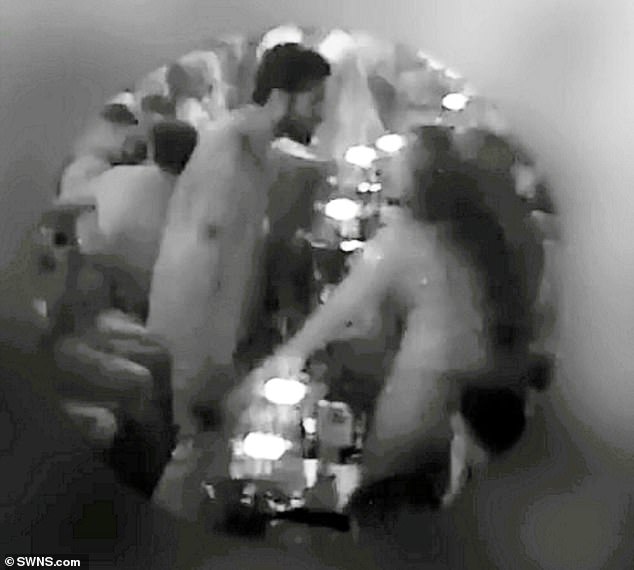 Hours before the double murder, Tarin went to the shisha bar where his ex-partner and her mother were enjoying a night out. A still shows him threatening her 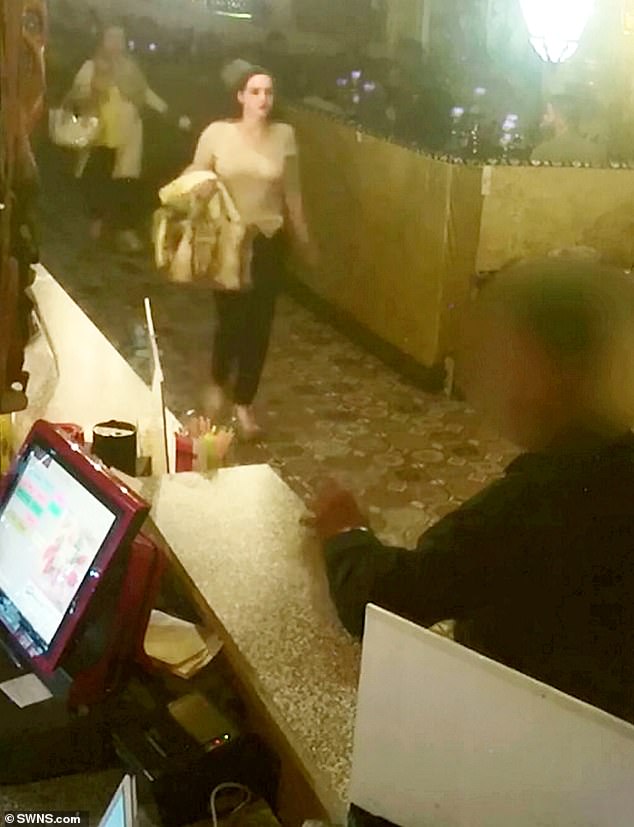 Ms Oudeh is captured on CCTV footage walking out of a shisha bar after Tarin crashed her and her mother’s night out, threatening: ‘If you leave me, I will kill you and your family.’

Her 39-year-old aunt said: ‘After a few months marriage to him, she decided he’s not the right man for her.’

Trapped in the marriage, Ms Oudeh kept a brave face on her relationship, hiding the abuse from relatives, she said.

Mrs Norris added: ‘After she got married to him, she realised he was a good liar.

She continued: ‘He was removed from the college because of Raneem, because she realised he’s got a family abroad and he’s lied to her.

‘I think after a while he tried to get close to her, as in ‘I want to marry you’ and when she realised his age – that he’s married and got kids abroad – she didn’t want that relationship.’ 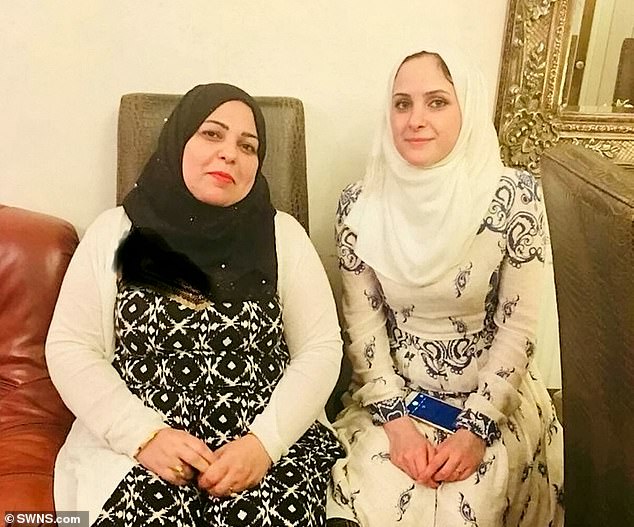 Victims: The bodies of Raneem Oudeh (pictured right) and her mother Khaola Saleem (left) were found in Solihull in the early hours of August 30

Mrs Norris said: ‘When she realised she’s made a big mistake she felt she can’t go back, because he’s very strong. But she didn’t tell us.’

She added: ‘We understood she was trying to protect us, because he was trying to frighten her by saying ‘if you leave, I have your family, all under my finger’ as in he’s threatening her with her family.’

Eventually, Mrs Saleem told her daughter ‘we’re going to do the right thing, go to the court, get a court order’, according to Mrs Norris.

‘That’s exactly what my sister did, the right thing,’ she added.

‘What any mother would do. She tried to protect her by doing the right thing.’

She added: ‘They felt very strong after they had the court order, but unfortunately it wasn’t enough to save their lives.’

Asked if she believed the police and authorities had failed to do enough that night to stop Tarin, and in the months beforehand to protect the victim, Mrs Norris replied: ‘Yes we do.’ 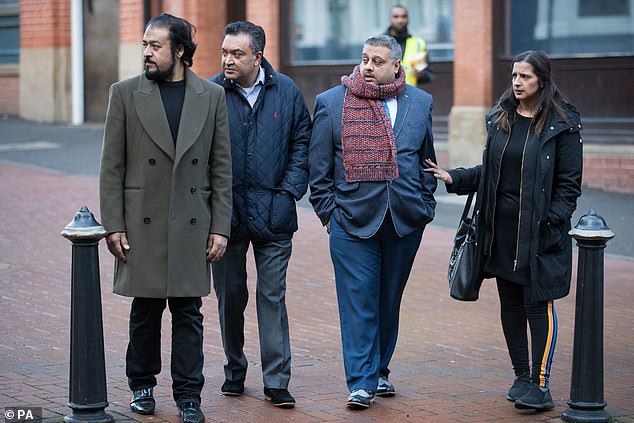 ‘We do feel that and we feel there’s a lot of women out there as well probably going through the same thing, who agree with us.’

After the attack, Tarin fled in his white van and remained on the run for three days until a member of the public spotted him and tipped off police.

Mrs Norris said: ‘That last call, the police were on the phone so they knew she was getting harmed but we couldn’t believe they couldn’t locate him straight away.

‘Because they knew about it there and then so that was one of the things that made us feel more unhappy, more sad, more let down by the authorities.’

The couple met at Solihull College, when she first arrived from Syria.

Mrs Norris said: ‘Her mum has been here for 16 years, and because of the war in Syria, Raneem came to reunite with her family, and they were very happy,

‘She was very happy, excited, I remembered taking her down to college and introducing her.

‘She was very happy to be there, be with her mum, start a new life, away from it all.

‘And here he was, sitting in the classroom, pretending (about) his age – he’s much older.

‘She is very pretty and she’s got the joy and love of the world, so when you see her you have to love her – but no one deserved to be loved in that way.’

The Independent Office of Police Conduct is investigating the circumstances surrounding the police response to the murders, after a self-referral by West Midlands Police.