Revealed – the damage a drone could cause: Shocking test footage shows a small craft bursting a grapefruit-sized hole into an airliner’s wing threatening its FUEL TANKS

This shocking footage shows the potential danger posed by a small drone if it crashes into a passenger jet by puncturing a hole in the aircraft’s wing.

Experts from the University of Dayton Research Institute’s Impact Physics lab simulated a collision between a drone and an aircraft wing under test conditions.

The footage shows the drone punch through the outer skin of the aircraft’s wing as it disintegrates. 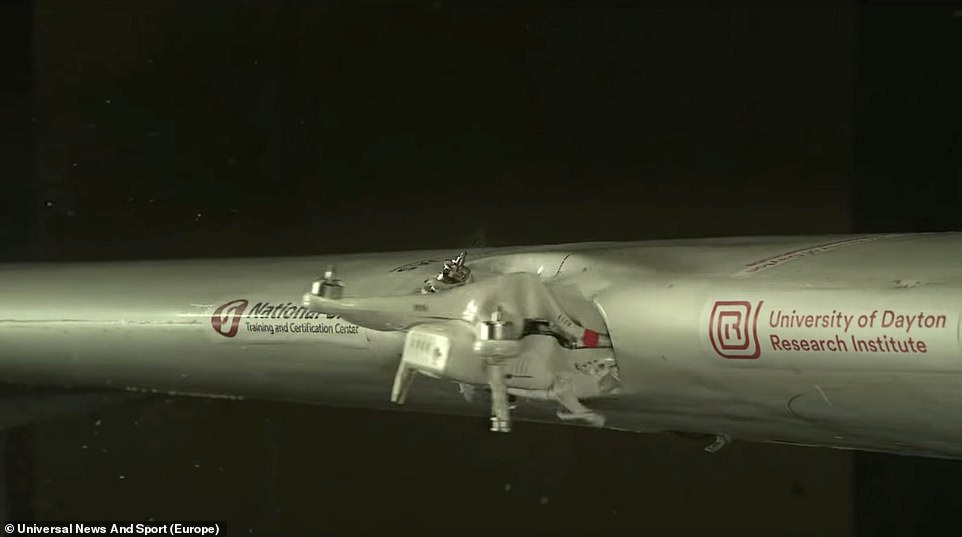 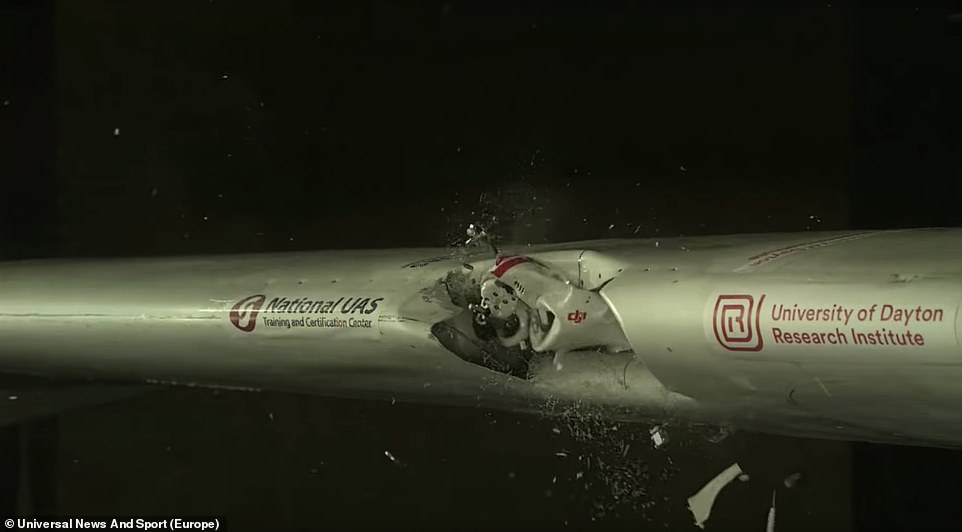 The footage showed the drone breaks up on impact put it punctures a hole in the aircraft’s outer skin, pictured 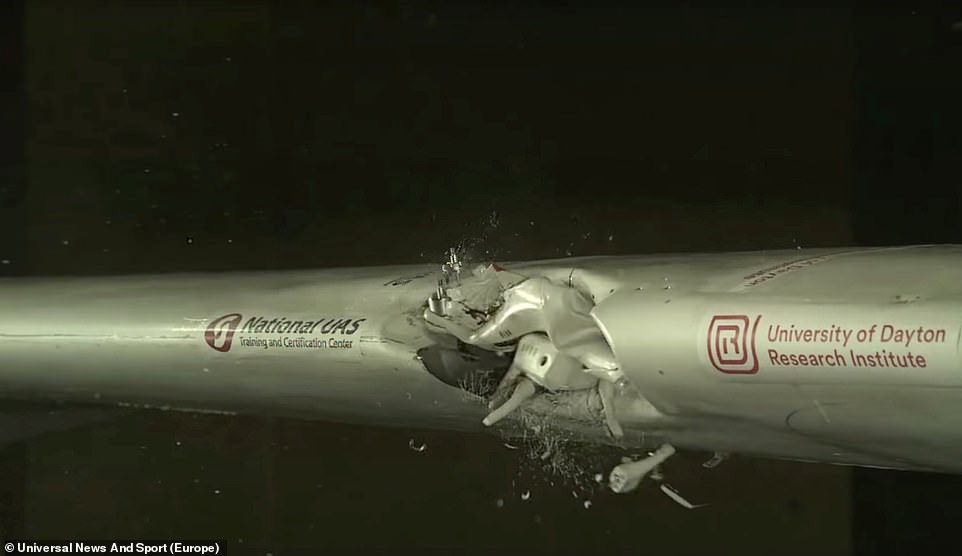 Such an impact on take off or landing could potentially lead to serious control issues endangering the safety of the aircraft and those on the ground.

The drone appears to punch a grapefruit-sized hole into the wing – into an area many aircraft use to carry part of their fuel supply.

Officials at Gatwick Airport shut their runway around 9pm on Wednesday after they received reports of at least two drones operating in the area of the aerodrome.

They immediately suspended flight operations disrupting the travel plans of more than 100,000 people.

Police and army units are currently searching for the rogue drone operators as Gatwick has warned passengers against travelling to the airport tomorrow, which is one of the busiest travel days of the year.

Defence Secretary Gavin Williamson announced the military have been brought in to assist police in finding the drones.

He wrote on Twitter: ‘The armed forces have a range of unique capabilities and this isn’t something we would usually deploy but we are there to assist and do everything we can so that they are in a position to open the airport at the earliest opportunity.’

The number of near-misses involving drones and manned aircraft have increased dramatically over the past three years.

The UK’s Airprox Board which monitors air safety incidents said in 2014 there were six reports rising to 120 reports so far this year – not including the Gatwick incident.

A drone hit a small charter plane in Canada in 2017; it landed safely. In another incident that same year, a drone struck a U.S. Army helicopter in New York but caused only minor damage.

Airline pilot Patrick Smith of askthepilot.com said: ‘This has gone from being what a few years ago what we would have called an emerging threat to a more active threat. 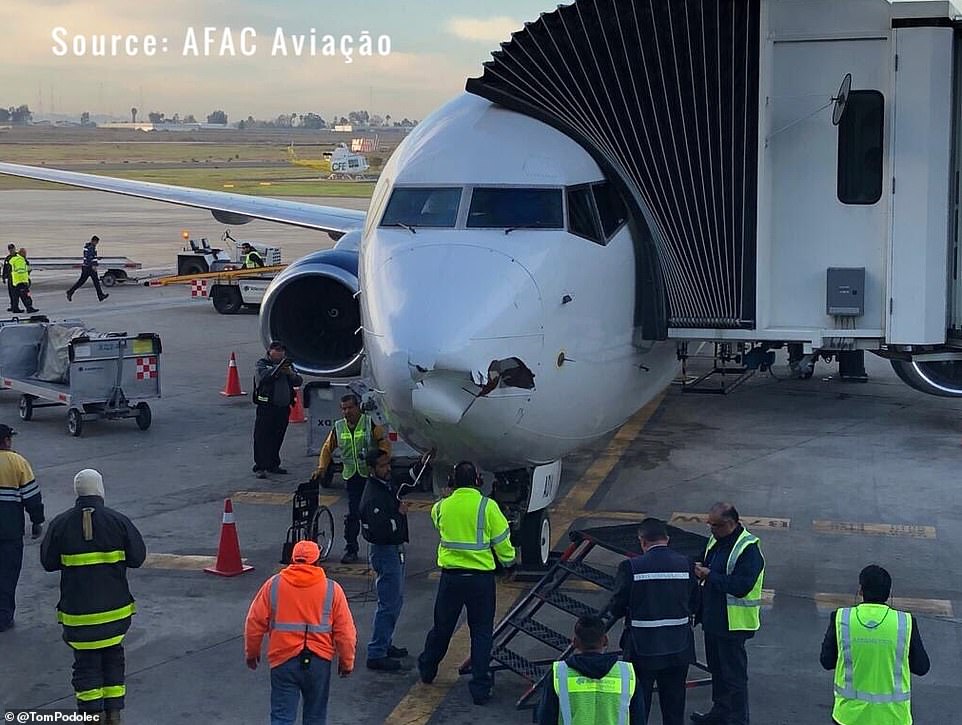 A Boeing 737-800, pictured, suffered damage to its nose on approach to Tijuana airport in December 2018 from a drone 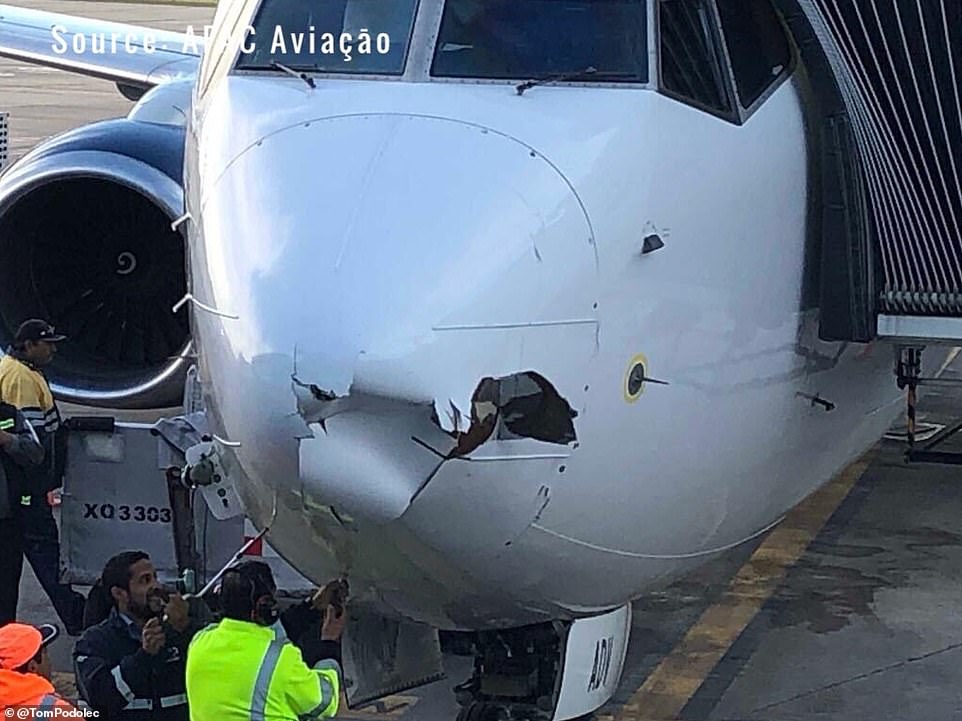 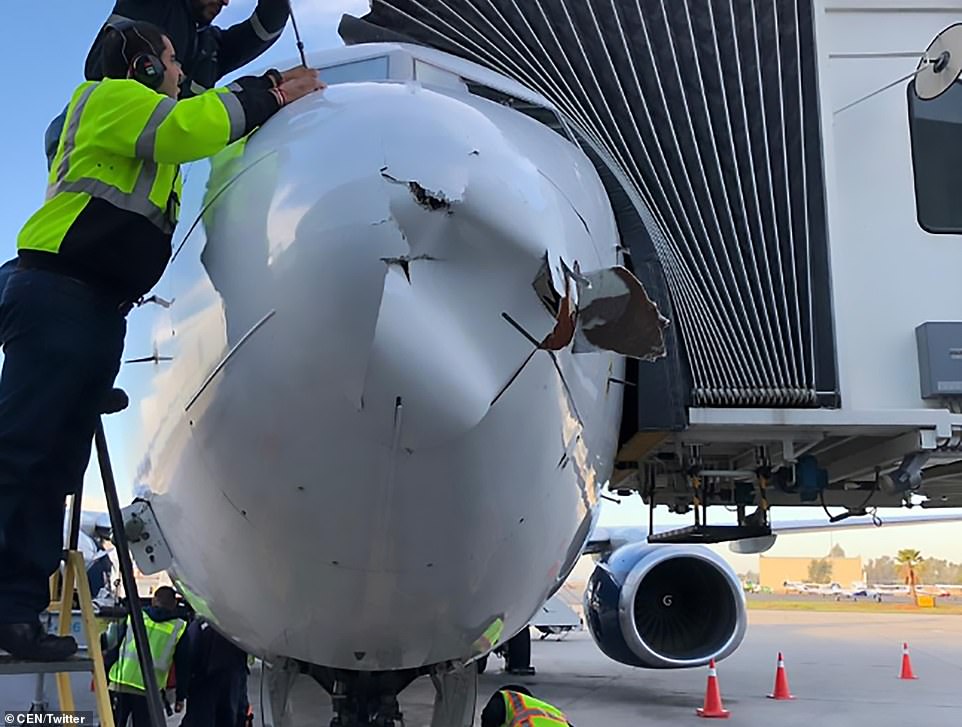 ‘The hardware is getting bigger and heavier and potentially more lethal, and so we need a way to control how these devices are used and under what rules.’

John Cox, former airline pilot and now a safety consultant warned drones posed a greater threat to smaller aircraft and helicopters but could cause problems with a passenger jet.

In a small aircraft the drone could smash through the windscreen into the pilot’s face. It could also be sucked into an aircraft’s engine or damage the rotor of a helicopter.

Mr Cox said: ‘On an airliner, because of the thickness of the glass, I think it’s pretty unlikely, unless it’s a very large drone.’

A study by the US Federal Aviation Authority warned drones posed a greater risk than birds to aircraft as the drones carried batteries and motors which could cause more damage than a bird’s bones.

Marc Wagner, CEO of Drone Detection Sys in Switzerland said jamming systems could disrupt a drone, but such technology is illegal in Britain.

He said Dutch police trained eagles to swoop down on drones and knock them out of the sky near aerodromes or large concerts, but the program was ended as the birds did not always follow orders.

According to Wagner: ‘The only method is to find the pilot and to send someone to the pilot to stop him.’

British authorities are planning to tighten regulations by requiring drone users to register, which could make it easier to identify the pilot.

But Wagner warned: ‘If somebody wants to do something really bad, he will never register.’