A 30-year-old Chinese man has been left in shock after discovering that his liver was full of parasite eggs.

Doctors claimed that the eggs came from blood flukes, which had lived in his body for more than 10 years.

They suspected the parasitic flatworms, which inhabit the human blood vessels, had entered the patient while he was swimming in a contaminated river in his late teens. 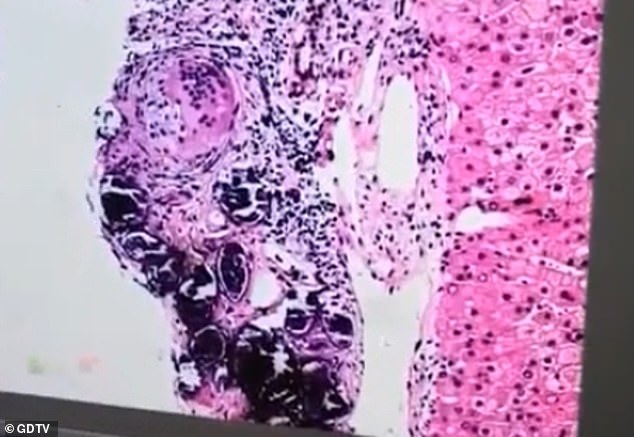 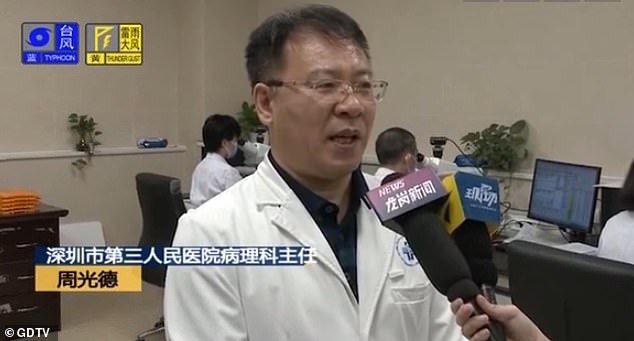 A doctor told the reporter that the patient had likely contracted the worms when he was living in Honghu in central China’s Hubei. The area was an epidemic zone for schistosomiasis

The man, known by his surname He, came to the shocking discovery during medical checkups at The Third People’s Hospital in Shenzhen, southern China’s Guangdong Province.

His doctors explained his case to Guangdong Television Station on Tuesday.

According to the report, Mr He grew up in Honghu in the province of Hubei, and the area was an epidemic zone for a disease called schistosomiasis.

Schistosomiasis is an infection caused by blood flukes which live in freshwater in tropical regions of Africa, South America, the Caribbean, the Middle East and Asia.

A person can become infected when his or her skin comes in contact with polluted water sources. 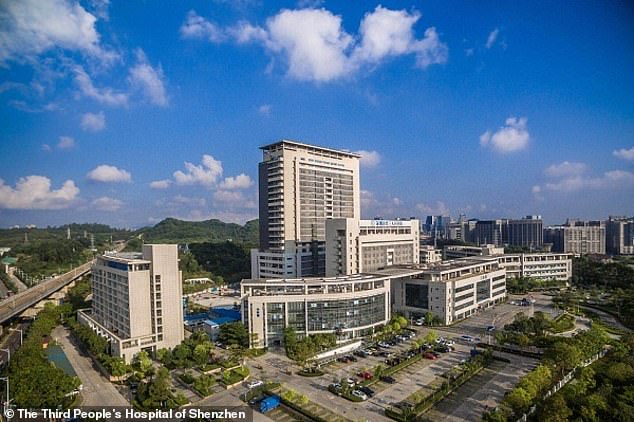 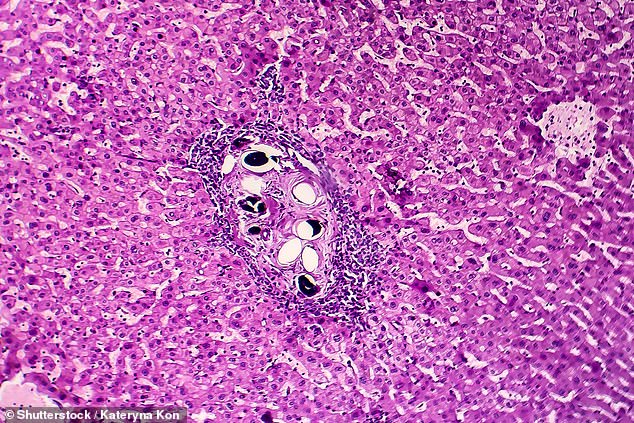 Blood flukes can live and reproduce inside infected humans for decades. The above file photo shows liver schistosomiasis, which is caused by the tropical flatworms, under a microscope

Mr He told the station that he often swam in local rivers when he was young.

Schistosomiasis is an infection caused by a burrowing parasitic worm that lives in freshwater in tropical regions of Africa, South America, the Caribbean, the Middle East and Asia.

Although the infection usually does not cause symptoms at first, it can gradually damage organs such as the bladder, kidneys and liver.

Within a few weeks of infection, people may suffer fever, rashes, diarrhoea and abdominal pain.

In the long term, schistosomiasis can cause organs to become permanently damaged, leading to seizures if the brain is affected, coughing up blood if the lungs are damaged and anaemia if the digestive system was targeted.

It is reported that Mr He’s parents and one of his cousins all have the disease.

The man himself suffers from chronic Hepatitis B, a viral infection that attacks a person’s liver. But he had never been diagnosed with schistosomiasis before the latest examination.

Medical scan results shared by the hospital showed Mr He’s liver covered by dark patches, which suggested the existence of the worm eggs.

Medics said Mr He would need immediate medical attention because his chronic Hepatitis B could make his condition worse.

It is understood that the man is under hospital treatment after being diagnosed with schistosomiasis on August 14.

Blood flukes can live and reproduce inside infected humans for decades, according to a study from the United States.

Dr Phillip Newmark and his team at the University of Illinois discovered the flukes had stem cells which allowed them to keep regenerating their body parts.

‘We started with the big question: How does a parasite survive in a host for decades?’ said Dr Newmark, a professor of cell and developmental biology.

‘That implies that it has ways of repairing and maintaining its tissues.

‘This study gives us insight into the really interesting biology of these parasites, and it may also open up new doors for making their life cycle a lot shorter.’