Cairo: New Kia cars, cases of Heineken beer, live animals and billions of dollars’ worth of crude oil and other commodities remained stranded in the Suez Canal on Saturday as tugboats and dredgers tried to free a grounded container ship.

The Ever Given, one of the largest container ships ever built, has been stuck in the canal since Tuesday, creating an increasingly expensive traffic jam on both sides of the waterway that connects Asia to Europe.

Some tankers have already opted to change course and travel around the southern tip of Africa instead, adding weeks to their journeys and raising fears that the valuable cargo could be an appealing target in a region known for piracy. 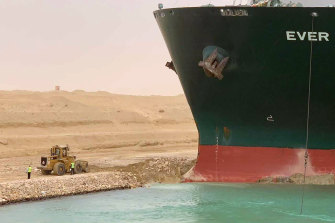 It could take weeks to dislodge the Ever Given in the Suez Canal.Credit:AP

Detouring around Africa is likely to add a week or two to most ships’ journeys, depending on where they were when they changed course.

It will also mean hundreds of thousands of dollars in additional fuel costs, putting ship operators in a difficult place where they’re forced to guess if the extra time and expenditure will pay off.

With more ships potentially being diverted to the Cape of Good Hope, piracy could increase. Pirates have long preyed on ships moving in the waters off the Horn of Africa, and the seas off oil-rich West Africa are now considered among the world’s most dangerous for shipping.

Over the past two days, the US Navy said it has been contacted by shipping firms from multiple nations concerned about the heightened risks of piracy to ships being rerouted, a spokesperson for the US Navy’s Fifth Fleet based in Bahrain told the Financial Times.

At a news conference at company headquarters in Japan, Shoei Kisen President Yukito Higaki said 10 tugboats were deployed and workers were dredging the banks and sea floor near the vessel’s bow to try to get it afloat again as the high tide starts to go out. 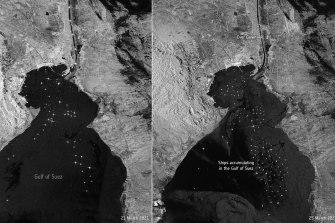 This satellite image provided by The European Space Agency on Friday, March 26, 2021, shows on the left, routine maritime traffic in the Suez Canal with vessels on March 21, 2021 and on the right, maritime traffic backed up on the canal on March 25. Credit:ESA

At least seven tankers carrying liquefied natural gas were diverted, including three steered toward the longer route to Europe via the Cape of Good Hope in southern Africa. Another nine tankers were expected to be diverted if the blockage continues into the weekend. Four long-range oil tankers and three container ships have already changed course for the African route.

The Ever Given, which is operated by Taiwan-based Evergreen Marine Corporation, was headed to Netherlands on Tuesday when it ran aground during a dust storm. Exactly how the stranding occurred remains unclear, but experts have speculated that the containers stacked atop the ship could have acted like a massive sail propelling the boat forward in high winds.

Continued failure to dislodge the ship could become a source of embarrassment for Egypt, where the canal and its pivotal role in global trade is a source of national pride. The country spent $10 billion to widen the canal in 2015, but only in selected areas, and not in the section where the Ever Given ran aground.

With more than 150 other ships stuck in the bottleneck, moving the Ever Given will only create a new set of headaches. Many of those vessels will arrive in European ports at the same time, and find they have nowhere to dock and unload their cargo.

“Once you open the canal, it’s like ketchup out of a ketchup bottle,” Jensen said.