This was odd, because there hadn't been a fire. Or an earthquake. No, the young woman's home had been wheeled away on the trailer where it rested outside a St Louis, Missouri warehouse for home remodelling supplies. 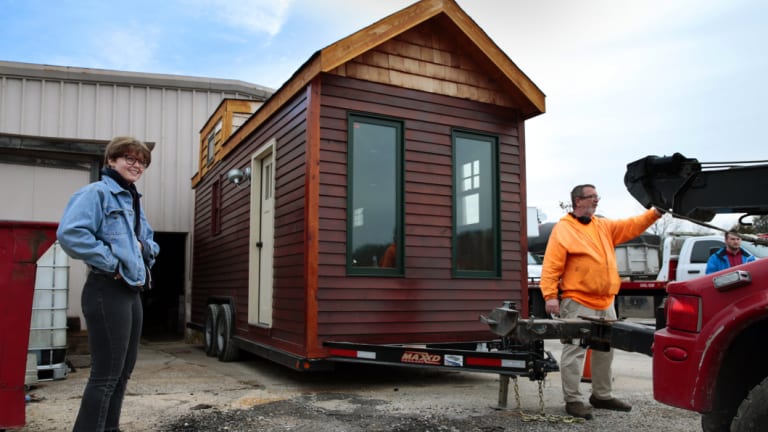 A happy Meghan Panu watches as Mark Ives, owner of Ives Towing, hooks up her recovered tiny house on his Hillsboro lot for its trip home.Credit:SIPA USA

Hers was no ordinary home, with foundations anchoring it in the ground. It was a tiny home. And it vanished over the weekend.

For two years, the recent Webster University graduate had been working on the minimalist accommodation. She had drawn a floor plan, laid sheep's wool insulation and found electric and water sources.

The home rose four metres high, with green windows, a tin roof and stained cedar siding. Construction had cost her about $US20,000.

Panu planned to move in this spring, taking part in the tiny house movement. The architectural and social experiment has gained traction an alternative lifestyle, and also, in some areas, as a quick fix for homelessness.

This has prompted backlash from traditional homeowners who fear the trend will drive down prices, as well as scrutiny from experts who warn that tiny mobile homes – generally 33 to 120 square metres – are insufficient shelter for the vulnerable. 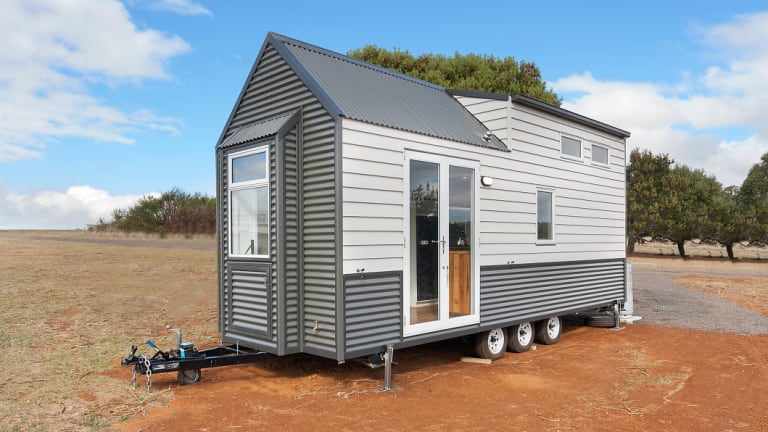 For Panu, building a miniature domicile was an experiment in sustainable living. "My eventual hope would be to participate in the creation of a tiny house eco village," she wrote on Facebook in March.

"Being able to move into my tiny house and reduce my consumption as much as possible is very important to me," Panu told the Webster Journal last year.

The process began in early 2017 with pencil sketches. In February, she acquired a trailer. Panu put out a call on Facebook for warehouse space, but much of the construction proceeded outdoors. The house was framed last winter.

By March, the roof was in place. She prided herself on using recycled materials and completing the bulk of the construction work herself, enlisting volunteers where she could find them, including friends and even her father on at least one occasion.

"Blood, sweat and tears," she wrote in February, uploading a photograph of her bloodied hand. "But mostly blood."

As it took shape, the home had travelled back and forth between St. Louis and Webster Groves, where Panu's university is located. But on Saturday morning, she received a call from the supply warehouse's owner, who had recently invited her to park near his business, Refab.

"He asked if I had moved the tiny house overnight and when I said no, he had the unfortunate news that they hadn't, and it was likely taken," Panu told WTHR, an NBC affiliate.

She put out an appeal on social media. "I NEED YOUR HELP," she wrote on her Instagram page, "St. Louis Tiny Living." Between 10.30pm on Friday and 11am on Saturday, she explained, "the tiny house was stolen."

"I'm at a loss," she continued. "Please, if you see it around the city call and report it."

Her followers came to her defence. "I'm so sorry dude!" one wrote, vowing to "keep my eyes peeled." Another commented: "I'm livid for you." One person simply proclaimed, "WHAT."

And then there was the devoted follower who said she would scour the entire Midwest for the unusual contraband. She was driving from Iowa to Florida, she said, and had taken a screen shot of Panu's house "to keep an eye out while we travel."

In the days that followed, Panu mustered the full sleuthing powers of the internet, crowdsourcing tips on social media and relaying them to her followers as she pressed local businesses for security footage.

"Keep looking, it takes a village," she told her army of amateur detectives, reporting that the house was seen on Saturday morning heading "north down Grand near Russell."

By Sunday, two reports had come in placing the house on I-70, heading West toward Kansas City.

Leads arrived on Panu's Facebook page. A motorist on Route 54 about 160 kilometres west of St Louis said he had spotted what appeared to be her home being towed by a light gray Dodge 3500 diesel pickup truck.

When Panu posted a screen shot of the message on her Facebook page, someone commented to say he had seen the same truck, also with the house, parked near an Iron Skillet restaurant in Kingdom City, Missouri.

On Monday, local media joined the chase. "There are car thieves, package thieves and air conditioning thieves," the St. Louis Post-Dispatch reported. "But St. Louis larceny reached a new milestone Saturday when burglars drove off with a whole house."

She said two men were seen driving a truck with the home hitched on behind. "Could be travelling to Nebraska," she speculated. By Tuesday, clues suggested they were headed in the direction of California.

But still no conclusive leads.

"Thank you all for your continued support, unfortunately I don't have any new information at this time," she wrote on Tuesday.

With little else to say about the heist, she posted photos of the home as it took shape over the summer – a reminder of what she once had.

The Associated Press reported that an anonymous tip had led them to the purloined residence. According to the Post-Dispatch, there was no word on suspects.

"TINY HOUSE FOUND," Panu wrote on Facebook, adding a lighting bolt emoji. She plans to finish the interior before moving in next year.

Today's tiny house movement seeks distance from the consumer economy, but its expansion in the US has also been born of necessity. According to EcoWatch, tiny homes emerged as an "architectural and cultural phenomenon" following the collapse of the housing market between 2007 and 2009.

Now, from San Jose to Philadelphia, communities of tiny houses are emerging as a possible answer to intractable homelessness.

At the same time, the minimalist dwellings have gained a following as a trendy lifestyle choice. Some occupy them full-time, while others position the mobile structures adjacent to a fuller residence and rent out the miniature accommodations on Airbnb.

These are the contradictions that define the movement, said Nancy Unger, a historian at Santa Clara University. "Trendy, trying to live more simply and 'this is all I've got between me and homelessness' – they're all part of this," she told The Washington Post. A headline on the ArchDaily blog had this sinister interpretation: "Tiny Houses: Downsizing the American Dream."

As a serious solution to the absence of affordable housing, Unger said, the movement runs into trouble because it often lacks support from local homeowners, who fear that an influx of tiny dwellings will bring down the prices of traditional homes. There are risks for the occupants, too, chiefly that someone could "make off with the thing in which you have everything invested," she said.